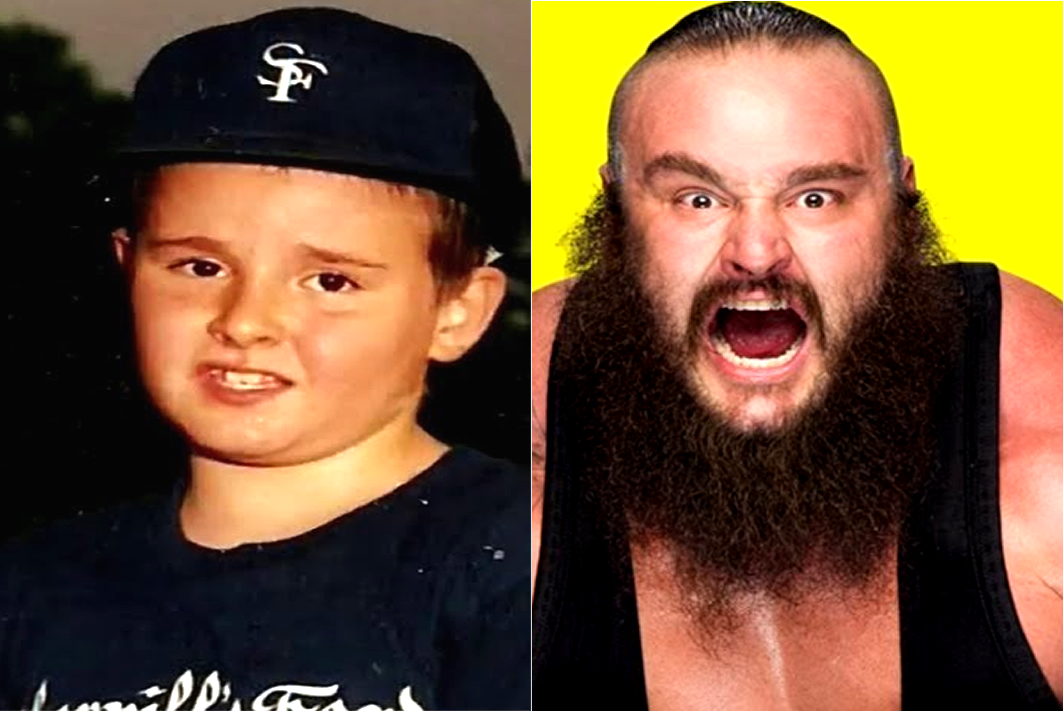 Childhood Biography presents the Full Story of a WWE SuperStar and Former Strongman best known by the nickname “The Monster among Men“.

Our Braun Strowman Childhood Story plus Untold Biography Facts brings you a full account of notable events from his childhood time to date.

The analysis of the WWE Superstar involves his life story before fame and family background. More so, many OFF and ON-Screen little-known facts about him.

Yes, everyone knows he is fast becoming one of the most dominant wrestlers in the WWE. However, only a few consider Braun Strowman’s Biography, which is quite interesting. Now, without further ado, let’s begin.

For Biography starters, Braun Strowman (christened Adam Joseph Scherr) was born on the 6th day of September 1983 at Sherrills Ford in North Carolina, USA. He was born having Blond or fair hair.

Braun was the first child born to a mother of whom little is known about and to his father Rick Scherr (a Slow-Pitch Softball player).

Young Strowman grew up with his younger sister Hannah and sports-loving parents at Sherrills Ford, a town in North Carolina that is best known for being largely dominated by white ethnicity. He grew up collecting the facial copy of his dad.

The youngster who was of the same height as his peers for the better part of his formative years was advised by Rick (his father) to be actively involved in sports.

Reasons for such advice were not far-fetched as Rick, at the time, was just years away from becoming the greatest slow-pitch softball player of all time.

Heeding to his father advice, Strowman picked interest in football, the childhood sport of his peers before progress in education opened a window for other sports. 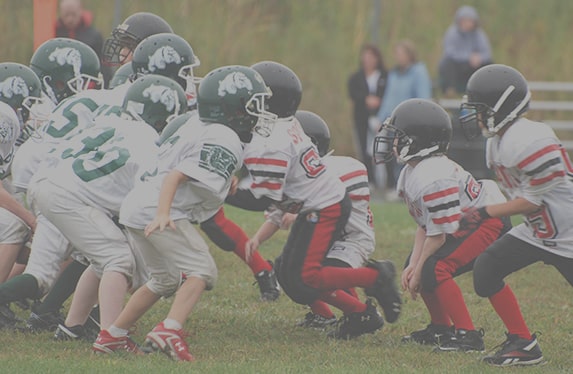 While at Bandy high school, Strowman was a towering figure among students of the institution, standing at a height that was pretty much out of norms for his age.

“You know, I grew up normal until I started high school. 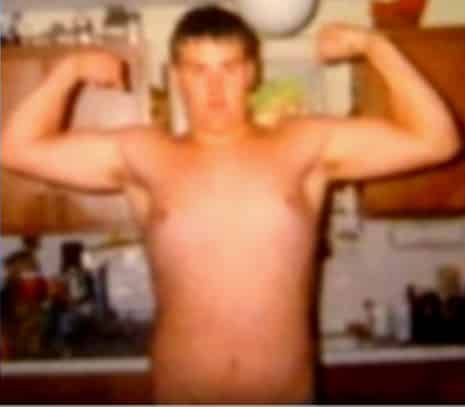 It was at the high school that Strowman honed his skills in football and was involved in wrestling.

He also joined a Track and field team where he served in the capacity of throwing Discus and Shotput.

However, life in high school was not all rosy for the teenager whose academic performance was bedevilled with poor grades until he graduated in 2001 at the age of 17.

Upon graduation, Strowman became clueless at the crossroads of career choice, a development that saw him spend nearly two years doing nothing.

And then I was like, ‘Well, I’m kind of pissing away some talents that I’ve been given; let me get back to football.”

Thus began a journey that saw Strowman spend the next 5 years of his life juggling between playing semi-professional football for the Hickory Hornets and making ends meet by working as a Mechanic and “bouncer” at a nightclub.

Although Strowman was committed to playing football and was once invited to the NFL Scouting Combine in 2007, he was never scouted by any team owing to his lack of college career.

Nevertheless, Strowman was not one to give up on using his body build to seek new career paths. One day, he ran into a couple of strongmen plying their trade at a bar.

The men, sensing that Strowman had what it takes to become one of them, invited the young man who gave the competition a try and got hooked to it. 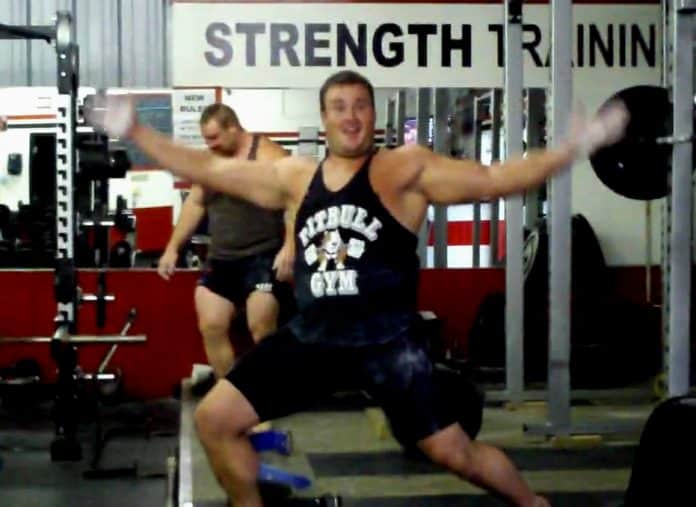 The strongman prodigy would later enter his first competition in September 2009 and turn professional in November 2011.

At the peak of his strongman career in 2012, Strowman recorded a deadlift of 905 pounds and could squat 775 pounds, winning competitions until he had a bicep injury. 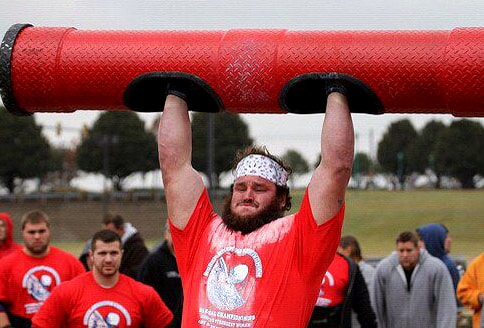 2013 was a decisive year for Strowman who left strongman circuits to begin a career in wrestling.

Although the decision was partly fueled by his bicep injury which saw him lose a strongman competition, Strowman admits that he was convinced by fellow strongman and scout, Mark Henry to sign a contract with WWE.

“Henry took a liking of me and saw that not only did I enjoy my Job as a strongman but had the gift of telling stories that made my fellow strong men laugh. wwe liked that too”. 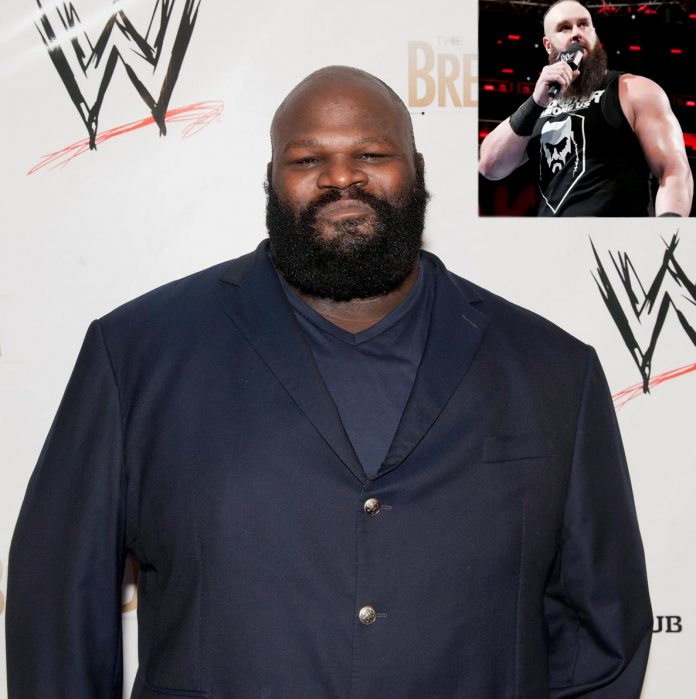 It wasn’t long before Strowman adopted the ring name “Braun Strowman” and recorded a debut victory during a match against Chad Gable in December 2014. 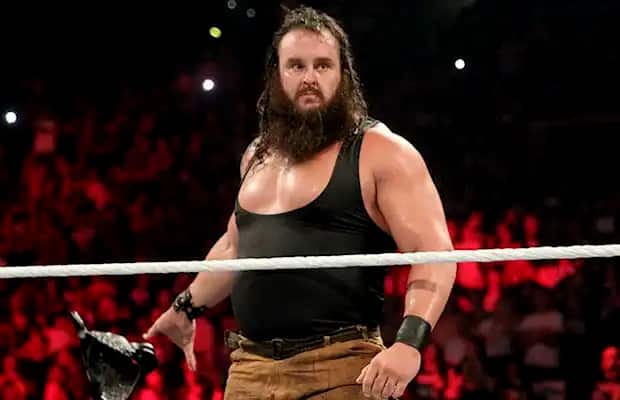 Strowman would thereafter record victory in a match against an unidentified fighter in 2015, make his roster debut in a match against Dean Ambrose and Roman Reigns in that same year, as well as establish himself as the newest member of The Wyatt Family (a formidable wrestling stable in the WWE). 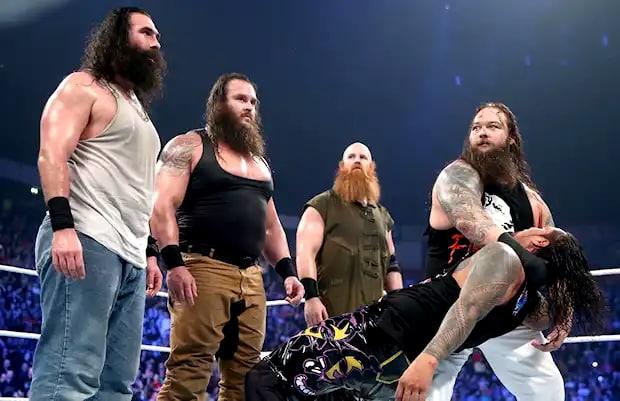 Strowman’s relationship life as at the time of this post is still unsettled. The wrestler who is yet to be married has been linked to having a relationship with his WWE team up, Alexa Bliss. 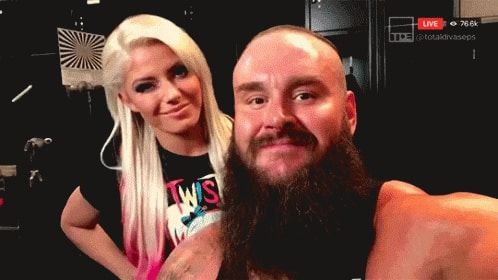 However, the duo are yet to confirm their relationship despite giving hints of close affection.

Asides from Alexa, “The Monster” is yet to confirm his relationship with a certain Kamila Kaine who from indications, seems to be very close to him and calls him by the pet name “MeatCastle”. 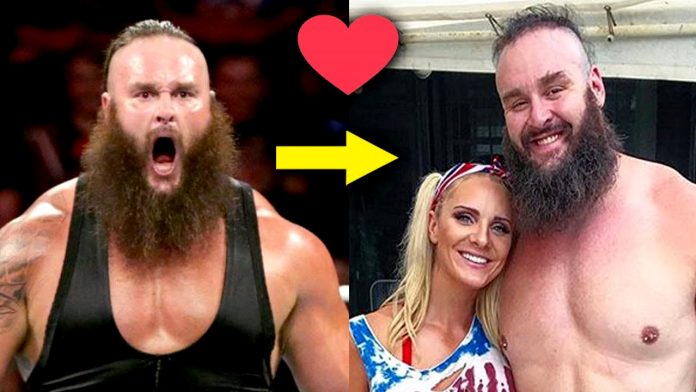 Braun Strowman was born into a family of 4. We bring you factual details about his family.

Strowman’s father Rick Scheer is a former softball player who was nicknamed Crusher for his prowess in the game. 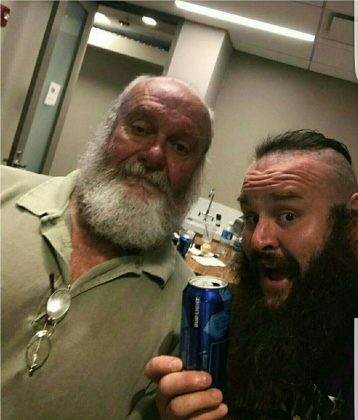 The supportive father who is regarded as one of the greatest softball players holds the record of USSSA All-Time World Series leader in home runs (101), hits (166) and RBIs (202).

Although little is known about Strowman’s mother, she has been of support to her children and a great wife to her husband.

Hannah is Strowman’s sister. The only sibling is almost as tall as her brother and comes off as his biggest fan. 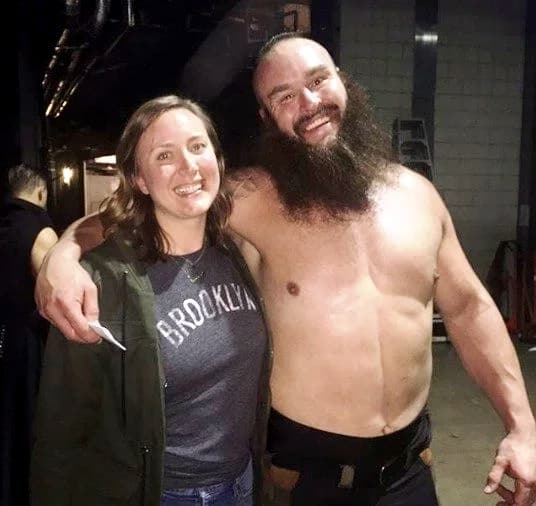 Strowman has a number of nicknames gotten before his career with the WWE and thereafter. As a strongman, Strowman was nicknamed: “Big Country” and “Mansquatch.”

Similarly, his intimidating size and looks earned him “Monster Among Men” and “A Mountain of a Man” in the WWE. 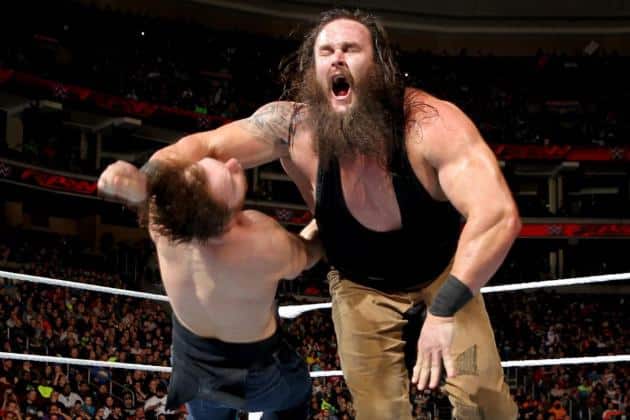 Strowman has a number of body arts, we bring you details about them.

He has Superman’s logo on his right arm and “country strong” written on his left arm. 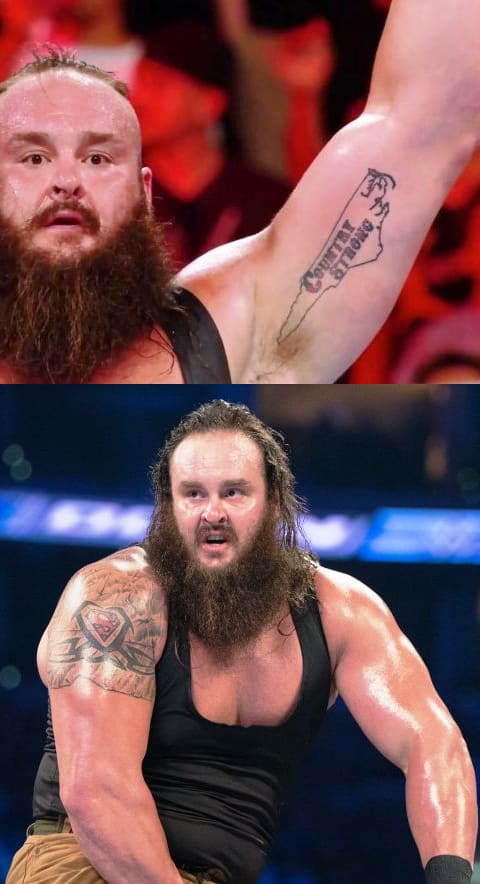 Added to the body arts are his surname “Scherr” Witten on his left bicep and a bodybuilder holding a barbell dumbbell on his ribs. 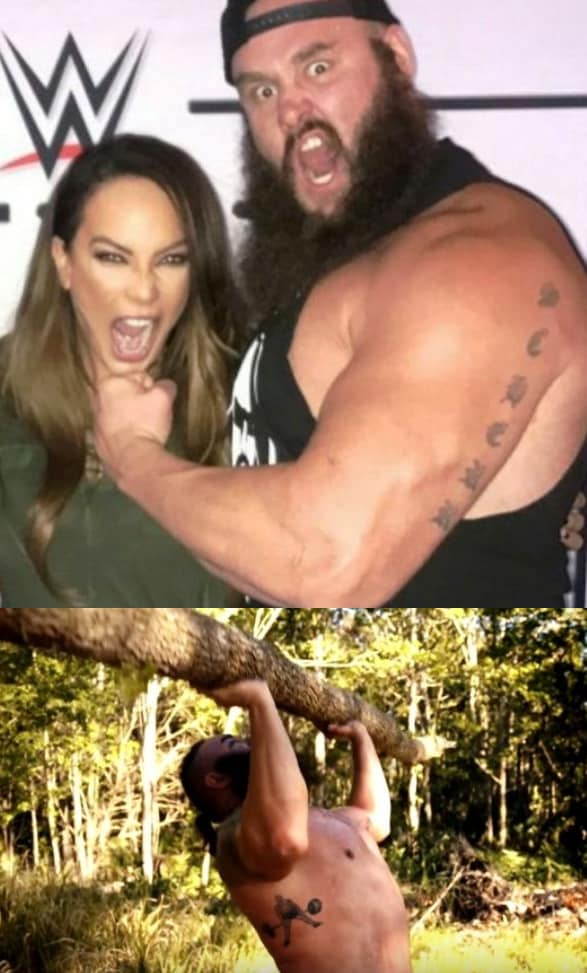 Strowman’s monstrous personality in the ring is nothing to compare with his off-ring relationship with others.

While the “mountain of a man” is well known for his professional bearing, which he mixes with discipline and ambition for career progression.

His comic relief and penchant for keeping open conversations enders him to many who attest of the sharp contrast between his In-ring appearances and off-stage personality. 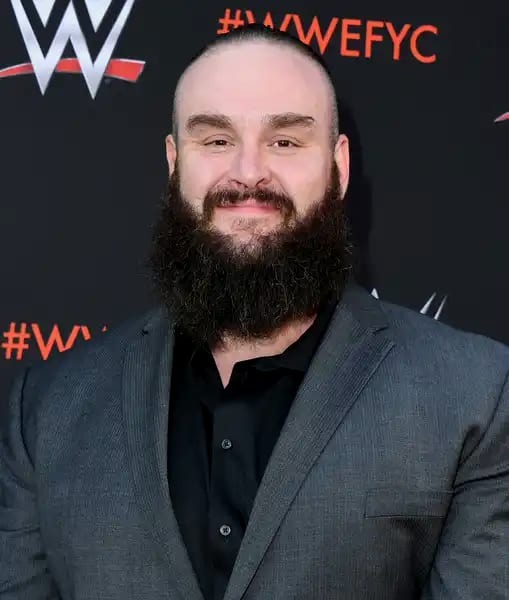 Strowman hates to shave and the last time he did shave was way back in 2011. 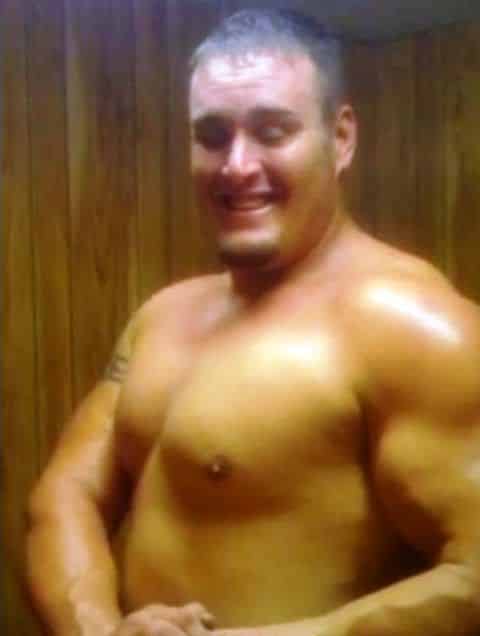 Prior to his WWE career, Strowman was featured in the movie Three Count. The movie never ran in Theatres but can be viewed for free on youtube. 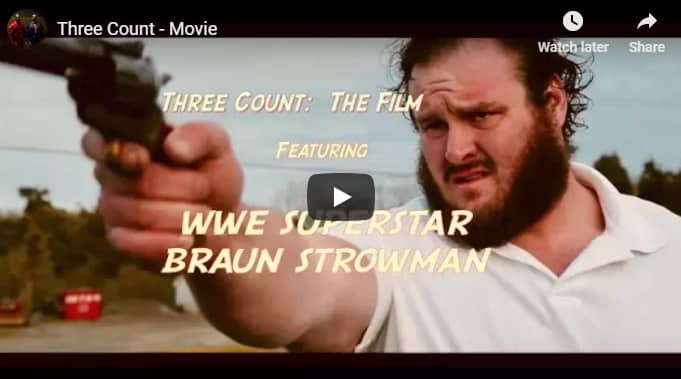 His favourite drink is Monster Energy. 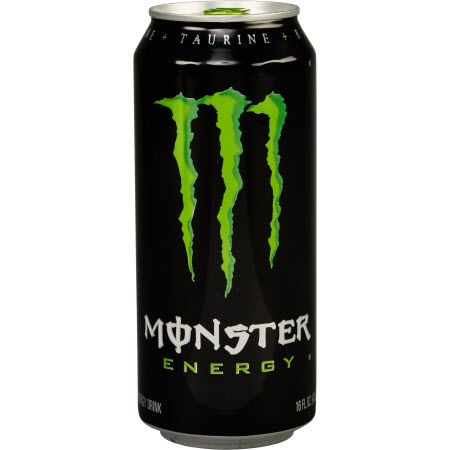 FACT CHECK: Thanks for reading our Braun Strowman Childhood Story plus untold biography facts. At ChildhoodBiography, we strive for accuracy and fairness. If you see something that doesn’t look right in this article, please place your comment or contact us!