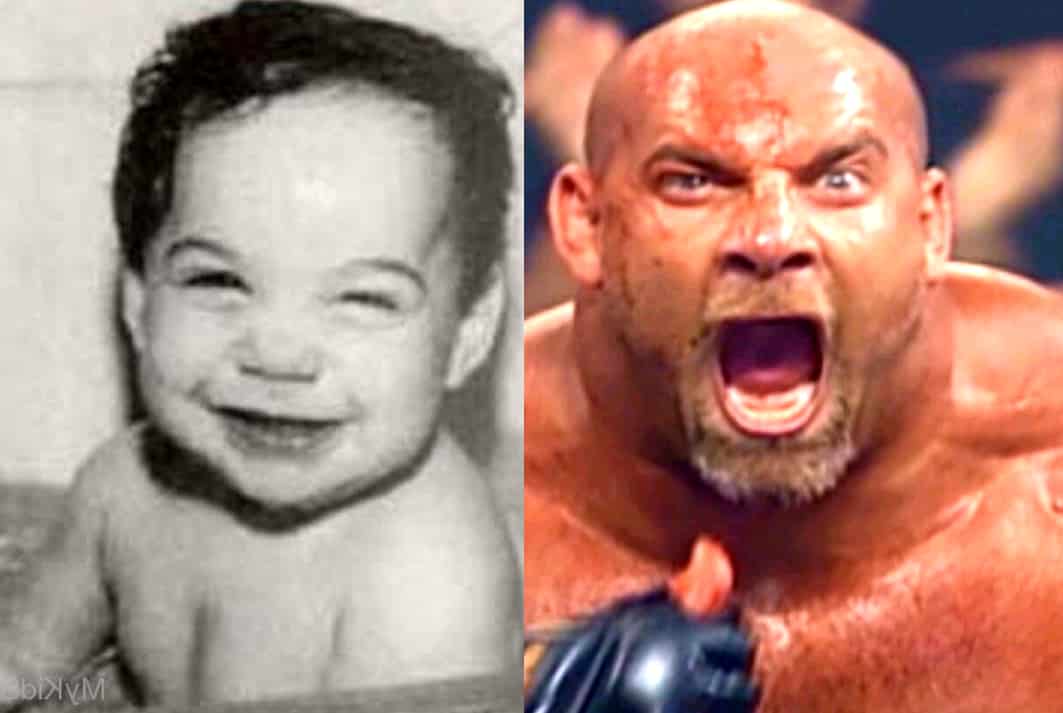 For Biography starters, he bears the nickname “The Myth”.

More so, Bill’s Lifestyle, Personal Life and other notable events right from when he was a child to when he became popular.

Yes, everyone knows he is one of the greatest WWE superstars of all time. However, only a few consider Bill Goldberg’s biography, which is quite interesting. Now, without further ado, let’s begin.

Starting off, William Scott Goldberg was born on the 27th day of December 1966 at the city of Tulsa in Oklahoma, United States.

He is the youngest of four children born to his mother, Ethel Goldberg, and to his father, Jed Edwin Goldberg.

Bill’s American nationality is self-evident, but his Jewish, Russian and Romanian family roots are only known to a few.

Similarly, not many know that young Bill grew up in the city of his birth – Tulsa alongside his three older siblings Steve, Michael and Barbara.

Growing up in Tulsa, young Bill was an athletic kid with a sturdy body build. Due to his build, he had interests in playing American football from an early age and was given to horse riding before he became 5 years of age.

A close study of his early life interests would make one tend to believe that Bill Goldberg’s parents were career-sporting individuals, BUT that wasn’t the case.

Did you know?… Bill Goldberg’s parents were rather super-resourceful individuals whose careers promote good health/safety as well as musical/aesthetical interests. To start with Bill’s dad, he was an Obstetrician and Gynaecologist.

The other of Bill Goldberg’s parents- his mother was a violinist as well as a breeder of flowers (horticulturist).

Thanks to both resourceful parents, Bill grew up in a middle-class family background setting with all the love and dotings deserving of any family’s youngest child. 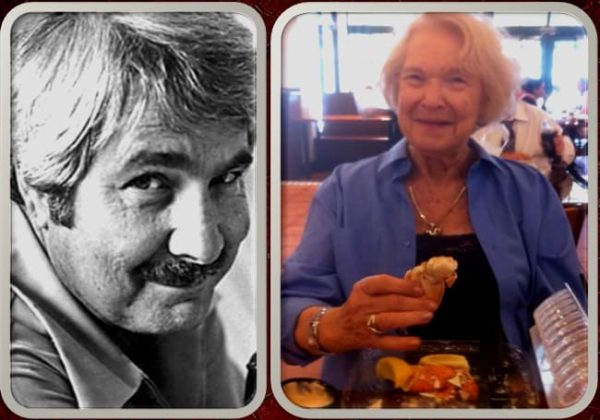 Notwithstanding having a non-sporting family background and being the last child (the baby of the house), Bill grew up in wisdom as opposed to being a spoilt last-born.

Back then, his love for football and quest to receive its education was never known to decline.

By the time Bill was done with his high school education, he got a scholarship to play football for the University of Georgia Bulldogs football team.

It was not long before Bill became eligible for the 1990 NFL draft and was taken by the Los Angeles Rams.

Bill spent just one season playing for Los Angeles Rams before moving on to have a stint with CFL Sacramento Gold Miners and Atlanta Falcons all between 1992-1994. 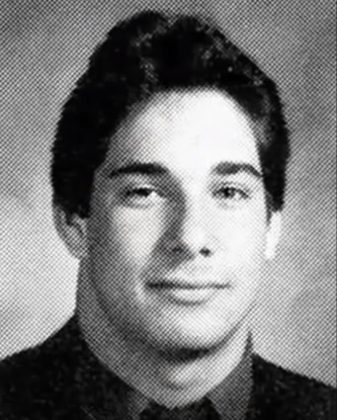 While with Atlanta Falcons, Bill got an injury that “tore his lower abdomen off his pelvis”. As such, he spent several months recovering.

Sadly, Bill wasn’t a major asset to Atlanta Falcons. Thus, they cut him off from the team.

Moving on, Bill fell back on powerlifting and training in mixed martial arts before two professional wrestlers (Lex Luger and Sting) saw and gave him an invitation to begin training in Wrestling. Thus, began Bill’s career buildup in Wrestling.

When the time was right, Bill made 5 impressive pre-televised appearances in the World Championship Wrestling (WCW) under the stage name “Bill Gold”. He then went on to make his professional debut in the September 22, 1997 episode of Nitro.

Thereafter, it was wins after wins for the then Wrestling prodigy whom WCW began to simply refer to as “Goldberg” by mid-March of 1998.

At the peak of his winning streak, Bill did well to clinch victory over Raven to win the United States Heavyweight Championship. 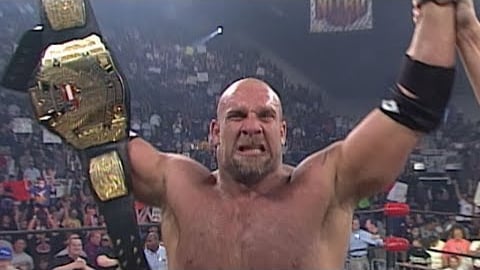 It wasn’t long before he became a contender for the WCW World Heavyweight Championship. To the amazement of fans, he won the title by defeating Hulk Hogan in July 1998.

Sadly Bill Goldberg’s winning streak was brought to an end at an official count of 173–0. Notwithstanding, he did manage to win titles afterwards.

They include his second WCW United States Heavyweight Championship title as well as WCW World Tag Team Champion title with Bret Hart before WCW’s closure in 2001.

Following WCW’s closure, Bill began Wrestling for the All Japan Pro Wrestling in 2002 and had significant successes that made WWF (now WWE) begin contract negotiations with him.

Upon signing up with WWE, Goldberg had a winning feud with The Rock and went on to have another streak of wins.

He soon began a rivalry with Triple H, challenging him for the World Heavyweight Championship but lost out in August 2003. 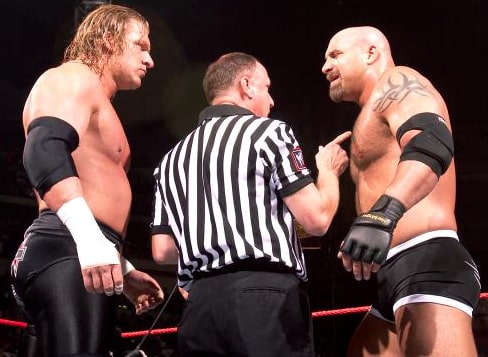 Not one to give up, he gave the challenge another trial in just a few days and became World Heavyweight Championship with a not too impressive reign of 84 days.

Fast forward to the time of writing this Bill Goldberg’s Biography, he has really done well to become a two time WWE Universal Champion.

He first won it by defeating Kevin Owens in 2017 after being away from WWE for 12 years. The second time, he won the title was by defeating Bray Wyatt in February 2020. 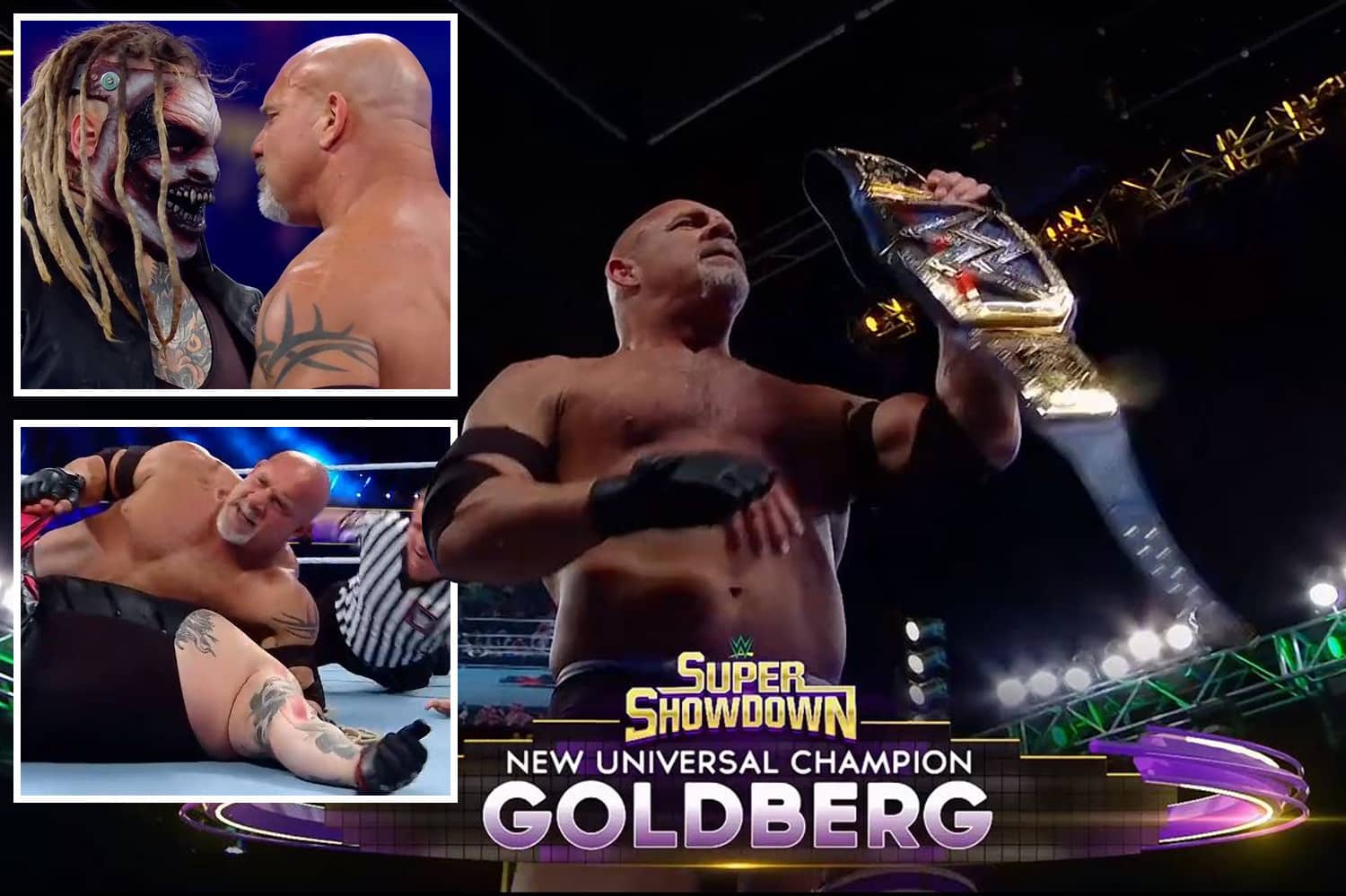 With this Victory, Bill became the first wrestler to win a world championship after induction into the WWE Hall of Fame. The rest, as they say, is history.

Moving on to Bill Goldberg’s love life, he is in a happy marital relationship with his former girlfriend and now wife- Wanda Ferraton.

The love birds began dating in 2005 after meeting on the set of the movie – Santa’s Slay (yes, acting is one of Bill’s careers).

Wanda was Bill’s girlfriend for just a few months before he made the decision to tie the knot with her on the 10th of April 2005. 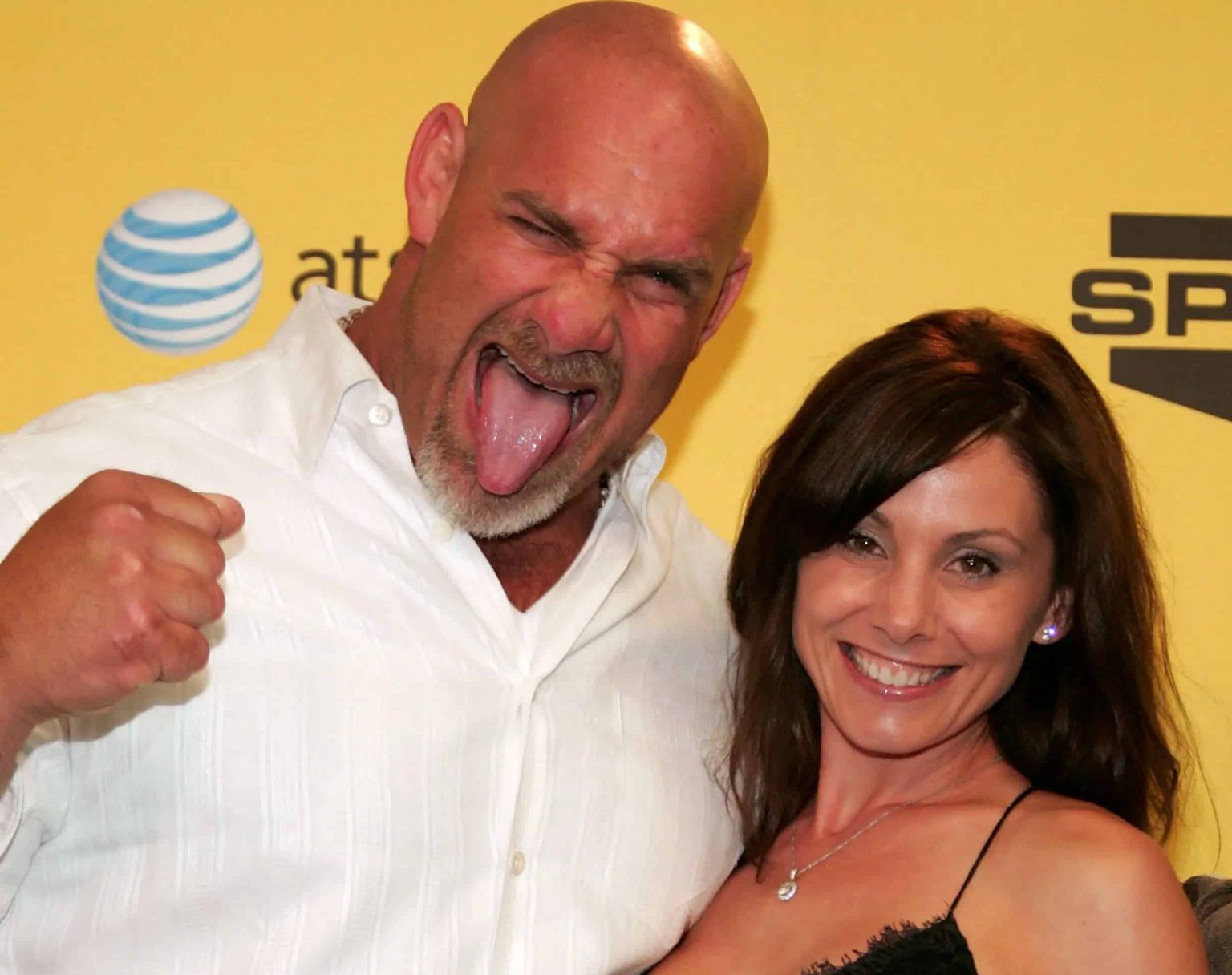 Prior to their meeting, Wanda had a boyfriend while Bill had his girlfriend but they forewent the relationship just to become husband and wife. The couples union is blessed with just one son – Gage A. J. Goldberg (born May 10, 2016).

Following his dad’s footsteps, Gage wants to be a wrestler. However, Bill forbids it. He rather prefers that the youngster make a career out of playing American football in order to help him re-live his childhood dreams. 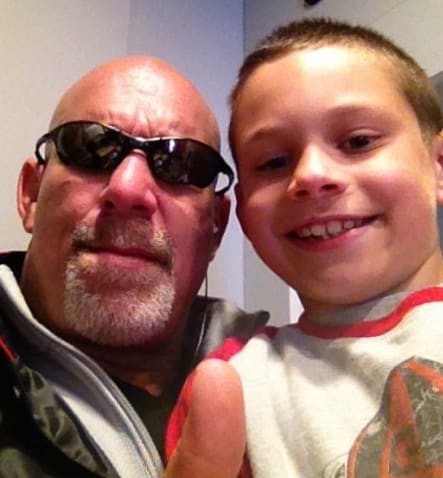 Family is not just important to Bill Goldberg, it is everything to the wrestler. In this section, we’ll bring you more facts about members of Bill Goldberg’s family members starting with his parents.

Bill’s dad, Jed Edwin Goldberg, was born on the 16th day of June 1924. He was a medical practitioner with a speciality in Obstetrics and gynaecology.

In fact, Jed is known to have seen to the safe delivery of no fewer than 10,000 babies before his death in July 2005.

Until his death, Jed was very close to his children particularly Bill who would forever hold him in high esteem. This is regardless of the fact that both parents had split long before his demise.

Ethel Goldberg is Bill’s mom. Not much is known about when she was born but we do know that she is a classical violinist with professional interests in the breeding of flowers.

One of her famous breeds is an award-winning hybrid orchid which she chose to call Goldberg (after Bill). The development goes a long way to underscore the close relationship she has with Bill. 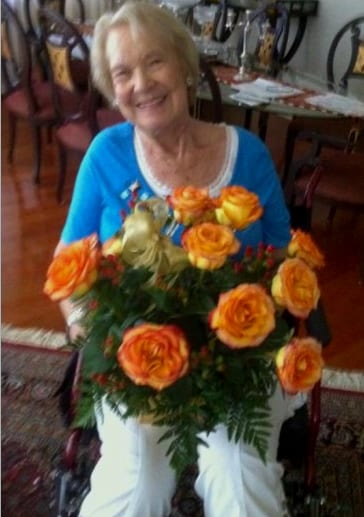 Speak of Bill’s siblings, they are all older than him but not as muscular as he is. We begin with Steve. He was born in 1954 and lives in San Diego where he runs a restaurant business at the time of writing this bio.

Next is Michael who was born in 1949. He owns a music club in Miami, repairs aeroplanes and has interests in sailboats racing.

The only daughter of Bill Goldberg’s family goes by the name Barbara. She lives in California as wife to the award-winning sportscaster/journalist for ESPN – Larr Burnett. 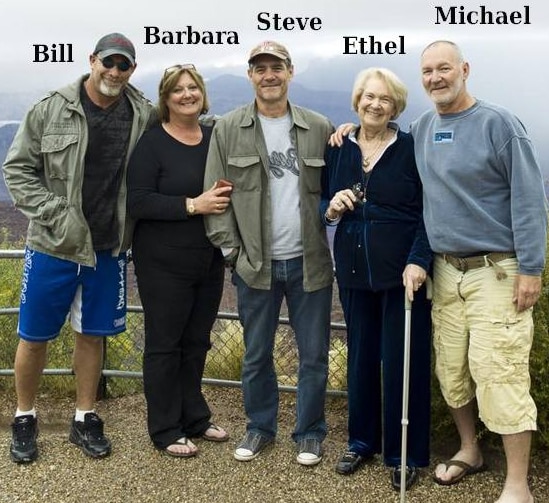 Away from Bill Goldberg’s immediate family, not much is known about his ancestry, particularly his grandparents who have Russian, Romanian and Jewish family roots.

Similarly, there are no records of the wrestler’s aunts, uncles and cousin. The development goes across Broad for his nephews and nieces.

Away from his in-ring endeavours, Bill Goldberg has a huge persona that reflects traits of individuals who uphold Capricorn as their zodiac sign. Truth is, he is practical, analytical, confident, and responsible.

In addition, Bill is adept at public communication and rarely reveal facts about his private and personal life. His interest and hobbies including watching movies, playing American football and spending good time with his family and friends. 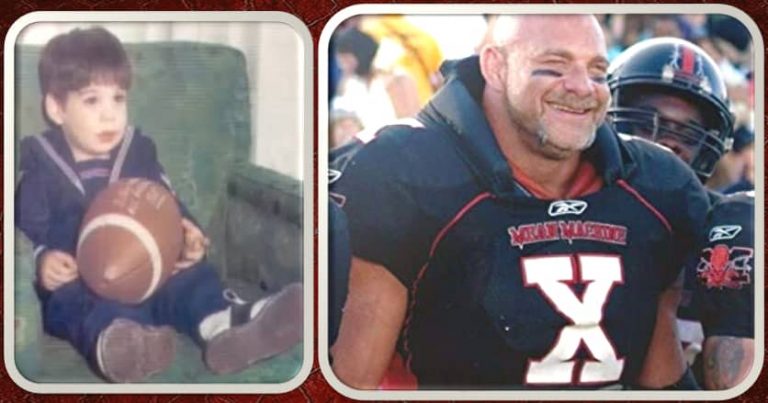 Did you know that Bill Goldberg has a net worth of over $14 at the time of writing this biography? He made the bulk of that wealth through Wrestling, acting movies, serving as a color commentator in mixed martial arts (MMA) as well as endorsing brands.

As a result, he deservingly lives a luxurious lifestyle that is made evident in his possession of a $3.2 million San Diego mansion that sits on over 28 acres of land.

Asides having deluxe rooms and state of the art facilities, Bill Goldberg’s house has a 20-car garage that serves as home to his numerous exotic vintages, convertibles and racing cars. 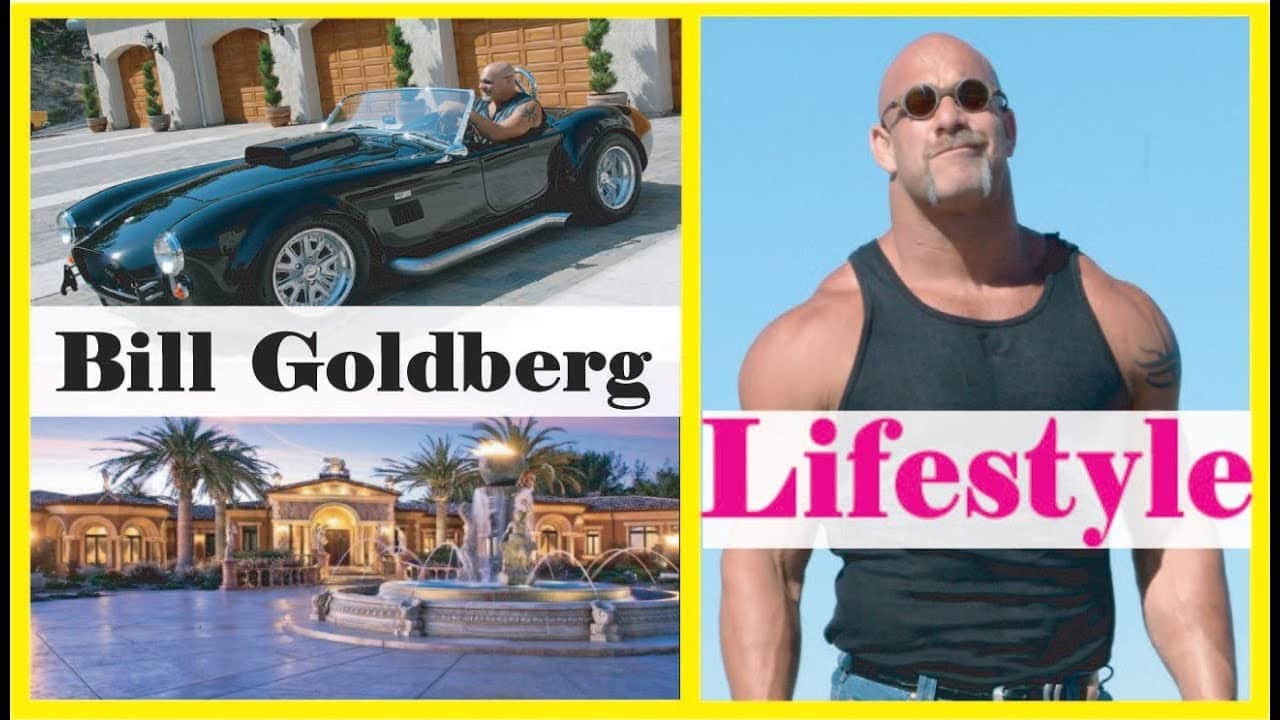 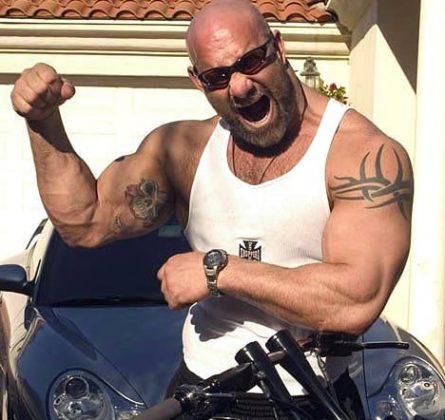 Did you know that Bill Goldberg has just two tattoos or body arts? One of the tattoos is a tribal art and that went on to become his Wrestling logo. The other is a skull on the inside of his right bicep.

What is Bill Goldberg’s Religion:

Bill Goldberg’s parents raised him in adherence to Jewish religious beliefs. This implies he is a practising Jew.

In fact, he is proud of telling the Wrestling world about how much he cherishes his faith in Judaism by not wrestling on Yom Kippur (day of atonement).

Like we gave a hint earlier, Bill is an actor and a TV host that has more than one movie and series appearances to his name.

TV Shows that have hosting history to his name are the Speed Channel Show – Bullrun and History Channel Show Documentary Series – Auto-Maniac. 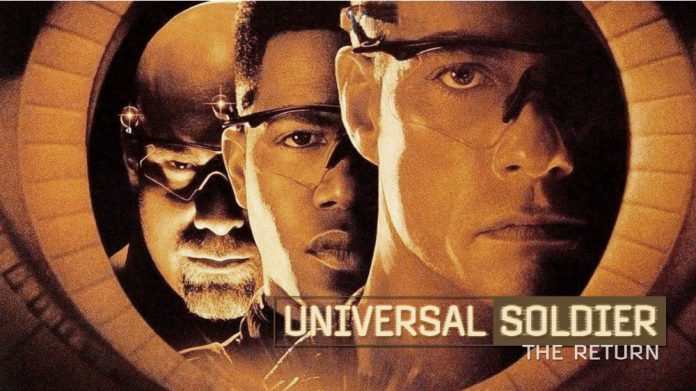 Did you know that Bill Goldberg has one of the least losing ratios in the world of wrestling?

In fact, he has only lost just 5 times in his entire career (as of February 2020) and wrestlers who were successful at defeating him include Bret Hart, Kevin Nash, Triple H, Scott Steiner and Booker T.

About his Spear Move:

We sure know that Bill didn’t invent the spear move, but he arguably does it better than any other wrestler. His opponents don’t like him pulling the move against them but Bill enjoys every bit of it! 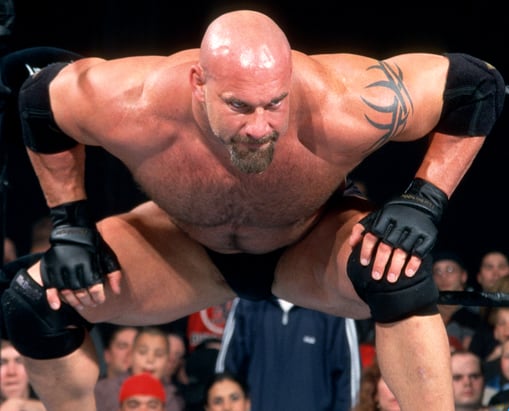 The wrestler is a fan of drinking responsibly and seems not to have a thing for smoking. This lends credence to the fact that he is health conscious and cherishes the art of staying fit.

Let’s not forget that one of Bill Goldberg’s parents (his late dad) was a health professional who forbade the act.

Bill has great love for animals especially cats and he doesn’t eat meat. To fulfil all righteousness, he is an outspoken activist who works with the American Society for the Prevention of Cruelty to Animals. 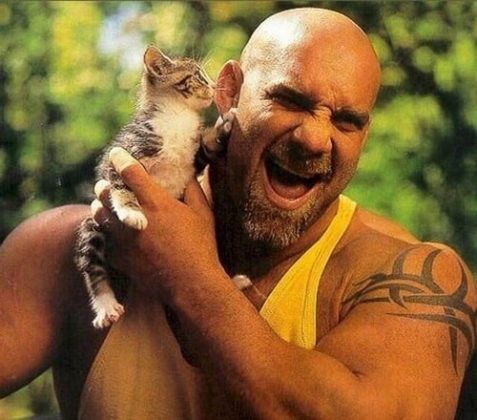 At childhood biography, we strive for accuracy and fairness. If you see something that doesn’t look right in this article, please place your comment or contact us.