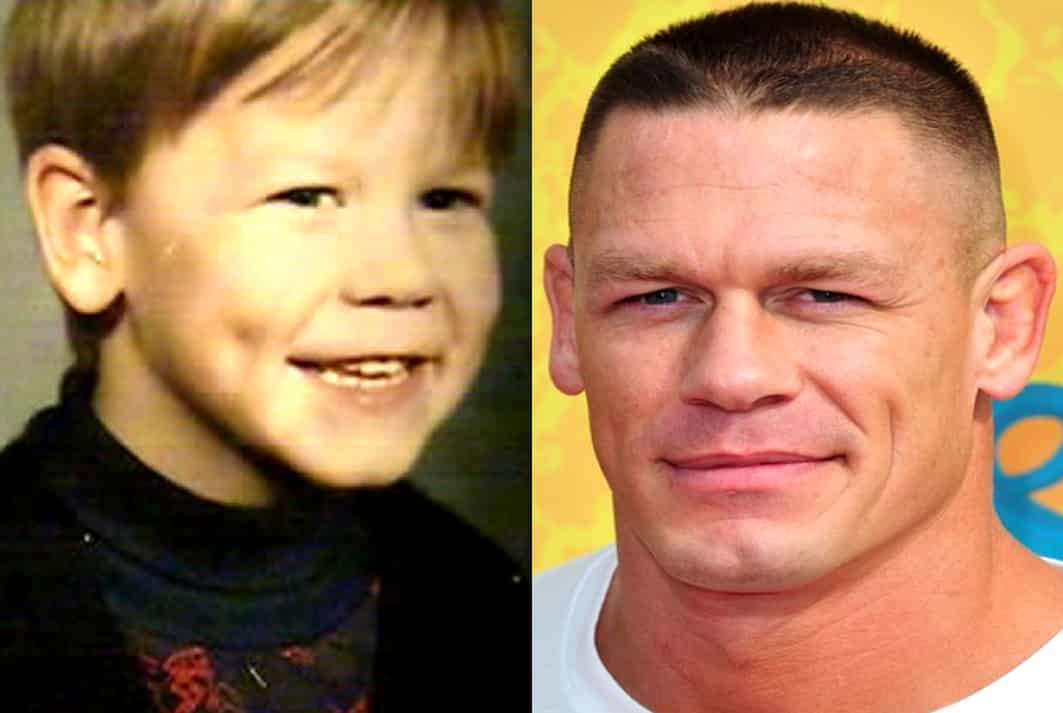 In the nutshell, this is a Life Story of the WWE Legend. Also, to whet your autobiography appetite, We’ll give you a breakdown of John Cena’s Bio. We begin by telling you the events from John Cena’s boyhood days to when he became famous.

Yes, everyone knows about his persevering disposition in the wrestling ring. However, only a handful consider John Cena’s Biography, which is quite interesting. Now, without further ado, let’s begin.

For his Biography starters, WWE Legend, John Cena was born on the 23rd day of April 1977. His birthplace is in West Newbury, Massachusetts, U.S.A.

John Cena was born to his mother, Carol Cena (half English and French-Canadian). And to his father, John Cena Sr. (of Italian descent).

According to John Cena Sr, Baby John’s birth was one of the rare occurrences. Which happen when babies are delivered with an umbilical cord wrapped around their necks. In case you are not aware, Ronda Rousey was also born that way.

This is a scary situation that could likely lead to birth complications. However, John survived birth in one piece. And by extension, he won his first fight in the natural ring.

Speaking of his much later fights in real rings, it was an acquired taste for Young John. As his father’s favourite activity was taking his sons to watch wrestling. Back then, people call it the World Wrestling Federation Matches at Boston Garden.

Although Young John enjoyed the fights and mimicked WWF stars (as pictured below), he had no aspiration of being involved in a live contest.

His lack of interest in the sport made him differ from John Cena Sr, who did not only loved wrestling but wanted to be a part of the action.

Schooling played its role in exposing Young John, who was raised Catholic to aspirations other than wrestling.

On completion of his basic education, he was enrolled in  Central Catholic High School in Lawrence, where he developed an interest in Baseball.

Thereafter, he was transferred to a boarding school, Cushing Academy, where he did not only developed skills in Baseball but was in search of a higher purpose that best suits his aggressive nature. 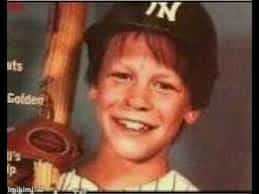 To that end, Young John secured enrollment into Springfield College in Massachusetts.

There, he did not only acquire a degree in studying how to harness his aggressiveness to healthy endeavors (exercise physiology) but was greatly involved in the college football team as pictured below (3rd from left at 2nd row).

In addition, he steadily developed a passion for bodybuilding.

Fresh out of college in 1999, John’s survival instincts kicked in alongside a strong desire to become someone. Consequently, with just $500 in his pocket, he set out for California to pursue his passion for bodybuilding but went broke two weeks after. 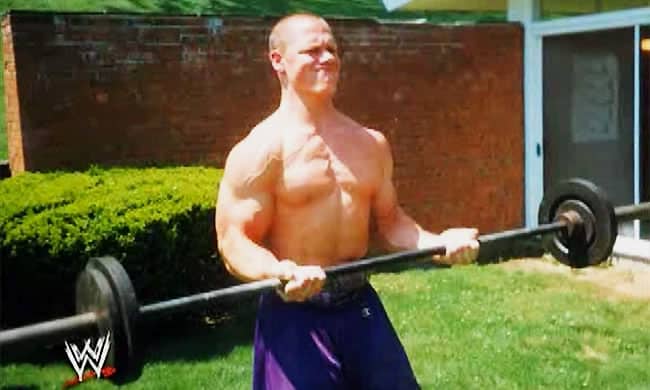 His dwindled finances made him consider earning a living by taking up a job at the store area of the famous Gold’s Gym in Venice where Arnold Schwarzenegger used to have workouts during his prime.

It was at the same Gym young John met a bodybuilder who talked him into taking training at Ultimate Pro Wrestling (UPW), a former World Wrestling Entertainment developmental company.

After a series of training at the Ultimate Pro Wrestling (UPW), John was given an in-ring role which saw him assume a semi-robotic character known as The Prototype and clinched the UPW title in 2000. 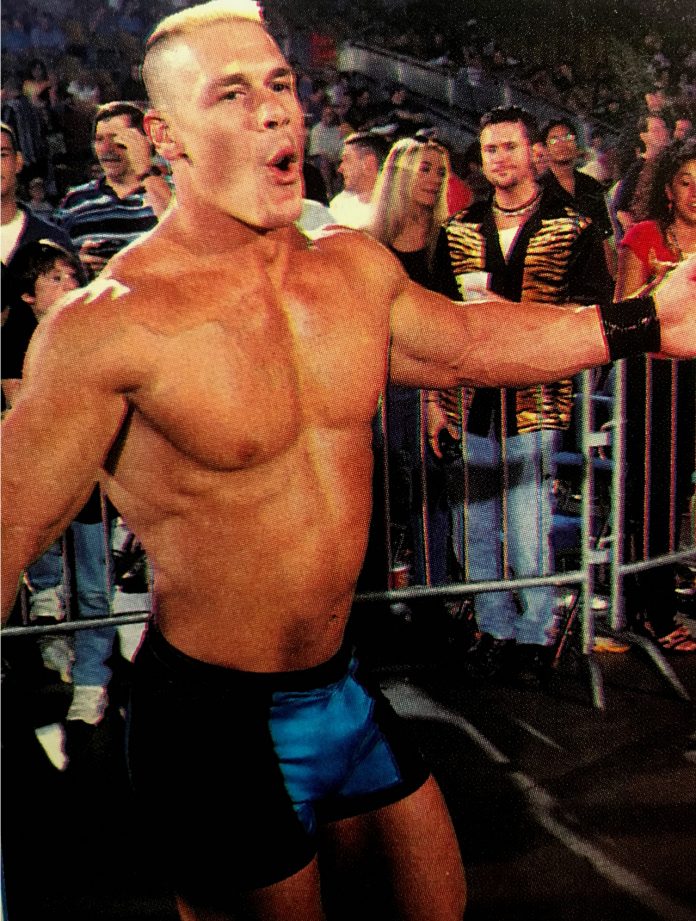 In the year 2001, he signed a contract to work at Ohio Valley Wrestling where he captured the OVW heavyweight title in February 2002, before making his WWE debut that June.

Two years later, he took the United States Championship. Since then he has notched many wins and titles as well as made his father become a part of the action he always wanted. The rest as they say is history. 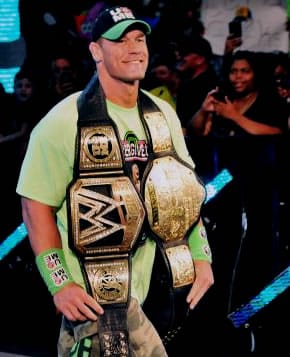 Between the years 2002 to 2018, John had stints with a number of interesting female personalities including, American Wrestlers;  Mickie James, A.J. Mendez, Lisa Marie Varon and Barbie Blank.

Indeed, John is one who not only loves his career but knows how to have a fling with his female professional counterparts. 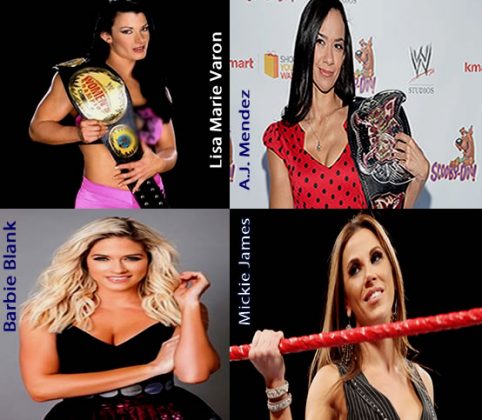 His career-centred life led to the fallout of his first marriage to his High school sweetheart and not so aggressive ex-wife, Elizabeth Huberdeau. All seemed well before and after their marriage (held on the 11th of July 2009). 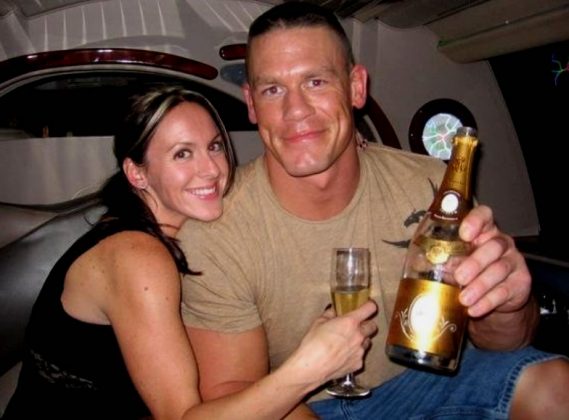 However, the couple filed for divorce three years later, In May 2012, which was finalized in July 2012.

Commenting on the reasons behind the divorce, John subtly revealed that his loss at the WrestleMania at the hands of The Rock accelerated processes that led him to file for divorce from his first wife.

“That match sent my life into a tailspin, both professionally and personally, because I could not get over my obsession with the fact that I had failed,”

John moved on that same year to a career-centred relationship with another female professional counterpart, Nikki Bella whom he had gone down on one knee and proposed to after Wrestlemania 33.

At the time of this post, Nikki and John are engaged and would be married soon though the exact wedding plans are unknown. 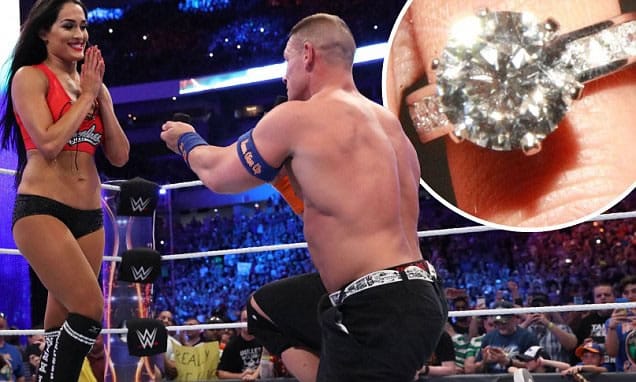 John Cena was raised catholic in a family of 7. Sit back as we bring you factual details of his family.

John experienced a much closer bond with his father when he resolved to build a career in wrestling. The two have been close ever since and support each other.

At some point, John designed a health plan to help his father lose 50 pounds of weight.

John’s mother; Carol Cena, is of half English and French-Canadian ancestry. Although she did not fancy the idea of John becoming a professional wrestler, she, however, supported him and they got along well. 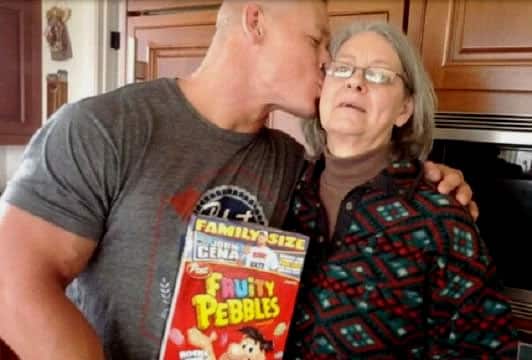 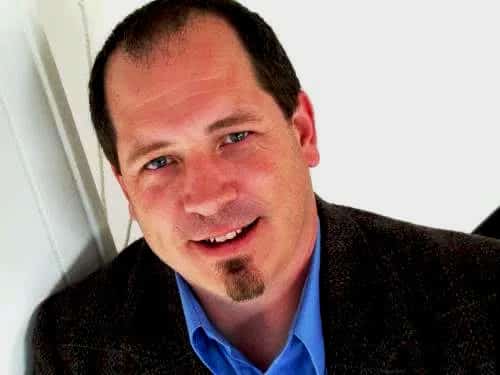 Matthew Cena is John’s younger brother as well as a bodybuilder. He attempted to tread the path of John by giving wrestling a shot but was unsuccessful at it. 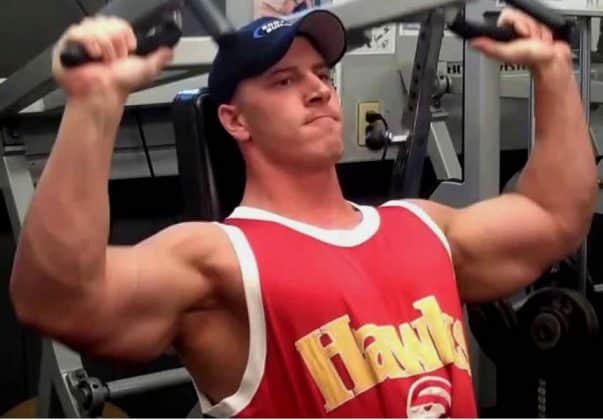 Others: The rest of John’s younger siblings (brothers) include Daniel Cena and Sean Cena. There’s really been not much information about the duo who have decided to live private lives. 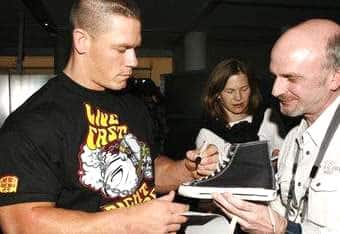 READ:
AJ Styles Childhood Story Plus Untold Biography Facts
Thanks for reading our John Cena Childhood Story plus untold biography facts. At ChildhoodBiography, we strive for accuracy and fairness. If you see something that doesn’t look right in this article, please place your comment or contact us!