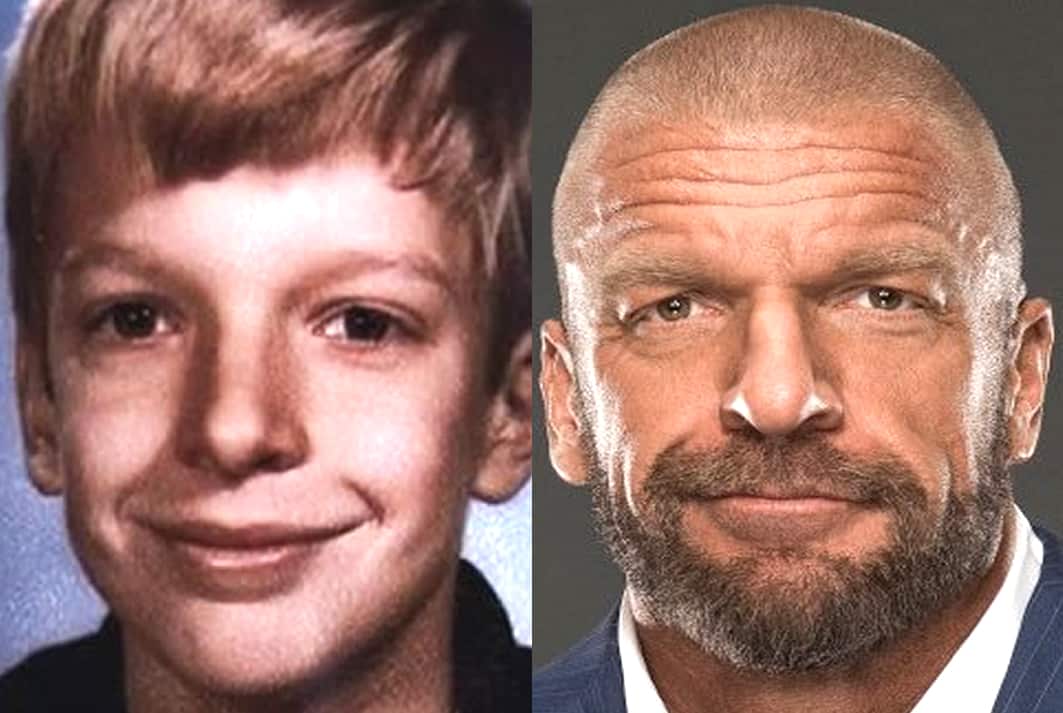 Our Triple H Childhood Story Plus Untold Biography Facts brings you a full account of notable events from his childhood time to date.

The analysis of the WWE COO involves his early life, family background, life story before fame, rise to fame story, relationship life, personal life, family facts, lifestyle and other little-known facts about him.

Yes, everyone knows he is one of the best-known faces in pro wrestling.

However, only a few consider Triple H’s Biography, which is quite interesting. Now, without further ado, let’s begin.

Starting off, Triple H, (Christened Paul Michael Levesque) was born on the 27th day of July 1969 at Nashua in New Hampshire, United States.

Triple H’s parents consist of his mother, Patricia Levesque and to his father, Paul Levesque Sr. Both are pictured here.

The American national of white ethnicity with French-Canadian roots hail from a middle-class family background and was raised in his hometown (Nashua) where he grew up alongside his older sister, Lynn.

Growing up in Nashua, young Triple H did not experience hardship as most wrestlers did in their early life. He was rather a happy kid who grew up as a devoted fan of televised wrestling.

The origin of Triple H’s interest in wrestling dates back to when he watched a televised match of Chief Jay Strongbow at the age of five. The wrestling prodigy loved the sport and sustained his interests in it over the years.

Triple H’s educational background comprises of his studies at Nashua South High School. While at the school he played baseball and basketball as childhood sports.

Triple H was still studying at the school when he decided to become a bodybuilder.

Reasons for the decision was not unconnected to the fact that the youngster had made up his mind to become a wrestler.

Thus, he turned to bodybuilding to help him look like the professional wrestlers he watched on television.

Upon graduating from high school in 1987, a young and ambitious Triple H entered bodybuilding competitions and won the ‘Mr. Teenage New Hampshire’ title when he was aged 19, in the year 1988.

Thereafter, the wrestling enthusiast took up a job at Gold’s Gym in Nashua, where he met Ted Arcidi, a former wrestler and power lifter.

Arcidi got to know about Triple H desire to become a wrestler and introduced him to legendary wrestler turned instructor, Walter ‘Killer’ Kowalski.

The youngster trained at Walter ‘Killer’ Kowalski training school in Malden, Massachusetts in early 1992 and made his debut for Kowalski’s promotion – the International Wrestling Federation (IWF) – on March 24th 1992 using the stage name Terra Ryzing.

His early achievements at the promotion include defeating a certain Mad Dog Richard to win the IWF Heavyweight Championship.

Thereafter, Triple H wrestled for various promotions on the East Coast independent circuit and went on to have a one year stint with World Championship Wrestling (WCW).

Moving on, Triple H took a close a step closer to fame by getting signed to WWE (then World Wrestling Federation WWF) in 1995.

He adopted the stage name “Hunter Hearst Helmsley” and went on to win the Intercontinental Championship by defeating Marc Mero on October 21, 1996.

Although Triple H was good at winning matches, he found it difficult to maintain a long title reign, a challenge that saw him lose titles a few months after securing them. Added to the challenge was recurrent injuries which sidelined him for months.

1999 to 2002 were years that brought and kept Triple H’s in the limelight. He began by entering a feud with Vince McMahon whom he defeated at Armageddon as well as earned the nickname ‘The Game’ and ‘The Cerebral Assassin’ in 2000.

At the peak of his career within the period Triple H won the WWF Tag Team Championship for the first time with Stone Cold and Mr McMahon.

He achieved his next set of major breakthroughs by winning the 2002 Royal Rumble and defeating Chris Jericho to win an Undisputed WWF Championship title. 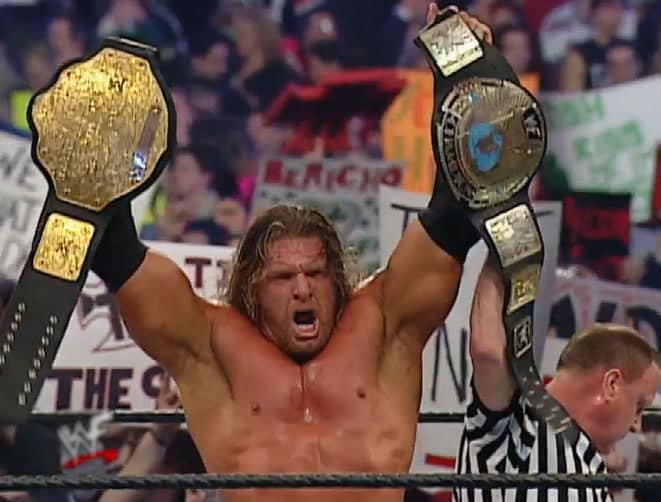 Triple H is a Married man at the time of writing. We bring details about his dating history, failed marriage and present relationship status.

The Wrestler started out by dating Joanie Laurer, better known as Chyna in 1996. The ex-lovebirds stayed together for 6 years before bringing their relationship to an end.

Chyna was not interested in having children at the time thus no son(s) or daughter(s) was born of their relationship.

Next was his affair with Stephanie McMahon, the daughter of Vince McMahon, CEO of WWE. The couples were romantically involved in each other during the early 2000s and went on to get married on the 25th of October 2003.

Triple H was born into a lower-class family of 4. We bring you factual details about members of his family.

Paul Levesque Sr is Triple H’s dad. The loving and supportive father has French ancestry. He has been of great support to Triple H’s career and ranks among one of the wrestler’s biggest fans.

Patricia Levesque is Triple H’s mom. The loving mother who has Canadia origins is one of the closest persons to Triple H’s heart and supports his endeavours.

Triple H has no brother but a sister simply known as Lynn. Little is known about Lynn other than the fact that she grew up with Triple H and shares a close bond with him till date.

Away from Triple H’s immediate family, his paternal grandparents were Leo Levesque and Claire Desjardins while little is known about his maternal grandfather and grandmother.

Meanwhile, his aunts and uncles are yet to be identified with him, The same goes across the board for his cousins’ nephews and nieces.

What makes triple H tick? sit back as we bring you makings of his personality to help you get a complete picture of him. To begin with, Triple H persona is a blend of Leo Zodiac personality traits.

He is an energetic planner and leader who passionately pursues his ambition. His hobbies spending time with his family and exercising. Triple H also has interests in American football, baseball and basketball.

Although Triple H has an estimated net worth of $35 million, he is not one to live a showy lifestyle. The wrestler’s residence in Weston, Connecticut (CT) is almost secluded from boisterous neighbourhoods.

Notwithstanding, he has cars that speak well of the corporate roles he plays in WWE. The automobiles include a Mercedes Benz SL-Class, a Cadillac Escalade and a BMW M760 LI sport.

Triple H is one among a minute number of wrestlers who have no tattoos or body arts as at the time of writing.

He is the brains behind the elimination chamber as well as the founder of NXT and majority shareholder of the program. He is also the Executive Vice President of Talent, Live Events and Creative for WWE as at the time of writing.

Regarding his religion, Triple H was born and raised as a Christian. Although he believes in God, Triple H is not too religious and loves to keep matters of his faith private.

At childhood biography, we strive for accuracy and fairness in delivering the Biography of WWE Stars for you. Kindly stay tuned for more WWE Childhood Biography stories. That of Bianca Belair, Bill Goldberg, and Bray Wyatt would interest you.