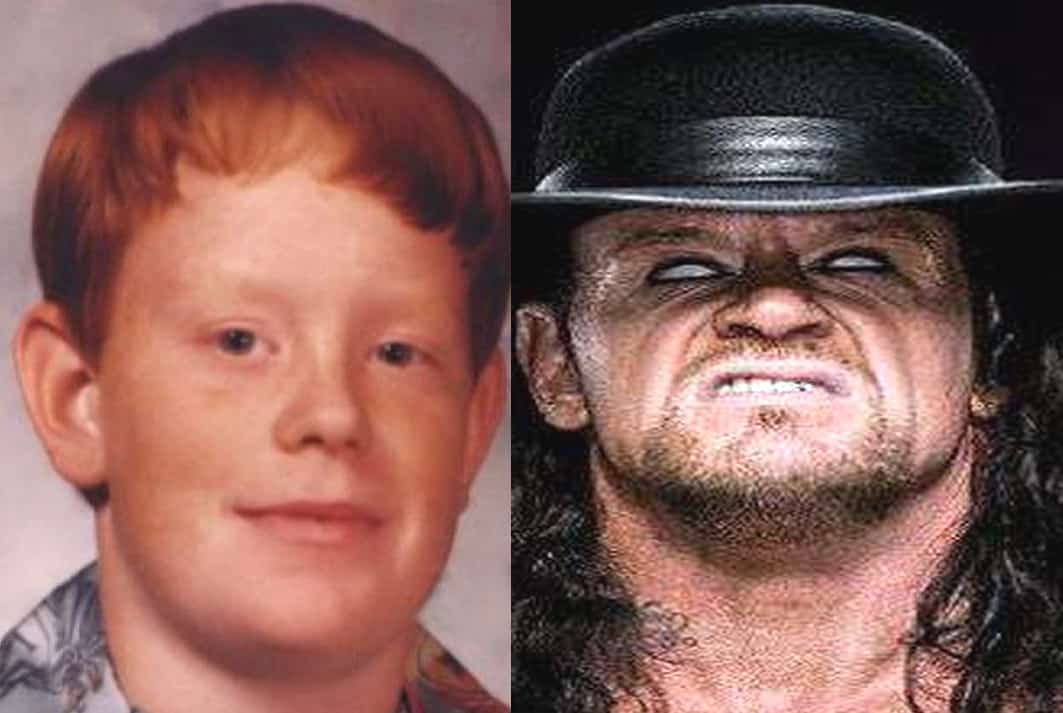 Childhood Biography presents the Full Story of a WWE Legend with the nickname; “The Phenom” and real names; “Mark William Calaway”.

The Undertaker Childhood Story plus Untold Biography Facts brings you a full account of notable events from his childhood time to date.

The analysis of the WWE Legend of Houston origin involves his early life, life story before fame, family background and personal life. More so, other OFF and ON-Screen little-known facts about him.

Yes, everyone knows he is one of the greatest professional wrestlers of all time. However, only a few consider The Undertaker’s biography which is quite interesting. Now, without further ado, let’s begin.

Mark William Calaway (The Undertaker) was born on the 24th day of March 1965 in Houston in Texas, USA.

The Undertaker is the youngest of five children born to his mother, Betty Catherine Truby and to his father, Frank Compton Calaway.

Young Calaway was raised by his parents in Houston, Texas where he grew up alongside his four older brothers: David, Michael, Paul, and Timothy.

Growing up in Houston, Calaway was an athletic kid who was doted by his parents and had the loving protection of his brothers.

The wrestling prodigy recorded active participation in sports like football and basketball which he played with peers in his neighbourhood and perfected during his high school and tertiary education.

Calaway was enrolled at Waltrip High School in Houston, Texas. While at the school, he was an active member of the school’s football and basketball teams until his graduation in 1983.

His records with the school’s basketball team secured him a scholarship to Angelina College at Lufkin, Texas.

Calaway studied at the college for a short time before progressing to Texas Wesleyan University.

It was at the university that Calaway majored in sports management and played basketball for the university’s team – Rams between 1985-1986.

An ambitious Calaway soon dropped out of the university in 1986 with the intention of making a career out of sports.

He considered playing basketball in Europe before committing to professional wrestling, a sport he was already engaged in from 1984.

Calaway made his wrestling debut in 1984, a year after he graduated from high school in 1983.

He wrestled for World Class Championship Wrestling (WCCW) and affiliate promotions under the ring name Texas Red for four years.

Subsequent wrestling endeavours saw Calaway got signed to World Championship Wrestling (WCW) where he had a stint.

While at the promotion he briefly wrestled for New Japan Pro Wrestling (NJPW) before he signed for World Wrestling Federation (now WWE) in 1990.

The Undertaker Biography Facts – The Road To Fame Story:

It was at WWE that Calaway adopted the Stagename “Kane The Undertaker” with a matching deadman character that portrayed him as a western mortician.

He made his television debut on the 22nd of November 1990 during a tag team match that ended with victory for his team.

During the match, Calaway was referred to as “The Undertaker” with the omission of “Kane”. The omitted name was adopted years later by another wrestler who became The Undertaker’s fictional brother.

Other changes saw The Undertaker switch manager from Brother Love (a televangelist) to Paul Bearer who worked as a mortician in real life.

Paul was indeed a funeral director and embalmer before he took up the job of managing “The Undertaker”.

1991 was the year in which The Undertaker made his WrestleMania debut by defeating “Superfly” Jimmy Snuka.

He thereafter began his first major feud with The Ultimate Warrior, a faceoff that sparked the first-ever use of casket and body bags challenge in WWE history.

Months later, he participated in King of the Ring contest which he lost out at the semi-finals.

However, he was emboldened by his near-victory at the contest and went on to defeat Hulk Hogan at Survivor Series to win his first WWF (now WWE) title. The rest, as they say, is history.

Although The Undertaker has recorded enormous success in his decades’ long career, the same cannot be said of his relationships. He has been married thrice, with his latest marriage being less than a decade.

First was his marriage with his first wife, Jodi Lynn, in 1989. The marriage lasted a decade before the estranged couples got divorced in 1999, six years after the union gave rise to Calaway’s first child Gunner (born 1993).

Moving on, Calaway got married to his second wife Sara in 1999, months after he separated from his first wife.

The Undertaker is currently involved in a marital relationship with former WWE female wrestler Michelle McCool.

Prior to their marriage in 2010, Michelle was once married to a certain Jeremy Alexander whom she bore a child for. Her union with Calaway is blessed with a daughter Kaia Faith (born 2010).

The Undertaker was born into a family of 7 we bring you factual details about members of his family.

About The Undertaker’s Real Father:

Frank Calaway is The Undertaker’s dad. He was a native of North America and one of Calaway’s biggest supporters until his death on the 22nd of July 2003.

About The Undertaker’s Real Mother:

Calaway’s mom is Betty Catherine Truby. the mother of five shares a close bond with her sons including Calaway who stands at a towering height when compared to her.

About The Undertaker’s Siblings:

Calaway has 4 older brothers with whom he spent his entire childhood growing up with. They include David, Michael, Paul, and Timothy.

It is worthwhile to note that a wrestling legend called Kane is not a brother to “The Undertaker”. he only played the role of Calaway’s fictional brother.

The duo were collectively known as “The Brothers of Destruction” in WWE’s storylines.

Personal Life away from Wrestling

Oftentimes, there are big differences between the personalities of wrestlers in and outside the ring. Calaway is not an exception.

Standing at 6 ft 10 inches, the Undertaker has a cordial real-life personality and is very polite to fans who approach him for autographs.

Similarly, he wears casual clothes and would not be caught lurking in graves as his gimmicks portray.

However, he guards his privacy and seldom does interviews. His hobbies include riding vintage motorbikes and listening to rock music.

With an estimated net worth of $17 million, Undertaker lives a private life at his residence in Austin, Texas with his wife Michelle McCool.

Unlike most wrestlers, he has no high taste for luxury. This is evident in his vintage bikes and possession of few cars produced by brands like Mercedes and Ford.

Shortly after their divorce undertaker removed the tattoo and replaced it with A big black block of ink. Fast forward to date there is no sign of a tattoo on his neck.

FACT CHECK: Thanks for reading our The Undertaker Childhood Story plus untold biography facts.

At ChildhoodBiography, we strive for accuracy and fairness in our quest to deliver you WWE Superstar’s Biographies.

Kindly stay tuned for more related stories from our WWE category. You may find some interest in the childhood story of Kofi Kingston, Charlotte Flair, Braun Strowman and Seth Rollins.