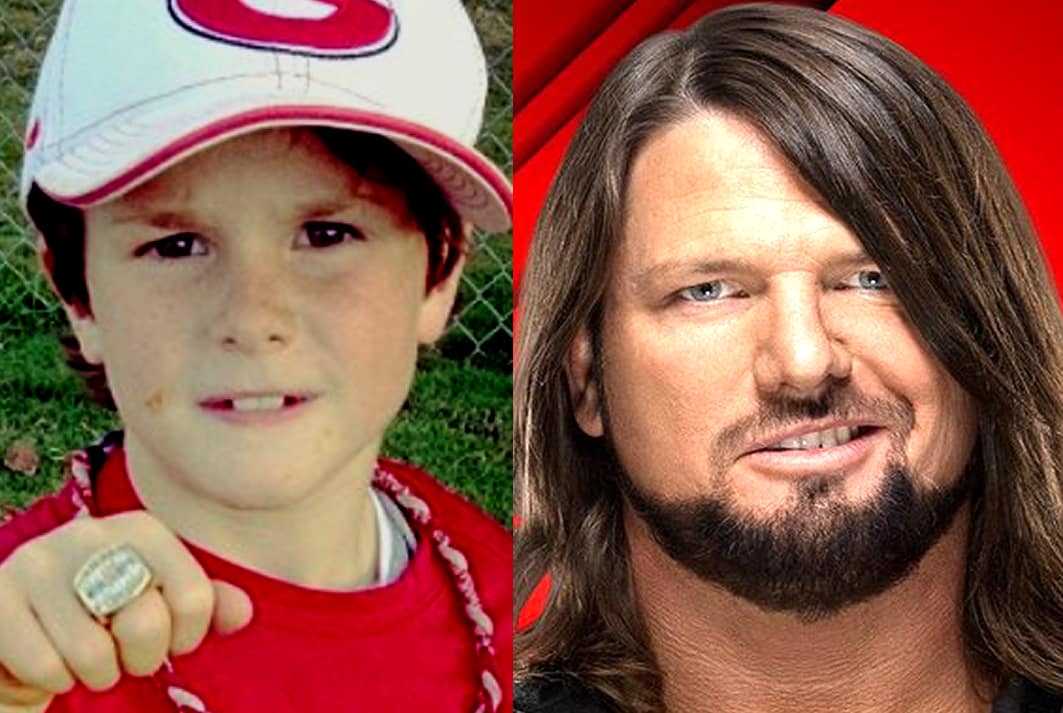 Childhood Biography presents the Full Story of a WWE Superstar best known by the nickname “The Phenomenal” and real name “Allen Neal Jones”.

Our AJ Styles Childhood Story plus Untold Biography Facts brings you a full account of notable events from his childhood time to date.

The analysis of the North Carolina-born professional wrestler involves his early life, life story before fame, family background and personal life. More so, other OFF and ON-Screen little-known facts about him.

Yes, everyone knows he is one of the world’s best professional wrestlers. However, only a few consider AJ Styles’ Biography, which is quite interesting. Now, without further ado, let’s begin.

He was born to a mother whom little is known about and to a father who served in the marines.

Young Styles’ family moved to Gainesville in Carolina when he was only one year old. It was at Gainesville that Styles grew up in poverty with his three brothers.

His family made their home in a trailer park and had no TV or any medium for entertainment.

To cap it all, Styles’ father was an alcoholic whose drinking problem found expression in abusing the wrestling prodigy.

“When he was drinking, he was a terrible father. Took it too far a little bit sometimes, coming home looking for a fight, and took it out on his kids and sometimes his wife.

There were some difficult times. Even though bad stuff like that happened, I still knew that my dad loved me.” Revealed Styles on Stone Cold WWE’s Network Podcast.

Notwithstanding, Styles’ father scored a few points in parenting by enrolling his son in school and ensuring that he participated in sports.

While at the school, Styles played basketball and baseball and started playing football in the 8th grade.

He was influenced by his friends to dabble in wrestling, a sport he slowly developed an interest in and became extremely good at.

As a result, he was offered a partial wrestling scholarship to study Physical Education at Anderson University in South Carolina.

However, Styles did not complete his studies at the college as he dropped out to get enrolled at a professional wrestling school.

While he was at it, Styles made ends meet by taking up odd jobs like driving, mowing lawns and supplying water.

The first stop on Styles’s early career cruise was at the National Championship Wrestling NCW promotion, where he made his debut in 1998 after being trained by the legendary Rick Michaels.

Although Styles lost his debut match to Michael Brooks, he developed an impressive form that saw him win the promotion’s Television Championship.

He thereafter wrestled at lesser-known independent promotions before moving to NWA Wildside, where he adopted the stage name “AJ Styles”.

2016 was the year Styles joined WWE and made his re-debut in January of that year. By re-debut, we mean Styles was no stranger to WWE.

In fact, he had made three appearances for WWE between 2001-2002 and was offered a development contract which he turned down.

Styles rejected the contract because it meant relocating to Cincinnati, Ohio, a move that would disrupt his wife’s plans for college.

Between January to August 2016, Styles had a failed shot at the Royal Rumble title, developed a feud with Chris Jericho and was drafted to the SmackDown brand, where he defeated Ambrose to become WWE World Champion and a fan favourite.

He defended his title several times and went on to clinch the United States Championship by defeating Owens in May 2017. The rest, as they say, is history.

AJ Styles is a married man. We bring you factual information about his past relationships, including how he met and married his wife, Wendy Jones.

To begin with, there are no records of Styles’ past relationships, as he had only been with his girlfriend-turned-wife, Wendy.

The duo first met during their studies at Johnson High School in Gainesville, Georgia and started dating on Valentine’s day during their senior year at the High school in 1996.

They remained an inseparable pair and got married four years later, on the 5th of August 2000.

Styles extremely loves his wife, who works as a school teacher. In the same light, he has a close bond with his children, whose dates of birth are tattooed on the right side of his body below the initials A.J. 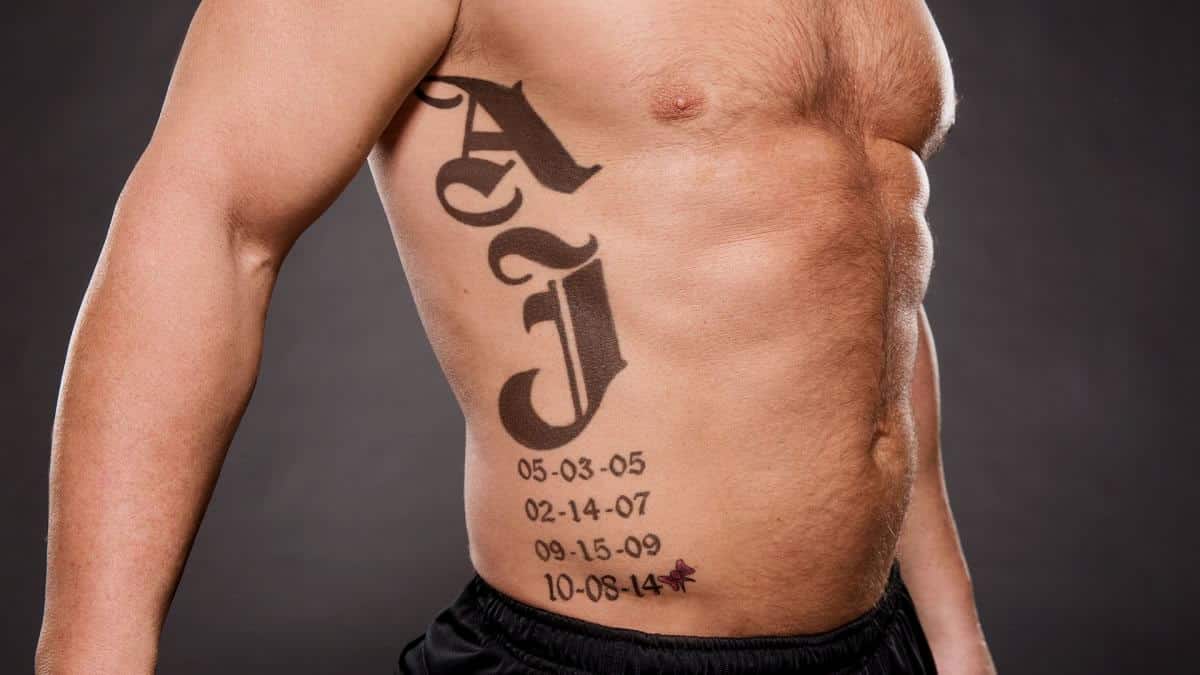 The WWE star was born into a lower-class family of 6 we bring you factual information about members of his family.

At the time of AJ Styles birth, his father was a mariner who lived with Styles’ mother and siblings at a military base in Camp Lejeune, North Carolina.

However, they relocated from the base to Gainesville, Georgia, when Styles was just one year old.

As a result, Styles does not remember anything about base life but once remarked that “once a marine, always a marine”.

It was after their relocation from the base that Styles’s father became an abusive alcoholic “who could tear someone up anytime he comes home drunk”.

Styles has a mother who stuck with the family through thick and thin, including sleeping with Style’s alcoholic father on a fold-out couch in the living room.

She made the decision in order to ensure that Styles and his three brothers could sleep inside the better room of the trailer park they lived in.

Styles has three brothers who are widely unknown, and no sisters. As a result, his position in the family cannot be determined.

Nonetheless, it is believed that their company helped shape his childhood and gave him the much-needed drive to achieve success.

What do you know of Styles beyond his in-ring endeavours? Sit back as we bring you the makings of his personality to help you get a complete picture of him.

To begin with, Styles is an adaptable and outgoing man who easily blends with fans and friends. On the flip side, he could be indecisive and sometimes impulsive.

Away from his proclivities, Styles is a self-proclaimed ‘Video Games enthusiast.’ His favourites include NCAA 13 Football, Street Fighters and Super Mario Bros. He also has interests in motorcycles, football and basketball.

With an estimated net worth of $6 million, Styles lives a modest life with his wife and children at their home in Gainesville, Georgia. He is not given to fancy showoffs like his counterparts in MMA and boxing.

However, the wrestler’s roadworthy cars and bikes take turns in helping him hit the road for his wrestling endeavours.

In 2011, Styles appeared in Sarah Darling’s music video “Something to Do with Your Hands”.

With the feat, Styles became the first wrestler to win the WWE World Championship Title outside North America. He also held the title for 371 days which is the longest in the history of SmackDown.

Styles has wrestled for international promotions, including New Japan Pro-Wrestling, where he became a two-time IWGP Heavyweight Champion.

During his numerous fights at TNA, Styles was perceived to be homophobic for making many comments that were considered offensive to the Gay community.

In 2009, he appeared as a wrestling coach on MTV teens’ self-improvement reality television series, “Made”  (season 10, episode 20).

Thanks for reading our AJ Styles Childhood Story, plus untold biography facts.

At ChildhoodBiography, we strive for accuracy and fairness in our routine quest of delivering you WWE Superstars Biographies.

Kindly stay tuned for more related stories from our WWE category. You may find some interest in the childhood story of Kofi Kingston, Asuka, Braun Strowman and Ronda Rousey.