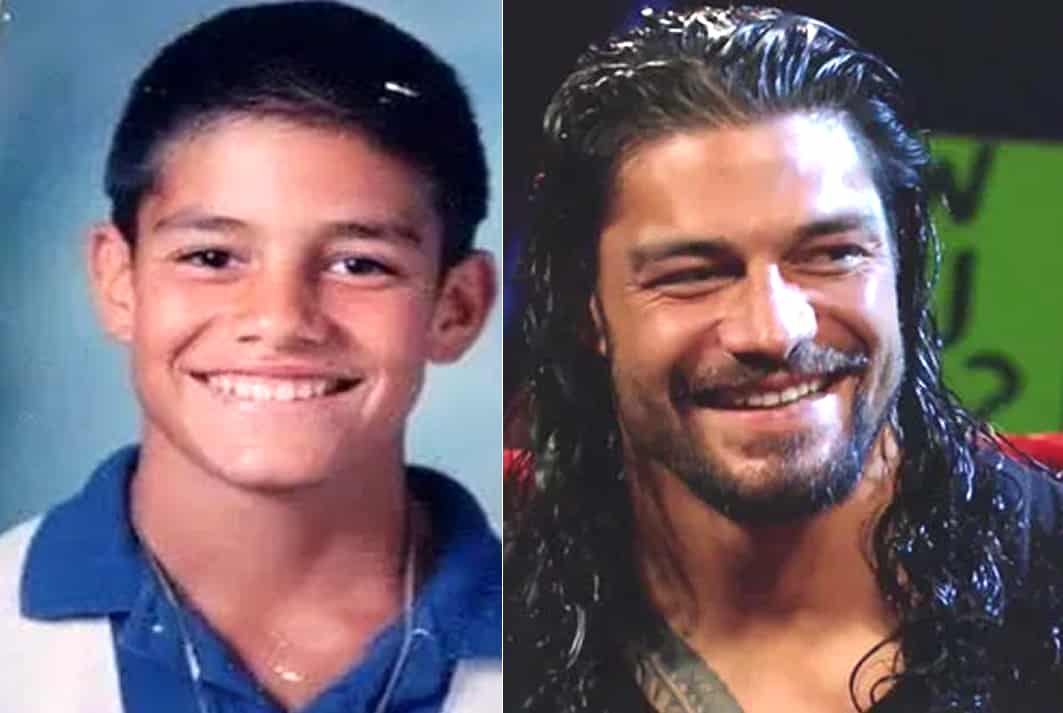 Childhood Biography presents the Full Story of a WWE Superstar. He is best known by the nickname “The Big Dog”.

Our Roman Reigns Childhood Story plus Untold Biography Facts brings you a lot. We’ll deliver to you a full account of notable events from his childhood time to date.

The analysis involves his life story before fame, family life/background, etc. Roman’s relationship life, and many OFF and ON-Screen (little-known) facts about him.

Yes, everyone knows about his successes at WWE. However, only a few consider Roman Reigns’ Bio, which is quite interesting. Now, without further ado, let’s begin.

For starters of his Biography, his full names are Leati Joseph Anoaʻi. Popularly known as Roman Reigns, the WWE star was born on the 25th of May 1985 at Pensacola in Florida, United States.

Roman Reigns was born to his mother, Patricia Anoaʻi, and his father, Sika Anoaʻi, (a retired professional wrestler).

Roman grew up in Florida’s city of Pensacola (pictured below). This part of the world is home to a family of wrestlers. Whose home surround the beautiful beaches. However, he was surprisingly not interested in wrestling during his formative years. 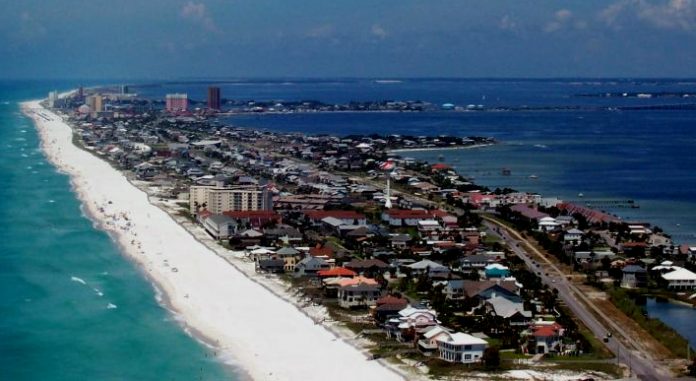 His childhood interests were centred on activities that include American football, Baseball, and Ice Hockey which were dominant sports in his hometown.

Reigns participated actively in the aforementioned sports without restraint from his family as he ascended up the academic ladder.

After graduating from high school, Reigns proceeded to Georgia Institute of Technology, where he majored in Management.

During his senior year at the institute, Reigns played the defensive line for the Georgia Tech Yellow Jackets where he was the team captain and was named first-team all-ACC in 2006. 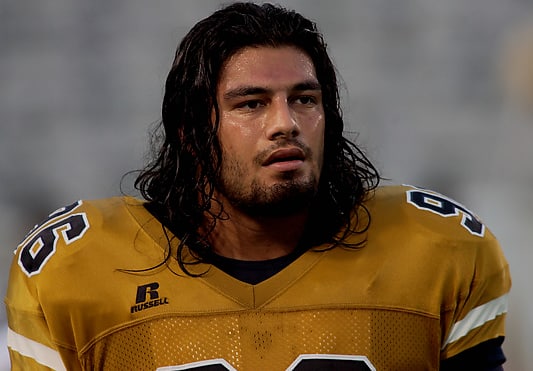 It wasn’t long before Reigns, just like his cousin ‘The Rock,’ quit football (after graduation) with a view to building a career in Wrestling, a sport in which the “Anoaʻi’s family” is a name to conjure with. 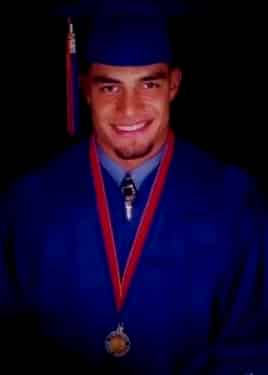 The switch of interests was, without doubt, a progressive move made by Reigns, who, before one of the fights he had in his hometown, recalled the pivotal career decision he made in the following manner;

“Growing up in Pensacola, like pretty much anywhere in the South, is a strong football town but wrestling was always an option.

Fortunately for me, I was able to play a little ball and get a scholarship. It all worked out for me”.

It is a known fact that most WWE stars go through smaller organizations and independent training to sharpen their skills before they ever get a big show in wrestling but that wasn’t the case for Roman Reigns who signed a developmental contract with World Wrestling Entertainment, WWE shortly after quitting football.

WWE then transferred Reigns to their developmental territory Florida Championship Wrestling (FCW) where he made his first appearance as “Roman Leakee” on the 9th of September 2010. 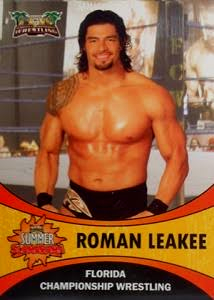 Subsequently, he teamed up with two other wrestlers to form a formidable tag team known as “The Shield” in 2012.

The Shield, which comprised Reigns, Dean Ambrose, and Seth Rollins, recorded a number of Tag Wins before they parted ways and regrouped after three and a half year, in 2017. 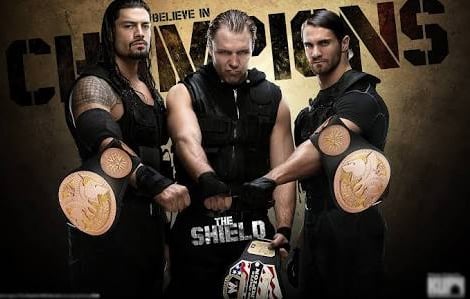 Roman Reigns is one among few wrestlers that have no records of past failed relationships, a fact which underscores the fact that he lives every sense of his nickname “The Thoroughbred”.

Reigns is currently having a good relationship with his longtime girlfriend or Wag turned wife, Galina Joelle Becker.

The Duo started out as college sweethearts during their years of study at the Georgia Institute Of Technology.

They took their relationship a step further by getting engaged on the 26th of February 2012. Two years later, they boarded the ship of ‘a happy thereafter’ by getting married in December 2014.

Their marriage is blessed with a daughter, Joelle, who was born in 2008. Behold, Roman Reigns Child. 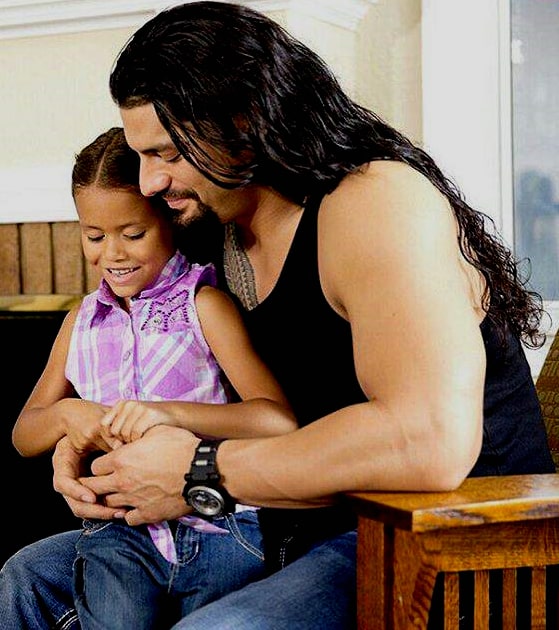 The family is also blessed with twin boys whose birth were kept private until June 2016. Little is still known about the twins at the time of writing this bio.

Although Roman Reign is known to be disciplined, he was once charged with violating WWE Wellness Policy in 2016, a development that led WWE to suspend him for 30 days.

It is worthwhile to note that the WWE wellness policy is a section of Pro-wrestlers contract that stipulates the carrying out of random drug tests on Wrestlers with a view to guarding against the use of recreational and performance-enhancing drugs.

Reigns was not one to feign nonchalance over the development as he handled the situation in a mature and professional manner by tendering an apology via a tweet for his misdemeanour.

‘I apologize to my family, friends and fans for my mistake in violating WWE’s wellness Policy, No excuses. I own it.’ 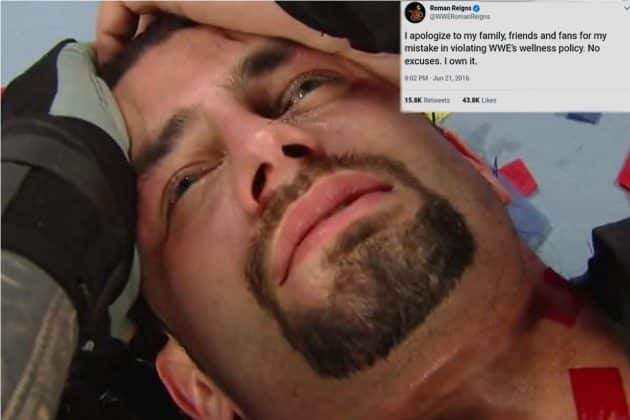 While Reigns is not known to be involved in any other major activity aside Wrestling, he has once mulled the idea of starring for Hollywood, a thought he laid bare to Chuck Carroll on ‘Turnbuckle Weekly,’ by noting that;

‘If that opportunity comes up…I’m willing to try anything and gain a little experience in anything.’ 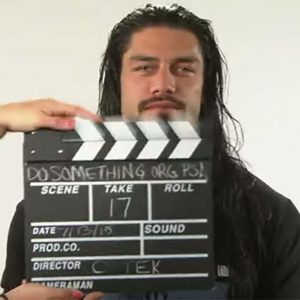 Reigns was once arrested at his hometown in June 2010 by local authorities who charged him for an array of offenses including affray, disorderly conduct, intoxication, riot, and unlawful assembly.

However, news of his arrest did not go rampant until 2013, when a picture of his mugshot was published by Mugshots.com.

The development did not affect his working relationship with WWE which many believed was not aware of the arrest in 2010. 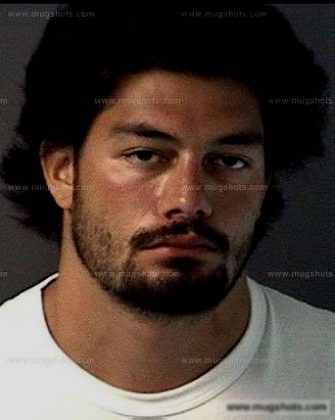 Reigns is one who exhibits tough demeanour in the wrestling ring but lives a disciplined life off-ring. Similarly, he goes lengths to put his Catholic faith into practice by making the sign of the cross anytime he enters the ring. 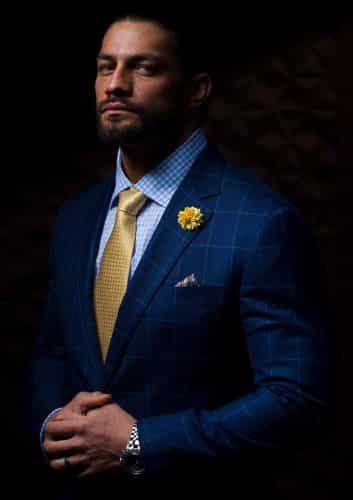 As regards his strengths Reigns is an adaptable quick learner as evidenced in how he fared well playing Baseball, American Football and Wrestling. Moreso, he is affectionate and finds time to accord priority to other concerns outside wrestling.

Roman Reign has his roots in one of the largest pro wrestling families in history, the Anoa’i Family. We will bring you details about members of his family.

Roman Reigns father, Leati Sika Anoa’i Amituana’i was a professional wrestler whose career spanned between the year 1973 to 1988 when he got retired. 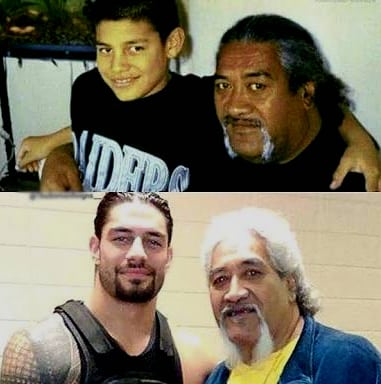 Little is known about Roman Reigns mother Patricia A. Anoa’i. She was married to Reigns’ father for years before they got separated over family issues. 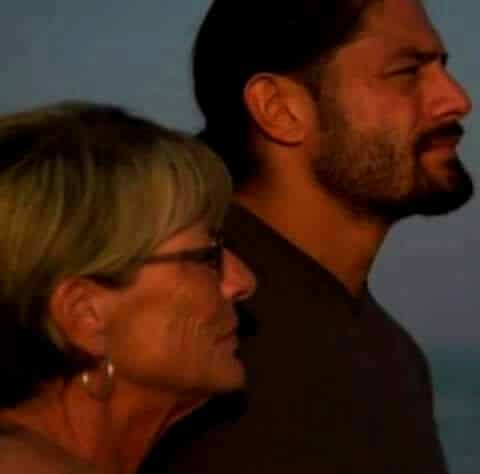 Matthew Tapunu’u Anoaʻi also known as Rosey, is the brother of Roman Reigns. He was an American Professional Wrestler who signed for WWE in 2002 and had a successful career that lasted till 2006. That year, he was released from his WWE contract. 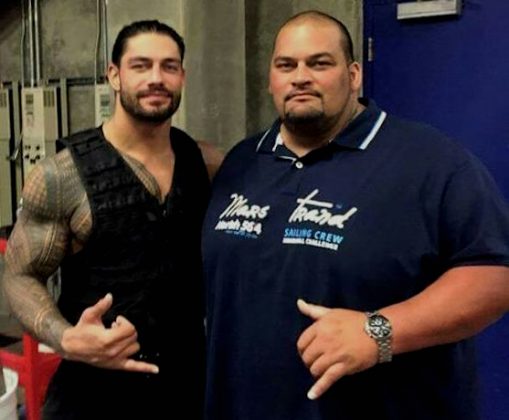 He died on April 17, 2017, in Pensacola, Florida, due to congestive heart failure. Commenting on the death of his brother, which was a shock to the family, Reigns noted that:

“Right now, it’s one of those situations where it’s a lot of mixed feelings.

When you live in a big family, it’s always great to be able to come together, but to have to come together to send off a brother — and not only was he my brother, but in our family, even when you’re cousins, we’re all so close that we feel like brothers”

He also revealed the relationship that he had with his brother:

“He was my number one fan. Again, He never missed a match, he never missed anything I did in the ring, he always had great advice for me and always reached out to talk”.

As a member of the Anoaʻi family, Reigns is a cousin to former professional wrestlers, Yokozuna, Rikishi, Umaga, The Tonga Kid as well as The Rock.

However, The Rock and Roman Reigns are distant cousins because their grandfathers – Peter Maivia and Amituana Anoa’i, were blood brothers.

WWE star, Reigns, has an array of nicknames which he acquired over time. While most of the nicknames describe his wrestling prowess others depict fans’ perception of him.

The nicknames include, Roman Leakee, The Juggernaut, The Powerhouse, First Class, The Enforcer/Muscle of the shield, Joe, The Guy, The Thoroughbred and The Big Dog.

Although The “Big Dog” has had every one of his fights televised. Since his WWE debut in September 2009, he did well to pull off those daring appearances without giving an inkling of his secret battle with Leukaemia.

Reigns was first diagnosed of the terminal disease when he was 22 years of age in 2007. This is a period that coincided with the time he gave up on football.

Fortunately, the ambitious lad who had his life ahead of him was able to put the disease into remission. 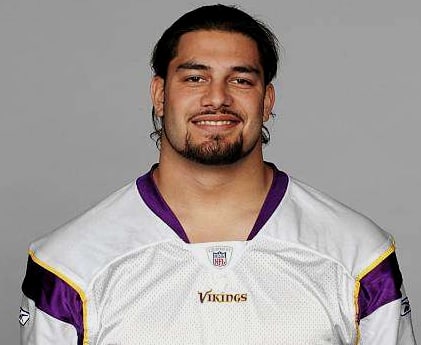 Fast forward to 2018 (11 years later) the dad-of-three, discovered the disease has returned, and with the discovery came shocking revelations to fans who never believed that the tough one had secret battles.

In the same light, Reigns told the stunned crowd at a Monday Night Raw that he would be taking some time away from the ring and would relinquish the Universal Championship.

.@WWERomanReigns has to relinquish the Universal Championship due to a battle with leukemia. #Raw pic.twitter.com/EhomllNwjK 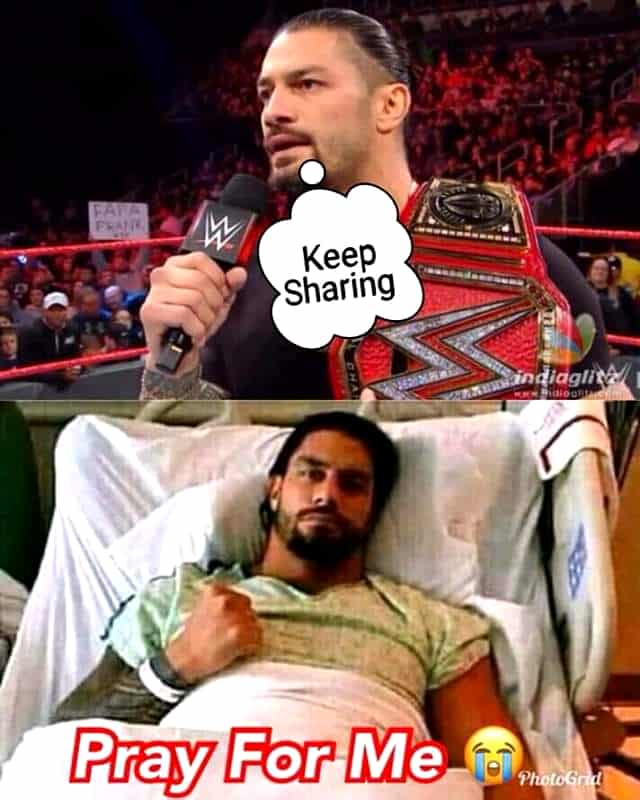 Indeed the hearts and prayers of many are with Reigns. As they hope that the Grand Slam champion would be back. Especially once he’s done whipping leukaemia’s ass. 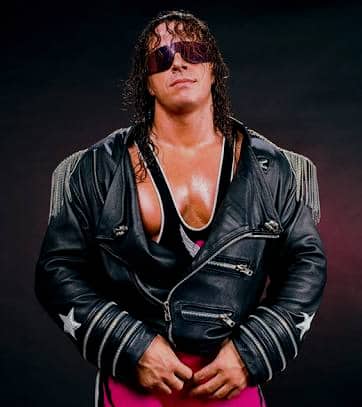 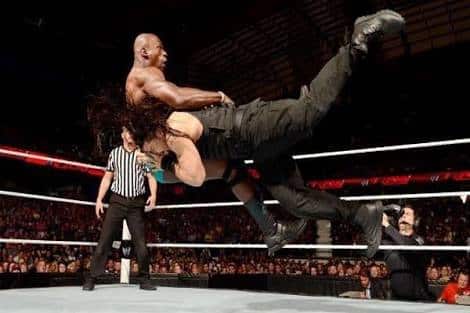 FACT CHECK: Thanks for reading our ROMAN REIGNS Childhood Story plus untold biography facts. At ChildhoodBiography, we strive for accuracy and fairness. If you see something that doesn’t look right in this article, please place your comment or contact us!