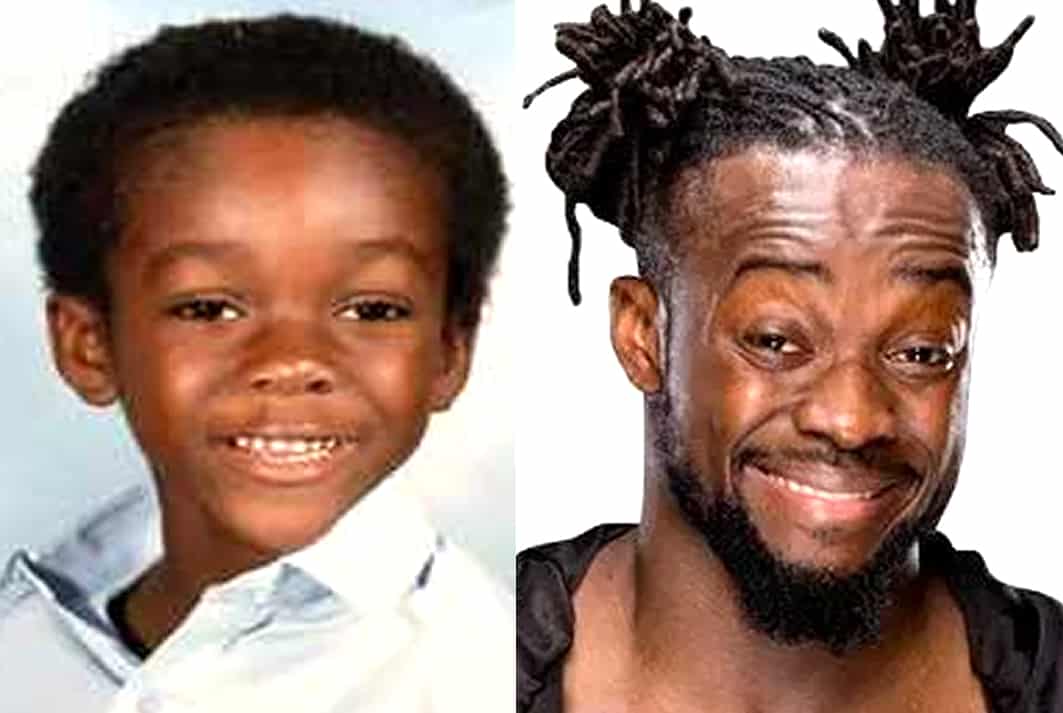 Childhood Biography presents the Full Story of an American-Ghanaian wrestler with the nickname “The Dreadlocked Dynamo”.

Our Kofi Kingston Childhood Story plus Untold Biography Facts brings you a full account of notable events from his childhood time to date.

The analysis of the WWE Star of Ghanian origin involves his early life, life story before fame, family background, and personal life.

More so, other OFF and ON-Screen little-known facts about him.

Yes, everyone knows he is one of the high-flyers in World Wrestling Entertainment. However, only a few consider Kofi Kingston’s biography, which is quite interesting. Now, without further ado, let’s begin.

For Biography starters, Kofi Sarkodie-Mensah was born on the 14th day of August 1981 at Kumasi in Ashanti, Ghana. He was the eldest of three children born to his mother, Elizabeth and to his father Kwasi Sarkodie-Mensah.

Young Kingston was only three years old when his family relocated from his birthplace to the US in 1982.

The family made their new home at Winchester in Massachusetts where Kingston was raised alongside his brother, Kwame and late sister Nana.

Growing in Massachusetts, the American and Ghanian national of black ethnicity with Ghanian roots was an avid fan of wrestling who often woke up every Saturday morning to religiously watch “Superstar Saturday”.

His childhood was also characterized by physical activities like playing in the woods with his peers, hopping fences, and riding bikes.

While at the school Kingston blended academics with playing baseball and being actively involved in gymnastics.

At the same time, he sustained his passion for wrestling even after progressing to Boston College where he earned a degree in communication.

Upon graduation from college, Kingston briefly worked a corporate job which he soon ditched to get trained at a wrestling school in late 2005.

“My first day at work I sat in my cubicle and looked at the empty walls and it was very depressing … however, the very first day I walked into the wrestling school, I knew I was in the right place”. He recalls.

Kingston made his official wrestling debut on the 24th of February 2006 during a match against Tony Omega at Chaotic Wrestling (CW).

Months later, he entered a competition for PWF Mayhem Heavyweight Championship by wrestling Evan Siks on the 4th of June.

Kingston took a major step closer to fame by signing a development contract with WWE in September 2006. He was immediately transferred to WWE’s development territory, Deep South Wrestling (DSW).

While at the territory, Kingston adopted the stage name “Kofi Nahaje Kingston” and made appearances for both DSW and its Kentucky-based sister promotion, Ohio Valley Wrestling (OVW).

Not long after, he was transferred to Florida Championship Wrestling (FCW) where he worked for the most part of late 2007 under a shortened ring name – “Kofi Kingston”.

Kingston remained relatively unknown until he was involved in a 24-man battle royal during the WrestleMania XXIV pre-show in 2008. He was however eliminated from the contest whose prize was the ECW Championship Title.

Nonetheless, Kingston extremely fared well in singles of the ECW by pulling off streaks that lasted for months.

Not long after, Kingston was drafted to Raw brand where he defeated Chris Jericho to win his first Intercontinental Championship Title.

Kofi Kingston is a married man. We bring you details about his marital life including how he met and married his wife Kori Campfield.

To begin with, the duo were longtime lovers who met and began dating prior to Kingston’s rise to fame. Unlike Kingston, Kori was born in Ithaca in New York, USA.

They took their relationship to the next level by getting married in 2010.

Their wedding was a private ceremony which was only attended by a few important persons in the couples life. Kofi and Kori’s union is in the meantime blessed with two sons.

The first was born sometime in 2013 while their second son, Orion Kingsley Sarkodie-Mensah was born in April 2016.

Kingston was born into an intellectual family of 5. we bring you factual information about members of his family.

Kwasi Sarkodie-Mensah is Kingston’s dad, the father of three is an academic who works at Boston College in the US.

Kwasi and his intellectual friends were initially disappointed by Kingston’s decision to become a wrestler.

In fact, one of Kwasi’s friends who worked in Ghanaian academia, Raymond Osei-Boadu remarked that:

“Why would a person who is very capable of going to graduate school decide to jettison all that for concussion in the face? I cannot bring myself to understand.”

However, Kingston father is now happy with the turn-out of events knowing fully well that Kingston loves and makes progress with wrestling.

“I know it is a very anti-intellectual thing, but I think everybody should get up in the morning and be excited about what they do,” he says.

Dr Elizabeth is Kingston’s mother and a strict enforcer of the family’s values and protector of their heritage. It was Elizabeth who disclosed to the press that Kingston was a Ghanian born wrestler.

The disclosure brought an end to the wrestler’s portrayal of himself as a Jamaican during the early days of his career because he believed fans would be more likely to embrace a wrestler from the land of Bob Marley and reggae music.

Dr Elizabeth worked as the head of a Ghanaian-American organization in the US called the Ghanaian Association of Greater Boston.

She is also the Instructional Liaison Librarian at Merrimack College, North Andover, Massachusetts.

Elizabeth has a good relationship with Kingston and is happy that he established himself as one of the high-flyers in World Wrestling Entertainment.

Kingston has just two siblings. They include his brother Mr Kwame Sarkodie-Mensah who works as a composer and cyber-specialist. On the other hand, is his late sister Nana Akua.

Until her death in 2015 Nana was a graduate of the University of Massachusetts (UMASS), Boston Campus.

She was also set to begin an MBA program in Hospitality Management at the Johnson & Wales University in Providence, Rhode Island.

Personal Life away from Wrestling

What do you know about Kingston beyond his in-ring performances? sit back as we bring you makings of the wrestler personality in order to help you have a complete picture of him.

To begin with, Kofi has an easy-going and remarkably humble persona. The father of two used to have issues of low self-esteem including being mad at his parents for naming him Kofi instead of Joey.

However, he now cherishes himself for his uniqueness and advice others to stay true to themselves.

In the same light, Kingston’s possesses tattoos that have cultural significance and are deeply rooted in his West African heritage.

His hobbies include hitting the gyms and playing video games with his sons. Away from wrestling, Kingston has interests in baseball, football and basketball.

Similarly, he is a great supporter of the Boston Red Sox, New England Patriots and Boston Celtics.

He is also a four-time Intercontinental Champion, a three-time U.S. Champion, and a five-time Tag Team Champion in WWE. However, he is yet to earn a World Championship or Universal Championship.

With an estimated net worth of $3 million, Kingston lives a private life with his wife and children at their little known residence in Austin, Texas, United States.

The wrestler tries his possible best to keep anything, but his career is from the public thus little is known about the type of cars he uses to hit the road.

FACT CHECK: Thanks for reading our Kofi Kingston Childhood Story, plus untold biography facts. Stay tuned for more related stories on this page. That of AJ Styles, Natalya Neidhart, and Drew McIntyre would interest you.

At childhood biography, we strive for accuracy and fairness while delivering you the stories of WWE Superstars. If you see something that doesn’t look right in this article, please place your comment or contact us!