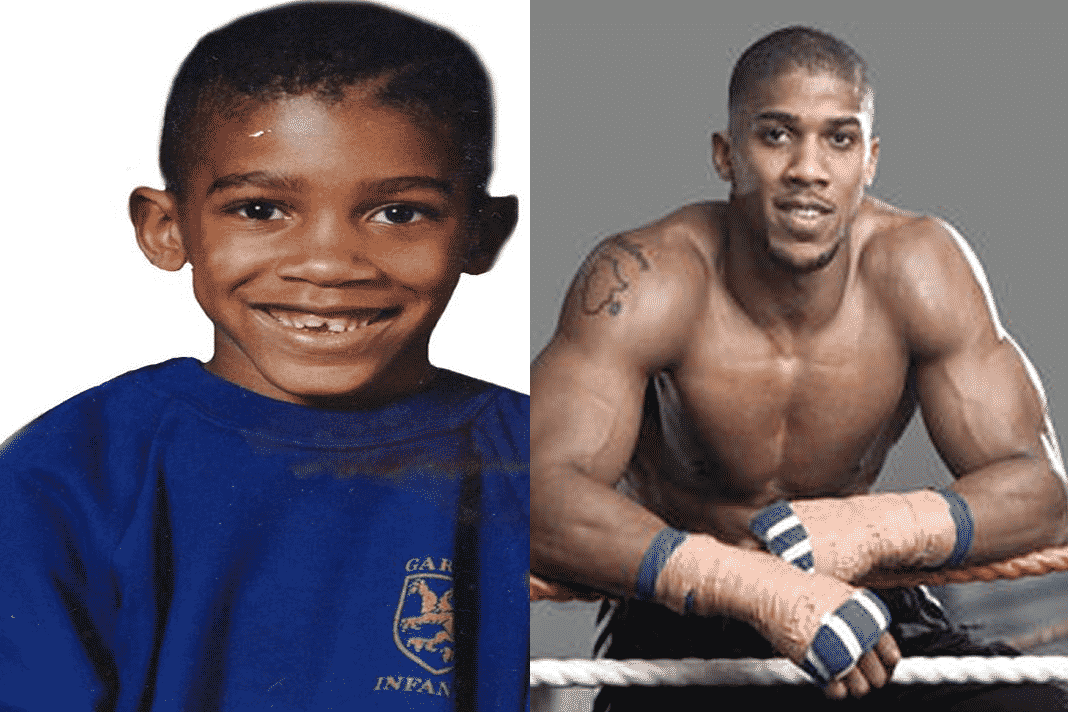 Our Anthony Joshua’s Biography tells you Facts about his Childhood story, Early Life, Parents, Family, Girlfriend/Wife to be, Lifestyle, Net worth and Personal life.

In the nutshell, this is a story of the Boxer’s life journey, from his boyhood days, to when he became famous.

To whet your autobiography appetite, here is his cradle to adult gallery — a perfect summary of Anthony Joshua’s Bio.

Yes, everyone knows he is one of the best boxers in the heavyweight division. However, only a few consider Anthony Joshua’s Biography, which is quite interesting. Now, without further ado, let’s begin.

For Biography starters, Anthony Oluwafemi Olaseni Joshua was born on the 15th day of October 1989 in the town of Watford in Hertfordshire, England.

He is one among 4 children born of the union between his father Robert Joshua and mother Yeta Odusanya.

The famed heavyweight boxer is a British national who possesses Nigerian family roots. Added to Joshua’s family origins are his Irish roots, which establish him as an individual of mixed ethnicity.

Do you know that Young Joshua was very young when his parents got divorced?

Notwithstanding, Joshua had a happy early life growing up at Meriden Estate in Watford where his mom – Yeta raised him alongside his brother Jacob as well as sisters; Loretta and Janet.

Thanks to Yeta’s superb motherly care, Joshua and his 3 siblings lacked nothing as they grew up in a middle-class family background setting which promoted fun-filled activities like singing, dancing and sports.

By the time Joshua was aged 11, he had already become a naughty kid. Thus, when Joshua’s family moved to Nigeria in the year 2000, his mother had good reasons to enrol him in a boarding academic institution called Mayflower School at Ikenne in Ogun State, Nigeria.

While at the school, Joshua was – like all other students – subjected to a demanding regimented lifestyle that saw him wake up at 5.30 am every morning to fetch water.

What more? he had no chance of escaping daily punishments and beatings which were randomly carried out by senior students of the educational institution.

Fortunately for Joshua, he only spent six months at the boarding school before leaving with his family to Watford.

Joshua continued with his education at Kings Langley Secondary School in Watford, where he was very much dedicated to athletics and broke the high school’s Year Nine 100m record by finishing in 11.6 seconds.

Away from school and sporting activities, Joshua made an early career out of bricklaying. While the then semi-lanky youngster was at it, he was involved in street fights, going out to nightclubs as well as drinking and smoking.

At the peak of his street fights, Joshua was banned from appearing in the Watford area for a year. He was also made to wear an electronic tag for monitoring purposes.

Rather than tread a different path, Joshua resolved to get bigger and stronger in order to command fear and respect whenever he returns to his old stomping ground.

He even bought a bench press and weights to achieve the purpose. Joshua’s newfound commitment to bodybuilding soon amused his cousin Ben Ileyemi who introduced him to boxing at Finchley Amateur Boxing Club in Barnet.

It wasn’t long before Joshua’s training at the Finchley Amateur Boxing Club made him realize he had a natural talent for boxing.

Thus began his foray in amateur boxing which he prospered in by winning titles and getting welcomed to Team GB squad.

However, Joshua was yet to learn his final lesson regarding good comportment until he was once stopped by police who found 8oz of cannabis in a sports bag inside his Mercedes car.

Although Joshua was charged with a career-threatening possession-with-intent-to-supply, he luckily survived and got a minor punishment of 12 months’ community order as well as 100 hours of unpaid work.

Emerging from the depths of corrections, Joshua made the decision to put things right, an aim he achieved within two years by becoming an Olympic boxing champion and travelling around the world to discuss his future with the biggest names in the boxing business.

Joshua eventually turned pro in 2013 and went on to record a victorious debut against Italy’s Emanuele Leo on the 5th of October that year.

Fast forward to December 2019, Joshua is a former unified world heavyweight champion who has held the WBA (Super), IBF, WBO, and IBO titles between 2016 and 2019.

He is – at the time of writing this biography – set to have a rematch with Andy Ruiz Jr who did not only hand him his first professional defeat but also stripped him of his 4 titles in June 2019.

Despite reclaiming and re-losing the belt to Oleksandr Usyk, he still won fans’ hearts. Just like Amir Khan, Anthony is one of Britain’s favourite Boxers. The rest, as we say of the British Boxer’s Biography, is now history.

Moving on to Anthony Joshua’s love life it is believed that the quality time he invested in dominating the heavyweight scene has prevented him from having a robust dating history.

In fact, the boxer with numerous rumoured relationships is known to have had something serious with one girlfriend from who he has long separated from.

The lady who made it to Joshua’s confirmed dating list is no other person but Nicole Osborne. She triples as Joshua’s childhood friend and high school sweetheart.

It was therefore not surprising that the duo had a son together named Joseph Bayley Temiloluwa Prince Joshua (born April 2016).

Speaking of Nicole’s whereabouts after the split, the former gym teacher and pole dancer reportedly lives in a £500,000 house situated at Finchley in northwest London.

The house was paid for by Anthony Joshua, who still holds the mother of his son in high esteem.

It takes a family to build a man and Anthony Joshua has not been found lacking in that department.

We bring you facts about Joshua’s family members beginning with his parents as well as outline available records about his ancestry.

Robert Joshua is the boxer’s supportive dad. He is of Nigerian and Irish descent from Joshua’s paternal grandfather and grandmother respectively.

Although Robert separated from Joshua’s mom, he didn’t lose sight of his kids and has been a supporting pillar to Joshua.

Robert was even spotted standing beside Joshua when the boxer recorded his first professional defeat. He no doubts shares a good relationship with Joshua and works for the boxer’s best interest.

Yeta Odusanya is Anthony Joshua’s mom. She is of Nigerian descent and identifies with the Yoruba-speaking extraction of southwest Nigeria. It was Yeta who helped raised Joshua and his siblings following her split ex-husband Robert.

She is no doubts an excellent mom, ex-wife and playful companion to her children who love her in the same measure.

In fact, Joshua reportedly lives in the same house with Yeta, a development that speaks volumes of her accommodating nature.

Anthony Joshua has three siblings. They include his brother Jacob as well as sisters; Loretta and Janet. Little is known about the siblings save for Janet, who has an interest in hairstyling and owns a salon.

The siblings are all believed to have a close relationship with Joshua, who is much of a family guy and a celebrity huge brother.

Moving on to Anthony Joshua’s relatives or extended family life his paternal grandparents were Isaac Joshua and Moya V. Harper while his maternal grandfather and grandmother were James A.

Odusanya and Olufunmilayo Solanke respectively. One of Joshua’s cousins has been identified to be the professional boxer Ben Ileyemi while there are virtually non-existent records about his uncles, aunts, nieces and nephews.

Speaking of Anthony Joshua’s personality, he has an amazing persona. One that reflects the lively and resilient nature of individuals guided by Libra Zodiac Sign. in addition, He is intuitive, altruistic and exercises a significant degree of humility.

The boxer who moderately reveals information about his private and personal life. He has interests and hobbies that include bike riding, cycling, playing basketball, training at gyms keeping up with soccer games as well as spending quality time with family and friends.

Regarding how Anthony Joshua makes and spends his money, he has an estimated net worth of £35million at the time of writing this bio.

The bulk of Joshua’s wealth does not stem from a steady stream of wages and salaries. But from the huge monies he carts after winning bouts while others take the form of endorsement deals.

As a result, Joshua affords to live the luxurious lifestyle that everyone sees him live. This includes wearing expensive clothing, driving in a bespoke Range Rover, and spending quality time at expensive resorts.

However, the boxer doesn’t have his personal apartment at the time of writing but resides with his mom at an ex-council house.

To wrap up our Anthony Joshua childhood story and biography we present untold facts.

Joshua is a believer who has severally acknowledged the existence of God. He does not follow a specific religion but has an interest in all religions. As a result, Joshua has no problems praying anywhere including inside mosques.

The boxer who possesses a height of 6′ 6″ has no fewer than 3 prominent body arts. They include the inscription of the word “wisdom” on his right arm. Right below the tattoo is a map of Africa showing his Nigerian roots.

In addition, Joshua has the emblem of his Team GB. It is inked between his massive shoulder blades. He also has the tattoo of a lion and forest inked on his finger to cover up calluses that he picked up during his boxing career.