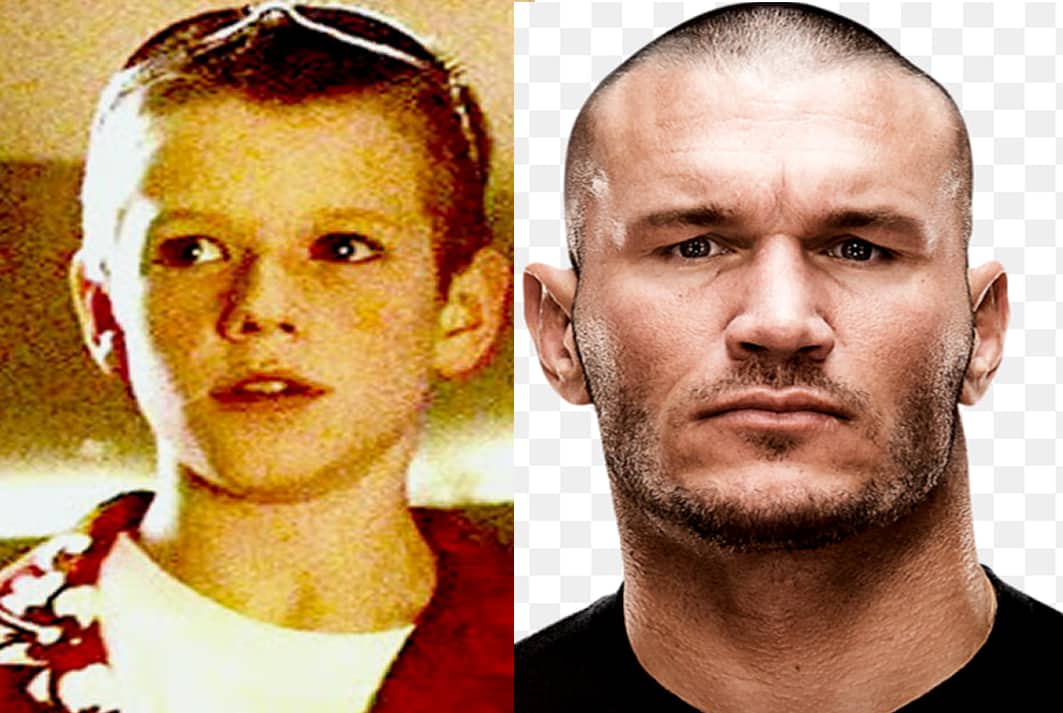 Childhood Biography presents the Full Story of a WWE Superstar and actor who is best known by the nickname “The Viper”.

Our Randy Orton Childhood Story plus Untold Biography Facts brings you a full account of notable events from his childhood time to date.

The analysis involves his life story before fame and his family background. More so, many OFF and ON-Screen little-known facts about him.

Yes, everyone knows of his several appearances in WWE. However, only a few consider Randy Orton’s Biography, which is quite interesting. Now, without further ado, let’s begin.

For Biography starters, Randal Keith Orton was born on the 1st day of April 1980 in Knoxville, Tennessee, United States. He was the first child born to his mother, Elaine Orton, and to his father, Bob Orton Jr (an ex-professional wrestler). 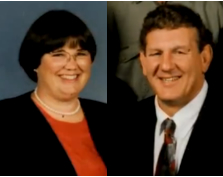 Although Orton was born in Knoxville, he grew up in St. Louis, Missouri with his younger brothers Nathan and Roderick, as well as his sister Becky.

Growing up in St. Louis, which is best known for its baseball sporting activity, beer as well as Gateway Arch, young Randy developed an interest in wrestling. 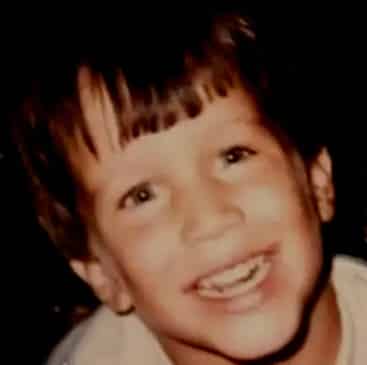 His interest in the sport was much considered to be a family heritage owing to the fact that his paternal grandfather Bob Orton Sr, father Bob Orton Jr and Uncle Barry Orton had competed in the professional wrestling business.

In addition, he was a fanboy of good old notable wrestlers, including Hulk Hogan. 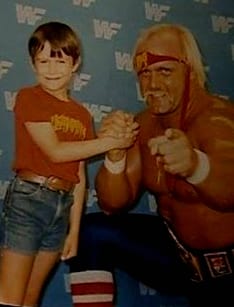 It was only natural for Orton to contemplate treading the paths of his father and grandfather, a development that didn’t go well with his parents.

On his part, Orton’s father stressed that becoming a wrestler would make him stay away from loved ones while his mother admonished him to choose a different career.

Orton was not one to let his parents’ fears dissuade him from chasing his childhood passion. His zeal to become a wrestler saw him attend Hazelwood Central School, which had wrestling as a part of its sporting activities.

In addition, the institution was renowned for having a functional wrestling team. 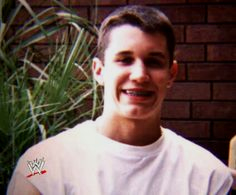 It was at the school that Randy developed his wrestling skills as an amateur wrestler.

Interestingly, he was not known to be a troublemaker despite having a strong physical build. He graduated from the school in 1998 and has long remained a respected alumnus of the academic community.

While Orton was at Hazelwood, he showed an interest in firearms and was much closer to a military recruiting officer at Hazelwood, who was a Marine.

The development informed his decision to join the United States Marine Corps (after graduating from high school) starting out at the boot camp in San Diego, CA. 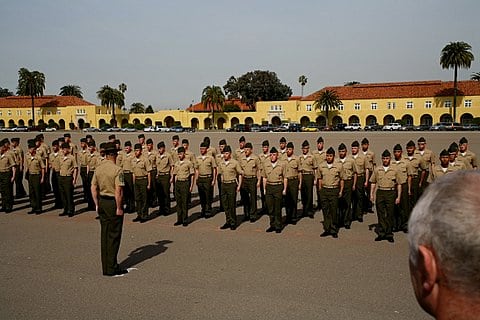 Subsequent military career build-up saw randy attend the school of infantry where he became a squad leader and guide. 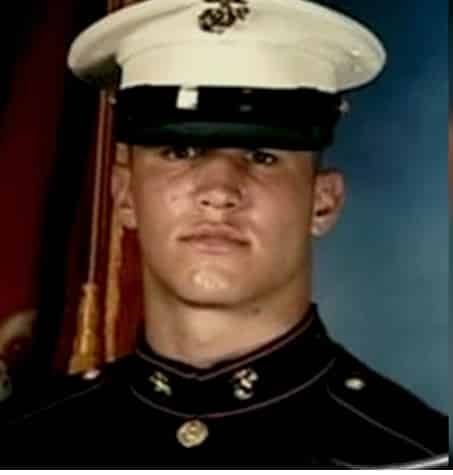 Orton was however, court-martialed for going Awol and disobeying an order from his commander.

A month after, he was discharged from his duties, having served 38 days in military prison. 18 years later, Orton would during a heated interview with Booker T, admit the reason why he never fared well in the corps;

I didn’t have the courage to die for my country.

Orton’s dishonourable discharge from the Marine Corps was taken in good fate by his parents who were left with no choice but to support his aspirations of becoming a wrestler.

To that end, Orton’s father secured him a developmental contract with WWE through the aid of his good old friends. Speaking about the contract years later, Orton recalls that:

My dad called a couple of his buddies — Tony Garea, Jack Lanza. They were agents at the time, road agents. They had a show in St. Louis in October of 1999. I came down, met Lanza, met Garea. And they hired me, right on the spot.

In addition, his father alongside the staffs of wrestling promotion trained Orton at the Mid Missouri Wrestling Association-Southern conference Illinois Conference Wrestling (MMWA-SICW) where he made his debut in 2000. 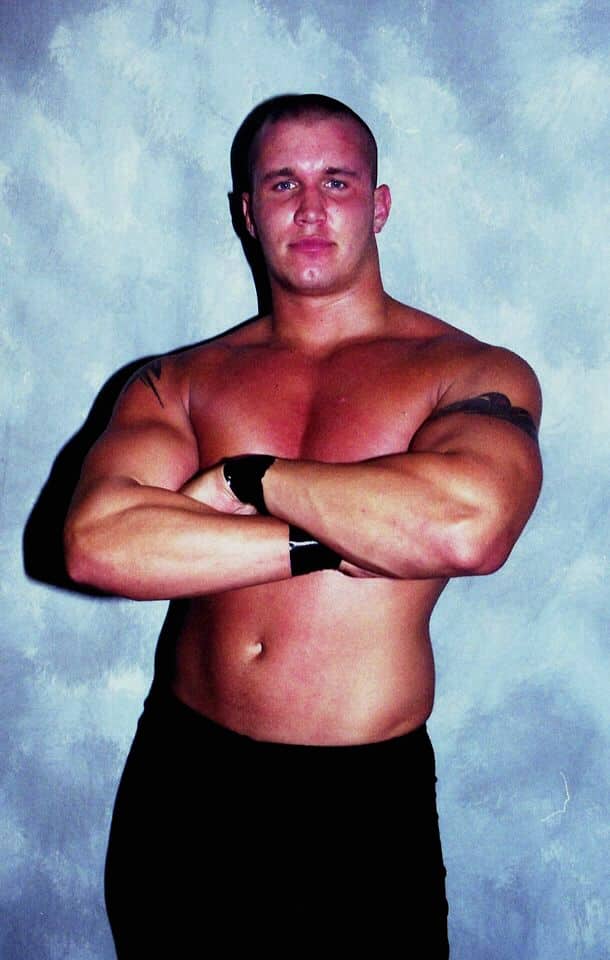 The series of training which Orton acquired at (MMWA-SICW) was put into good use when WWE (then known as world wrestling Federation WWF) transferred him to Ohio Valley Wrestling (OVW).

It was at OVW that Orton wrestled with the likes of John Cena (then known as the prototype) as well as formed a tag team with Bobby Eaton.

2002 was a significant year for Orton whose first televised match saw him defeat Hardcore Holly and became a fan favourite months later.

It wasn’t long before Orton proclaimed himself as “The Legend Killer”, invented his RKO move and in 2004 defeated Chris Benoit (during the SummerSlam of world heavyweight championship) to become the youngest world champion (aged 24) in WWE. The rest, as they say, is history. 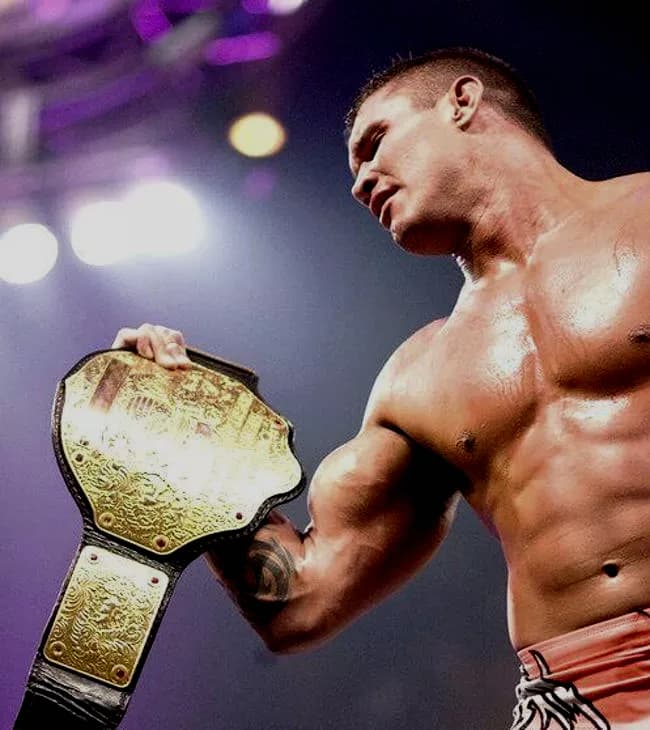 Randy Orton is one among American celebrities, including Kim Kardashian West and Mariah Carey who have been married more than once.

We bring you facts about his relationship life, beginning with how he met and married his first wife Samantha Speno.

Orton and Samantha first met at a bar in 2013 and had a series of relationships afterwards. They took their relationship to the next step by getting engaged in 2005 and tying the knot in 2007. 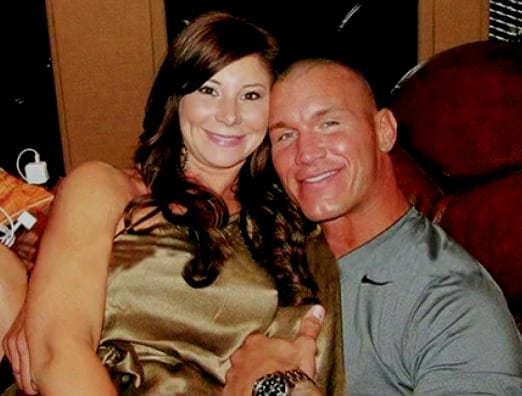 Their relationship was blessed with a daughter Alanna Marie Orton born in 2008. 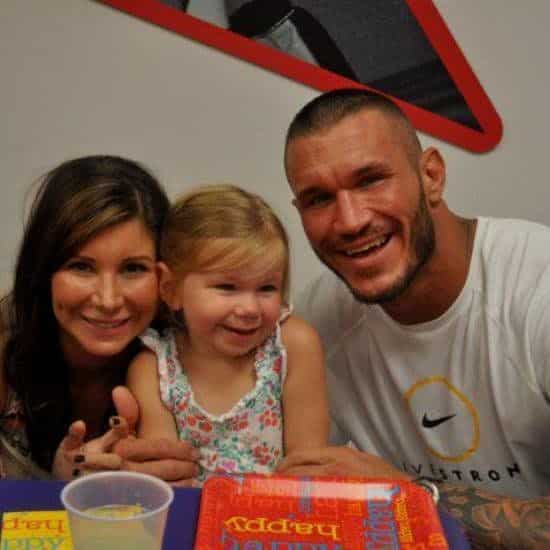 Following the birth of Alanna Marie, the couple lived in uncertain circumstances before announcing their amicable separation in 2012, followed by a divorce in 2013. The estranged couples still maintain a cordial relationship as Randy visits his daughter Alanna in Speno’s custody.

In addition, Orton pays $4500 monthly for child support as part of their divorce settlement. Moving on, Orton met his current wife Kim Marie Kessler at a WWE event in 2014.

Theirs was a head over heels type of love as Kim had always loved Orton as a fan while Orton was attracted to her at first sight. 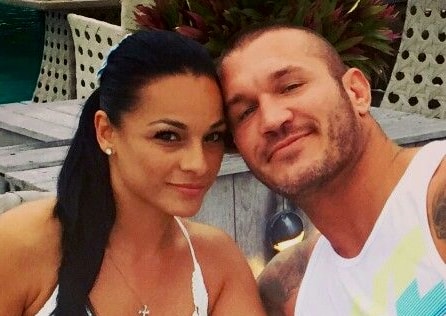 It wasn’t long before they got engaged and married in 2015. 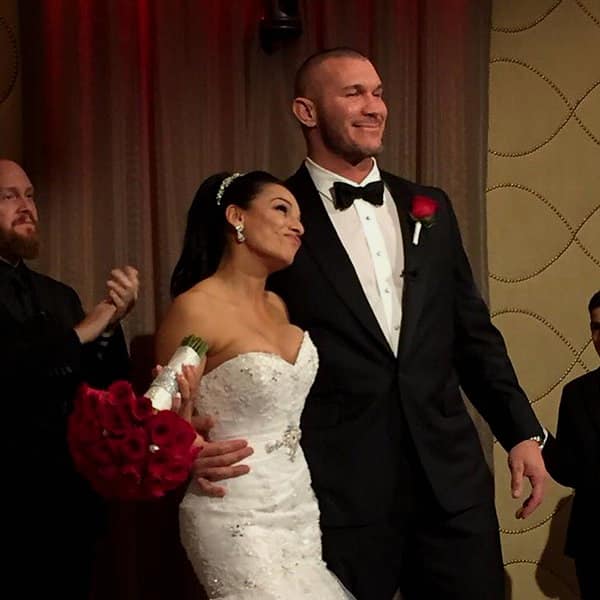 Their relationship is blessed with a daughter, Brooklyn Rose. Randy lives happily with his wife and daughter. In addition, he plays a fatherly role to three sons which Kim had from a previous marriage. 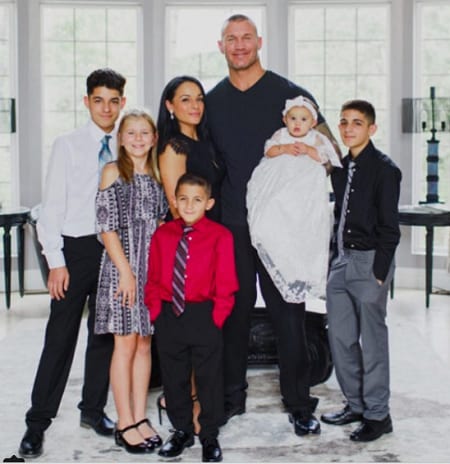 ‘The Viper’ grew up in a family of 6 we bring you details about his family.

Elaine Orton is the mother of the third generation WWE superstar. She is a registered nurse and also a mother to Orton’s siblings, Nathan and Becky. 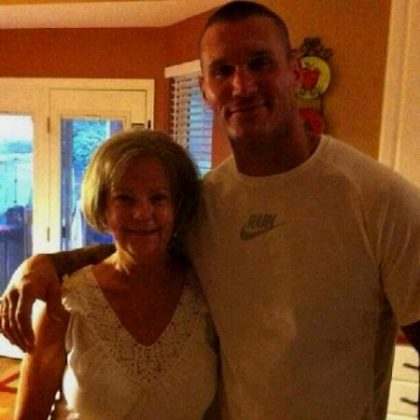 Elaine got married to Orton’s father Bob Orton Jr and the couple have reminded married ever since.

Bob Orton Jr is one time professional wrestler who was best known with the ring name Cowboy. 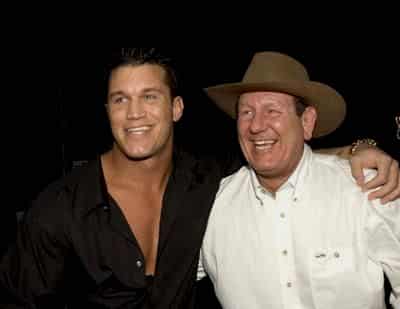 He had a successful wrestling career in WWE (then known as World Wrestling Federation WWF). In addition, he has made appearances for several wrestling promotions in Japan, the United States among other countries.

Nathan Orton is the younger brother of Randy Orton. Nathan who is best known as Nate is the skinnier and funnier version of his elder brother Randy.

Also, Nathan does comedy for a living. In addition, he has interests in playing guitar and activities that boost fitness. 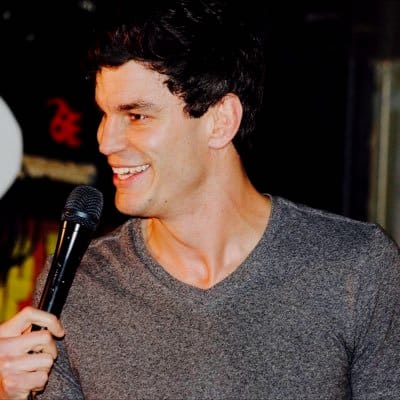 Orton has a number of nicknames that are largely inspired by his performances in wrestling Rings. The nicknames include: “The Legend Killer”, “The Viper”, “The Apex Predator”  and “Randy Boreton”. Others are  “The Silent Assassin”, “The Punter”, “ Mr RKO OUTTA NOWHERE!” and “Man of 1,000 Headlocks”

The third generation Wrestler does not limit his appearances to wrestling rings as he has appeared in a number of movies notable among which are: That’s What I Am (2011), 12 Rounds 2: Reloaded (2013) as well as WWE Studios film The Condemned 2. 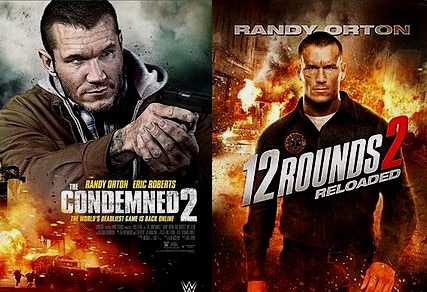 Randy was supposed to Feature in the action film The Marine 3: Homefront but was replaced by a fellow wrestler due to public outcry about his unsuitability for the role given his unwholesome past as a marine.

The spear move is to Roman Reigns just like the RKO is the signature move on Randy Orton. The move which is culled from his the Initials of his name (Randal Keith Orton) has proved to be a very effective manoeuvre that contributed to Randy’s rise to fame.

The extent to which Randy Orton cherished his Space was made known in 2017 when he rejected a fanboy’s request of getting a picture him at a gym in Jonesboro Arkansas.

Speaking about the incident the fanboy known as Martin recounts that:

“I approached him by myself and said, ‘Can I get a picture of you?,’” the fan, Anthony Martin, told the Northeast Arkansas Report. “He gave me a fist bump and replied, ‘Sorry. I can’t hear you,’ pointing to his earphones. We went our separate ways.”

Martin was not one to give up as he snapped a photo of Orton, a development which made  ‘The Viper’ lost his cool.

“He saw me snap the picture and came up to me got in my face and said, ‘What the [expletive] are you doing? I said no [expletive] pictures! Are you [expletive] stupid?’” Martin said.

Orton confirmed the incident by responding via a number of Tweets.

Apparently I hurt a fans feelings when I told him to F off at the gym yesterday. That's news? Been happening for 15 years. #getalife

I paid to train. In between every set, I can't take pics. He needs to suck it the F up and go to the gym to train not be a fan boy. https://t.co/I8rFn5N8qO

While a few wrestlers have been busted for using recreational and performance-enhancing drugs Randy Orton only has a documented history of using steroids.

His use of steroids was brought to the limelight in 2007 when Sports Illustrated published an article on its website detailing the widespread use of steroids in sports and wrestling.

It also revealed that Orton and some wrestlers allegedly obtained clomiphene citrate, anastrozole, and the steroids stanozolol, nandrolone, oxandrolone, and testosterone.

The allegations seem to hold water as Orton in 2015 once confessed to using a lot of drugs during the early days of his career. According to the WWE Superstar:

“All life was for me for a couple of years was how I was going to get f-cked up, it was pretty dark and gloomy and pretty sad. I had these problems, I had these things in my life that I was doing that could have potentially killed me”.

Randy Orton has the following traits to his personality.

Orton is Courageous as evident in his decision to force a move out of the marines corps. Randy is also determined, a trait which he exhibited to become one of WWE’s finest.

His desire to stop at nothing in achieving his Career goals saw him sustain injuries. The most popular is his collarbone injuries as well as a hypermobile shoulder. 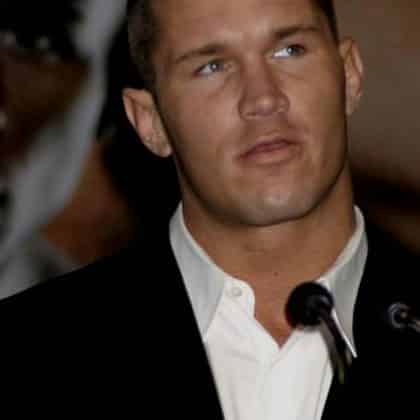 ‘Mr RKO‘ is also a passionate husband and father who loves to spend time with his family. As regards his dislikes, he hates violations of his privacy. As well as activities that do not make the best of his inborn talents.

FACT CHECK: Thanks for reading our Randy Orton Childhood Story. Plus untold biography facts. At ChildhoodBiography, we strive for accuracy and fairness. If you see something that doesn’t look right in this article, please place your comment or contact us!