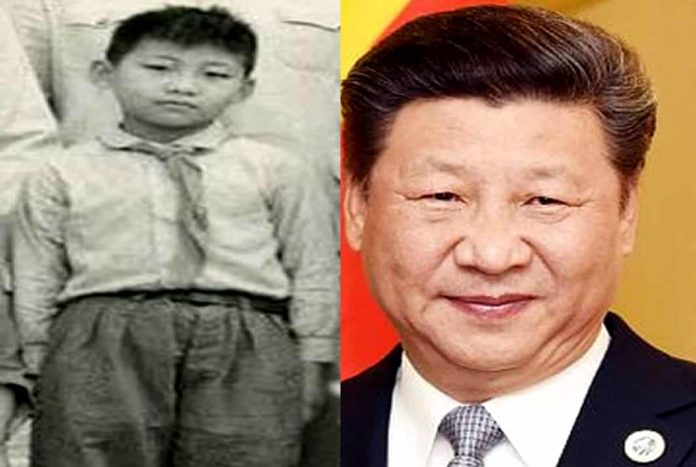 Here, we’ll detail a full analysis of the Chinese President’s Biography, one which gives you facts about notable events right from Xi Jinping’s early days to when he became famous.

Yes, everyone knows the Chinese politician is one of modern China’s most powerful leaders. However, it is just a few people that have read Xi Jinping’s Biography, which is quite insightful. Without further ado, let’s begin.

For Biography starters, Xi Jinping was born on the 15th day of June 1953 at the capital city of Beijing in China. He is the third of four children born to his mother, Qi Xin and to his father, Xi Zhongxun.

Young Xi grew up in Beijing, the city of his birth alongside two older sisters and a younger brother.

The sisters include Qi Qiaoqiao (eldest child of the family) & Qi Anan while Xi Yuanping is the youngest of the family.

Growing up in Beijing, Xi had a mix of moral and political upbringing. In fact, It would not be untrue to note that Xi grew up like a prince even though his parents were neither monarchs nor born of royalty.

Speak of Xi’s parents, his father Zhongxun was a prominent Chinese communist party leader. On the other hand, Xi’s mom – Xin was a member of the same party.

By virtue of Zhongxun’s leadership position in the party, Xi was known as a ‘princeling.’ The term (Princeling) applies to individuals who have a bright future in governance due to family connections.

Notwithstanding, Xi was of humble comportment in line with the instructions of his dad who taught him to be a lad of principles with a strength of character.

The childhood lessons were firmly part of Xi’s attitude and beliefs during his studies at Beijing 101 Middle School in the 1960s until the Cultural Revolution of 1966 brought about a disruption to his education.

The cultural revolution did not stop until 1976. It even saw Xi’s father thrown into prison.

At the same time, the then-teenager was sent on exile to work in a rural farming village because his dad was one among numerous Chinese people that were thought to have beliefs and habits which contradict the ideology of communism.

At some point during his exile, Xi took up residence in a cave house and was made to dig trenches.

The development made him become a tough individual with a sense of boldness, pragmatism, and idealism such that he became a member of the Communist Party of China on his tenth attempt in 1974.

Starting off, Xi went on to further his education at Beijing’s Tsinghua University where he read chemical engineering from 1975-1979, an endeavor he did combine with studying Marxism–Leninism–Mao Zedong thought as well as the workings of the People’s Liberation Army.

First was his first appointment as secretary of the then minister of defence Geng Biao. He was also made vice premier and secretary-general of the Central Military Commission.

The turning point of Xi’s political career came during the third quarter of 2007, when he was made a member of the Politburo Standing Committee. The Committee is one that is made up of the top leadership of the Communist Party of China.

With the appointment, Xi was a step closer to becoming the next paramount leader of China given his impressive track record.

Thus, it wasn’t surprising that the Chinese National Legislature made Xi vice-president of the People’s Republic of China during the 11th National People’s Congress in March 2008.

First and foremost, Xi did well to impressively represent national and party interests in the ensuing four years.

It wasn’t long before Xi was made President of the People’s Republic of China in a confirmation vote by the 12th National People’s Congress in Beijing on the 14th of March 2013. Fast forward to May 2020, Xi is still President of China.

In Asia and Eastern Europe, Xi, alongside Vladimir Putin (Russia), Benjamin Netanyahu (Isreal), and Volodymyr Zelenskyy (Ukraine), are among the most talked-about leaders.

He has, from the year of his ascendancy (2013) made progressive reforms. Also, his economic and foreign policies have made China a superpower nation of the world. The rest, as they say, is history.

It is a known fact that Xi has a busy schedule as both president and head of numerous parastatals. Notwithstanding, he has no problems with keeping a matrimonial home with his wife, Peng Liyuan.

The couples met in the 1980s through introductions by friends. Peng was at the time a prominent singer, while Xi was little known.

They became husband and wife in 1987 and have a daughter together known as Xi Mingze. She is the only daughter of the Chinese leader.

Not much is known about her save for the fact that she was a student of French at Hangzhou Foreign Language School and went on to study at Havard after a year of undergraduate schooling at Zhejiang University.

Did you know that Xi was formerly husband to Ke Lingling, the daughter of Ke Hua, who was China’s ambassador to the United Kingdom in the early 1980s?

The duo were at loggerheads with each other most times till they eventually went separate ways years later.

It takes a great family to raise a great leader like Xi Jinping. We bring you facts about Xi’s family members.

However, Zhongxun’s career was not rosy. He did he suffer setbacks in his political career but was nevertheless loyal to the real call of revolutionary communism until his death on the 24th of May 2002.

Qi Xin is the mother of the Chinese leader. She was born in November 1926 and has a military background.

First, for serving as a team leader at Cadre’s School in Changzhi County and for participating in the fight at Yincheng and Xihuo Town.

What’s more. The supportive mother of four is very much alive at the time of drafting this article on Xi Jinping’s biography.

Xi has two older sisters – Qi Qiaoqiao & Xi Anan – as well as a younger brother Xi Yuanping. Qi Qiaoqiao, the oldest of Qi’s sisters, is a businessperson and a former civil officer.

On his part, Xi Yuanping is the president of the International Energy Conservation and Environmental Protection Association at the time of preparing this draft on Xi Jinping’s biography. Meanwhile, not much is known about Xi’s other sister – Xi Anan.

Similarly, Xi’s paternal grandparents are largely unknown, while his cousins, aunts and uncle are yet to be made known.

However, we do know that his in-laws are Deng Jiagui (Qi Qiaoqiao husband) and Zhang Lanlan (Xi Yuanping’s wife).

Let’s move on to What makes Xi Jinping tick and the nature of his character beyond politics. Did you know that he is highly intelligent, imaginative, generous and emotionally in tune like individuals whose Zodiac sign is Gemini?

When Xi is not working, he can be found engaging his age-long interest and hobbies that include reading texts on philosophy, history, literature, culture. He also enjoys music and sports as well as spending a good time with his family and friends.

Did you know that Xi Jinping’s net worth stands at an estimate of $2 billion as of 2020? the bulk of Xi’s wealth comes from the wages and salaries that he has gotten in over 3 decades of public service.

Thanks to his position as Chinese paramount ruler, Xi cannot be found lacking in any necessity include assets like houses and cars.

Notwithstanding, he lives a humble lifestyle and encourages others, public official, to tread the same path through his anti-corruption policies.

To wrap up our Xi Jinping’s childhood story and biography, here are lesser-known or Untold facts about the politician.

Xi unofficially believes in Chinese Buddhism. However, he is not a devout believer. Xi’s regard for Buddhism is said to stem from the fact that he respects traditional Chinese religions and also China’s great history of which Buddhism is a part of.

Not many know that Xi’s political philosophies, generally known as “Xi Jinping Thought”, is a part of the Communist Party Constitution.

In fact, an app for studying Xi’s thoughts is one of the most popular smartphone apps in China.

Did you know that Xi is the first Chinese national leader with a PhD degree? He got his degree by studying Marxist theory and political education at Tsinghua University in Beijing.

Being the First of many:

It is worthwhile to note that Xi Jinping is the first paramount ruler to be born after the founding of the People’s Republic of China.

He is also the first Chinese leader to attend the world economic Forum. What’s more, he is the first leader – since Mao Zedong – to have his name written into the Chinese constitution while alive.

Thank you for reading this original write-up about Xi Jinping’s life story.

At ChildhoodBiography, we strive for fairness and accuracy in our consistent routine of delivering childhood biography of Politicians. Please stay tuned for more! The History of Robert Mugabe and Atiku Abubakar will excite you.

If you see anything that looks incorrect in this article, please contact us or place a comment below. Instead, would you be kind enough to tell us what you think about this write-up on Xi Jinping’s Biography?