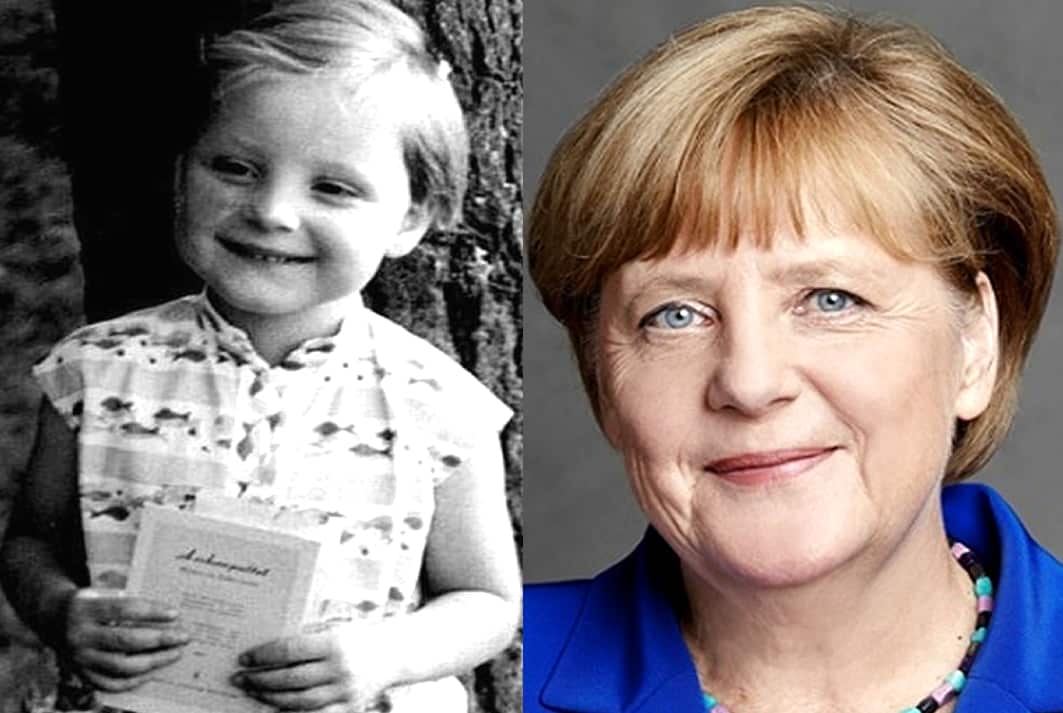 Childhood Biography presents the Full Story of a German politician with the nickname “Kasi”.

Our version of Angela Merkel’s Biography and Childhood Story brings you a full account of notable events from her childhood time to date.

More so, Angela Merkel’s Husband, personal life, family facts, lifestyle and other little-known facts about her.

Yes, everyone knows she is one of the most powerful female politicians in the world. However, only a few consider Angela Merkel’s Biography, which is quite interesting. Now, without further ado, let’s begin.

Starting off, Angela Dorothea Merkel was born on the 17th day of July 1954 at Hamburg in Germany. She was the first of three children born to her mother, Herlind Kasner, and to her father, Horst Kasner (a pastor). Behold, Angela Merkel’s parents.

The German national of white ethnicity with Polish roots was only three months old when her father was posted to a Lutheran church at Perleberg in the then East Germany.

As a result, the entire family moved with him to East Germany and settled at a rural area north of Berlin.

Growing up at East Germany alongside her younger brother, Marcus Kasner and sister, Irene Kesner, Angela had a happy childhood and was instilled with the mentality of being the best that she could be during her early life.

In addition, she learnt to play her cards close to her chest and not come off as too opportunistic or dogged. 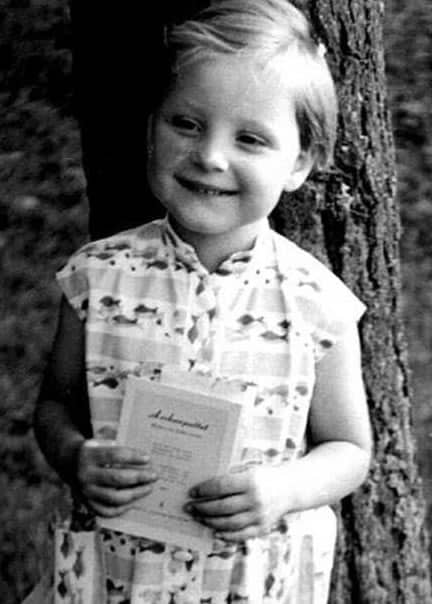 The educational background of Angela comprises her studies at a little-known high school. While at the school, Angela excelled in academics, especially math, science, and languages.

By the time Angela was in her mid-teens, she was encouraged by her parents to be politically aware in order to develop the skills required for a political career.

The then-teenager heeded to their advice and nurtured interests in politics even while studying physics at the University of Leipzig.

She went on to further her studies at the Central Institute for Physical Chemistry of the Academy of Sciences in Berlin-Adlershof.

Although Angela had been politically aware for years, it was in 1989 that she formally joined politics by securing membership in the new party, Democratic Awakening, after the fall of the Berlin wall.

The first job in her work history with the Democratic Awakening was unpacking boxes of new computers and preparing them for use at the party’s office.

It wasn’t long before she became a spokesperson for the party and helped renamed it to Allianz für Deutschland, or Alliance for Germany.

It was with the party that Angela won a seat in the Bundestag (lower house of parliament) representing Stralsund-Rügen-Grimmen. She also enjoyed political appointments courtesy of her former mentor and leader of the party, Helmet Kohl.

The political appointments first saw her serve as minister for women. She was later appointed as minister of the environment, a position she managed well by overseeing controversial topics like nuclear safety.

1998 was the year when Angela was appointed Secretary-General of the CDU following the defeat of Kohl’s Government.

Years later, she was elected as the new chairman of the CDU, a development which made her the first woman to lead a major German political party.

Not long after she began her campaign against the ruling Social Democrats leader, Gerhard Schröder and was declared Chancellor of Germany, the first woman to assume such position. The rest, as they say, is history.

Angela Merkel has been married twice at the time of writing. We bring you facts about her dating history and marital life.

To begin with, Angela is not known to have had any boyfriend before she met her first husband and fellow physics student, Ulrich Merkel, during a Russian exchange trip.

The estranged couples dated for months before getting married in 1977. Their union only lasted for a few years as they got divorced in 1982 without having kids.

Moving on, Angela married her second husband, Joachim Sauer and has been with him ever since.

Although no son(s) or daughter(s) was born of the relationship, Angela is step-mother to Joachim’s sons – Adrian & Daniel Sauer – from a previous marital relationship. 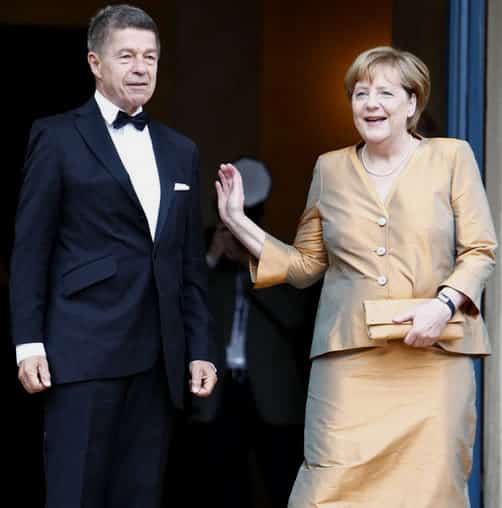 Angela Merkel was born into a middle-class family background. We bring you facts about members of her family.

Horst Kasner is Angela’s dad. He was born on the 6th of August 1926 and worked as a protestant theologian for the most part of his life.

Until his death in September 2011, Kasner was a supportive dad who supported Angela’s interests in politics.

Herlind Kasner is Angela’s mom. She was born on the 8th of July 1928 and worked as a teacher of English and Latin.

Herlind was particularly close to Angela and shared a close bond with her. Thus her death in April 2019 was a great loss to the politician who could use the moral support of a parent.

Angela Merkel has two siblings whom she grew up with at a rural area north of Berlin. The siblings include Angela’s brother, Marcus Kesner and her sister, Irene Kesner.

Marcus, born on the 7th of July, is a theoretical physicist. He lives in the German city of Darmstadt and teaches at the Institute for Theoretical Physics in Goethe University Frankfurt.

Meanwhile, little is known about Irene Kesner, who works as an occupational therapist as at the time of writing.

Away from Angela’s immediate family life,  her paternal grandparents were Ludwik Marian Kaźmierczak and Margarethe while her maternal grandfather and grandmother were Willi Jentzsch and Gertrud Alma respectively.

Meanwhile little is known about her uncles and aunts, same goes across the board for her cousins nieces and nephews.

What makes Angela Merkel tick? sit back as we bring you makings of Angela’s personality to help you get a complete picture of her.

To begin with, Angela’s persona is a blend of Cancer Zodiac traits. She is an introverted and covertly ambitious individual who thinks deeply before subscribing to any line of action.

In addition, Angela is skilled at making concessions in ways that do not compromise her interests.

Her hobbies include personal shopping, baking pies and reading. She also has interests in hiking and sports, particularly football. 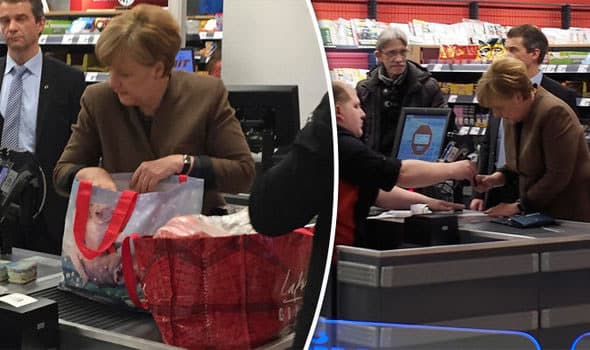 The German politician lives a conservative lifestyle and keeps matters of her personal and private life to herself.

Angela’s net worth is around $11.5 million as at the time of writing while the origin of her wealth including her salary and spending patterns are still unclear.

Asides her official residence at Federal Chancellery (Bundeskanzleramt) in Berlin, Angela has a private residence in the same German capital.

She rides in protected fleets as at the time of writing while little is known about her private cars collection.

To wrap up our Angela Merkel childhood story and biography here are some untold or little known facts that are rarely included in her bio.

Angela Merkel is not known to smoke but enjoys drinking beer. Credit: TDB and The Atlantic.

FACT CHECK: Thanks for reading our Angela Merkel Childhood Story plus untold biography facts. At childhood biography, we strive for accuracy and fairness in giving you Biography Stories of Politicians.

Kindly stay tuned for more related Politicians’ Biographies from us. The Childhood Story of Peter Obi, Bukola Saraki, and Adolf Hitler would interest you.