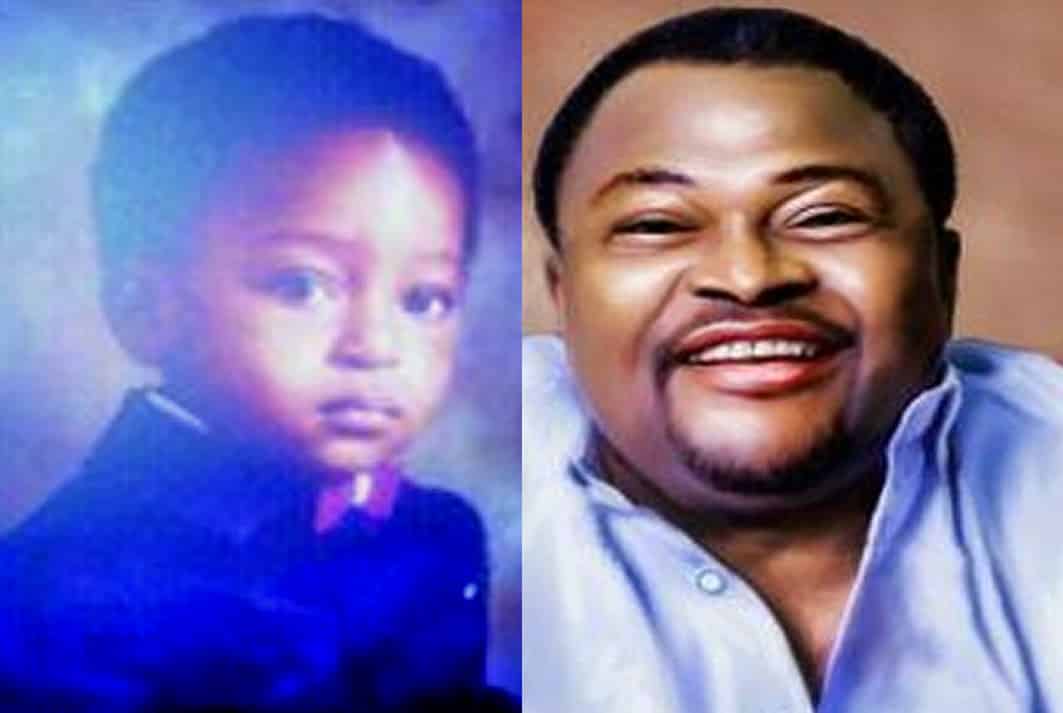 Childhood Biography presents the Full Story of a Nigerian Billionaire. He is best known with the nickname “John Bull“.

Our version of Mike Adenuga’s Biography Facts, including his Childhood Story, brings you a full account of notable events from his boyhood days. We then proceed to tell you how the Billionaire became famous.

The analysis of Adenuga’s Bio involves his early life, family background. His life story before fame, rise to fame story. Again, his relationship life, personal life, family facts, lifestyle. And other little-known facts about him.

Yes, everyone knows he alongside Aliko Dangote and Femi Otedola are one of Forbes’ richest people in Africa. Also, the fact that he has a versatile business orientation.

However, only a few consider Mike Adenuga’s Biography, which is quite interesting. Now, without further ado, let’s begin.

For Biography starters, Michael Adeniyi Agdolade Ishola Adenuga was born on the 29th day of April 1953.

The Billionaire was born to his mother, the late Omoba Juliana Oyindamola Adenuga (a businesswoman). And his late father, the Oloye Michael Agbolade Adenuga Sr (a school teacher).

Mike Adenuga’s birthplace is in the city of Ibadan, Oyo state Nigeria.

He is the youngest of five children. Born of the union between his parents; Omoba Juliana Oyindamola Adenuga and late Oloye Michael Agbolade Adenuga Sr.

The Nigeria national of West-African ethnicity hails from a middle-class family background as his parents lived a simple life. Mike Adenuga’s family origin traced from his maternal genealogy is of royal Ijebu descent.

He was raised at his birthplace in Oyo. This was where he grew up with his elder brother, Otunba Demola Adenuga. And three elder sisters; late Esther Olusola Osunsade Adenuga, Akande Otunba, and Yetunde Adegbola.

Growing up in Ibadan, Adenuga, like every other Yoruba kid, would make haste to complete his house chores after school and go over to support his mom at her business place while he gradually learns the trade.

Owing to the busy nature of the city of Ibadan, Adenuga had the opportunity of growing in the craftsmanship of handling business in both large scale and small scale.

Early on, Mike Adenuga’s daily routine at his mother’s business place did not affect his academic activities as it is the norm for every kid whose parents run a business in Ibadan to go over to the business place every day in order to learn the trade after school.

During his secondary school days, Adenuga acquired enough knowledge that could help him start up a small business independently.

Not long after his graduation from comprehensive high school, mike Adenuga saw the need to advance his knowledge in business as well as independently establish his own personal business.

His conviction of gathering more intellectual knowledge in business made him enrolled at the Northwestern Oklahoma state university and Pace university in new york where he acquired his degrees in business administration. 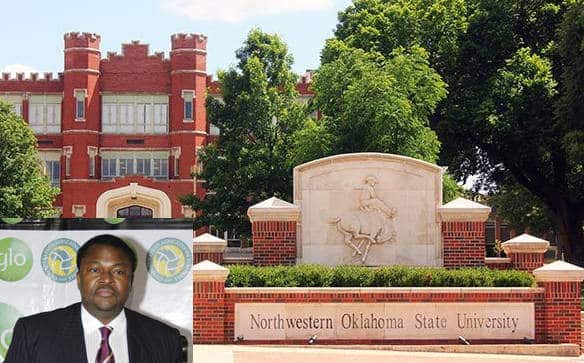 He took up this business in order to help fund his education without the need of becoming a burden to any of his family since his fees were quite expensive.

Upon completion of his studies abroad, Mike Adenuga who was then 26 years old returned to Nigeria and took over his mother’s sawmill business.

He also carried out other businesses which include trading and distribution of Coca-cola, lace, and other textile materials.

After acquiring degrees in business administration, Mike Adenuga decided to go into a full-time business.

He ventured into oil and gas which led him to create his oil company; consolidated oil now known as Conoil. He soon delved into the telecommunication business and was issued a GSM license in 1999.

To his greatest disappointment, the GSM license which he had acquired was sadly revoked after some time.

The revocation of his GSM license halted a lot of his telecommunication business to a very large scale. This became one of the tragic moments in the history of the successful businessman. 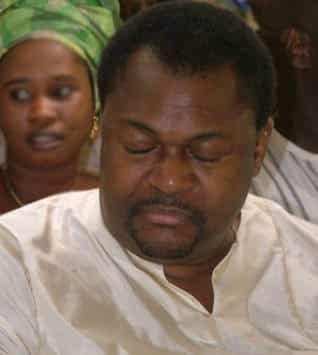 Following the revocation of his GSM license, Mike Adenuga continued other business endeavours with an optimistic mind and in 2003 when the government-held another auction, he received the GSM license for the second time.

The license helped him to strongly establish his Globacom telecommunication company which soon rise to prominence, spreading throughout different west African countries like; Benin, Ghana, and Cote d’Ivoire.

Fast forward to the time of writing, Mike Adenuga still remains the second richest man in Africa and is still an astonishing business prodigy. He has received numerous awards since his rise to fame.

He was awarded the Grand Commander of the Order of the Niger (GCON) by President Goodluck Ebele Jonathan in 2012.

Mores so, he has received other notable awards such as the commander of the Legion of Honour as well as the 100 distinguished and Eminent Nigerians Centenary Awards in 2018. The rest, as they say, is history. 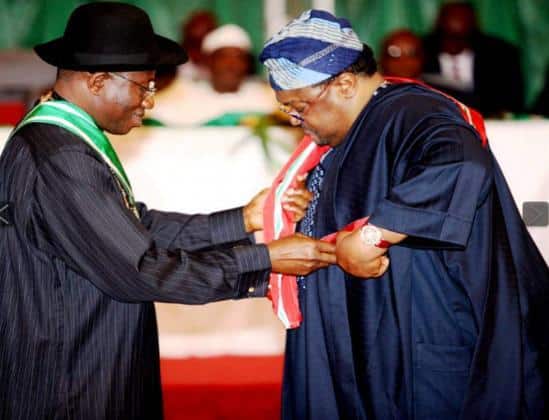 Regarding his relationship status, Mike Adenuga is married at the time of writing. Adenuga has been involved in a series of relationships with different partners since his rise to fame.

The most notable amongst all is the marriage between him and Mrs. Adefolake Emilia Adenuga (nee Marquis) which gave rise to the birth of his six children namely; Adetutu Oyindamola Emilia, Eniola, Folashade Adeniyi, Prince Michael, Tunde, and Abimbola.

Adenuga’s marriage to Adefolake ended after some years as a result of reasons that remained undisclosed to the general public. 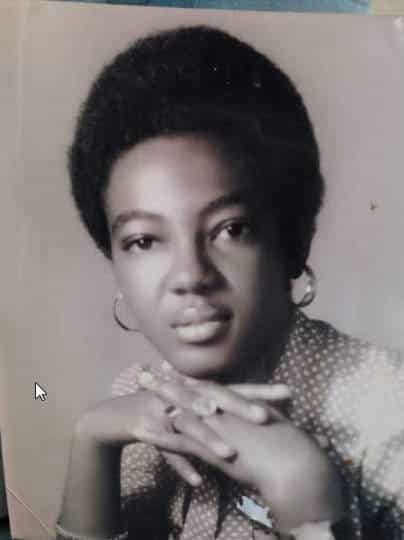 Mike Adenuga is married to Titi Joyce Adenuga at the time of writing. His marriage to Joyce gave rise to the birth of their beautiful daughter, Belinda Olubunmi Ajoke popularly known as Bella.

Mike Adenuga met his wife titi at the defunct Devcom Merchant Bank when she was searching for a job. Her countenance captivated Adenuga’s heart and today they are happily married. 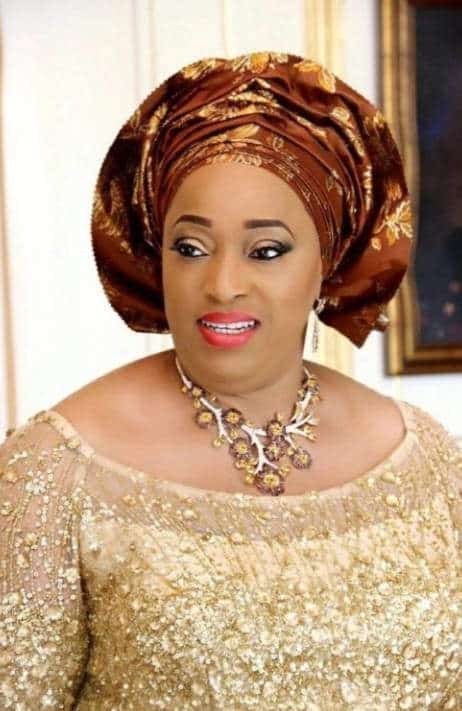 Mike Adenuga now has seven children at the time of writing. He ensures that all his children are well educated and also get to learn about his business establishments.

Mike Adenuga comes from a middle-class family background before he rose to become Africa’s, second-richest man. Here, we bring you facts about his family life.

Late Michael Agbolade Adenuga Sr. was Mike Adenuga’s dad. He was trained at St. Andrew’s College, Oyo and later proceeded to study at the Institute of Education, Exeter University in England.

Upon his return to Ibadan, he became a schoolteacher who worked tirelessly to impact knowledge in the life of a lot of children as well as his son Mike. He later loses his life to the cold hands on the 7th day of June 1979. 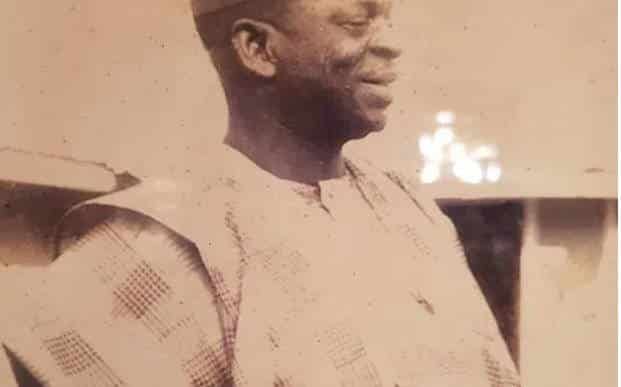 late Juliana Oyindamola Adenuga (nee Onashilev Of Okesopin, Ijebu Igbo) was Mike Adenuga’s mom. she is a businesswoman who supports her family by running her own sawmill.

After the tragic death of her husband, she assumed the responsibility of becoming the breadwinner of the family and took care of her children from the proceedings that arose from her business. She died a few months after celebrating her birthday in 2005.

Away from Mike Adenuga’s immediate family, his paternal grandparents were David Oba Adenuga and Eunice Banwo Adenuga who both hail from Ijebu Igbo. Not much is known about his maternal grandfather, grandmother, uncles, aunts, nephews, and nieces.

Away from mike Adenuga’s business endeavours, we bring you facts of his personality in order to help give you a complete picture of him. To begin with, Mike Adenuga’s persona is a blend of Taurus.

He is a philanthropist whose hobbies and interests have been geared towards helping the poor and less privileged. He is also a patriotic citizen of his country who always supports his country in ensuring that its economy grows.

Adenuga displayed his interest in his country’s development when he offered $1 million to the super eagles and $200,000 to their coach for winning the 2013 nations cup. 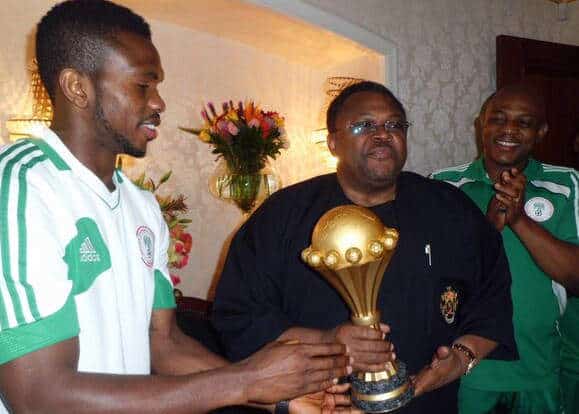 Mike Adenuga is worth an estimated sum of $9.4 billion at the time of writing. Surprising as people would say that he who was a taxi driver has risen to such heights of wealth.

His wealth today is a reflection of his hard work and diligence which he channeled into his business endeavors.

Mike Adenuga’s assets are numerous and scattered across the globe. to begin with, he owns a house at Banana Island in Lagos, Nigeria.

His mansion is extremely large enough to accommodate both his family and other people who may visit him for business meetings.

Mike Adenuga also has a series of different brands of cars in his car collection. The cars include; an Armored Bentley Mulsanne worth $110.5 million, a Mercedes-Maybach S-class worth $72.1 million, a Mercedes Benz AMG C63 worth $24.3 million, and a Rolls Royce Phantom worth $151.6 million.

To wrap up our Mike Adenuga childhood story and biography, here are some lesser or unknown facts about the businessman which you help you grasp a complete picture of him.

Mike Adenuga is a Christian and upholds his belief in God whom he regards as the source of all he had ever come to possess in life. His conviction to worship God is so strong that he raised all members of his family in the same Christian faith as him.

Adenuga has not inked any tattoos on his body. As a result of his ethnicity and his religious ethics which frowns against inking tattoos on the body, Mike Adenuga has diligently made up his mind not to violate his moral code of conduct.

Not much information is known regarding whether Mike Adenuga drinks or smokes. This is due to the fact that he had not given any interview regarding this aspect of his life.

Thanks for reading our Mike Adenuga Childhood Story plus untold biography facts.

At childhood biography, we strive for accuracy and fairness while delivering the Biography of African Celebrities. If you see something that doesn’t look right in this article, please place your comment or contact us!