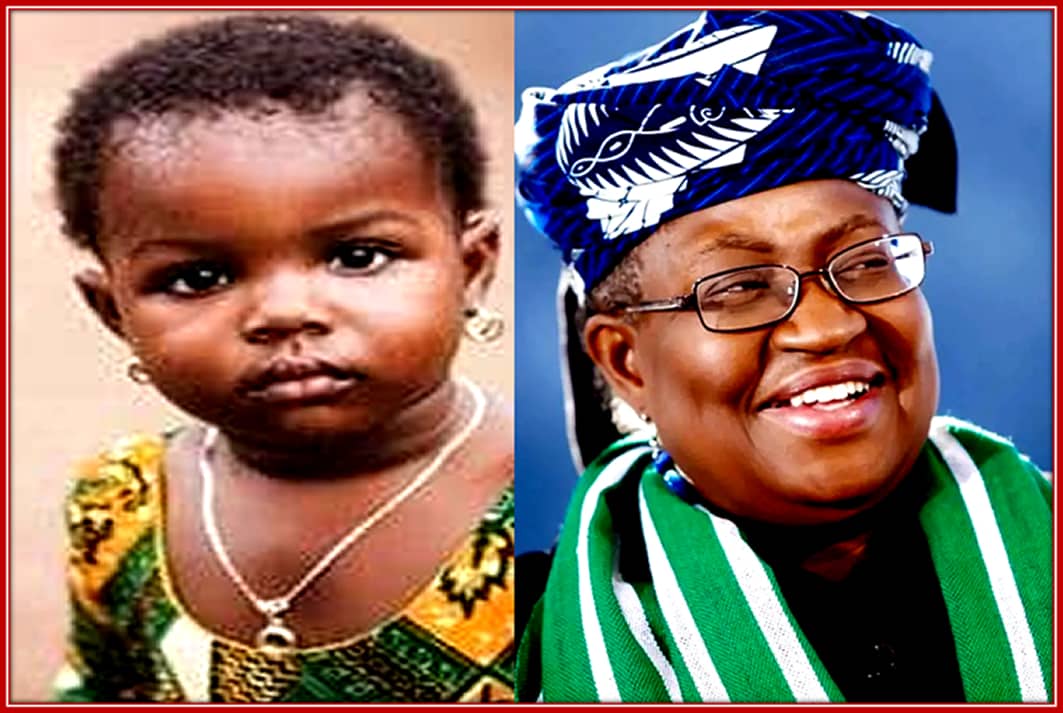 Simply put, we present you with the economist’s life story, from her early days, to when she became famous.

To whet your biography appetite, here is her childhood to the adult gallery — a perfect summary of Ngozi Okonjo-Iweala Bio.

Yes, we all know that she was named the Director-General of the World Trade Organization (WTO) in 2021.

However, only a few of her fans know about Ngozi Okonjo-Iweala’s Biography, which is quite interesting. Without much ado, let’s begin.

Starting off, she bears the nickname “Okonjo-Wahala”. Ngozi Okonjo-Iweala was born on the 13th day of June 1954 to her mother, Prof. Kamene Okonjo and father, Prof. Chukwuka Okonjo in Ogwashi-Ukwu, Delta State, Nigeria.

She came to this world as the eldest of four children born of the union between her parents pictured below.

Before the Nigerian civil war, which broke out in 1967, Ngozi spent part of her childhood days in a southern village with her grandma.

Back then, her parents traveled to study in Germany. Upon their return to Nigeria, the Biafran war started. Hence, the young lass ended up witnessing the most tragic conflict of Nigeria.

As a little girl, Ngozi was a passionate kid who had an excellent surviving instinct. With her willpower, she saved one of her younger siblings from the glimpse of death because of malaria during the war.

Do you know?… Ngozi walked 10km with her dying sister on her back to a clinic in a church. It all happened when her father was still serving as a soldier in the war, and her mother was ill.

The economist hails from a royal household that had a great interest in education. To be more precise, her father was the Obi (King) of Ogwashi-Ukwu from the Obahai Royal Family.

Thanks to her Family Background, Ngozi attended some prestigious schools. Also, she had no financial problems during her upbringing.

Sadly, her parents lost most of their assets during the civil war. But after the entire ordeal, they sprang back to their founding glory and recovered all they had lost.

With her level of influence in the financial societies, many people kept wondering what part of the globe she belongs to. In a feat to provide an answer, our team found out that Ngozi enjoys the privileges of dual citizenship.

Apparently, she is a native of Nigeria by birth. On the other hand, she became a citizen of the US through Naturalization in 2019.

What’s more?… Her place of origin (Ogwashi-Ukwu, Delta State) is home to the Jay-Jay Okocha Stadium and Abu Ano Market at Ishekpe.

Thankfully, her parents turned a deaf ear to the norms of societal prejudice in female education.

Hence, they set a good academic foundation for Ngozi and her siblings (Njide, Ifechukwude, and Onyema). This feat made the young lass enroll at Queen’s School in Enugu at a tender age.

For the most part of her early life, Ngozi attended St. Anne’s School as well as the International School in Ibadan.

Just when she clocked 19 did the opportunity to further her studies opened up to her in the US.

Utilizing this rare privilege, Ngozi enrolled to study at Harvard University. After three years, she graduated with an AB in economics in 1976.

Because Ngozi was a visionary woman, she didn’t have to stop at just getting a degree. For the records, she wanted to accomplish more.

Hence, she enrolled to further her studies at the Massachusetts Institute of Technology. There she obtained her Ph.D. in regional economics and development in 1981.

Out of sheer luck, she started working as an intern at the World Bank in Washington DC. Funny enough, Ngozi was diligent in documenting even the slightest financial analysis. In no distant time, she worked her way into prominence.

Do you know?… Ngozi served as the development economist at the world bank in Washington DC for two decades. Afterward, Former President Olusegun Obasanjo appointed her as Nigeria’s Minister of Finance in 2003.

While in office, Ngozi came up with a different initiative that helped maintain transparency in the government. It was not too long before she made a grand return to the world bank as the vice president in 2007.

Hard work, as they say, will often breed success. In the same vein, Ngozi’s expertise did not go unnoticed.

In 2011, Former President Goodluck Jonathan also appointed her as Nigeria’s Minister of Finance for the second time. This made her the first woman to hold such a position in the country.

The 15th of February 2021 remains a vital date in Ngozi’s Biography she would never forget. It was the day she was appointed as the Director-General of the World Trade Organization.

Prior to her appointment, she vowed to bridge the divide between the US and China on trade. The rest as they say is history.

Rarely will you stumble across a heartwarming love story of an influential personality like that of the ex-Finance Minister.

No doubt, Ngozi is married at the time of writing her Biography. Her husband is Dr Ikemba Iweala. Like her, he also has a profound love for knowledge.

One amazing fact about the couples is that they have loved each other right from when they had little or no riches.

Of course, their respect for each stood the test of time. Hence, it made them an idol to so many young couples in Africa.

Below is a picture that proves their inseparable commitment to each other, both in good or bad times.

As the popular saying goes, the apple does not fall far from the apple tree, so also did her kids take after their father’s dealings.

Two of Ngozi’s sons (Uzodinma and Uchechi Iweala) as well as her only daughter Onyinye Iweala are doctors like their dad.

Conversely, her son (Okechukwu) took a different path. Hence, he became a graduate of Social Studies.

What makes the 7th Director-General of the World Trade Organization thick? To begin with, she’s got the makings of the Gemini zodiac trait.

Don’t get too surprised if you ever see her buzzing between happy hours and dinner parties. Truth is, her intelligence did not restrict her from being quite a playful icon.

Also, Ngozi is an outspoken woman, no doubts about that. She is equally a deep thinker. In most meetings where international matters are discussed, the economist keeps a cheerful face while she thinks about the best suggestions to be made.

Ngozi Okonjo-Iweala Net Worth and Lifestyle:

First of all, she is not as wealthy as Mike Adenuga. However, most wealthy Nigerians will hardly measure up to her level of influence.

Perhaps you didn’t know that Forbes listed her as the #48 Power Women in 2015. However, her name was later dropped off in 2016.

At the time of compiling this Bio, Ngozi has amassed an estimated Net Worth of $5 million (2021 Stats). Of course, she owns many houses and cars.

However, the house Pictured below is listed as one of her most famous mansions worth $3.15 Million in Abuja.

Right from her childhood days, the economist sees her household as the greatest source of her motivation.

Of course, her parents and siblings have helped her accomplished lots of success in life. Hence, we present you with facts about every member of her family.

Life would have been nearly impossible to survive if not for her dad’s resilience and hard work. Before I proceed with a glimpse of his Life Story, Ngozi’s Father is Prof. Chukwuka Okonjo.

As earlier mentioned, he was the King of Ogwashi-Ukwu while he was alive. Prof. Chukwuka raised all his children with an appropriate educational background.

Sadly, he lost his life (at 91 years) to the cold hands of death in September 2019. Do you know?… Ngozi’s father served as the Brigadier of the Biafran army in the 1967 Nigerian civil war.

Great mothers have produced successful children, and Ngozi’s mom is not an exception. Her name is Kamene Okonjo, and she is the mother of four children.

Thanks to her, Ngozi learned how to deal with vicious challenges with full confidence.

There was a time when Kamene was abducted by 10 armed men. It all happened in December 2012.

However, she was released after five days in exchange for a ransom. As I compile this Biography, Kamene has been appointed the professor of sociology.

Of course, the ex-minister has three younger siblings that are also successful. Are you aware?…

Ngozi’s only sister (Dr Njide Okonjo-Udochi) emerged as the Family Physician Of The Year 2021 in Maryland, US. Hence, she becomes the first black female to do so in history.

Shortly after their father’s death, Ifechukwude Chukuka Okonjo (her brother) succeeded him as King. While her youngest sibling, Onyema Okonjo, is the founder and CEO of Giant Beverages.

There is a huge possibility that her grandmother and grandfather have also kicked the bucket. This is possibly one of the major reasons she seldom talks about them.

No doubts, her uncles, aunts, and other relatives are glad to see her achieve great things in her career endeavors.

To wrap up her Bio, here are a few facts about her that would help you get a complete knowledge of her Life Story.

The 7th director-general of WTO is unique in her own way of dressing. She often stands out with her style of fashion. No doubt, she is noticeable in her bead necklace and spectacularly designed Ankara wears.

Moreso, her way of styling her Gele (head tie) has captivated the attention of many young ladies in Africa.

What’s more?… Some of her fans mimicked her dressing pattern when she was named the Director-General of the World Trade Organization (WTO) in 2021.

Guess what?… Ngozi has got a great talent for writing. Over the years, she has published 5 books and many more articles. Some of her published writeups are; Reforming the Unreformable (2012) and Chinua Achebe: Teacher of Light (2003).

Coming from a religious country had a lot of effect on Ngozi’s beliefs. Yes, she is one of the many people who balance their spirituality with other social aspects of their life. No doubt, Ngozi is a Christian and has raised her kids under the moral codes of her faith.

The appointment of Ngozi to lead the WTO was almost thrown into doubt after the US opposed the move. According to bbc.com, the United States believed South Korea’s Yoo Myung-hee could handle global trade better than Ngozi.

In her life journey, Ngozi would have probably been unable to surpass some certain challenges if not for her father and mother. Of course, her parents laid a solid academic foundation for her.

However, it was her hard work that has helped her accomplished so much in life. It behooves us to commend her entire Family for supporting her throughout this rigorous journey. The truth is, they are the reason why she never gave up on her dreams.

Thank you for reading our Life Story of Ngozi Okonjo-Iweala. Kindly contact us if you see anything that isn’t right with our articles. Otherwise, please take a quick look at her Wiki in the table below.

DISCLAIMER!! ChildhoodBiography DOES NOT claim ownership of any pictures posted on its website. Again, we do not host pictures or videos ourselves. Our authors only link to the rightful website(s) who are responsible for their photos. Lastly, we have carefully considered and reviewed all of our content. Despite that, it is possible that some information might be outdated or incomplete.
© Copyright @2022
error:
wpDiscuz