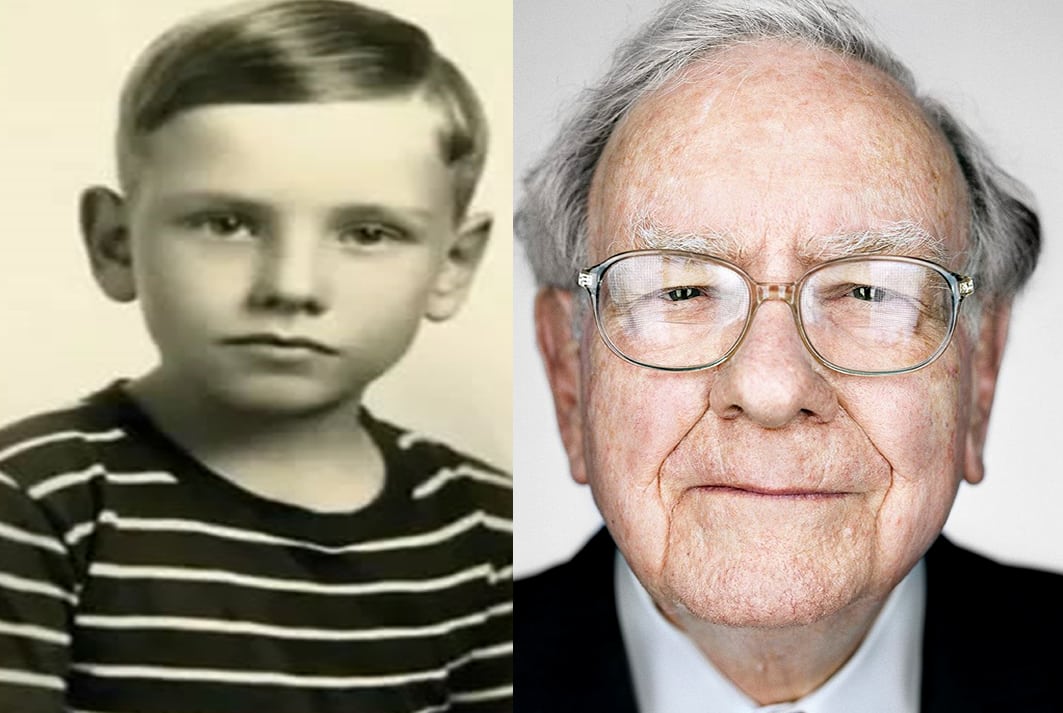 Childhood Biography presents the Full Story of an American Billionaire with the nickname “Oracle of Omaha“.

Our version of Warren Buffett Biography and Childhood Story brings you a full account of notable events from his childhood time to date.

The analysis of the CEO of Berkshire Hathaway involves his early life, life story before fame, family background and personal life. More so, other OFF and ON-Screen little-known facts about him.

Yes, everyone knows he is one of the most successful investors in the world. However, only a few consider Warren Buffett’s Biography, which is quite interesting. Now, without further ado, let’s begin.

For Biography starters, Warren Edward Buffett was born on the 30th day of August 1930 at Omaha, in Nebraska, U.S.A. He was the second of three children born to his mother, Leila Buffett and to his father, Howard Buffett.

The American national of White ethnicity with Scandinavian and American roots came from a rich family background and was partly raised in his hometown in Omaha, Nebraska.

Growing up in Nebraska alongside his older sister, Doris Buffett and his younger sister, Roberta, young Buffett was interested in Business from a very young age.

Buffett was only aged 6 when he purchased 6-packs of Coca-Cola refreshments to resell for profit.

By the time Buffett was aged 11, he made his first big investment by purchasing three shares of Cities Service at $38 per share.

The Stock fell not long after he made the purchase. Frightened, Buffett held on to his shares until they rebounded to $40.

Relieved with the rebound, Buffett quickly sold his shares, a mistake he would later regret as Cities Service shot up to $200.

Thus, Buffett learnt patience is vital to making and keeping investments, a lesson that would guide him in making subsequent deals.

Buffett’s educational background includes his studies at Rose Hill Elementary School. While at the school Buffett combined academics with selling gums and soda.

The business prodigy was still studying at the school when his father Howard got elected in the United States Congress.

As a result, the entire family moved to Washington, D.C where Buffett completed his basic education at Alice Deal Junior High School.

His significant investment at the time was partnering with a friend to purchase a used pinball machine for $25.

The machine which was installed at a barbershop yielded profits that enabled Buffett and his friend buy and install other machines at different locations.

Buffett later sold the business for $1,000 before graduating from high school in 1947.

Upon graduating from High school in 1947, Buffett had no intentions to attend college. The then-teenager who had had already saved $5,000 from delivering newspapers wanted to become a full-time businessman.

His father, however, urged him to attend college, beginning with Wharton Business School at the University of Pennsylvania.

Buffett studied at the school for two years before securing a transfer to the University of Nebraska, where he graduated with a Bachelor of Science degree in Business Administration.

Subsequent academic pursuits saw Buffett rejected by Harvard Business School on the grounds that he was too young.

Thus, he got enrolled at Columbia Business School of Columbia University where he had the privilege of attending classes lectured by his mentor, Benjamin Graham, the “father of value investing.”

He graduated from the school in 1951 and went on to conclude his quest for knowledge at the New York Institute of Finance.

Armed with sufficient knowledge in business and financing, Buffett chose to temporarily suspend making personal investments. He instead worked as an investment salesman at his father’s company, Buffett-Falk & Co between 1951-1954.

Though extremely young, Buffett considered himself a voice to be heard by offering investment advice which was published on a daily.

By the time of the closure, Buffett had already made a huge amount of money and started his own partnership called Buffett Partnership Ltd.

Buffett went on to operate several other partnerships and became a millionaire in 1962 due to his earnings from his diverse partnerships.

At the same time, Buffett gradually bought shares at a textile manufacturing firm – Berkshire Hathaway until he became the firm’s largest shareholder and eventually took control of it.

The business magnate merged his diverse partnerships to become one under Berkshire Hathaway.

He gradually added more partnerships to Berkshire Hathaway and eventually made it an American multinational conglomerate holding company.

Buffett was relatively unknown until 1986, when he made his first billion and led Berkshire Hathaway to purchase a 12% stake in a scandal-ridden company, Salomon Inc.

The investment which is still held to date, is one of Berkshire’s most lucrative deals. The rest, as they say, is history.

Warren Buffett has been married twice. We bring you details about his dating history, marriage and current marital relationship.

Starting off, Buffett is not known to have dated any woman before he met his first wife, Susan Thompson.

Buffett and Susan were introduced to each other by his younger sister, Roberta. The estranged couples dated for months before they got married in 1952 at the Dundee Presbyterian Church in Omaha.

Their marriage was blessed with three children who include:

1. Susan Buffett (born in 1953). Susan works as a philanthropist and serves as chairperson of the Sherwood Foundation.

3. Peter Buffett was born in May 1958. Peter is the artistic member of the family and an Emmy Award-winning musician. He is also a composer, author and philanthropist.

Susan and Buffett were separated in 1977 after the former left her billionaire husband with hopes of pursuing a singing career in San Francisco.

Although Buffett supported her decision, he was heartbroken about it. The duo remained close and never remarried until Susan’s death in 2004.

Two years after Susan’s death, Buffett got married to his longtime companion, Astrid Menks. It is interesting to note that Menks was introduced to Buffett by his ex-wife Susan before she left him in 1977.

Thus, Menks lived with Buffett at his home in Omaha for many years before they made their union official in 2006. Meanwhile, No child has been born of their union. 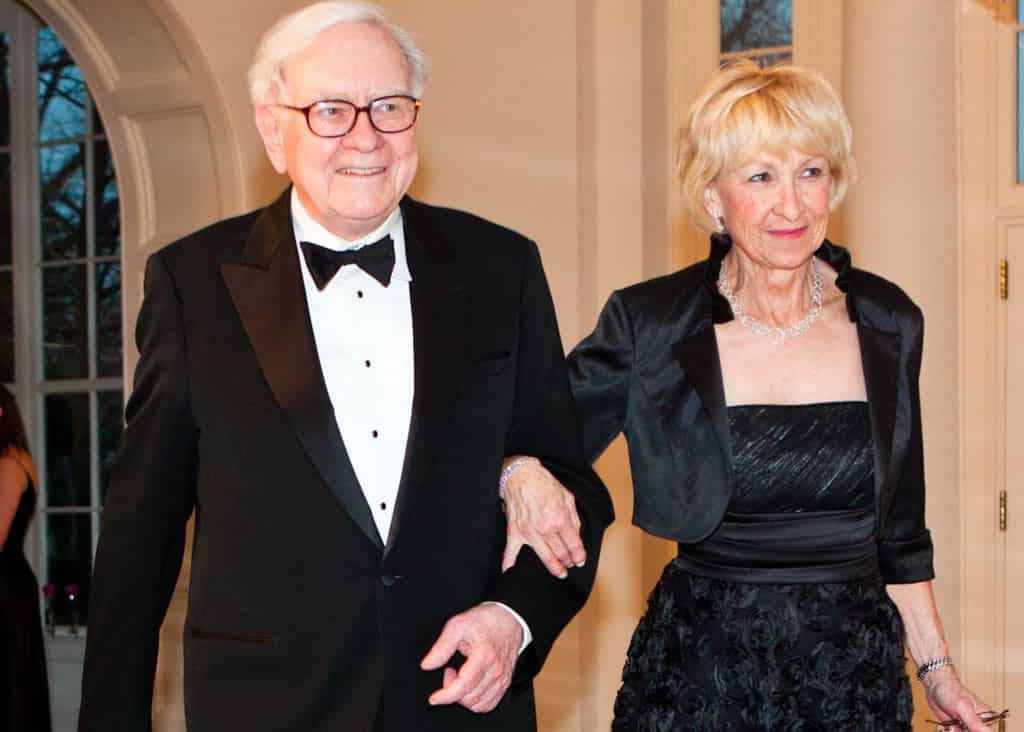 Warren Buffett was born into a family of 5. We bring you factual details about members of his family.

Howard, born on the 13th of August 1903, is Buffett’s father. He was an American businessman, investor, and a four-term Republican United States Representative for the state of Nebraska.

He is credited for urging an ambitious young Buffett to attend college and get degrees in business studies before becoming a full-time investor. He lived long enough to see Buffett become a millionaire before his death in 1964.

Leila Stahl is Buffett’s mother and the least-known member of the Buffett’s family. The supportive mother got married to her husband Howard on the 27th of December 1925 and helped raise Buffett and his siblings as Presbyterians.

Buffett has two siblings who he grew up with. They include his older sister, Doris Buffett and a younger sister, Roberta Buffett.

Unlike Buffett, both sisters (Doris Buffett and Roberta Buffett) did not venture into business but are greatly involved in philanthropy.

His maternal parents were John Ammon Stahl and Stella Frances Barber. He also has an uncle named Howard Homan Buffett, a nephew called Alex Rozek as well as a number of grandchildren.

What makes Warren Buffett tick? sit back as we bring you makings of his personality to help you get a picture of him.

To begin with, Buffett’s personality is a blend of ISTJ (Introversion (I), Sensing (S), Thinking (T), Judgment (J)) traits. He is introverted but notwithstanding, lives in a real world where he is aware of issues that may or may not be of great concern to him.

Buffett is also an independent thinker who thinks years into the future and follows a strict path to achieve the goals he set for himself.

His hobbies include reading, exercising, playing the ukulele as well as playing bridge games to improve on his ability to exercise patience.

Warren Buffett ranks among the top richest men in the world with a net worth of 83.6 billion USD. However, he lives a humble lifestyle which portrays him as an extremely frugal individual.

To begin with, the billionaire still lives in the house he acquired for $31,500 at Omaha, Nebraska. “I’m happy there,” he stresses.

“I’d move if I thought I’d be happier someplace else. How would I improve my life by having ten houses around the globe? I’m warm in the winter; I’m cool in the summer. It’s convenient for me.”

Reports also have it that he turned a dresser drawer into a baby’s bassinet when he first child was born and borrowed a crib for use by the second child.

In the same light, Buffett doesn’t spend on cars. He drove a Volkswagen for years before his wife helped upgrade him to a Lincoln Town car.

Buffett wasn’t comfortable with such luxury and auctioned it off for charity purposes in 2007. His latest acquisition is a Cadillac XTS which he bought in 2014 at a retail price of around $45,000.

Interestingly, the 80-year-old doesn’t have a computer on his desk and uses a flip phone instead of a smartphone.

Buffett earned 94% of his wealth after attaining the age of 60. At some point in 2013, Buffett made $37 million a day due to rising stock prices within the period.

He loves ice cream and drinks lots of Coca-Cola Refreshments. In addition, he eats more canned potato sticks and accompanies them with soda.

Buffett was in 2012 diagnosed with prostate cancer but beat the terminal disease months later and has remained healthy to date.

He used to be a terrible public speaker until he took a $100 Dale Carnegie’s course on public speaking. The course did not only help him propose to his wife but made him a proficient public speaker.

Although Buffett was raised as Presbyterian, he doesn’t follow any religion and identifies as an agnostic.

Thanks for reading our Warren Buffett Childhood Story, plus untold biography facts.

At ChildhoodBiography, our team strive for accuracy and fairness in our quest to deliver you Billionaires’ Biographies.

Please stay tuned for more related articles in our Billionaire listings. You may find some interest in the childhood story of Rory John Gates, Elon Musk, Bill Gates and Jeff Bezos.