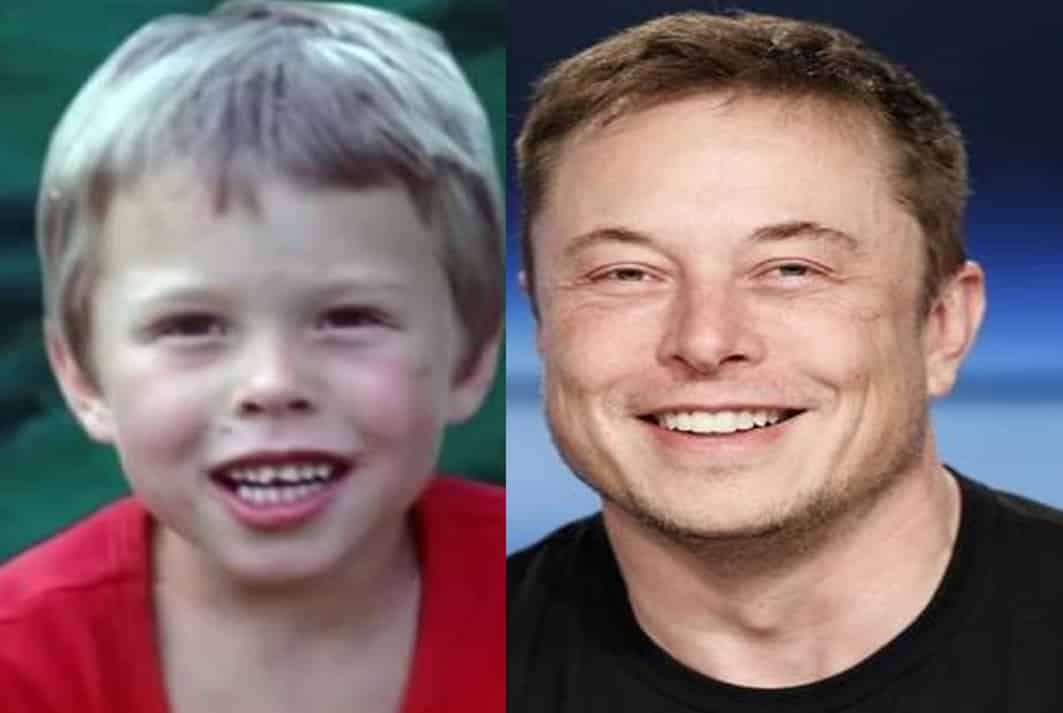 Childhood Biography presents the Full Story of a Technology Entrepreneur who is best known with the nickname “Iron Man“.

Our Elon Musk Childhood Story plus Untold Biography Facts brings you a full account of notable events from his childhood time to date.

Yes, everyone knows he is one of the greatest and most prolific modern inventors. More importantly, he bought Jack Dorsey‘s Twitter. However, only a few consider Elon Musk’s Biography which is quite interesting. Now, without further ado, let’s begin.

For Biography starters, Elon Reeve Musk was born on the 28th day of June 1981 at Pretoria in Transvaal, South Africa.

He is the eldest of three children born of the union between his father Errol Musk (an electromagnetic engineer) and his mother Maye Musk (a model and dietitian).

Growing up in Pretoria alongside his younger brother, Kimbal and sister, Tosca, young Musk was an introverted kid and a deep thinker.

So intense was Musk’s introversion that his mother feared he might be deaf.

In addition, Musk was an avid reader and computer enthusiast who taught himself how to program. By the time Musk was aged 12, he created his first software – a video game – called Blastar and sold it for approximately $500.

Musk’s educational background comprised of his studies at Waterkloof House Preparatory School before he progressed to Bryanston High School. He completed his secondary education at Pretoria Boys High School.

While at the respective institutions, Musk was a good kid who did his best to stay out of trouble however his school days were ruined by bullies who pounced on him at any given opportunity.

At the height of such attacks, Musk was thrown down a flight of stairs and smashed his head on the hard pavement during descent.

He immediately lost consciousness and was hospitalized with a severely broken nose that was corrected via a nose job.

He studied at the college for two years and got transferred to the University of Pennsylvania in the U.S. where he obtained degrees in economics and physics.

Thereafter, the tech prodigy headed to Stanford University in California to pursue a PhD in energy physics, but dropped out after just two days of classes to become an internet entrepreneur.

The first stop in that regard was starting a web software company, called Zip2 Corporation in 1995.

The company which was started by Musk and his brother Kimbal via money raised from angel investors developed and marketed an Internet city guide for newspapers and the publishing industry.

Musk struggled to keep Zip2 afloat including selling majority control of the company to venture capitalists in exchange for a $3.6 million investment.

Zip was eventually acquired by Compaq, which paid Musk US$22 million and settled other board members accordingly.

Moving on, Musk Started an online financial services and e-mail payment company called X.com in 1999. The company was one year later merged with Confinity, which had a money-transfer service called PayPal.

Upon the merge, X.com and PayPal became one company named PayPal with a focus on making the company a global payment transfer provider.

Paypal was eventually acquired by eBay for US$1.5 billion, of which US$165 million was paid to Musk.

Musk was relatively unknown until he founded his third company known as Space Exploration Technologies or SpaceX in 2002.

The company which is still owned by Musk develops rocket technology and builds spacecraft for commercial space travel.

Before SpaceX could be fully established in 2008, Musk co-founded Tesla Motors, of which he is the sole product architect.

Through Tesla, Musk designs electric vehicles that use renewable energy with embedded artificial intelligence features. The rest, as they say, is history.

Musk is the genius recording success with his diverse innovations geared towards making the world a better place.

However, being an innovator with maintaining relationships seems to be rocket science for the developer of rocket technology. We bring you details about his failed marriages and current relationship.

Musk was first married to Canadian author, Justine Wilson. The estranged couples met and began dating during their studies at Queen’s University in Canada Ontario. They took their relationship to the next level by getting married in 2000.

Their marriage was blessed with six sons. First was Nevada Alexander (born 2002) who died from SIDS (Sudden Infant Death Syndrome) when he was only 10 weeks old.

Musk and Justine were not meant to be together forever as they brought their near decade long marriage to an end in 2008.

Not willing to stay alone, Musk began dating British actress Talulah Riley in 2008. The duo walked down the aisle in 2010 before walking out of the marital union two years later.

Seeming unsure about what they both wanted, Musk and Talulah retied their loose knot in July 2013 but got divorced in December 2014.

They were back together shortly until 2016 when goodbyes had its true meaning in their lives.

Moving on, Musk had a romantic stint with Johnny Depp‘s former wife, actress Amber Heard, between 2016 and 2017.

He is currently having an affair with Canadian musician, Claire Elise Boucher A.K.A Grimes.

The couples who began dating in late 2017 made their first public outing on the 7th of May 2018 at the Met Gala. It is hoped that Grimes has all that it takes to keep Musk happy.

Musk was born into a family of 5. we bring you factual details about members of his family.

Errol Graham Musk is the Dad of the technology entrepreneur.

He is a wealthy National of South African and worked as an electromagnetic engineer. Eroll got separated from Musk Mother when the innovator was only aged 10.

Musk choose to live with his father in South Africa after the separation, a decision which he later admits regretting describing Errol as a terrible human being.

Reasons for Musk’s severed ties with his father borders on the fact that Eroll was tough in raising Musk and his siblings to the point of abuse.

Maye Haldeman is Musk’s mom. She is a model and a successful dietician.

The Canadian National came to South Africa in 1950 and met Musk father during their studies at a high school in Pretoria.

Unlike Eroll, Maye is accommodating to her children including Musk who declined attending a South African college in order to be reunited with his mother in Canada.

Musk has two siblings born of the union between his father and mother. They include his younger brother Kimbal and his younger sister Tosc.

He is now an established businessman who specializes in sourcing food directly from farmers and bringing it to the table of many homes.

Tosca, born on the 20th of July 1974 is an award-winning filmmaker. The beauty who also grew up with Musk has her own Film production studio in Los Angeles. She is currently with kids from her marriage.

Musk has three half-siblings born of his father’s subsequent relationship.

They include Alexandra Musk, Asha Rose Musk and Elliot Rush. Alexandra Musk was born in 1993 of Musk’s father’s subsequent relationship and studied Environmental science at the University of Colorado Boulder.

We know little about Musk’s other half-sibling Asha Rose Musk.

Elliot Rush is Musk’s half brother born of Errol’s ‘shameful affair’ with his half daughter Jana Bezuidenhout.

According to Errol’: “It happened one evening when Jana’s boyfriend threw her out of the house and she had slept over at my house”.

He told Rapport newspaper. “You have to understand – I’ve been single for 20 years and I’m just a man who makes mistakes.”

Moving on to members of Musk’s extended family, his maternal grandfather is Dr Joshua Haldeman – an American-born Canadian.

He has an aunt called Kaye Rive. She is the twin sister of Musk’s mother Maye. Through aunt Kaye Rive, Musk has two cousins; Peter and Lyndon Rive whom he gave total control of his company  SolarCity.

Musk also has a step-mother called Heidi-Mari Musk. She is the biological mother of Asha Rose Musk and Jana Bezuidenhout whom Eroll impregnated.

What makes Musk tick? sit back as we bring you makings of his personality to help you have a complete picture of him.

To begin with, Musk’s persona is a blend of the INTJ (Introversion, Intuition, Thinking, Judgement) traits. He is unemotional, self-driven and self-motivated to achieve his goals against all odds.

As a result, he lives an unbalanced life that is characterized by insane long working hours.

On the bright side, Musk knows how to celebrate success and dedicates part of his allotted 24 hours to reading, listening to music and watching movies.

He also plays video games, bakes cookies every Sunday morning and hangs out with his family and friends.

With an estimated net worth of $22.8 billion, Musk lives the life of a spendthrift billionaire and seemingly has more than he can live with.

For starters, the CEO owns not less than $70 million worth of residential property in the Bel-Air neighbourhood of Los Angeles including a 20,248-square-foot mansion worth $17 million in the neighbourhood.

Besides this are mansions spread across continents and islands of the world. It would only be a matter of time before he creates a paradise for himself on Mars.

Being the leader and sole architect of Tesla Cars, Musk knows and acquire hi-tech cars that stimulate his innovative prowess.

Musk has appeared in several television shows including the Simpsons and Big Bang Theory. In addition, he has produced several films including the 2005 film Thank You for Smoking.

Although he is worth $23 billion, Musk has never taken a paycheck from Tesla. He rather invests billions of dollars of revenue from Tesla into research.

Musk in 2010 had the Gold Space Medal from the Fédération Aéronautique Internationale. The award is the highest honour in the air and space world.

Previous recipients of the award include famous American astronauts Neil Armstrong and John Glenn. The award is deserving of Musk who is working towards creating a human colony on Mars.

He is one among numerous tech billionaires that have signed the Giving Pledge. By signing the pledge, Musk promises to donate the majority of his wealth to philanthropic efforts.

Notable tech entrepreneurs that have also signed the pledge include Bill Gates, Mark Zuckerberg, among others.

The latest of his innovative idea is yet to come through. The Hyperloop is the name. This is a new form of transportation that could theoretically send people from San Francisco to Los Angeles in half an hour by way of pressurized tubes.

FACT CHECK: Thanks for reading our Elon Musk Childhood Story plus untold biography facts. At childhood biography, we strive for accuracy and fairness. If you see something that doesn’t look right in this article, please place your comment or contact us!