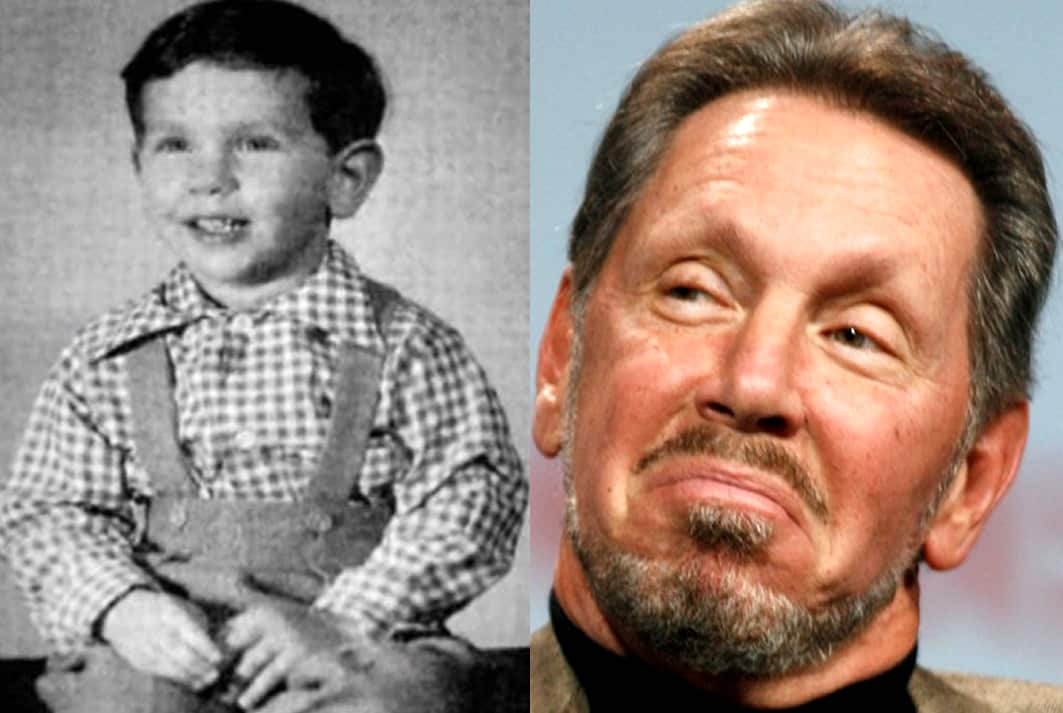 Childhood Biography presents the Full Story of an American Billionaire with the nickname “The Shark”.

Our Larry Ellison Childhood Story plus Untold Biography Facts brings you a full account of notable events from his childhood time to date.

Yes, everyone knows he is one of Silicon Valley’s most admired businessmen. However, only a few consider Larry Ellison’s Biography, which is quite interesting. Now, without further ado, let’s begin.

For starters of his Biography, Larry Ellison was born in New York City, USA on the 17th of August 1944. He was born to his mother, Florence Spellman, and to a father who served as a Pilot in the United States military.

The American national of mixed ethnicity with Italian and Jewish roots was only nine months old when he contracted pneumonia.

The development led Larry’s single mother to seek better upbringing opportunities for him. Thus, she offered Larry to her aunt Linda and uncle Louis for adoption.

Larry was raised at Chicago’s South Shorewood by Linda and Louis. Growing up at the town Larry shared a close bond with his accommodating foster mother.

On the other hand, his foster father Louis was exacting, strict, and stubborn. Notwithstanding, Larry lived above Louis’ misdemeanor and grew up exhibiting traits of independence and self-assuredness.

Research has it that Larry’s education background includes his studies at Eugene Field Elementary School in Chicago before progressing to Sullivan High School.

While at the respective schools, Larry was an intelligent kid who had interests in complicated high-tech engineering subjects.

Subsequent academic pursuits saw Larry get enrolled at the University of Illinois but soon dropped out upon hearing the news of his foster mother’s death.

Moving on, he got enrolled at the University of Chicago, where he spent just one-semester studying maths and physics but soon lost interest in education and dropped out.

Larry moved to Berkeley, California, where he lived close to the margin of Poverty. Nonetheless, he soon developed an interest in computers and programming and trained himself to be a tech geek.

Not long after, he landed his first Job as a programmer at Amdhal corporation where he put his acquired knowledge into good use by working on the first IBM-compatible mainframe system.

After having a stint with Amdhal, Larry began working for Ampex Corporation, where he helped develop a database called Oracle for the CIA.

While Larry was at it, he read a paper written by Edgar F. Codd on relational database systems called “A Relational Model of Data for Large Shared Data Banks”.

Inspired by the paper Larry Co-founded a database company under the name ‘Software Development Laboratories (SDL)’ in 1977. His partners were Bob Miner and Ed Oates who both worked with him at Ampex Corporation.

There was no end in sight to what Larry and his partner could achieve with their new company. In the early ‘80, the company was renamed ‘Relational Software Inc’ and went on to become ‘Oracle Systems Corporation’.

Although Oracle Systems Corporation faced bankruptcy at some point in its history, the company made a fierce comeback that saw it become the leader in the database-management realm. The rest, as they say, is history.

The Love Life of Larry Ellison:

Larry Ellison has been married and divorced 4 times we bring you details about his dating history, failed marriages and current relationship status.

Starting off, there’s not much known about the women he dated before getting married to his first wife Adda Quinn in 1967. Larry’s marriage with Adda lasted for only 7 years before they got divorced in 1974.

Moving on he got married to Nancy Wheeler Jenkins in 1977, a union which lasted for just one year before they got separated in 1978.

Not willing to rush into another marriage, Larry waited for five years before getting married to his next wife Barbara Boothe, in 1983.

The last of Larry’s marital life was his marriage to romance novelist, Melanie Craft in 2003. The duo stayed married for 7 years before getting divorced in 2010.

Larry has seemingly made up his mind to remain single for the rest of his life and has been dating model Nikita Kahn ever since his last divorce.

Larry has a bit of complicated family origin and history. We bring you factual details about members of his family.

Larry’s biological father is of Italian descent and served as a Pilot in the United States military.

He was neither married to Larry’s mother nor had dealings with Larry’s early life. The only father figure in Larry’s life was his uncle turned foster father, Louis Ellison.

Louis was a Russian who entered the United States via Ellis Island. As a result, he named himself Ellison after the Island and went to work as a government employee in Chicago.

Ellison made a fortune in real estate before losing it to the great depression. He has a severed father-son relationship with Larry who considers him to be unsupportive, austere and often distant.

Shortly after handing Larry up for adoption she disappeared from his life and only had the chance to meet him when he was 48.

The only mother figure in Larry’s childhood was his foster mom, Lillian Spellman. Lilian raised Larry like he were her child.

As a result, her death dealt a huge blow to Larry leading to his dropping out of the University of Illinois.

Larry is yet to talk about his brothers and sisters. In the same light, he has not said anything about his grandparents, cousins, nieces and nephews.

What makes Larry tick? sit back as we bring you makings of Larry’s personality to help you get a complete picture of him.

To begin with, Larry’s persona is a blend of the ESTP (extraversion, sensing, thinking, perception) traits. He is adaptable, lives in the real world and has the extroverted energy to get things done.

With an estimated net worth of 63.6 billion USD, Larry lives the life of billionaires. He is arguably the most flamboyant and outspoken of billionaires and matches his status with well-tailored Italian suits.

What’s more? he has a $110 million worth of estate that was styled after feudal Japanese architecture and has mansions spread over the world. Larry even owns 98% of Lanai, Hawaii’s sixth-largest island. 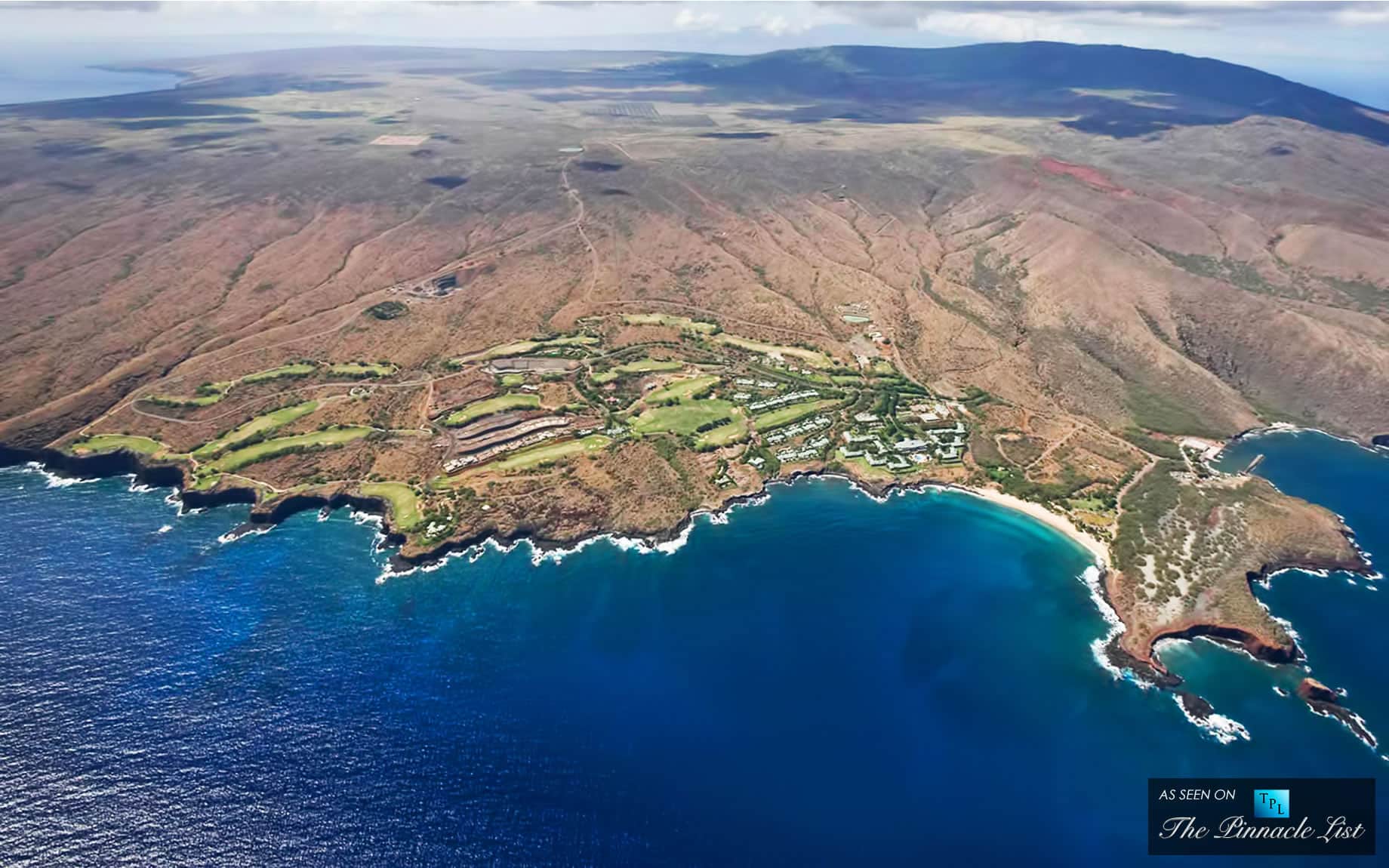 Larry unsurprisingly has exotic cars, including a McLaren F1, an Audi R8, a Lexus LFA and a Lexus LS(XF40). Being a registered pilot, he shows the strength of billions by flying around in his private military jets and a decommissioned MiG-29.

Ellison was raised Reform Jewish but remains a religious sceptic. He even refused to have a ‘bar mitzvah’ celebration when he was aged thirteen. Nonetheless, he is a bit religious but does not subscribe to dogmas.

Larry made a cameo appearance in Iron Man 2 (2010). He is glimpsed briefly at the Stark Expo, when Stark says, ‘It’s the Oracle of Oracle.’

Ellison is a passionate sailor who owns yachts worth hundreds of million dollars. He is actively involved in yacht races and in 2013 led his Oracle Team USA to win America’s Cup. 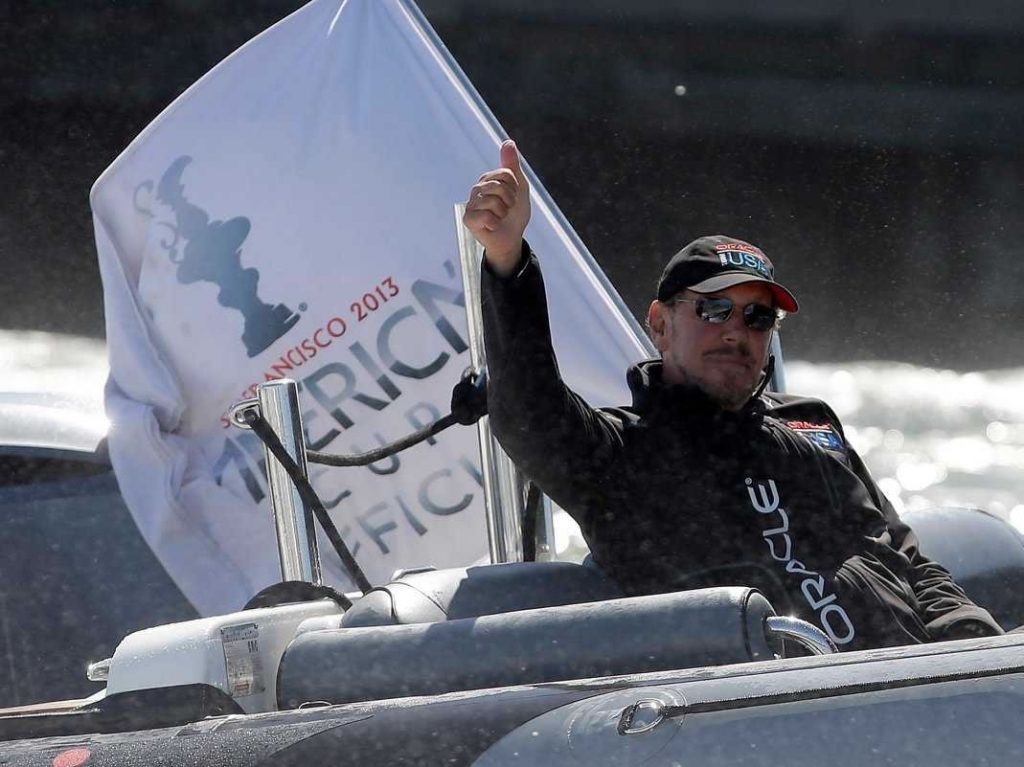 Ellison was in 1997 made the director of Apple Computers. Larry, however, resigned in September 2002 citing a lack of quality time for board meetings.

FACT CHECK: Thanks for reading our Larry Ellison Childhood Story plus untold biography facts. At childhood biography, we strive for accuracy and fairness. If you see something that doesn’t look right in this article, please place your comment or contact us!