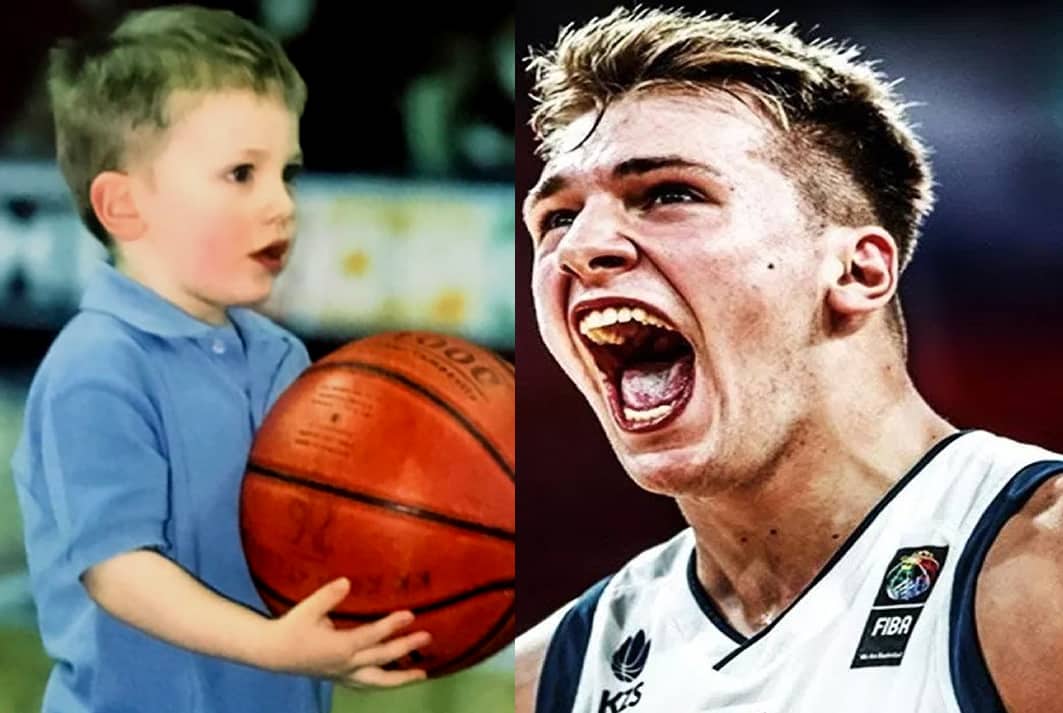 Childhood Biography presents the Full Story of an NBA Superstar with the nickname “El Niño Maravilla“.

Our version of Luka Doncic’s Biography, including his Childhood Story, brings you a full account of notable events from his boyhood days. We then proceed to tell you how the NBA star became famous in the game.

To whet your autobiography appetite, we portray you his early life and rise gallery. This tells you Luka Doncic’s Life – from the very beginning..

The analysis of Luka Doncic Bio involves his early life, family background. Luka’s life story before fame, and rise to fame story. More so, Doncic’s dating history, personal life, family facts, and lifestyle. Plus other little-known facts about him.

Yes, everyone knows of his flashy ball-handling and patented step-back threes. However, only a few consider Luka Doncic’s biography, which is quite interesting. Now, without further ado, let’s begin.

For Biography starters, Basketball genius Luka Dončić was born on the 28th day of February 1999. His birthplace is in the city of Ljubljana, Slovenia.

He was born of the union between his father Saša Dončić (a former basketball player turned coach) and mother Mirjam Poterbin (owner of beauty salons). Meet Luka Doncic’s Parents.

The Slovenian national of white ethnicity with Serbian family origins was raised in a middle-class family background setting at Ljubljana – the largest and capital city of Slovenia – where he grew up without biological siblings.

Growing up at Ljubljana, baby Dončić was only 7 months old when he first held a basketball, to the delights of his father.

By the time Dončić was aged one, he began playing with a miniature hoop in his room. At that time, he went on to explore other sports, including football.

Although Dončić enjoyed a variety of childhood sports, the thrilling sensation he got from his basketball engagements was second to none.

As a result, he realized from a very young age that he was made for the sport and took it seriously by playing organized basketball at primary school.

“In primary school, I always trained and played with kids who were much older and had more experience than me. Most of them were much bigger and faster so I had to devise means of beating them with brainy techniques.”

Recalled Dončić of his career buildup.

While Dončić was at it, he had a number of influential names in the sport. He had names like Vassilis Spanoulis & LeBron James as his childhood idols. He also incorporated part of their techniques in his career buildup.

When Dončić was aged 8, he was invited to begin his youth career. The venue was at club Union Olimpija in Ljubljana.

The invitation was not surprising to the basketball prodigy. This is because it came just a few days after his father began playing for the hometown club.

It was at club Union Olimpija that an 8-year-old Dončić was moved up to the 11-year-old group after a 16-minute trial because he exhibited a class that was deemed too superior for 8-year-olds. 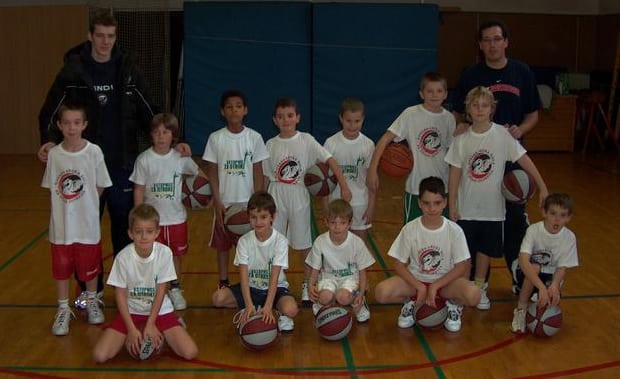 Thus began the youngster’s accelerated rise through the ranks as he was made to practice with Olimpija’s under-14 team in the next season.

At the peak of Dončić’s early career at Olimpija, he joined Spanish club Real Madrid. He joined on loan in 2012. And then lead the team to finish second in the Minicopa Endesa under-14 Spanish club competition.

What more? he won the tournament MVP honour. That made him become a prospect whose signature was highly craved by Real Madrid. 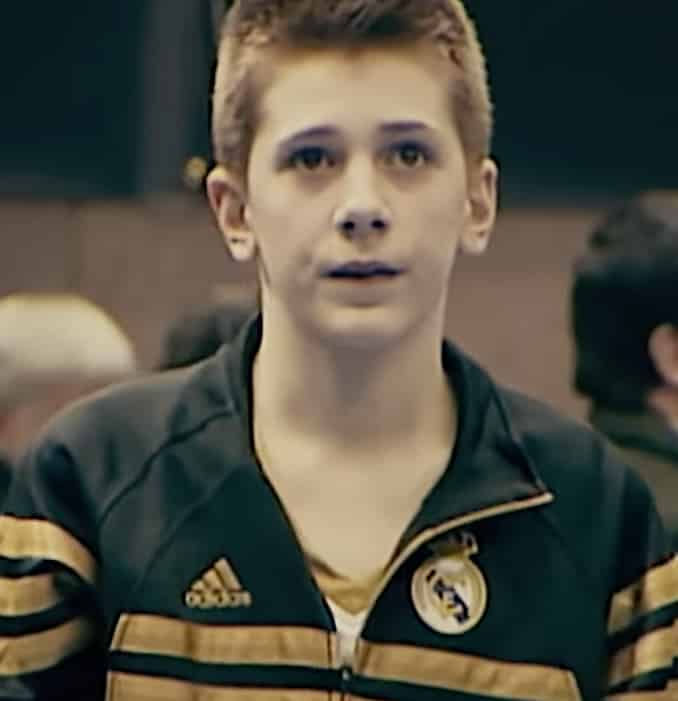 When Real Madrid eventually signed Dončić in September 2012, he was only 13 years old with little knowledge of Spanish.

Notwithstanding, he was ready to brace the challenges that lay ahead including making the journey from Slovenia to Spain by himself.

It is worthwhile to note that Dončić fared considerably well during his early years at Real Madrid and recorded a meteoric rise through the ranks, such that he was a dominating rising star in the world of European basketball with numerous MVP awards. 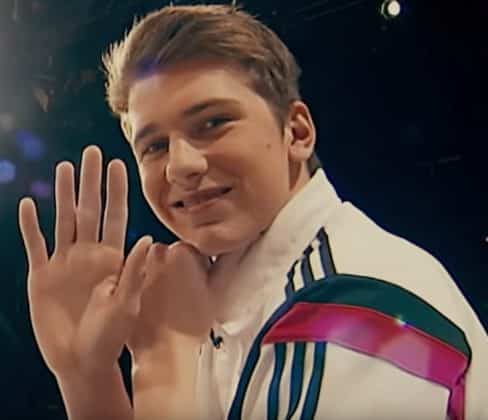 At the end of the 2017-18 season, Dončić had earned the prestige of becoming on the best prospects in the world as well as the frontrunner to go first in the 2018 NBA Draft.

However, he started to fall down draft boards during the draft process. In fact, Dončić dropped down to a position that NBA teams become sceptical about his athleticism, as the boards didn’t speak well of him. 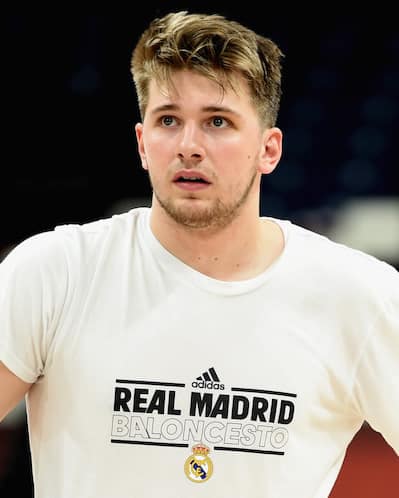 On draft night, Dončić was selected with the third overall pick by the Atlanta Hawks in the 2018 NBA draft. However, he was traded to the Dallas Mavericks in a draft rights exchange deal.

Although Dončić signed his rookie contract with the Mavericks on the 9th of July 2018, he wasn’t used at the 2018 NBA Summer League over a late buyout from Real Madrid.

NBA fans clamouring to see Dončić play finally had their heart desires fulfilled when he made his regular-season debut on the 17th of October 2018. 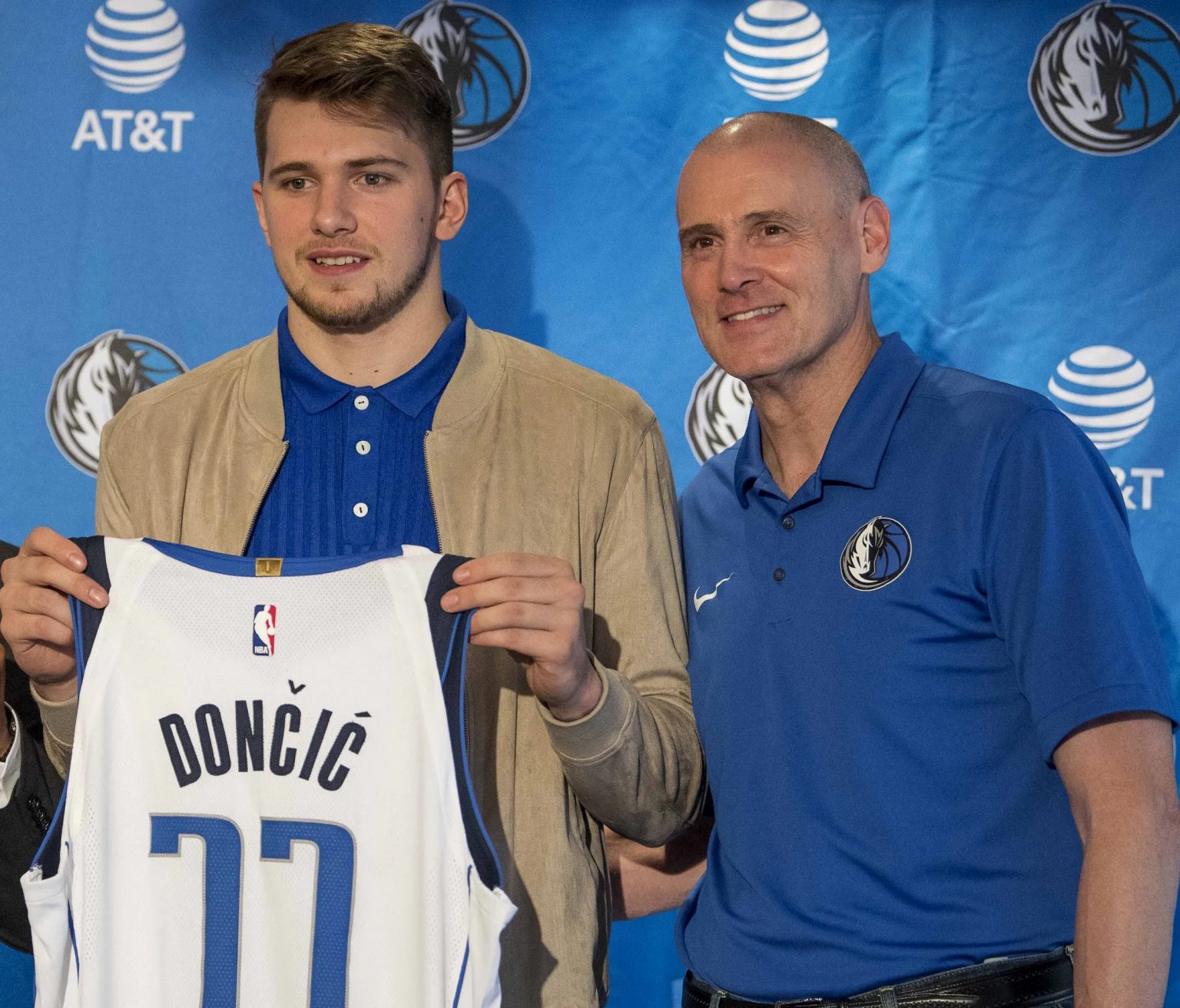 It didn’t take long before Dončić impressed viewers and opponents alike with his amazing craft which saw him won Rookie of the Year for the 2018–19 season.

Fast forward to the time of writing Dončić is still a new kid in the NBA block, nonetheless, he is dominating the premier men’s professional basketball league with enthusiasm and authenticity like Stephen Curry during his early days in the league. The rest, as they say, is history. 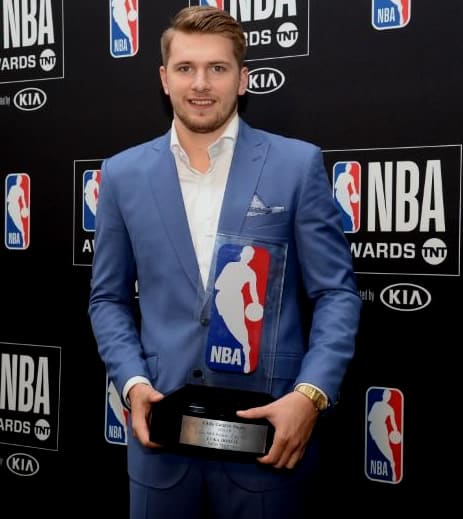 Away from Luka Dončić illustrious career, he has an amazing love life that has been of great interest to online tabloids.

Whenever the tabloids run out of exciting content about his court performances, they fall back on his booming relationship with his long-time girlfriend – Anamaria Goltes.

Goltes and Dončić have always known each other since they were teenagers but little is known about when they became romantically involved. 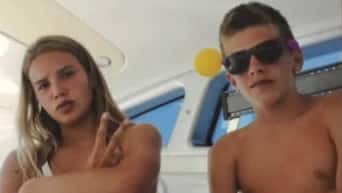 Though The lovebirds went separate ways in early 2018, they got back together in July 2018 and have been exhibiting couples goals ever since.

It wouldn’t be long before super girlfriend Goltes and Dončić get engaged as they look just perfect to bear son(s) and daughter(s). 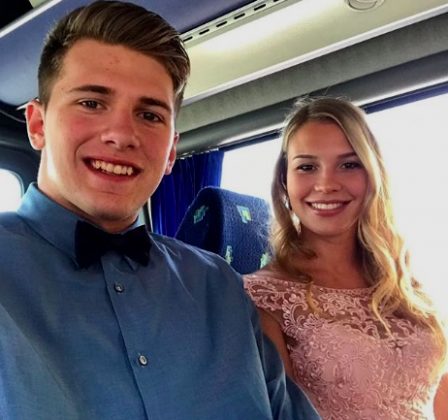 Having a lovely girlfriend and Family is so important to Luka Dončić. It means everything to the professional basketball player. 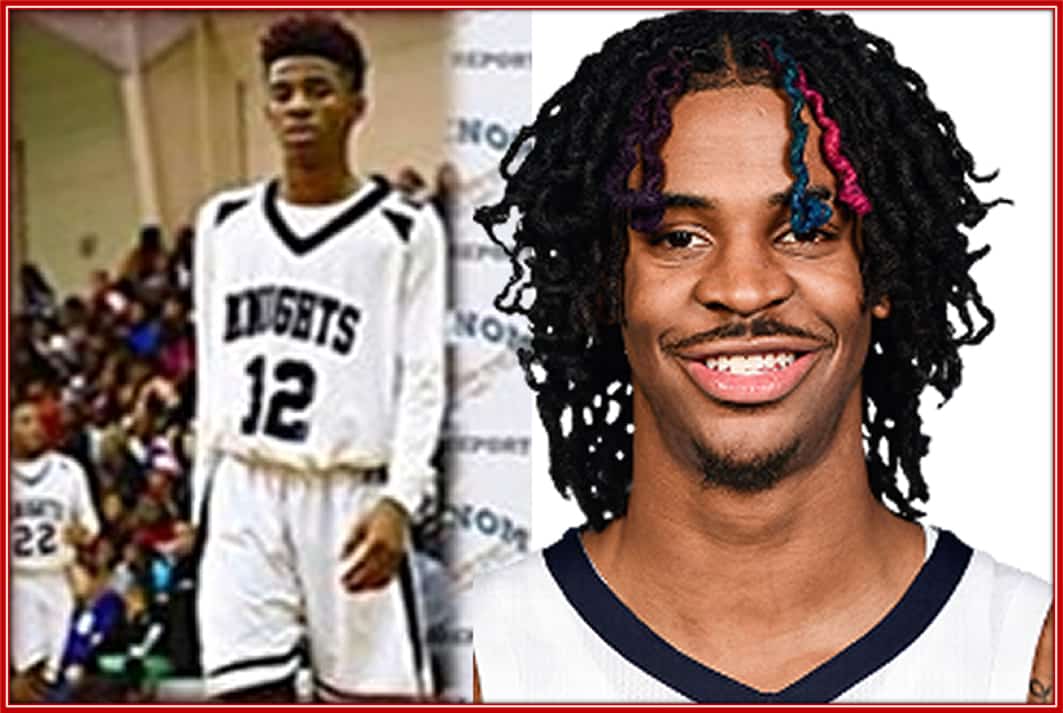 In this section, we bring you facts about Dončić’s family members beginning with his parents.

Saša Dončić is the basketball players’ loving and supportive dad. He was a basketball player for the better part of Dončić’s early life and has been coaching from 2010 to the time of writing this bio. Saša – who is of Serbian family roots – got separated from his wife (Dončić’s mom) in 2008.

Nonetheless, he remained close to his son and constantly reminds him that “being a good son means being Luka Doncic”. 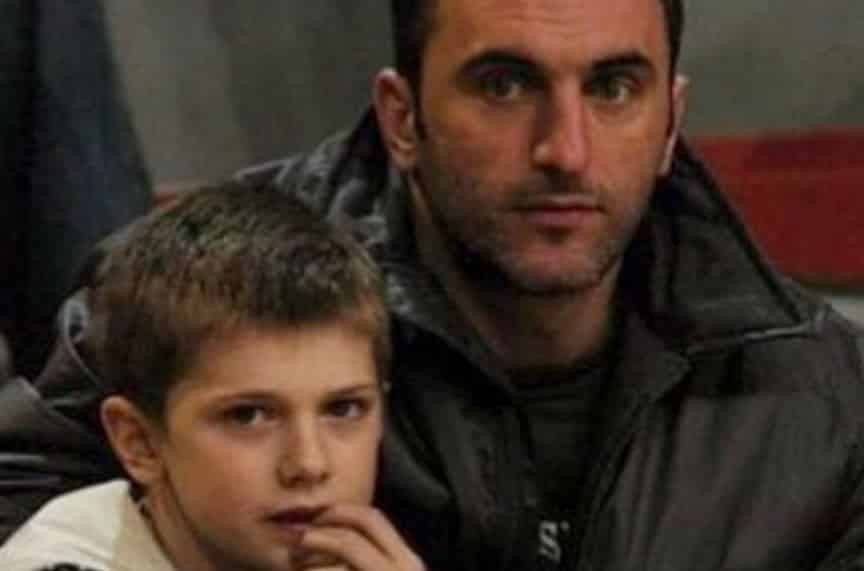 Mirjam Poterbin is Dončićs loving mom. She was a former hurdler, dancer and model who Operates a Beauty Shop at the time of writing this biography.

The supportive mother – who was with Dončićs for every step he took towards the NBA – admits that allowing him to move to Real Madrid at the tender age of 13 was one of the toughest decisions that she had to make.

It wasn’t until his late teens that she moved to Madrid and began living with Dončić in a gated community. 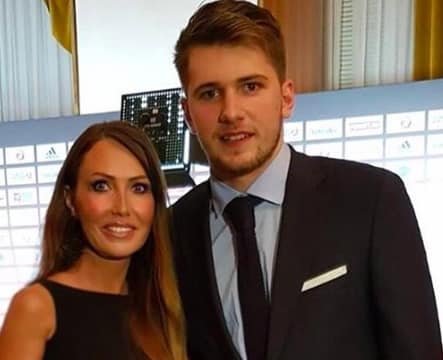 Dončić could be the only child born to his parents because they got separated when he was aged 8 while there are no available records of siblings cheering him on to victory during games.

More so, Doncic only lived with his mother in Madrid and he does not talk about spending a good time with a brother or sister during holidays. 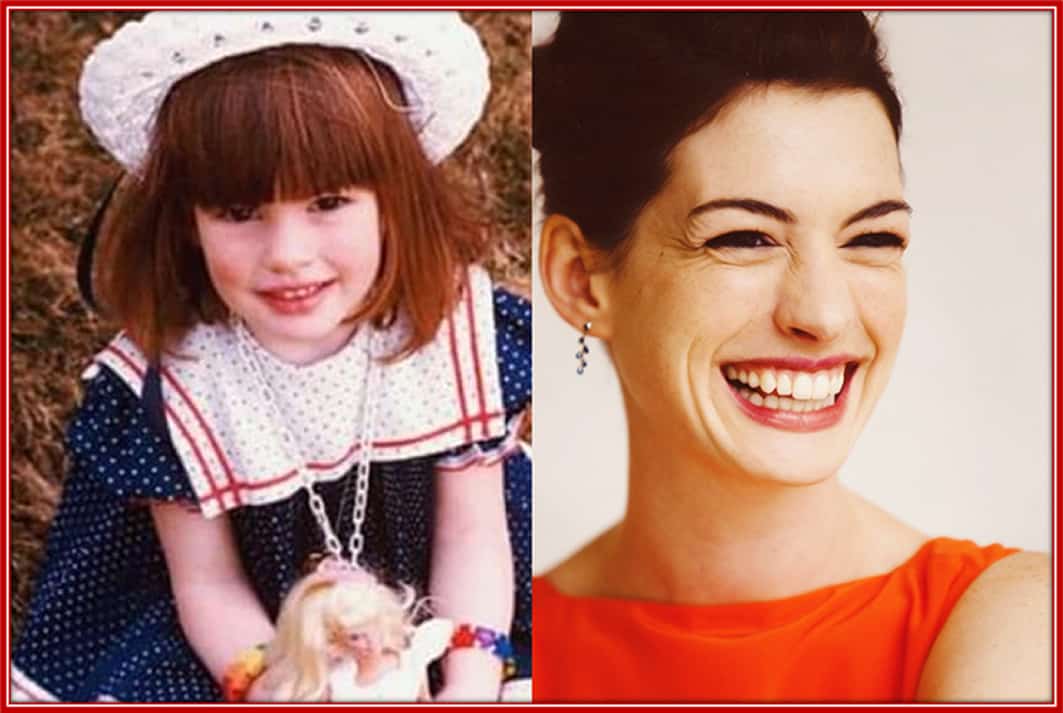 Moving on to Dončić’s extended family life, not much is known about his ancestry particularly his paternal grandparents as well as maternal grandfather and grandmother.

Similarly, there are no records of  Dončić’s uncles, aunts and cousins while his nephews and nieces are yet to be identified at the time of writing this biography.

Personal Life away from Basketball:

Luka Dončić possesses a likeable personality that has makings of Pisces Zodiac sign traits. He is unique, likeable, respectful, action-focused, fun to be with, uncompromising and sometimes quirky.

Added to Dončić’s impressive persona is his natural disposition to not revealing much about his personal and private life.

Activities that the basketball player regard as his interests and hobbies include playing video games, boxing, watching movies, playing football and spending a good time with his friends and family. 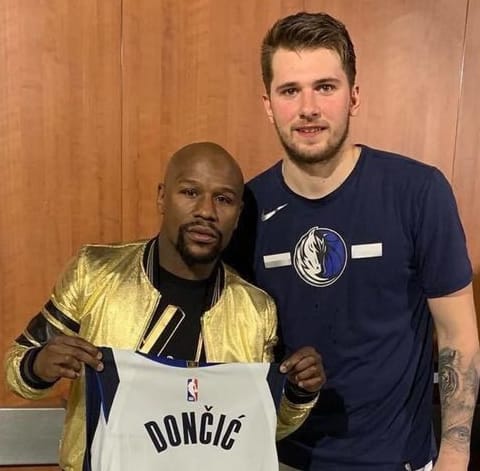 Regarding how Luka Dončić makes and spends money, his net worth is still under review at the time of writing owing to the fact he has just a year of experience in the NBA.

Notwithstanding, he is believed to be racking up significant earnings in salary. Also in wages and endorsement.

The basketball player is not yet big on flaunting his rising wealth, thus, not much is known about the value of the house or apartment that he resides in nor the cars that he rides.

However, he is known to possess an Audi car which was gifted to Real Madrid basketball players by the automobile manufacturer.

To wrap up our Luka Dončić childhood story and biography here are lesser or little known facts about him.

Do you know that Dončić’s Spanish nickname “El Niño Maravilla” translates as “Wonder Boy” in English? He was given the nickname during his early days at Real Madrid. That was where he dominated ranks and won numerous MVP awards.

Luka Dončić has a number of tattoos or body arts to beautify his height of 6′ 7″. The tattoos include the Latin phrase “non-desistas, non-exieris”.

It translates as “never give up, never surrender” in English, his jersey number 7 at Real Madrid as well as the image of a tiger on his left forearm.

Dončić also acquired a tattoo of the EuroBasket 2017 cup on his right hip. It came after he helped Slovenia win the competition. 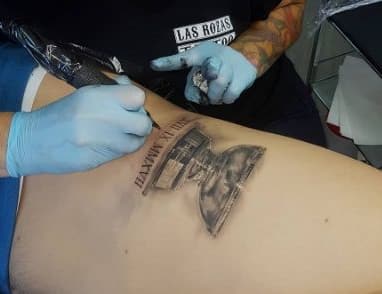 Dončić doesn’t have a history of smoking. Neither is he given to drinking at the time of writing. He rather strives to be in good health and frowns upon anything capable of limiting his performance.

Dončić has a thing for pets especially the dogs. He has a dog named Hugo at the time of writing. Hugo is a neat dog of Pomeranian breed.

The dog lives in the same house with Dončić and doubles as the basketball player’s friend. 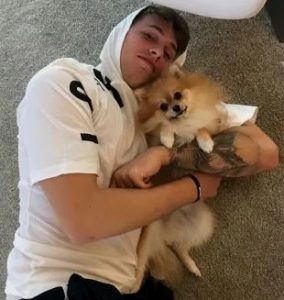 Dončić is not religious and he is yet to give clues about his beliefs at the writing. In addition, he has not made statements or moves that give him away as a non-believer.

Thus his position of matters of faith lies somewhere between privacy and focus on focus on basketball.

FACT CHECK: Thanks for reading our Luka Doncic Childhood Story plus untold biography facts. At childhood biography, we strive for accuracy and fairness. If you see something that doesn’t look right in this article, please place your comment or contact us!