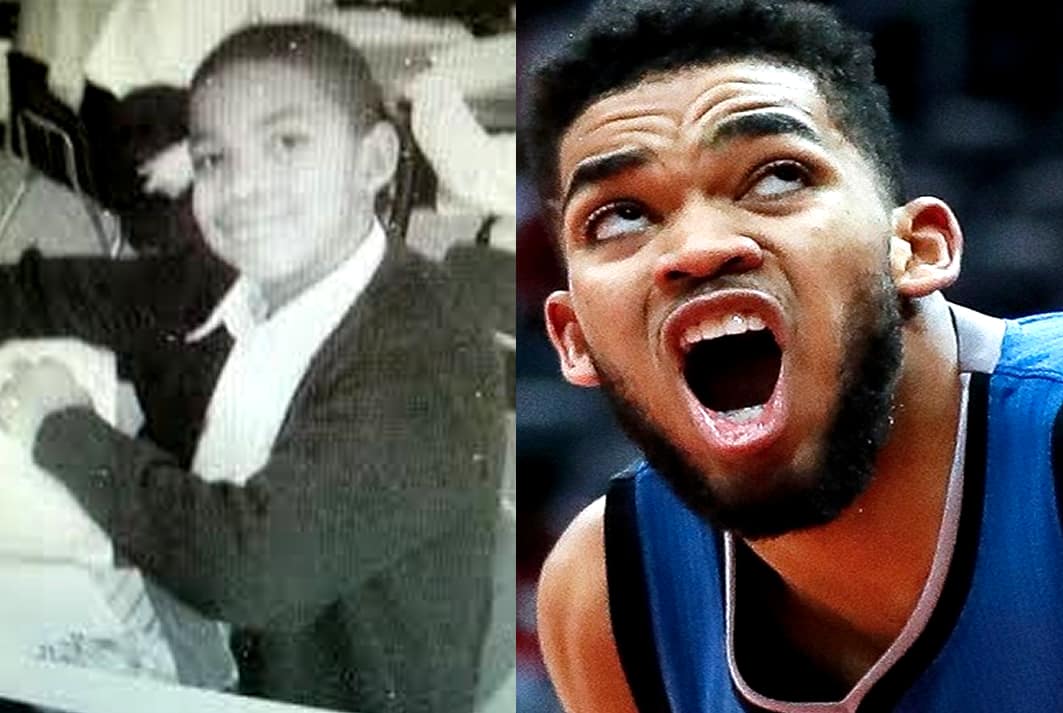 We give you full coverage of Karl-Anthony Towns’ Biography, Family Facts, Parents, and Early Life. We begin by telling you notable events right from his boyhood years, right until when he became famous in basketball.

Yes, everyone knows of his exceptional basketball skills, which earned him the NBA Rookie of the Year in 2016.

However, only a few consider Karl-Anthony Towns’ biography, which is quite interesting. Now, without further ado, let’s begin.

For Biography starters, Karl-Anthony Towns was born on the 15th day of November 1995 to his mother, Jacqueline Cruz a Dominican, and his father, Karl Towns Sr. an African-American in Edison, New Jersey.

He is the second of three children born of the union between his mother, Jacqueline Cruz, and his father, Karl Towns Sr. Behold, Karl-Anthony Towns’ parents – the people that gave him life.

The American national with Dominican-American ethnicity was born into a middle-class family background. His family origin has traces of both African and Dominican roots.

Growing up in Piscataway, Towns was fascinated with the game of basketball as he watched his father coach a basketball team.

His love for basketball was enormous, as he always pondered about the magic behind how players could jump so high in the air with a ball.

Towns knew that the answers to his questions could only be achieved if he ventures into the game thus began the genesis of his basketball expeditions.

Going to school was mandatory, according to family tradition. Karl-Anthony Towns’ parents enrolled him to study at different schools right from his childhood. First, he attended Lake Nelson Seventh-day Adventist School, after which he was enrolled to study at Our Lady of Fatima School.

He later transferred to Theodore Schor Middle School, where he repeated a seventh grade in order to improve on his academic performance.

While in his fifth grade, Towns always joined the basketball training of the Technical High School where his father coached basketball.

He led the basketball team to a state championship where he earned the top position in the ESPN 25 national ranking of High School players in 2012.

The joy of Karl-Anthony Towns’ family knew no bound at the time he achieved this feat.

Towns’ achievement in the game of basketball in 2012 was quite outstanding. He also led his High School basketball team to state titles in the year 2013 and 2014.

The performance of Towns became the beacon that announced his exceptional capabilities in the game.

Prior to his outstanding gameplay in High School, Towns was selected to play for his motherland thereby representing the Dominican Republic basketball team in the 2011 and 2012 international basketball competition at the age of 16.

After graduating from High School with a CGPA of 3.96 on a 4.5 scale, Towns enrolled to study Kinesiology at Kentucky college.

Towns was selected by the Minnesota Timberwolves on the 25th day of June 2015 with the first overall pick in the 2015 NBA draft.

His performance for the first thirteen games with Minnesota Timberwolves was mind-blowing, averaging 16.0 points and 10.4 rebounds per game.

However, Towns’ performance after his first thirteen games dropped drastically averaging 8.4 points and 6.0 rebounds per game in his next five games.

Although Towns’ performance was poor, he concentrated more efforts in training hard to improve on his skills so as to avoid becoming a disappointment to his teammates as well as his fans.

In 2015-16, Towns played and started in all 82 games for the Timberwolves with an average performance of 18.3 points and 10.5 rebounds per game earning him the NBA rookie of the year honours.

He also earned the Western Conference Rookie of the Month honours for six months and became the fifth unanimous NBA Rookie of the year.

By the time Towns was 21 years old, he became the third-youngest player to have at least 45 points and 15 rebounds in a game in the last three decades.

Fast forward to the time of writing, Karl-Anthony Towns is an excellent NBA superstar and has signed a $190 million super-maximum extension with the Minnesota Timberwolves team in September 2018.

Owing to the exceptional performance of the Timberwolves centre player, Towns has been selected twice for the All-Star game in 2018 and 2019 respectively.

Without a doubt, he is one of the US most liked NBA Stars alongside Kawhi Leonard, Luka Doncic, Giannis Antekokoumpo, Joel Embiid, James Harden etc. The rest, as they say, is history.

Moving on Karl-Anthony Towns relationship status, he is single at the time of writing. The young talented NBA basketball star has been in a romantic relationship with Kawahine Andrade until their fall-out in the month of May 2018.

Reason for his break-up: Karl-Anthony Towns girlfriend was reportedly rumoured to have hooked up with his teammate, Jimmy Butler.

Thorough research was carried out to ascertain the veracity of the rumours, and some evidence discovered proved that Towns’ girlfriend had cheated on him by sleeping with Jimmy in May 2018.

Although Towns’ comments on the entire issue were ambiguous, he stopped posting his girlfriend’s picture at about the same period of the incident.

One of the factors that can contribute to the achievements of a child’s vision is his family. Karl-Anthony Towns comes from a middle-class family background.

In this session, we bring you facts about his family life beginning with Karl-Anthony Towns’ parents.

About Karl-Anthony Towns’ father: Karl Towns Sr. is Towns’ dad. Towns’ dad was also a basketball player and became the first person that engineered the passion for basketball in the life of his son.

Karl Towns Sr. played basketball for Monmouth University and also served as a basketball coach at Piscataway Technical High School when Towns was still in his fifth grade.

About Karl-Anthony Towns’ mother: Jacqueline Cruz is Towns’ mom. Cruz has always supported her child in all aspects of his life’s career. She always encouraged him to put in all his efforts in becoming an excellent basketball player.

Her words and acts of encouragement were part of the motivations that gave Towns the mindset of never giving up as he realized that just like his mother, there are also many people who are watching out for his success.

Regarding his ancestry, there has been no information about his maternal grandfather and grandmother as well as his paternal grandparents.

Furthermore, little information is known about Towns’ uncles and aunts as well as his nephews and nieces.

What makes Karl-Anthony Towns? In order to give you satisfying details about the bio of Towns, we bring you makings of his personality outside the world of the NBA. Karl-Anthony Towns’ Personal Life is a blend of Scorpio Zodiac traits.

Karl-Anthony Towns Interest and Hobbies: Towns have disclosed that his interests are not only restricted to basketball. He mentioned in one of his interviews that he has a lot of hobbies in different fields outside basketball.

He said “I love to golf. I love to play baseball. I love to just be myself”. This makes his life outside the basketball pitch even more fascinating. 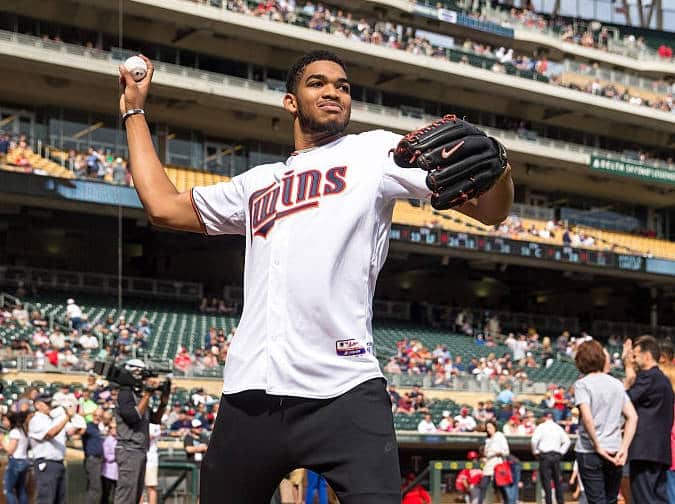 Towns has an estimated net worth of $15 million at the time of writing. Owing to his recent contract of $190 million with Timberwolves, his net worth would possibly Skyrock to a higher amount in the future to come.

The source of his wealth stems mainly from his basketball endeavours and endorsement deals with brands like Nike, Gatorade and 2K sports to mention a few. Analysis of his spending patterns shows that he lives a luxurious lifestyle.

At the starting point of his basketball career at Minnesota Timberwolves, Towns had no ride and would often walk to the pitch in the freezing temperature of the environment.

The Timberwolves centre later purchased a luxurious house worth $4.52 million at West Metro in 2018.

The house covers a landmass of 17,251 square-foot and comprises five bedrooms. Also, nine bathrooms, indoor and outdoor pools, golf hole. A tennis court with a tea house, a hot tub and other amenities.

He also owns some luxurious and quite expensive cars namely; Volvo S60 and Range Rover.

To wrap up our Karl-Anthony Towns childhood story and biography, here are more facts. Known facts about him that will help you grasp a complete picture of his bio.

Karl-Anthony Towns’ parents raised him to be a devout Christian. During his training days with his father, Towns had a rigorous basketball routine. One that made him attain 1000 jump shots six days per week, excluding only Sunday for Church service.

Towns has not inked any form of tattoo on his body at the time of writing this bio. He has no interest in inking tattoos on his body.

He was once told in an interview that he has a prospect of winning an NBA title. And that demands that he would get the Louisville Cardinal tattooed on his head. This was Towns reply;

“I would do anything I need to do. to get a title.

but I know after the title’s in my hand, I’m probably going to get the tattoo lasered off”.