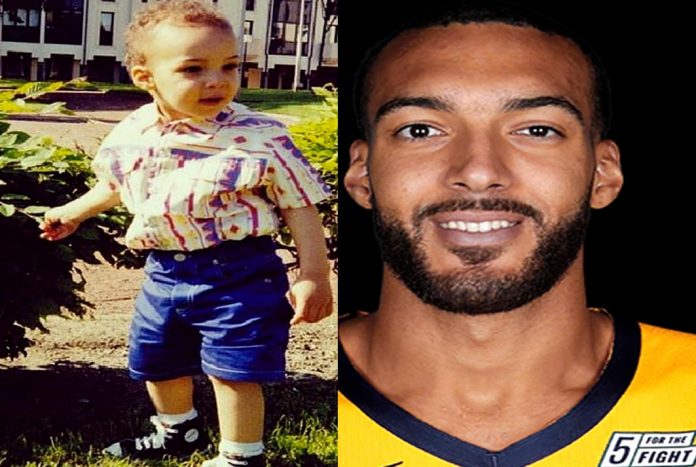 More so, Rudy’s Early Life, Lifestyle, Girlfriend, Personal Life, and other notable Biography Facts right from when he was a child to when he became popular.

Yes, everyone knows he is the first NBA player to be diagnosed with coronavirus, also known as Covid-19.

However, only a few consider Rudy Gobert’s Biography, which is quite interesting. Now, without further ado, let’s begin.

For Biography starters, Rudy Gobert-Bourgarel was born on the 26th day of June 1992 at the commune of Saint-Quentin in France.

He is the only child born of the union between his mother, Corinne Gobert, and his father, Rudy Bourgarel.

Thanks to being born to biracial parents in France, Rudy is a French national of mixed ethnicity with African family roots.

Did you know that he grew up at his birth commune in Saint-Quentin, which is north of Paris?

Growing up at Saint-Quentin, Rudy was only three only years when his parents went separate ways.

One of Rudy’s early life interests was playing basketball, a sport which his dad did play at a professional level. Thus, Bourgarel had more reasons to be very close to his son with a view to mentoring him in basketball.

On her part, Rudy’s mom Corinne was a hairdresser for the entirety of his childhood. As a single mom, she did work hard to cater for Rudy’s basic needs as well as those of his brother and sister (born to a different dad).

By the time Rudy was 11 years of age, he had begun his career buildup in basketball at JSC St-Quentin club. It was at the boyhood club that he took his first steps in competitive basketball.

While Rudy was at it, he did dare to dream of how far the sport would take him but nonetheless, paid equal attention to his academic education, which he knew might bring about high school engagements in basketball and a college career in the sport.

Fortunate for Rudy, he didn’t have to go through the hassles of high school basketball engagements and a college career because he spent much time playing for Saint-Quentin BB club in 2007 before earning a place at Cholet Basket youth academy in 2010.

His early achievements with the cadet’s categories of Cholet Basket include being one of the academy’s products to play with the French under-18 national team at the FIBA Europe Under-18 Championship.

What more? The competition saw him emerge as the French Team’s best scorer and rebounder.

The turning point of Rudy’s career in basketball came when he chose to declare for the NBA draft in 2013.

He was 7-foot-1 inches at the time and had both the track record & skillset to make him strike NBA teams as a good select.

As a result, it wasn’t surprising that The Denver Nuggets did select 21-year-old Rudy with the 27th overall pick but gave him out to the Utah Jazz in a trade deal on the night of the draft. 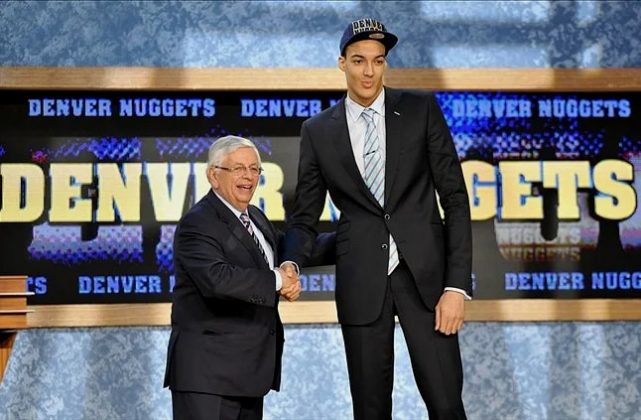 Upon signing his rookie contract with Utah Jazz, Rudy was made to begin playing in the 2013 NBA Summer League.

He did well to impress by scoring a season-high 10 points against the Oklahoma City Thunder in just his 12th game for the Jazz.

Fast forward to the time of writing Rudy Gobert’s Biography, Rudy has – among other achievements, – done well to have won the NBA Defensive Player of the Year awards back-to-back in 2018 and 2019.

Making an All-NBA Team list in 2017 and 2019 is another feat that would no doubt makes Rudy Gobert family members, even more, prouder about the very own.

Little did they know that another form of popularity was coming for Rudy on the negative side of things.

On the fearful side of things, the defensive basketballer got global attention after he tested positive for coronavirus also known as Covid-19. This development made the NBA suspend the 2019–20 season indefinitely.

Fans and the rest of the world join him in thoughts and prayers as they hope that he recovers soon. The rest, as they say, is history.

Who is Rudy Gobert’s Girlfriend?

Tall, broad and handsome Rudy Gobert should be on the wish list of every woman that has set eyes on him (except his mother and sister).

However, the basketball genius is yet to be seen with a lady that can be called his girlfriend.

In addition, Rudy does not have a wife nor Son(s) and daughter(s) out of wedlock.

For all we know, Rudy is single at the time of writing for reasons not far from consolidating on his previous achievements in basketball as he looks forward to achieving more.

When it comes to basketball, family is not just important to professional players of the sport. It is everything to them. In this section, we’ll bring you facts about Rudy Gobert’s family members starting with his parents.

Rudy’s dad – Rudy Bourgarel is a one-time professional basketball player who was born in Guadeloupe, France.

He has had a number of career successes that include making appearances for the French national team in the 1980s.

However, he did fail to realize his dreams of playing in the NBA. As a result, Bourgarel strove to ensure that his son made it to the famous men’s professional basketball league by mentoring and supporting him all the way.

Rudy’s mom – Corinne Gobert is arguably the closest person to his heart. It was Corinne who the basketball genius stuck with following his parents split and she is known to have always been present at his significant life events even on the night of the NBA draft.

Speaking of her family origins, Corinne is a white woman with French roots, a development that explains why Rudy is biracial.

About Rudy Gobert’s Siblings and Relatives:

Moving away from facts on Rudy Gobert parents, the basketball Genuis did once reveal that he has brothers and sisters born to a different father. Not much is known about the half-siblings and his step-dad.

Neither are their records of Rudy’s ancestry particularly as it relates to his maternal and paternal grandparents.

Similarly, at the time of writing Rudy Gobert’s biography, his aunts, uncles, cousins, nephews and nieces are yet unknown.

What makes Rudy Gobert tick and of what nature is his character and engagements outside basketball courts? sit back as we bring you facts about the makings of Gobert’s persona which is similar to those of individuals whose zodiac sign is Cancer.

He is humble, playful, emotionally intelligent, ambitious, fearless, and open to revealing facts about his personal and private life.

His interests and hobbies include watching movies, swimming, listening to music, playing pool, and spending a good time with his family and friends.

Did you know that the estimate of Rudy Gobert’s net worth is 32,7 Million Dollars at the time of writing? the bulk of the player’s wealth stems from his basketball endeavors while others take the form of endorsement.

A such, the basketballer lives a luxurious lifestyle by spending freely without fears of going broke.

This is evident by the manner in which he boards private jets to events and functions. In addition, Judy navigates the streets of Salt Lake City in Utah in exotic cars while there is no doubt that the house he lives in Utah is of extremely high value.

To wrap up our Judy Gobert childhood and biography, here are little-known or untold facts about the basketball genius.

It all started as a simple joke which later became an expensive one. Here is what happened.

Before leaving a post-practice interview session, Rudy Gobert jokingly touched all the tape recorders that were placed before him on a table.

He did that as a way of joking about the Coronavirus without knowing he had it. Check out the video below!

Judy is not religious and he is yet to give clues about his beliefs in the writing. In addition, he has not made statements or moves that give him away as a non-believer.

Thus his position of matters of faith lies somewhere between privacy and the focus on playing basketball.

Unlike most basketball stars, Judy has no tattoos, neither do fans have tattoos of him at the time of writing. The basketballer is rather at peace with his good looks and height of 7 feet 1 inch.

Judy’s birth year – 1992 has political, technological, and peaceful significance. Did you know that it was the year that Bill Clinton became president while Microsoft released Windows 3.1?

In addition,1992 was the year which the cold war was brought to an end. What a historic year!

Not many know that Rudy was given the nickname – “The Stifle Tower” simply because he set the records of 7 feet 8½ inches and 9 feet 7 inches standing reach during his participation in the 2013 NBA Draft Combine.

Thanks for reading our Rudy Gobert Childhood Story plus untold biography facts.

At childhood biography, we strive for accuracy and fairness in our daily routine of delivering the Biography of Basketball Players.

Kindly stay tuned for more articles from our Basketball category. The Childhood Stories of Kristaps Porzingis, Ja Morant, Paul George, and Anthony Davis would interest you.