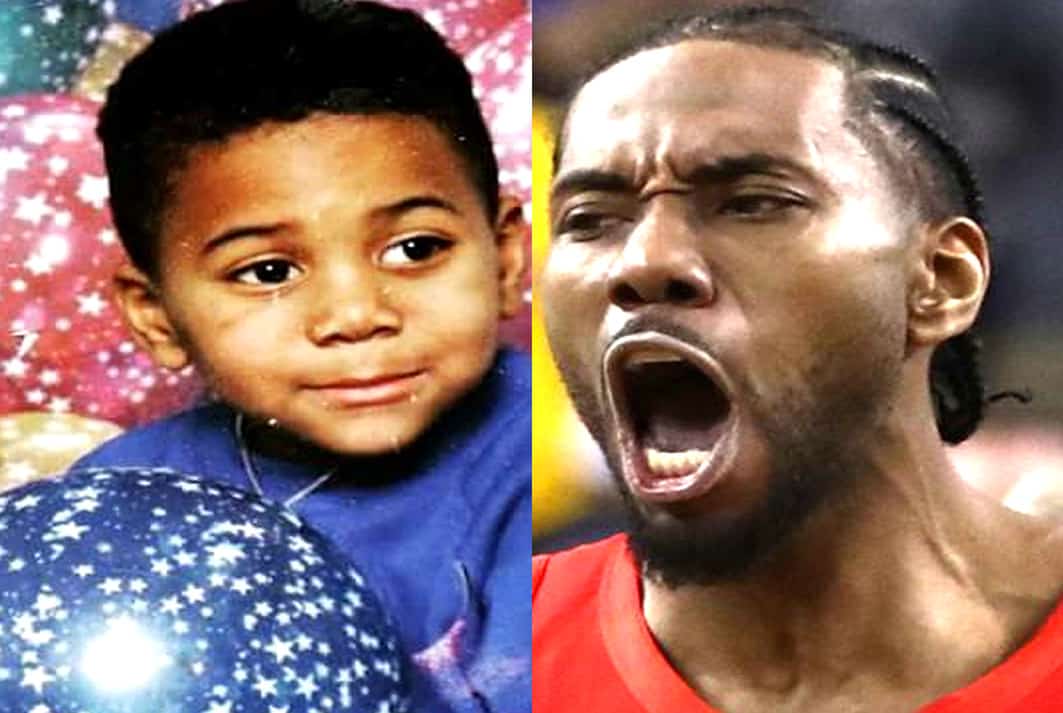 Childhood Biography presents the Full Story of an NBA Star best known with the nickname “The Klaw“.

Our version of Kawhi Leonard’s Biography Facts, including his Childhood Story, brings you a full account of notable events from his boyhood days.

We then proceed to tell you how the NBA star became successful.

More so, Kawhi’s dating history, personal life, family facts, lifestyle and other little-known facts about him.

Yes, everyone knows he is one of the best defensive players the NBA has ever acquired.

However, only a few fans consider our Kawhi Leonard Biography, which is quite interesting. Now, without further ado, let’s begin.

For Biography starters, Kawhi Anthony Leonard was born on the 29th day of June 1991 to mother, Kim Robertson and his late father, Mark Leonard (a car washer) in the city of Los Angeles, California.

He came to this world as the youngest of five children, born of the union between his parents; Kim Robertson and Mark Leonard. Behold, Kawhi Leonard’s parents.

The American national of Afro-American ethnicity comes from a poor family background. Kawhi has his Paternal family origin from America and maternal family roots from Africa.

He was raised at his birthplace in California where he grew up with his elder sisters; Miesha Slayton, Kimesha Monae Williams, and two others whom little is known about.

Early on as a child, the relationship between Kawhi Leonard’s parents began to fall apart, a development that led to a divorce.

Any child who has lived through a parental break-up will know only too well the deep emotional pain and damaging psychological consequences it can have. For Little Kawhi, he was not abandoned by any of his parents.

The game of basketball and football helped strengthen Father-Son relationship as both develop a common interest in sports.

The love for basketball later prevailed for Leonard with his dad in full support of his son taking up a career in it. 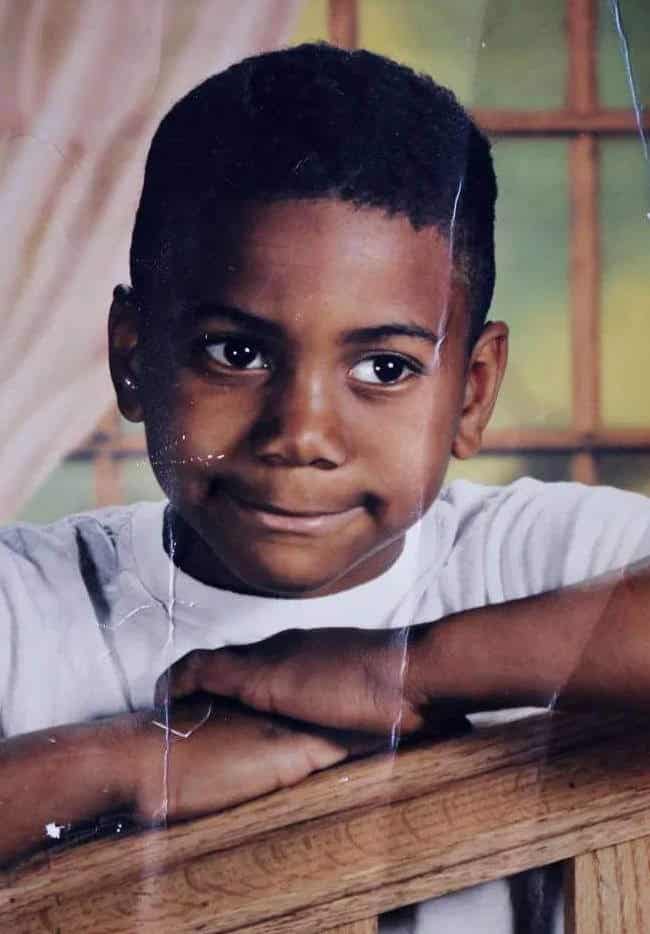 While growing up in LA, Kawhi Leonard like every other American kid would always go out to play basketball with his friends.

His love for the game was enormous that he insisted on playing basketball the evening after his father was shot dead in 2008. Sadly, after the game, he broke down emotionally.

The death of his father was a huge blow to Leonard who was at the moment studying at Canyon Springs High School in Moreno Valley, California.

Having lost his football partner as well as his basketball motivator, Leonard decided to make his late dad proud by vowing to become an excellent and successful basketball player. Even while he played the games, little Leonard made his grades. 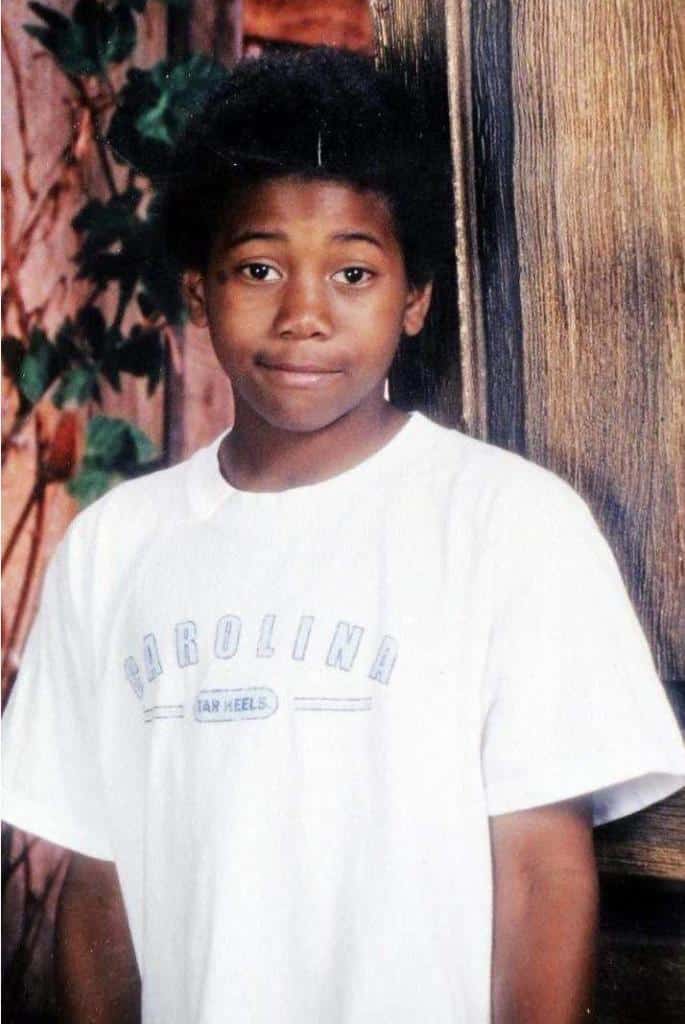 In order to lay a better foundation to his basketball career, Leonard initiated a transferred to Martin Luther King High School where he joined the King High Wolves, basketball team.

During his senior year at Martin Luther King High School, Kawhi Leonard and his friend Tony Snell led their team to a 30-3 record during which he was awarded ‘California Mr Basketball’.

Owing to Kawhi Leonard’s performance in high school, he was listed in the recruiting rankings of 2009 as the No. 8 small forward and the No. 48 player nationwide.

That same 2009, Kawhi Leonard enrolled at San Diego State University in the same year. While in the university, he joined the Aztecs and averaged 12.7 points and 9.9 rebounds for his team.

His contribution to the team helped Aztecs earn a 25-9 record, a feat which led them to win the Mountain West Conference (MWC) tournament title. 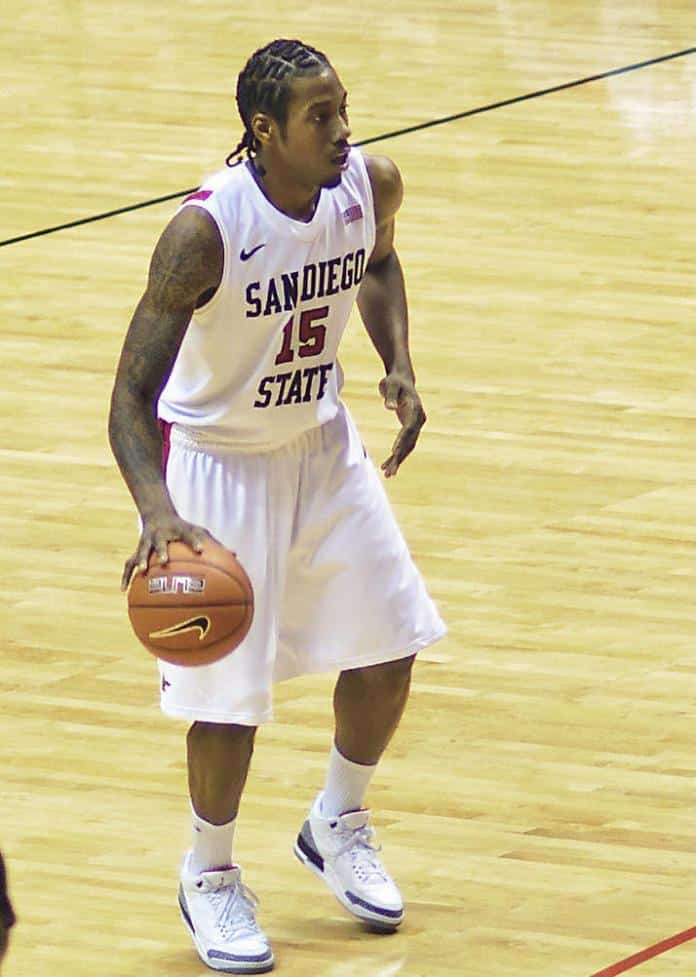 Due to their grand achievements in the MWC tournament, Aztecs received an automatic bid to the NCAA tournaments. Things didn’t go well as planned.

His team lost in the first round to Tennessee, 62-59 with Leonard recording 12 points and 10 rebounds. Leonard was disappointed with the result of their match but was still determined to continue fulfilling his dad’s wish. 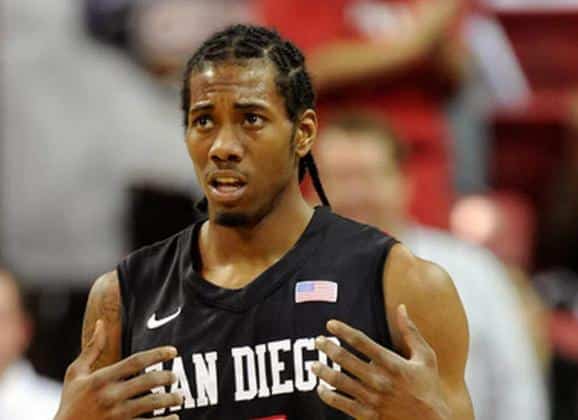 With the GUTS of never giving up, Kawhi Leonard later went on to lead his team to achieve success in the NCAA tournament.

This time, Aztecs advanced into the sweet 16, but suddenly lose to national Champions, UConn. These defeats made him become a better defensive basketballer.

Not too long after the NCAA competition, Leonard left San Diego State as he was selected as the number 15th overall pick in the 2011 NBA draft by the Indiana Pacers.

He was later traded to San Antonio Spurs where he began to greatly unleash his defensive prowess. 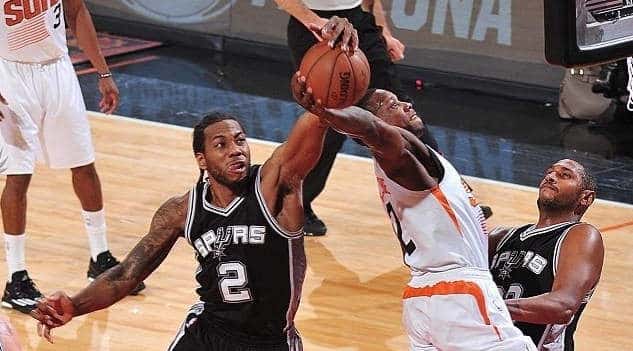 Fast forward to the time of writing, Leonard has endured a meteoric rise to prominence in recent months to become one of the hottest young properties in the NBA.

The 2014 and 2019 are the most successful years for Kawhi as he won similar awards namely- NBA champion, finals MVP and a selection into the NBA All-Defensive Team. 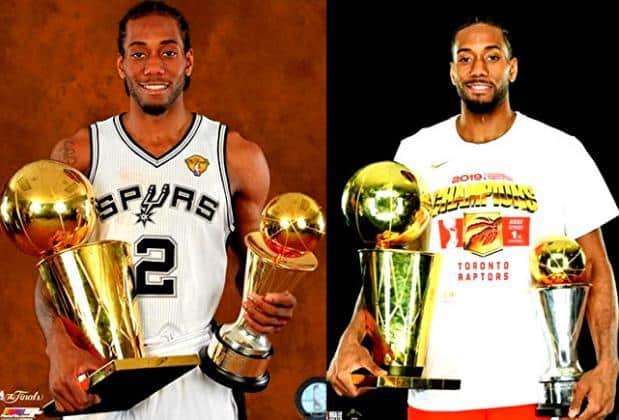 Without a doubt, the dreams he’d shared with his late father many years ago have been realized. The rest, as they say, is history.

With his rise to fame and achieving many honours in the careers, it’s obvious that lots of NBA fans must have made inquiries on who Kawhi Leonard’s girlfriend or wife might be.

First, regarding his relationship status, Leonard is yet to be married at the time of writing, but he has a girlfriend.

Leonard has been known to have dated only one lady since he became famous. Behind the successful NBA star, there exists a glamorous girlfriend in the person of Kishele Shipley. 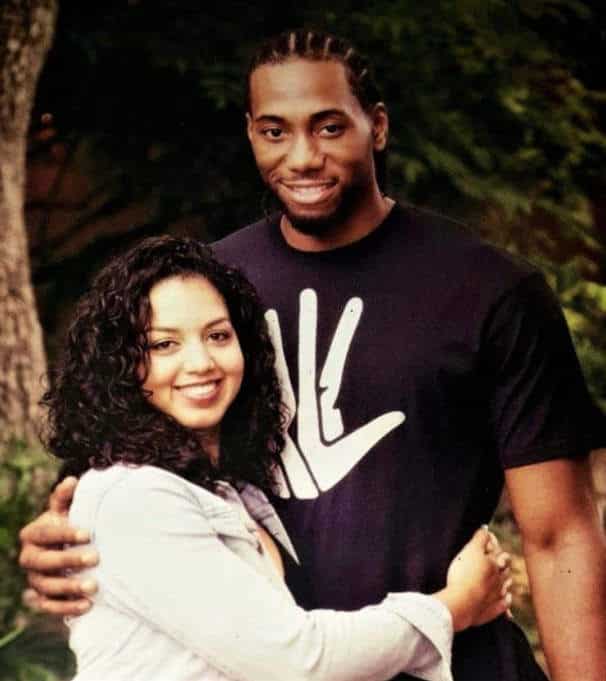 Both love-bird had been dating since 2014. Leonard does not give many interviews about her and the details regarding how they met still remain a mystery.

According to a source, Kawhi Leonard met his girlfriend when both attended the same University.

Kawhi Leonard’s girlfriend Kishele Shipley gave birth to their first child – a girl, Kaliyah Leonard who was born in July 2016. In March 2019, little Kaliyah Leonard had a brother. 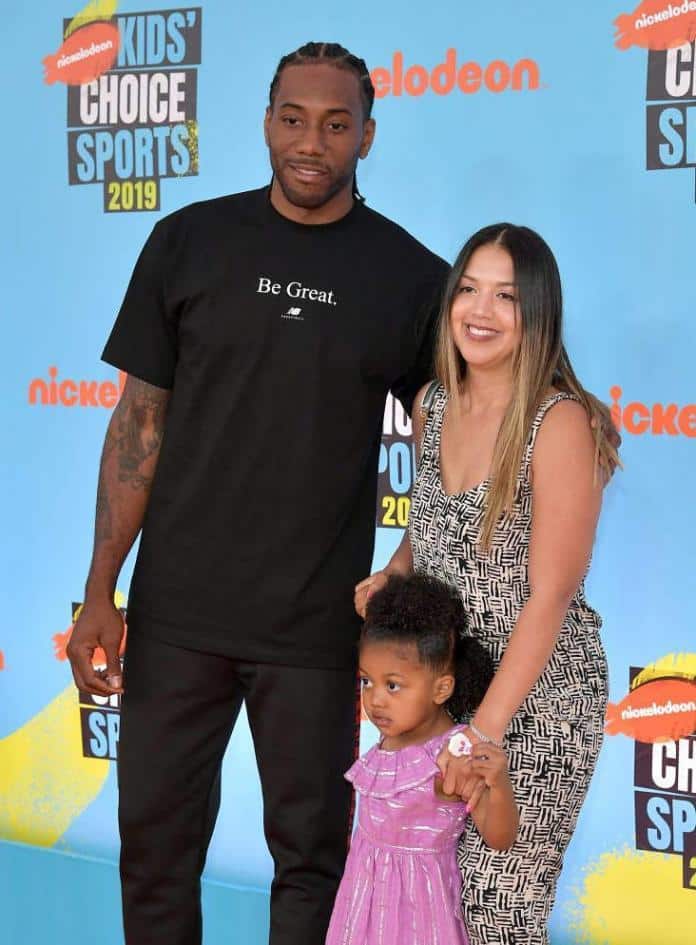 Leonard comes from a lower-class family background and thanks to basketball, his entire family now enjoys an upliftment in their status. In this section, we bring you facts about his family life.

Mark Leonard was Kawhi Leonard’s dad. Early on before his death, he ventured into a car washing business to support his family. Mark owned a car wash in Compton where he was murdered in 2008. 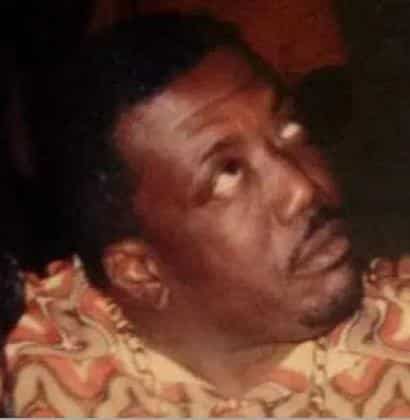 About Kawhi Leonard mother and siblings:

Kim Leonard is Kawhi Leonard’s mom. He also has four elder sisters of which only the names of two – Miesha Slayton and Kimesha Monae Williams – have been mentioned on social media. Kimesha has had some bit of trouble lately.

She was once arrested without bail for the murder of 84-year-old Alaf Anis Assad in September 2019. Leonard loves to keep information about her very private.

Away from Leonard’s immediate family, his maternal grandmother is named Wanda Robertson while his paternal grandparents are Josephine Anna Ford and Henry Francis Leonard. His cousin is the American football player Stevie Johnson.

Details about his maternal grandfather, uncles, aunts, nephews, and nieces are very much unknown at the time of writing. 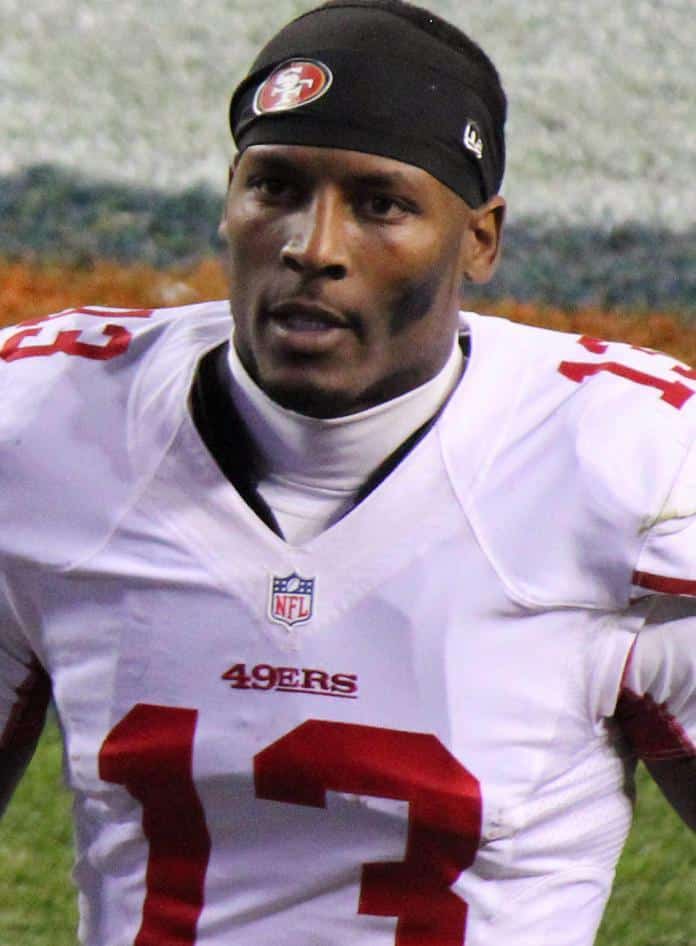 Owing to his absence from social media, a lot of questions have been raised regarding Leonard’s personal life facts. In light of such curiosity, we bring you makings of his personality.

To begin with, Leonard’s persona is a blend of Cancer. He is gentle, calm and doesn’t want too much attention from the public.

Leonard avoids sharing much of his details on social media. Asides basketball, he has hobbies and interests in football as we earlier recalled his football activities with his dad. 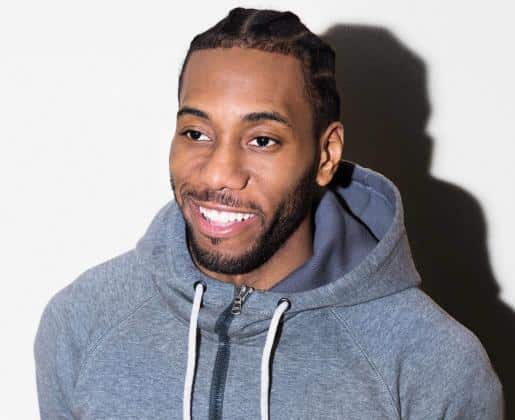 Kawhi Leonard is worth an estimated sum of $35 million at the time of writing. The origin of his wealth stems majorly from his basketball endeavours and endorsement deals with Nike which later expired in 2018.

Analysis of his lifestyle shows that he lives a luxurious life which is easily noticeable with his home acquisition.

To start with Leonard’s assets, he purchased a house set on five acres of land at Rancho Santa Fe with the whooping sum of $13.3 million.

The NBA star still maintains a low-key private life as he continues to use his 20-year-old SUV which was nicknamed Gas Guzzler.

Kawhi Leonard was nicknamed “The Klaw or Claw” because of his ball-hawking skills which is one of the unique techniques that has earned him his defensive capabilities.

Leonard is a Christian and doesn’t seize to talk about his faith and belief in God. He has on several occasions talked about how he trusted God. To take charge of his condition each time he has an injury. His religious belief can be seen in the tattoo he inked on his body.

Even though the talented NBA star is known for his quiet nature, he has inked some tattoos befitting of his status in the world of basketball. He inked on his right arm a Cross and also the words “Fear God Not Them”. 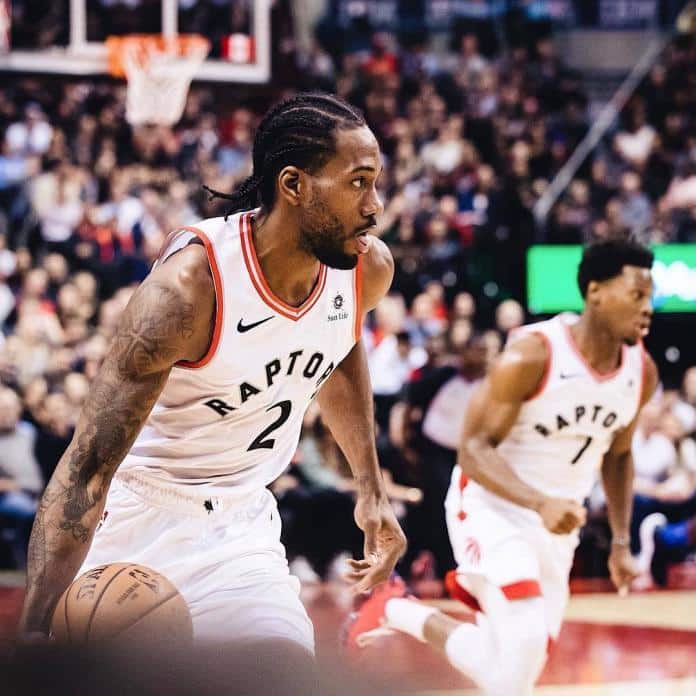 Leonard has a thing for drinking but not much is known about whether he smokes or not.

He was asked by his teammate Serge Ibaka in June 2019. About what junk food he can’t wait to eat after taking care of his body all year. His answer was “I’m just drinking alcohol and eating desserts all the time.”

Thanks for reading our Kawhi Leonard Childhood Story plus untold biography facts. At childhood biography, we strive for accuracy and fairness while delivering the Biography of Basketball Players.

Stay tuned for more NBA players’ life stories. You might find some interest in the Childhood stories of Trae Young, Kristaps Porzingis, and Ja Morant.