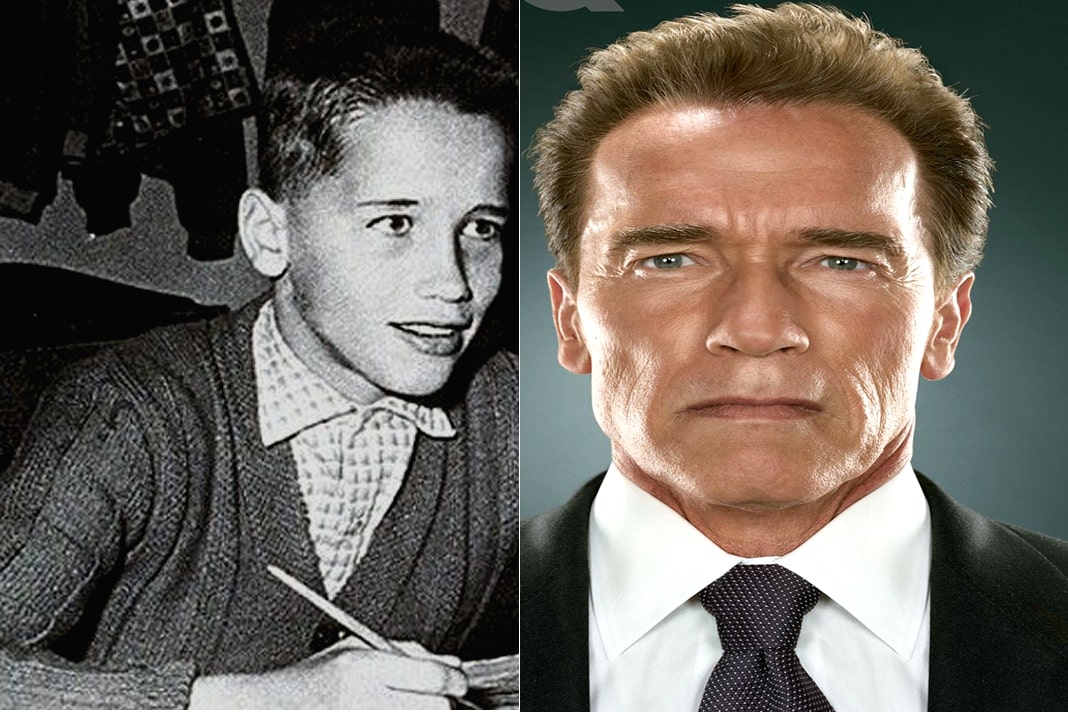 In the nutshell, this is a Life Story of the Austrian-American actor, from his boyhood days to when he became famous.

To whet your autobiography appetite, here is his childhood to the adult gallery — a perfect summary of Arnold Schwarzenegger’s Bio.

Yes, everyone knows about his great movies, body build, and the fact that he is also a great politician. However, only a hand few fans consider Arnold Schwarzenegger’s Bio, which is quite interesting. Now, without further ado, let’s begin.

Baby Arnold pictured above was born into a strict household and raised as a devoted Roman Catholic.

His parents were strict in every sense owing to the Nazy influence. Whenever anything went wrong or anyone disobeyed, the rod wasn’t spared.

It was a hallmark that ensured that Young Arnold and his siblings were disciplined whenever they erred.

Being raised by Roman Catholic parents ensures that young Annie and every member of his family must attend Sunday Masses well dressed up as seen in the photo below. 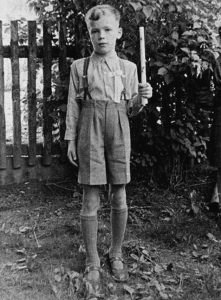 Pictured below is Arnold at 14 in school. His comportment showed how serious he was in school. It exhibits the makings of one brought up by disciplinarians.

As a teenager, Arnold was preoccupied with education and was top of his class. 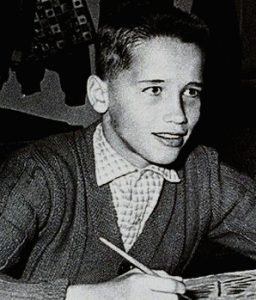 Training to become a good soccer player saw him undertake an all-around physical development, which he later majored in by becoming a body-builder. 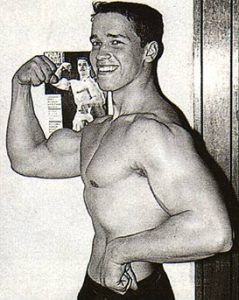 His choice to become a bodybuilder didn’t go down well with his parents, who had different choices of careers for him.

Starting off, his father wanted him to tread the path of law enforcement, wanting his son to become a police officer like him.

On the other hand, Arnold’s mother wanted her son to study trade in school.

Nonetheless, Arnold was determined to take his bodybuilding career to unimaginable heights without his parent’s consent. He was also well prepared for the consequence his actions might cause.

Arnold realized the quest to be independent from his parents, thus making him make important decisions in his early life.

Starting off, he served in the Austrian Army in 1965 to fulfil the one year of service required at the time of all 18-year-old Austrian males.

During his army service, he continued his bodybuilding quest and won the Junior Mr. Europe bodybuilding contest, which made him popular.

He went AWOL in an attempt to skip military duties but got caught and sent to the Austrian military prison for a week.

After military duties were over, Arnold went on to compete for different European bodybuilding contests, some of which he took second and others, the first position. 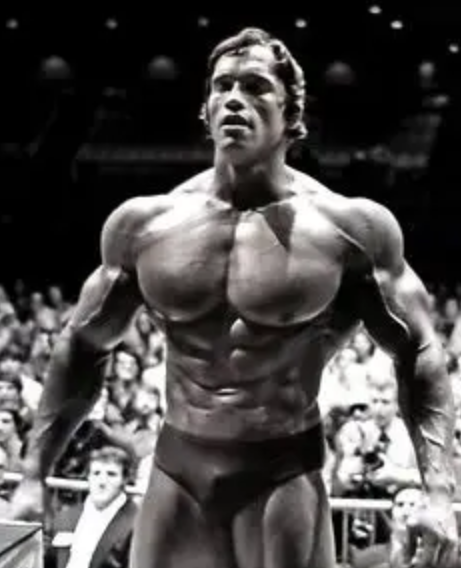 Soon, he got voted as the best-built man of Europe, which made him famous. The biggest came from his “Mr Universe” title which was his ticket to America—the land of opportunity.

Arnold made his first plane trip in 1966 using his bodybuilding popularity as the avenue to go places. He also learned how to speak English at this time.

Arnold while in America saw more opportunities in acting than bodybuilding. This ignited a move from bodybuilding into acting.

He finally achieved it when he was chosen to play the role of Hercules in the 1970’s Hercules in New York. Arnold, after his first movie, faced difficulties being called for further movies because of his size. In his words…

“It was very difficult for me in the beginning – I was told by agents and casting people that my body was ‘too weird’, that I had a funny accent, and that my name was too long. You name it, and they told me I had to change it. Basically, everywhere I turned, I was told that I had no chance.”

His breakthrough film was the sword-and-sorcery epic Conan the Barbarian in 1982, which was a box-office hit.

This was followed by a sequel, Conan the Destroyer, in 1984, although it was not as successful as its predecessor.

However, Schwarzenegger’s commercial peak was his role in the movie Terminator 2: Judgment Day, which was the highest-grossing film of 1991. 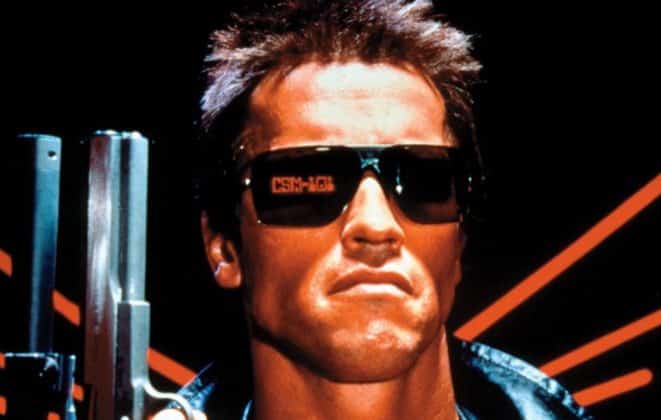 His career signature role in the movie “Terminator” made him got the fame he dreamt of. The rest, as they say, is now history.

Between the late 1960s and mid-1980s, Arnold had relationships with a number of interesting female personalities, including actresses, Eleanor Mondale and Brigitte Nielsen, bodybuilder, Kellie Everts and author Barbara Baker.

These are just a few notable personalities Arnold had a stint with.

Arnold got married to an American Journalist and niece to former American President John F. Kennedy, Maria Shriver, on the 26th of April 1986. 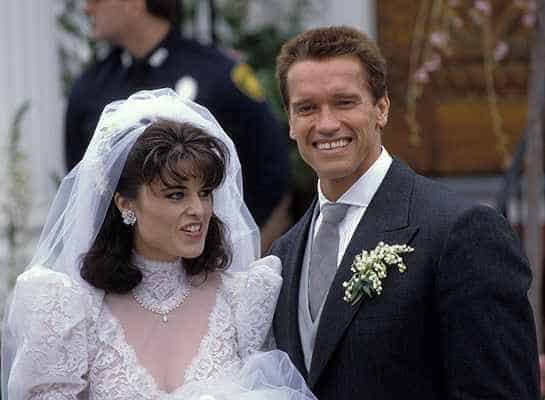 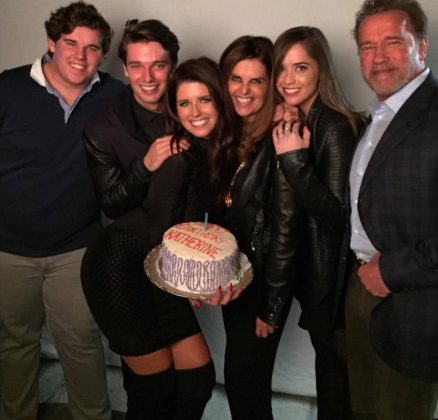 On May 9, 2011, Shriver and Schwarzenegger ended their relationship after 25 years of marriage, with Shriver, his wife, moving out of the couple’s Brentwood mansion. Although there have been reports of separation between the couples since 2011.

Arnold owned up to being the cause of the rift as he admits to having an affair with their housemaid, Mildred Baena, who bore him a son, Joseph. 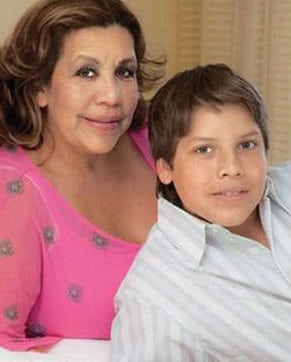 Arnold had stated that he came to know about him fathering a son with Mildred only when the kid grew up and started to look like him.

A look at Arnold and his son Joseph would make you agree that, indeed, a father-son resemblance truly attributed to his marriage problems. 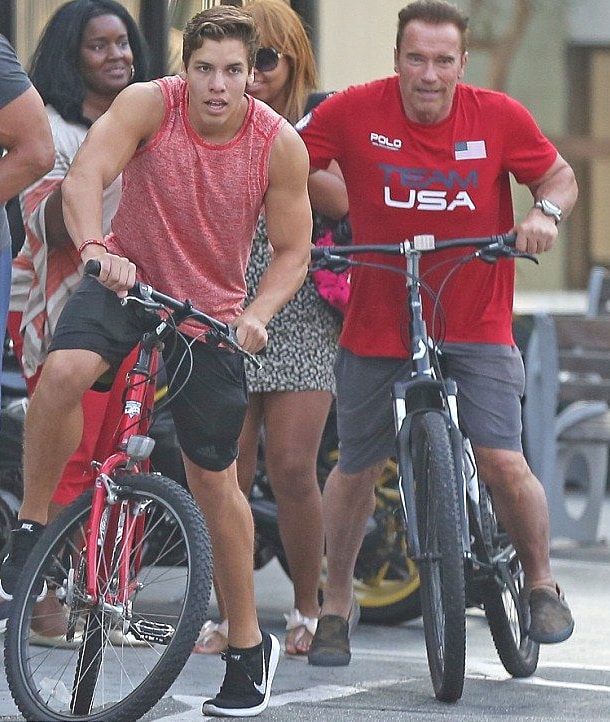 After the divorce, he took full responsibility for the kid. However, he claims that he is yet to make the separation law binding as he has not signed the divorce papers filed by his wife seven years ago.

Arnold grew up in a Catholic family that upheld discipline. We give you a brief detail of the members of his family.

Arnold’s father, Gustav Schwarzenegger, was born on the 17th of August 1907. Gustav pictured below had a belief that Arnold was not his biological son and would favour his elder son Meinhard over his younger son. 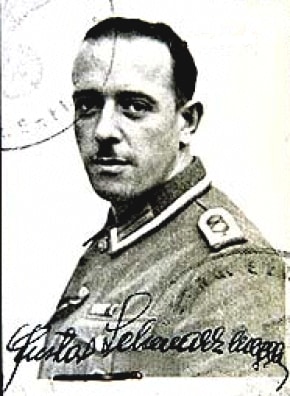 He voluntarily joined Nazy Party in 1938 and served Germany in World War II as a military police officer. After the war, he was deployed to Weiz, Austria, where he served as police chief until his death.

Gustav was discharged from the army in 1943 as he contracted malaria. Arnold did not attend his father’s funerals.

In an interview to Fortune in 2004, he stated child abuse at the hands of his father was the reason for not attending the funeral.

At the time of his father’s death, he was in America shooting for “Pumping Iron.” His then-girlfriend Barbara Baker was shocked that he delivered his father’s demise without any emotion.

Arnold recognizes the importance of reputation, especially as it relates to his family. While making it big in America, he got determined to protect his family name.

Hence, he sought the services of a research center, [Simon Wiesenthal Center], to look into his father’s war records.

Findings of the research revealed that his father had no connection with atrocities meted out by the infamous Nazi party and SA (Sturmabteilung) whose memberships he retained before his death.

Arnold’s mother, Aurelia Jadrny Schwarzenegger, was born on the 29th day of July 1922. 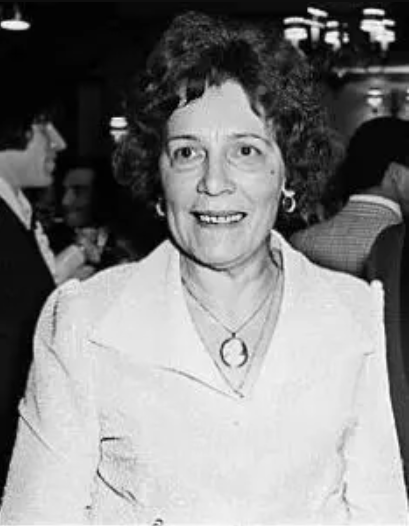 She got married to Arnold’s father on the 5th of October 1945 and bore two sons, Arnold and his elder brother Meinhard. Arnold was in a good relationship with his mother and stayed in touch with her till her death. 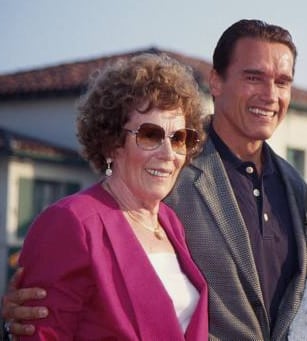 His mother died of a heart attack on the 2nd day of August 1998 when visiting her husband’s grave and was consequently buried close to him.

Arnold only had an elder brother, Meinhard Schwarzenegger. Meinhard (pictured below) died in a road accident a year before their dad and leaving his 3-year-old son Patrick behind. 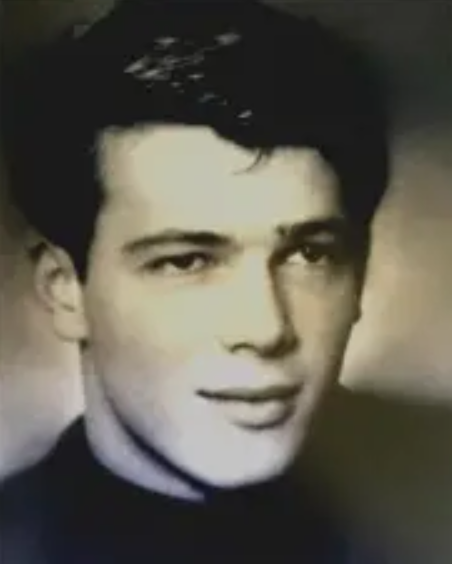 Arnold, after his brother’s death, took care of his son Patrick. He paid for his education and helped him to immigrate to America. Arnold never spoke about his brother before his death. Neither did he attend his burial.

Given Arnold’s present celebrity status, it would be surprising to note that he was not his father’s favourite.

His father, Gustav, was favourably disposed to his eldest son, Meinhard. Whatever paternal love Arnold lacked from his father, he made it up in his mother. It was a bond that continued until her death.

It is unarguably true that Arnold had the best of times with bodybuilding. Now we give you some untold facts about his bodybuilding career. 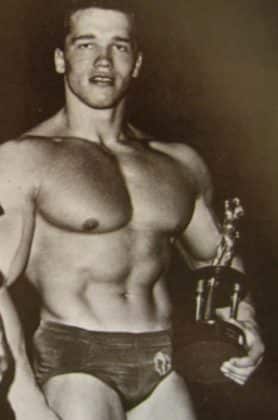 In December 2001, he broke six ribs in a motorcycle crash in Los Angeles. “It was very painful, much more painful than the heart surgery,” he said at the time, referring to an operation he had in 1997 to replace a heart valve. 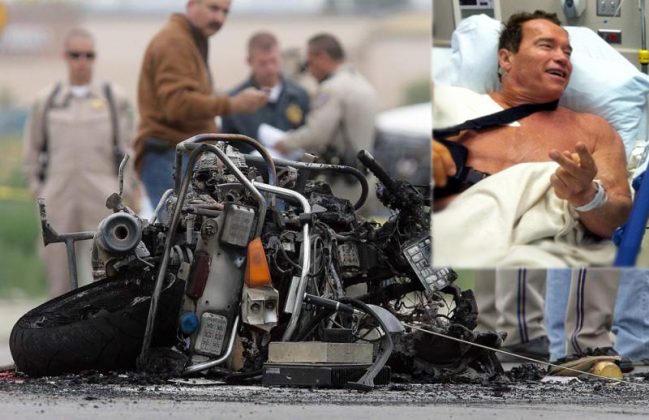 In 2005, when he was riding a Harley Davidson with his son Patrick met with an accident near their Brentwood home. He received 15 stitches on his lips. 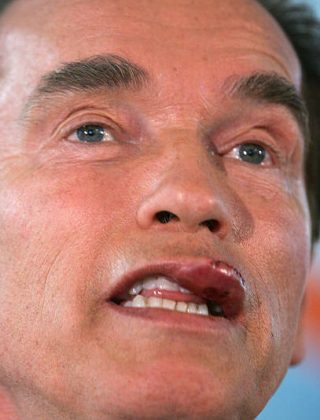 At some point in his life, he took the responsibility to give services to humanity. Arnold’s first step to serving as being involved in politics was undoubtedly successful for him.

His first political appointment was chairman of the President’s Council. He chaired the council’s Physical Fitness and Sport, a position which he occupied between 1990 and 1993.

He subsequently served as chairman of the California Governor’s Council on Physical Fitness and Sports under the administration of Pete Wilson.

However, the big day came. On the 7th day of October 2003, Arnold was elected governor of California and later re-elected on the 7th of November 2006. 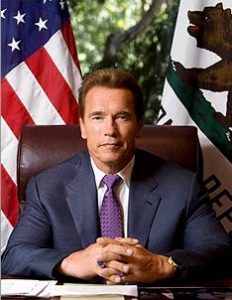 Arnold became the second actor to be elected as the Governor of California. The first was Ronald Reagan.

Thanks for reading our Arnold Schwarzenegger Childhood Story, plus untold biography facts.

At ChildhoodBiography, we strive for accuracy and fairness in our daily quest to deliver you the Biography of Famous Actors. Surely, that of Al Pacino, Dave Bautista, Denzel Washington, and Tom Hanks will interest you.