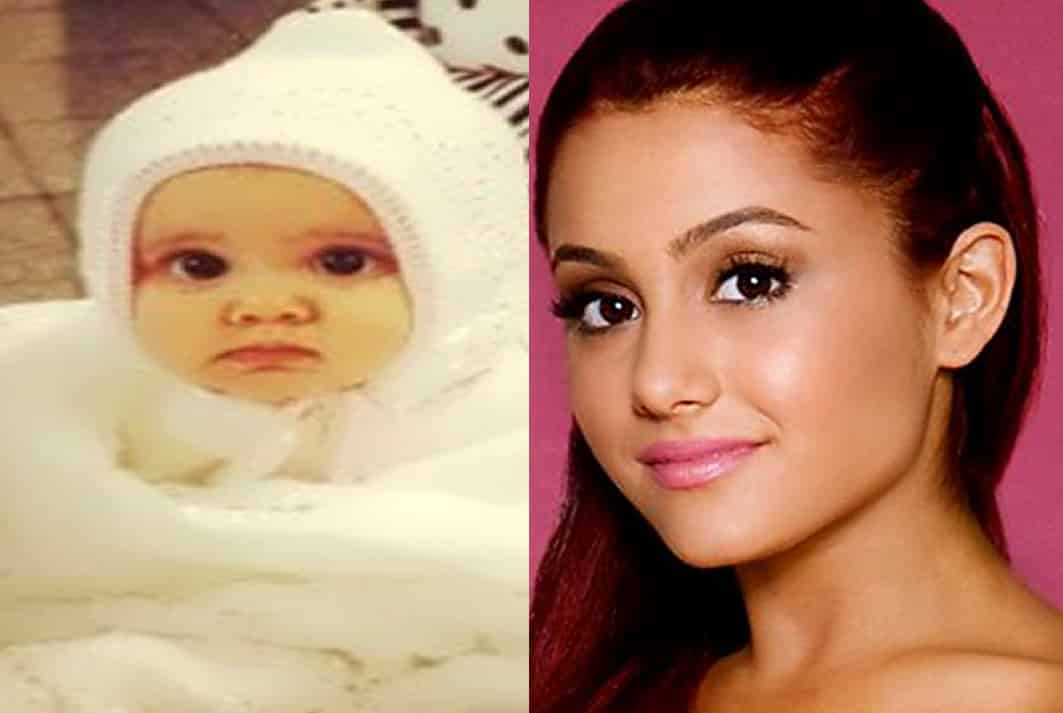 Childhood Biography presents the Full Story of an American singer best known by the nickname “Ari”.

Our Ariana Grande Childhood Story plus Untold Biography Facts brings you a full account of notable events from her childhood time to date.

The analysis of the American Singer involves her early life, life story before fame, family background and personal life. More so, other OFF and ON-Screen little-known facts about her.

Yes, everyone knows about her unusual vocal timbre. However, only a few consider Ariana Grande’s Biography, which is quite interesting. Now, without further ado, let’s begin.

For Biography starters, Ariana Grande was born on the 26th day of June 1993 at Boca Raton in Florida, USA. She shares Florida as a birth city with celebrities that include, Roman Reigns, Rick Ross, Wesley Snipes, William H. Macy among others.

Baby Ariana was born to her mother Joan Grande (executive director of a communications company) and to her father Edward Butera (a graphic designer). 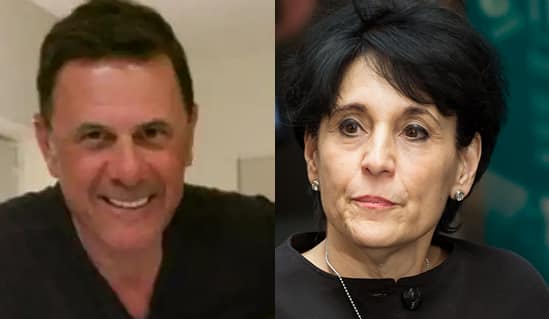 Growing up in Boca, a small town in the eastern part of Florida, young Ariana had the loving company of her parents and half-brother Frankie (pictured below with Ariana). They sure looked cute and adorable.

Her financially buoyant parents were creative couples who made The Arts a part and parcel of their childhood upbringing. As a result, Ariana was often taken to the musical theatres before she was aged 4.

Four Years later, the young girl (pictured below) made her first appearance on Television singing the USA national anthem at the Florida Panthers Hockey Game.

Added to the TV debut was her performance in the musicals of the Wizard of Oz as well as Beauty and the Beast. 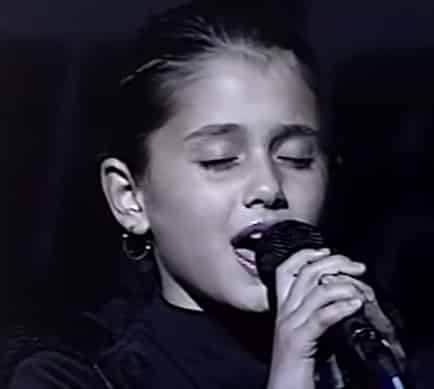 The aforementioned were just a few of Ariana’s early endeavors, especially when compared to many others, which she would later make while recording academic progress.

Ariana had her basic education at Pine Crest School in Boca Raton before proceeding to North Broward Preparatory School in Florida for her high school education. 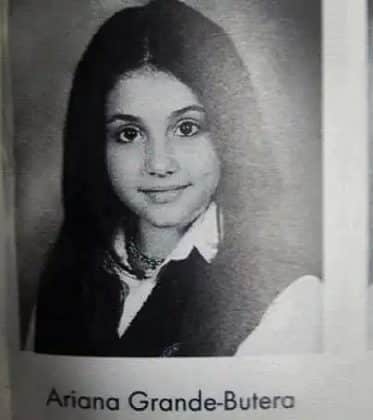 It was at the high school that Ariana aged 13 resolved to build a career in music. To that end, she trained her voice under the tutelage of Eric Vetro (pictured below), a vocal coach who is known to have improved the voices of Katy Perry and Jason Durelo. 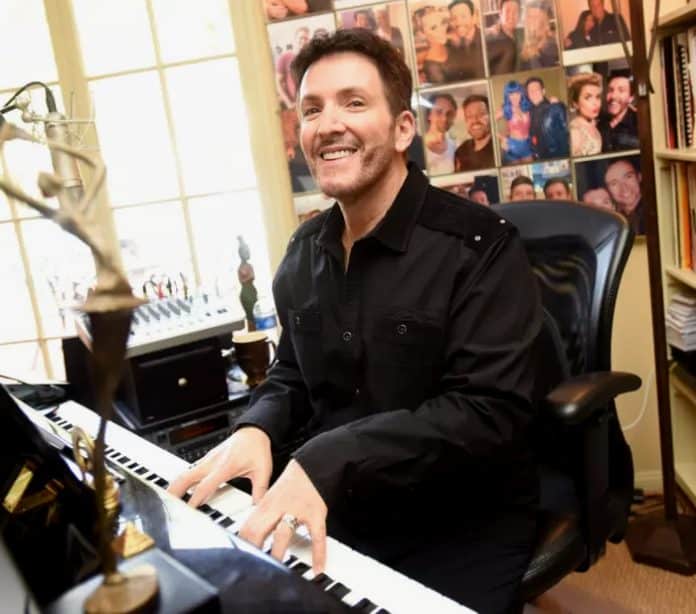 Upon completion of the training classes, Ariana was offered a testimonial certifying her fit to launch a career in music. Thus began the Journey of the young teenage girl to fame in the music industry.

The first stop on the 13-year-old Journey was in Los Angeles where she met with Managers to communicate her desire of recording an R&B album.

Sadly she wasn’t taken seriously on account of her age. Who would have taken a 13-year-old- serious?.

A dejected Ariana fell back on acting classes with hopes of living to fight her way into the music industry another day.

While at acting classes she was able to secure casting as Charlotte in the successful Broadway Musical 13. The role won Ariana her first prestigious award from the National Youth Theater Association. 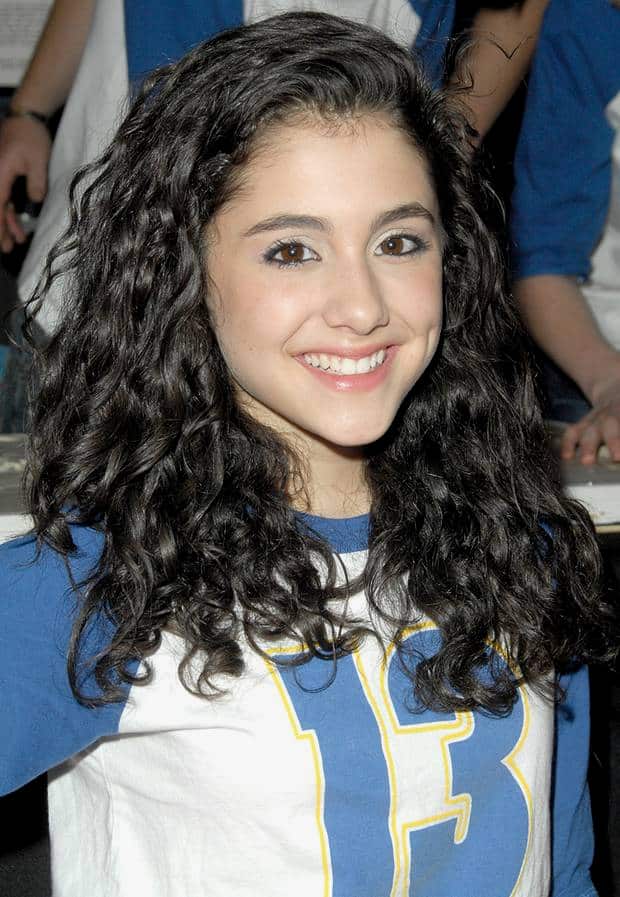 Following Ariana’s success with Broadway Musical 13, directors sought after her, bringing offers she could not reject.

As a result, her budding popularity made it difficult for her to study in school like a normal high school kid but received education materials remotely at home. What a rapid change of circumstance.

The teenager who had been fanning the embers of fame on television finally had her breakthrough in 2009 when she was cast in the Nickelodeon television show Victorious.

It, however, cost Ariana her hair colour from beautiful brown to velvet colour. That’s a small price to pay anyway. 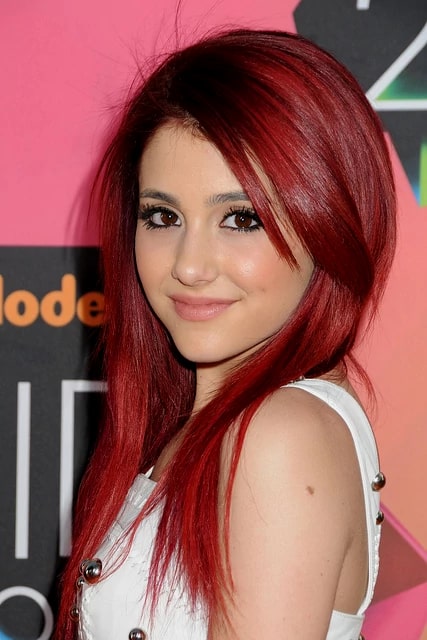 The next year in 2010, Ariana made another attempt at entering the music industry. Save for This time, she wasn’t travelling around seeking managers to record her demo.

Approaching success from a different angle she put up appearances in soundtracks and perhaps motivated by Justin Bieber success story, uploaded videos of herself singing on YouTube.

This caught the attention of Monte Lipman, CEO of Republic Records, who signed her to his record label. While at the record label she recorded singles, intertwined singing with putting up more TV appearances and in 2013 released two albums “Yours Truly” and “Christmas Kisses”.

Both contained singles that topped billboards and received positive acclaim from critics. The rest, as they say, is history.

The life of celebrities is arguably predictable like the rise and setting of the sun. From breakups, makeups, marriage and divorce American singers and Hollywood celebrities seem to get everything right except a lasting relationship. we bring you details about Ariana’s past and present relationship life.

First was her “pre-fame” relationship with Graham Phillips. The duo met in 2008 while starring in Broadway Musical 13. They dated for three years before going separate ways. 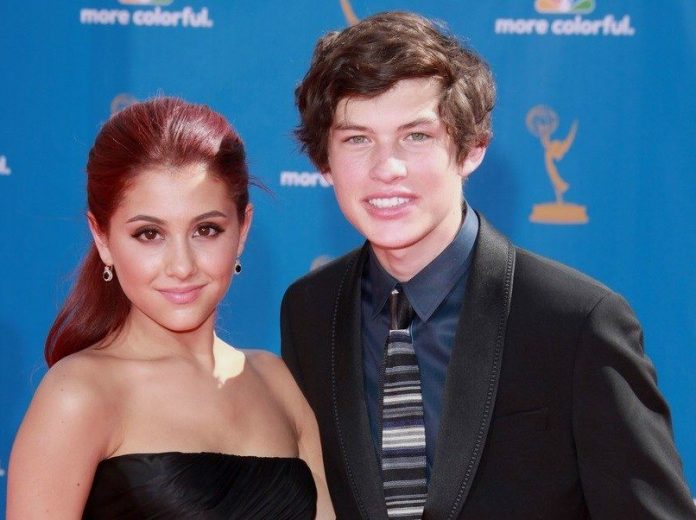 She thereafter had on and off long-distance relationships with Jai Brooks. The former lovebirds met via the internet and had off and on relationships.

Brooks lived in Australia for the better part of their relationship while Ariana stayed in the US. They dated until 2013 before bringing their unusual celebrity relationship to an end. 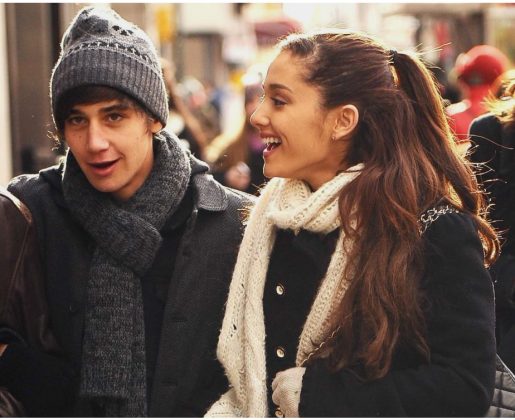 Moving on Ariana had what could be best described as romantic stints with Nathan Sykes (3), Big Sean (4) and Ricky Álvarez (5). All three were relationships that only lasted for a few months.

Ariana is also known to have dated the late rapper Mac Miller who died of an accidental drug overdose in September 2018. She had, however, amicably split with the rapper before his death months later. 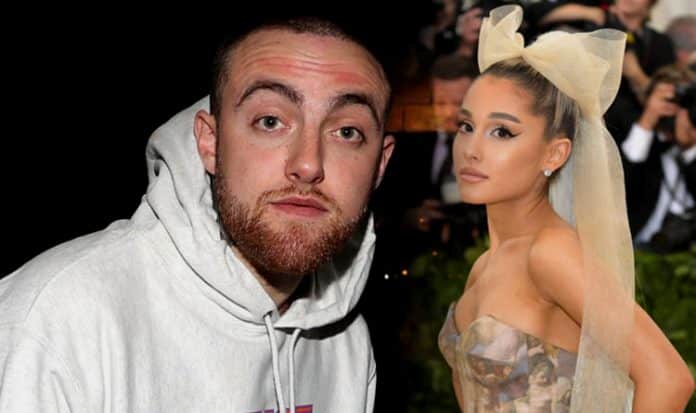 The latest of her relationship was with Pete Davidson. They got engaged in June, a few months after she broke up with Late Mac Miller.

Fast forward to date Pete Davison is now referred to as Ariana’s ex-fiance and friend, owing to the fact that the death of Mac Miller affected Ariana and put a strain on their relationship. 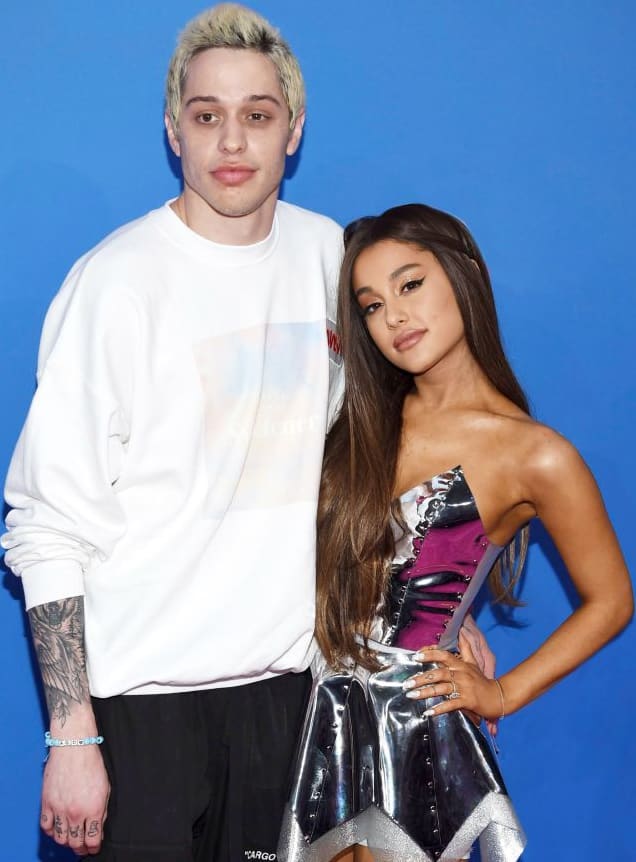 Ariana Grande was born into a family of four we bring you details about her family.

Starting off, Edward Butera is the father of the singer. He was born on the 20th of September 1958.

Edward who owns a graphic design firm called IBI designs in Boca Raton divorced Ariana’s mother when the singer was 8 years old. Nonetheless, he keeps in touch with his daughter and supports her endeavours. 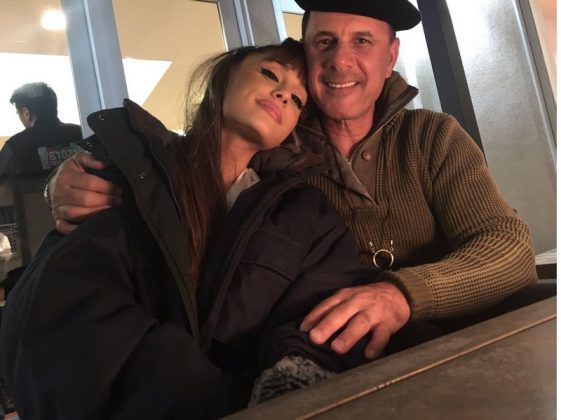 Joan Grande is the mother of the singer. She was born on the 11th of June 1968. The singer refers to her mother as hardworking.

Joan is indeed hardworking given the fact that she’s the Chief executive officer of Hose-McCann Communications. 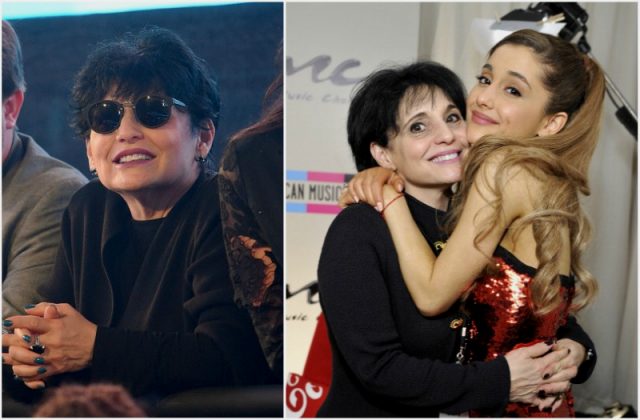 Ariana has a half-brother known as Frankie J. Grande. Frankie who grew up with the singer was born of a previous relationship between Ariana’s mother Joan Grande and a certain Victor Marchion.

Frankie like his sister has recorded successes in the music industry as an artist and producer. Though he has since admitted to being gay, Ariana still loves him as a brother.

The 22nd of May 2017 was a sad day for Ariana and the music industry, owing to a suicide bombing in Manchester Arena of Manchester City after Ariana Grande’s concert.

Fans who had attended the concert were leaving when an Islamic terrorist detonated a shrapnel-laden homemade bomb, killing no fewer than 23 people and leaving 139 others injured. 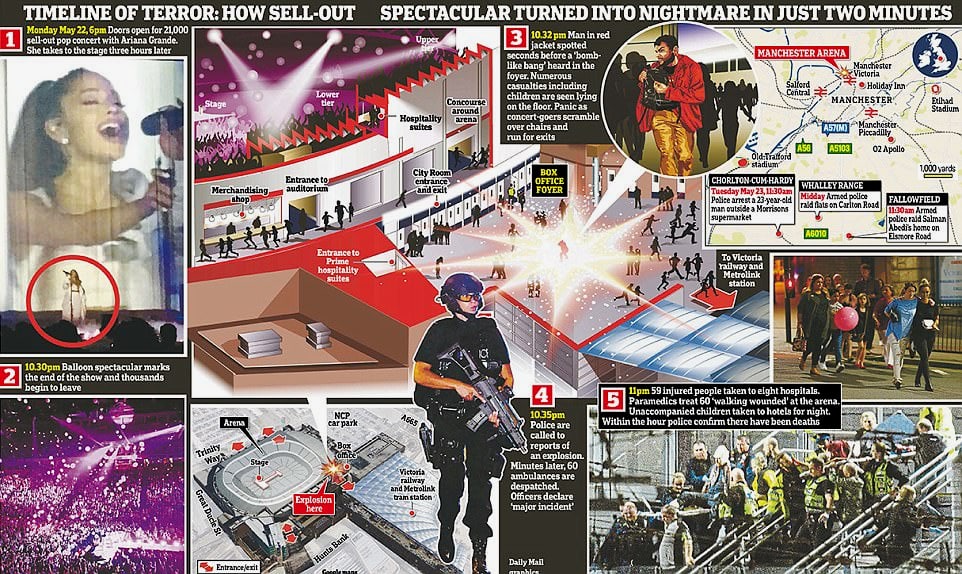 The attack left a devastating memory in Ariana who reportedly wept uncontrollably for days.

“Ariana cried for days after the Manchester Arena attack and felt “every name” of the victims who died in the bombing”.

Two weeks later, Ariana and other stars performed at the One Love Manchester concert to raise funds for those affected by the tragedy.

A shocked Ariana could not discuss the attack on her concert until a year later when she first made comments about it in the following manner:

“It’s the absolute worst of humanity, Music is supposed to be the safest thing in the world. I think that’s why it’s still so heavy on my heart every single day. I wish there was more that I could fix.

You think with time it’ll become easier to talk about. Or you’ll make peace with it. But every day I wait for that peace to come and it’s still very painful”.

Ariana has been able to secure a number of endorsement deals given her popularity on TV and the music industry.

Ariana is a lively, spirited singer with a romantic personality. The beauty who loves long hair and a big ponytail admirably balances her professional and personal life in unimaginable ways. Endowed with a cute and cupid face it suffices to say her Personality is Still like a Growing Teen.

Regarding her beliefs, Ariana was raised as Roman Catholic but abandoned Catholicism because of its opposition to homosexual marriage.

Well, that shouldn’t strike anyone as a surprise given that she’s trying to promote the interests of her gay brother.

Away from religion, she follows Kabbalah teachings which advocate being nice to others for the purpose of attracting good things to oneself. 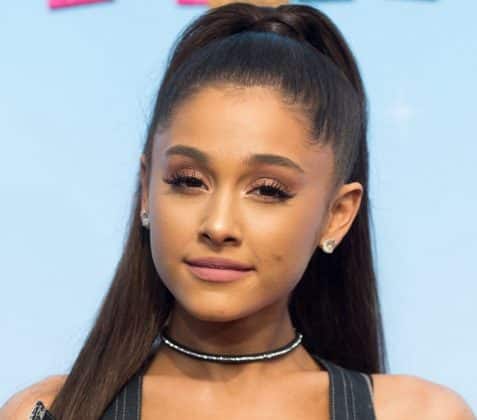 Little wonder she has a few philanthropic endeavours to her credit, including performing for charitable fund-raising events and accepting features in magazines to promote just causes.

On the flip side of her personality, Ariana has bizarre mood swings and could sometimes put up distasteful attitudes in Public.

FACT CHECK: Thanks for reading our Ariana Grande Childhood Story, plus untold biography facts. At ChildhoodBiography, we strive for accuracy and fairness. If you see something that doesn’t look right in this article, please place your comment or contact us!