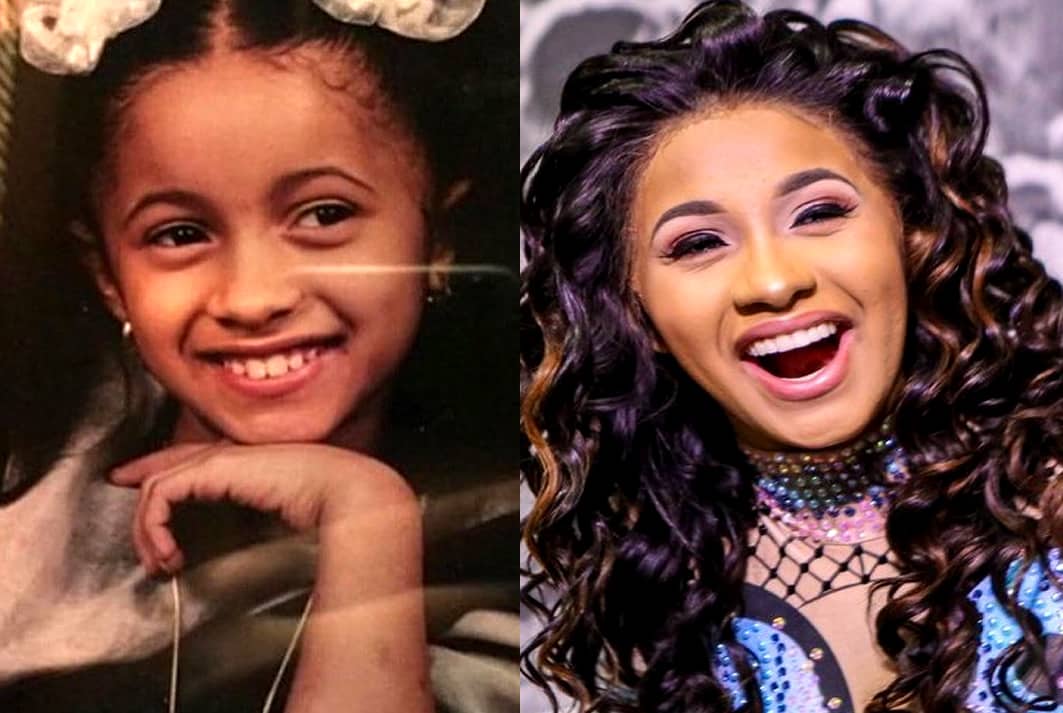 Childhood Biography presents the Full Story of an American rapper best known as “Cardi B“.

Our version of Cardi B’s Biography Facts, including her Childhood Story, brings you a full account of notable events from her early days.

We then proceed to tell you how Belcalis Marlenis Almánzar, became successful in her Music career.

More so, Belcalis’s dating history, personal life, family facts, lifestyle and other little-known facts about her.

Yes, everyone knows of her aggressive rap flow and candid lyrics. However, only a few consider Cardi B’s biography, which is quite interesting. Now, without further ado, let’s begin.

For Biography starters, Belcalis Marlenis Almánzar professionally known as Cardi B was born on the 11th day of October 1992 at Washington Heights in Manhattan, USA.

She is the first of two children born of the union between her little known mother and father – Carlos Almanza. Let’s introduce you to Cardi B’s parents.

The celebrity rapper who triples as a songwriter and actress is of Dominican family roots. Added to Cardi B’s family origin is her Trinidadian roots. This makes her an American national of mixed ethnicity.

Do you know that young Cardi B was raised at two locations in New York city? they include the Highbridge neighbourhood of the South Bronx. And her paternal grandmother’s home in Washington Heights. 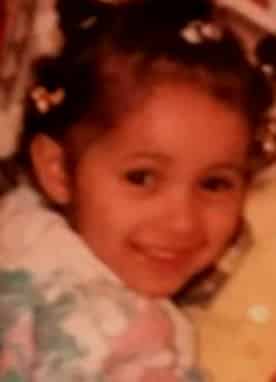 Growing up in a middle-class family setting at both locations, young Cardi B was surrounded by bad multicultural influences which fed her with experiences that she would rap about in a few decades to come.

Cardi B Education and Career Buildup:

One of the few positive influences of Cardi B’s upbringing was Madonna. The veteran singer’s music was of great inspiration to Cardi B who held her in high esteem as a childhood idol. 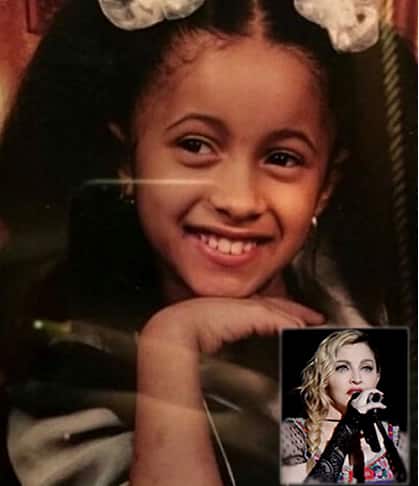 In fact, Cardi B performed Madonna’s ‘Material Girl’ during her freshman year at Renaissance High School for Musical Theater & Technology in New York before a gang membership with the Bloods made her begin the exploration of rap music genre.

By the time the rap prodigy reached her mid-teens, she was employed at an Amish Market in Tribeca where she worked as a Cashier.

Upon being relieved of her job at the supermarket, Cardi B ventured into stripping as a means to escape poverty and to become an independent young lady. 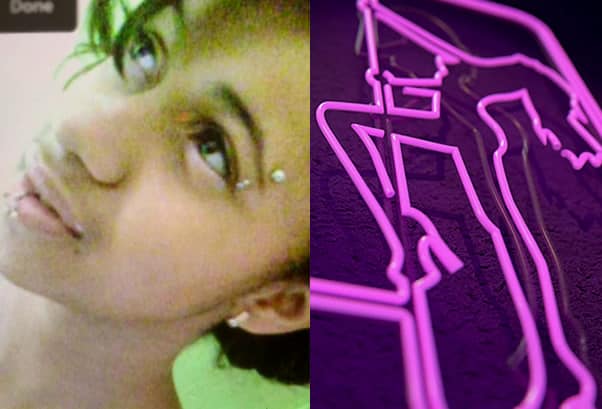 Thanks to the lucrative nature of the stripping business, Cardi B was able to raise enough money which she used to get herself enrolled in the Borough of Manhattan Community College. She studied at the institution for a few semesters before dropping out.

It is said that people have strategies for making it big before fortune eventually smiles on them.

For Cardi B, her strategies include using social media (Vine and Instagram) to openly discuss men, s3x and making money.

Cardi B gathered very huge loyal followings from the endeavour that she stopped stripping and began making money by hosting club events as an Instagram influencer.

Although Cardi B only appeared on the show for two seasons, she became relatively popular for putting up one of the most infamous feuds on the reality show. 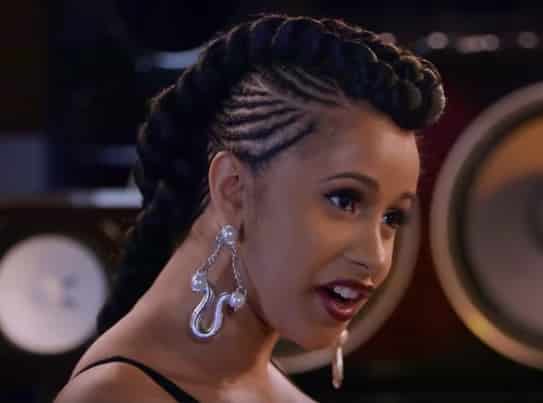 1 and collaborated with other hip hop artists to produce the KSR Group compilation – Underestimated: The Album. 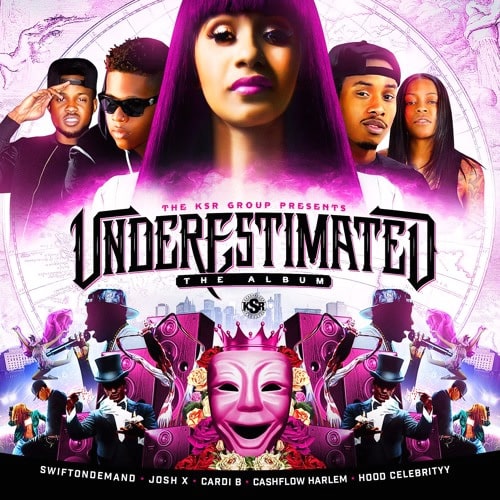 2017 was a turning point year for Cardi B who released her second mixtape, Gangsta B*tch Music, Vol. 2 and also signed a deal with Atlantic Records label.

Atlantic Records went on to release Cardi B’s commercial single “Bodak Yellow” which not only became a viral hit but made her the second female rapper to top the Billboard Hot 100 chart with a solo output.

Although “Bodak Yellow” won the Single of the Year at the 2017 BET Hip Hop Awards, Cardi B was still relatively unknown until she did a few more collaborations, dropped her second single – “Bartier Cardi” and ultimately unveiled her long-awaited debut album, Invasion of Privacy (2018).

The debut album which had hit tracks like “I Like It” and the Maroon 5 collaboration “Girls Like You”, broke numerous streaming records and made her the only woman to have won the Grammy Award for Best Rap Album as a solo artist. The rest, as they say, is history. 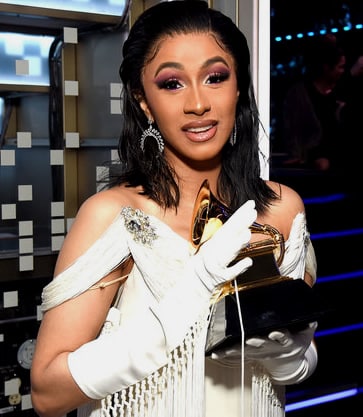 Beyond her Rap career and music engagements, Cardi B has had her fair share of dating stints, marriage, separation and reunion. We bring you facts about the rapper’s love life beginning with her ex-boyfriends.

Sadly, little is known about the gentlemen who were romantically involved with the rapper between the years 2015 – 2016. They are identified as King Yella, Tommy Geez and DJ Self.

In 2017, Cardi B began dating rapper Offset who she met a year earlier.

The lovebirds secretly got married at Georgia in September 2017 and had a daughter together – Kulture Kiari Cephus (born April 2018) before separating in December that year.

However, they have mended fences and reunited as one for the sake of love and giving their daughter the best of a memorable childhood. 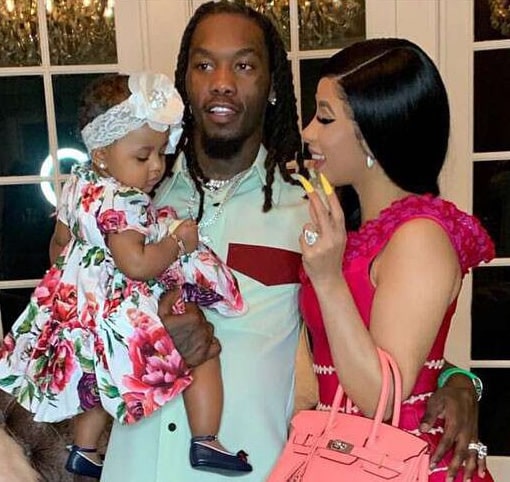 Family is where life started for Cardi B and where loves never end for the rapper. We bring you facts about the rapper’s family background beginning with her parents.

Carlos Almanzar is Cardi B’s dad. He is of Dominican family origin and worked as a Taxi driver for a very long time.

Carlos got separated from Cardi B’s mom when the rapper was aged 10 but nonetheless, stayed within reach to remind his daughters that he still exists.

Cardi B has no perfect relationship with Carlos but credits him for being an open and good man. 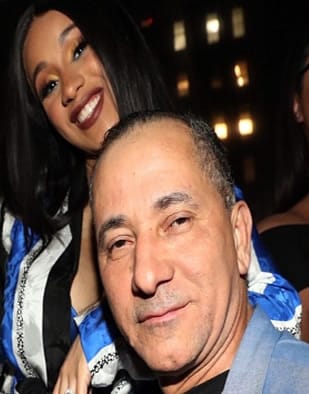 Cardi B’s mother is probably known for everything except her name. She is of Trinidadian family roots and helped raised the rapper in a strict manner.

The mother of two wasn’t even aware of Cardi B’s stripping endeavours because the rapper kept it as a secret from her disciplinarian mom.

These days Cardi B hides nothing from her mother who has learned to appreciate the rapper’s candour. 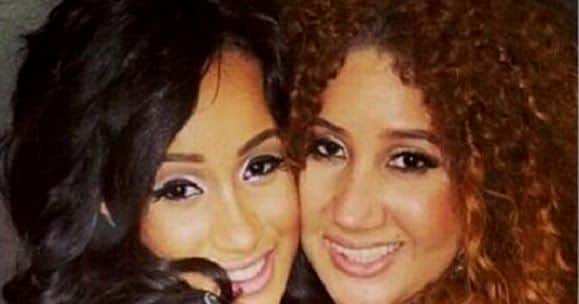 Cardi B has no biological brother but a blood sister identified as Hennessy Carolina Almánzar. Hennessy is a television and social media personality who has interests in fashion designing and styling.

What more? Hennessy grew up alongside her celebrity sister and attend the same high school. She went on to appear with Cardi B on Love & Hip Hop reality television franchise. It goes without saying that both siblings love and appreciate each other. 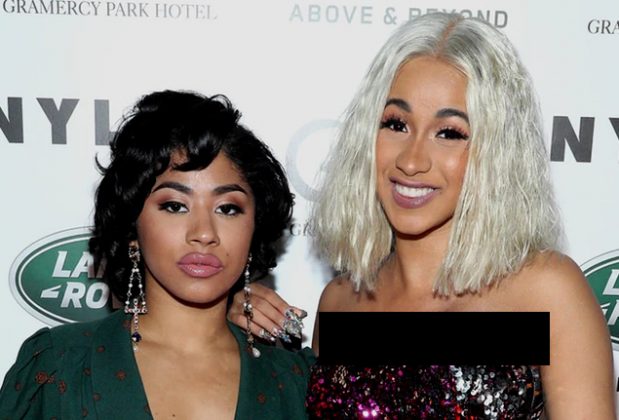 There are no records of the rappers paternal grandparents as well as maternal grandfather and grandmother.

Similarly not much is known about Cardi B’s uncles, aunts and cousins while her nieces and cousins are yet to be identified at the time of writing this biography.

Yes, Cardi B has great looks that court attention, it is her personality that captures the hearts of her fans.

Traits of Cardi B’s charming persona which take their origin from Libra zodiac traits include her frankness, exhibition of undying resilience and creative approach to solving problems.

Speak of the rapper’s interests and hobbies, she loves travelling, partying. Also, dancing, keeping up with television shows. Again, strengthing her social and business networks as well as spending good time with people who matter like her friends and supportive family. 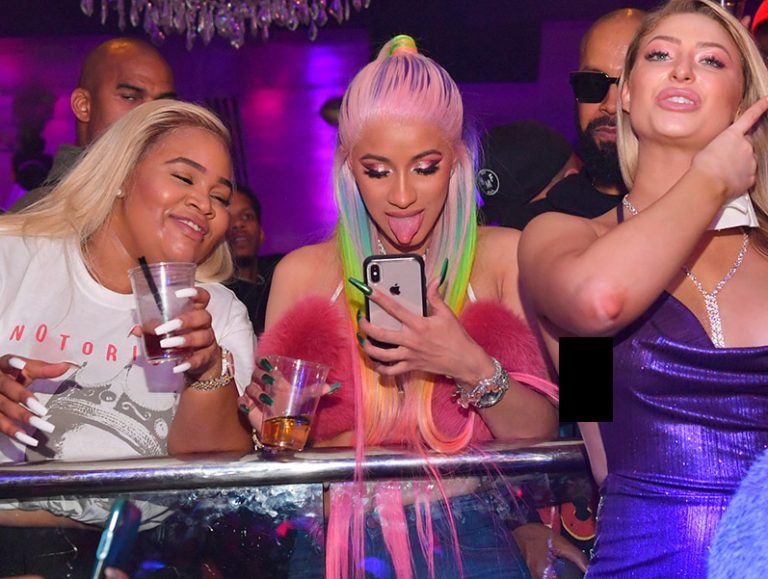 Regarding how Cardi B makes and spends her money, she has an estimated net worth of $12 million at the time of writing this bio.

Cardi B’s fast-rising wealth has its source established in her music endeavours. While endorsements and other ventures like her clothing line collection help her to afford luxuries alien to most earners of salaries and wages.

It is therefore not surprising that she possesses exotic cars. Including a Bently Bentayga as well as a multi-million dollar beautiful house at Atlanta.

The mansion which is flanked by tall trees is definitely worth every penny spent in its acquisition as Cardi never ceases to talk enthusiastically about it. 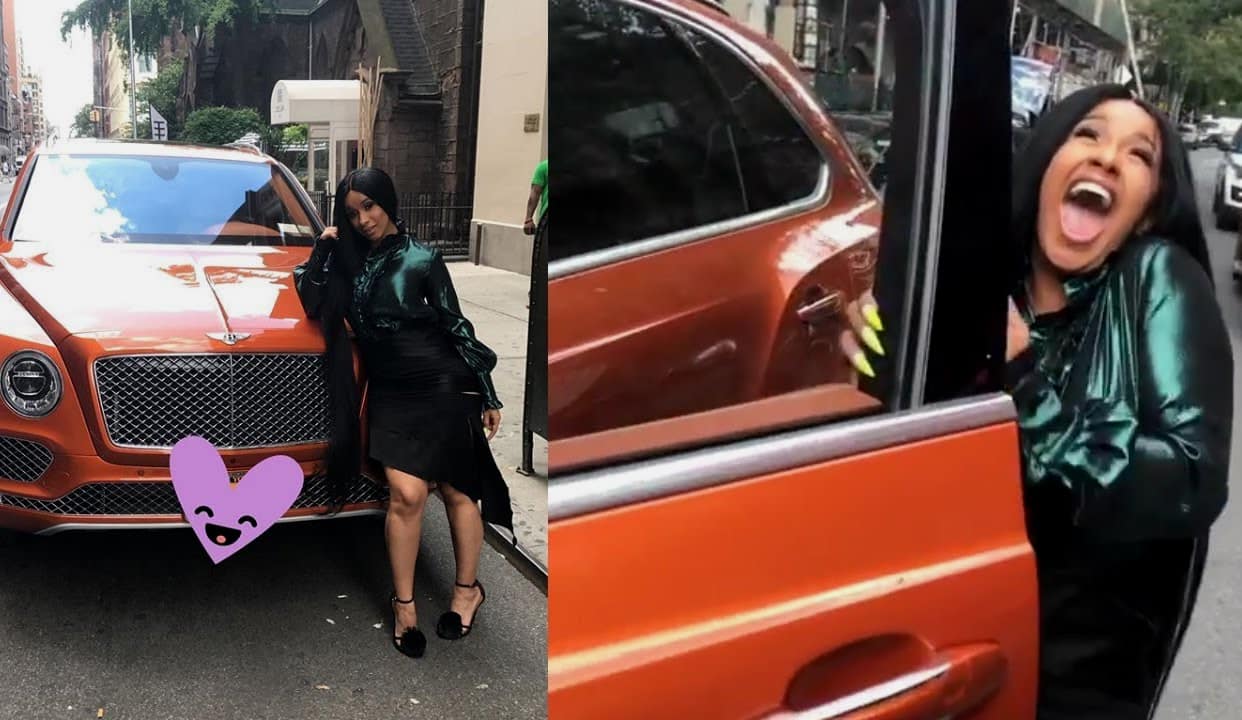 To wrap up our Cardi B childhood story and biography, we present some truth about her.

Rise above her musical styled utterances, Cardi B is Catholic. She confesses to having a “strong relationship” with God as well as notes that she directly communicates with Him.

Cardi B used to smoke as a teenager before she kicked the habit. She now advises young girls to stay away from smoking. However, she is given to moderate drinking of alcohol. 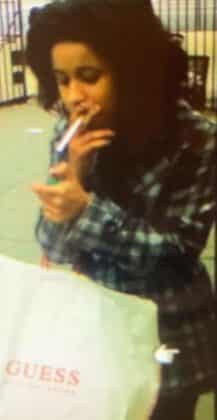 The rapper’s professional name – Cardi B is short for her former nickname “Bercadi”. This name is shortened the nick to “Cardi” and added a “B” for rhyme’s sake.

Cardi B – with an impressive height of 5′ 3″ feet – has beautiful tattoos evenly spread from her head to tattoo. The body arts which are no fewer than 8 can only be spotted when she performs in bodysuits and leotards. 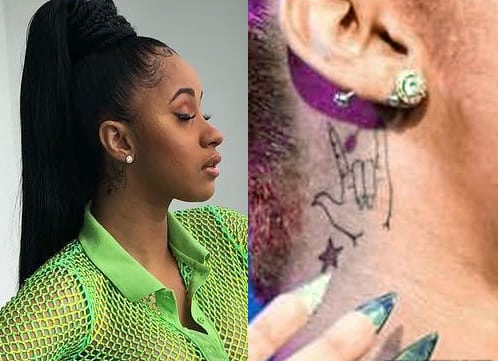 Cardi B has interests in politics particularly in the aspect of the US presidency. She loves reading biographies about the presidents and pondering on the sacrifices they made to make America great.

Thanks for reading our Cardi B Childhood Story plus untold biography facts. At childhood biography, we strive for accuracy and fairness as we deliver you the Biography of World Famous Singers. The Childhood stories of Charlie Puth, Camila Cabello, and Olivia Rodrigo might interest you.