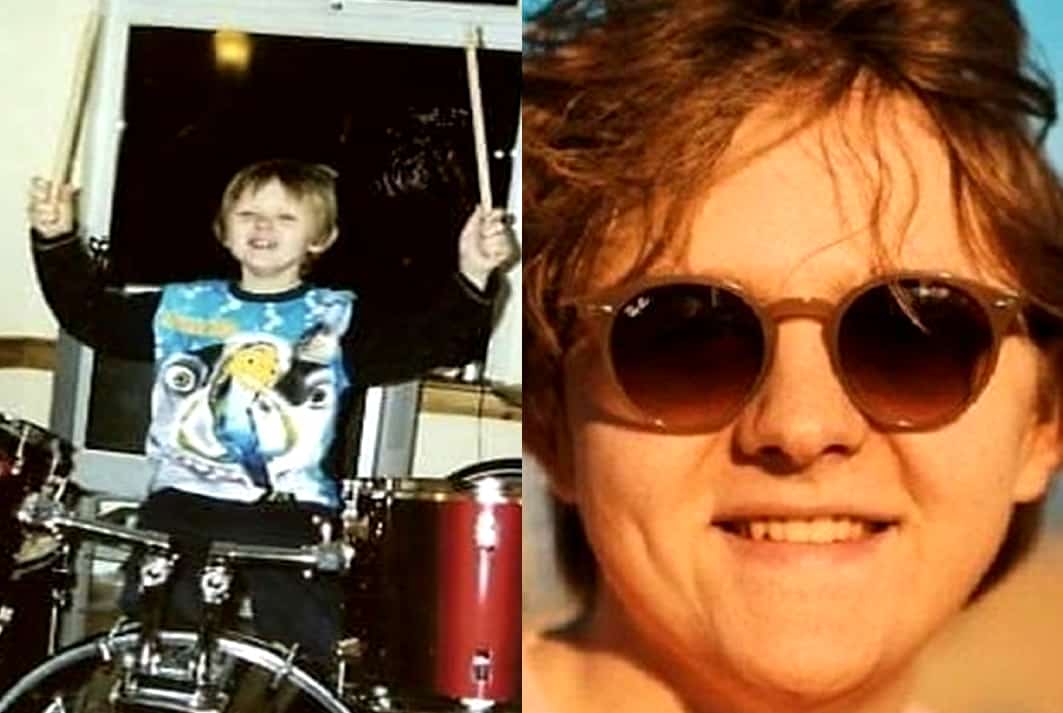 Childhood Biography presents the Full Story of a Scottish Celebrity with the nickname “American Sweetheart“.

Our Lewis Capaldi Childhood Story plus Untold Biography Facts brings you a full account of notable events from his childhood time to date.

Yes, everyone knows about his melodic voice that has captured many hearts in the world. However, only a few consider Lewis Capaldi’s biography, which is quite interesting. Now, without further ado, let’s begin.

For Biography starters, Lewis Marc Capaldi was born on the 7th day of October 1996 in the Port city of Glasgow, Scotland.

The Scottish singer-songwriter was born as the youngest of four children to his parents, his dad Mark, and mum Carol Capaldi.

Although most fans think Lewis Capaldi has only Scottish Family Origin. Truth is, he also has Italian family roots thanks to one of his parents.

Lewis Capaldi was brought up in a middle-class family background of average income earning parents. His parents, starting with his dad was a fishmonger while his mum, a nurse.

Together, both parents used their middle-class income to take care of their children. Lewis Capaldi grew up a happy kid under the tutelage of his supportive parents. 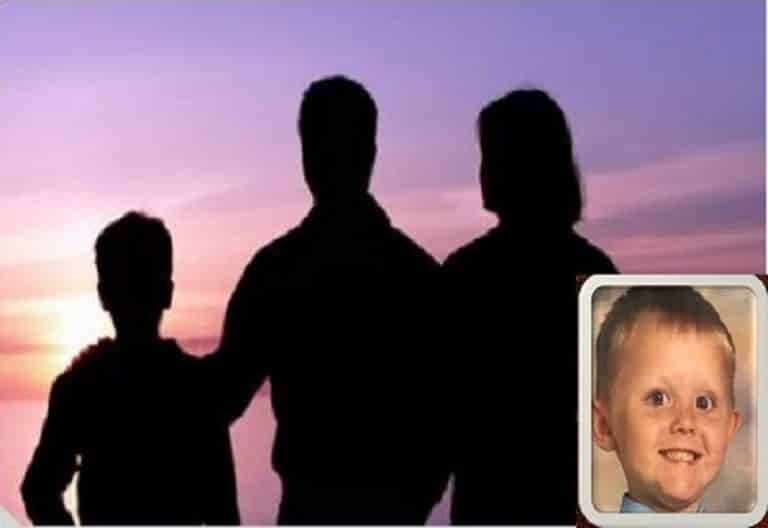 Capaldi’s early life saw him having a date with his destiny. At the tender age of 2, little Lewis was already being educated on how to play drums and guitar.

The exciting kid then found his love for music at the age of 4 when he had his first performance at a holiday camp.

Having supportive parents, it was easy for little Lewis to never get grounded when he played the drums all day.

Unlike his older brothers and sister, the last-born child (the baby of the house) went through his school without focusing much on academics.

What Lewis did while at School: While at school, Lewis was less of a serious student as regards his devotion to his books.

At school, he acted more like a comedian who would sometimes amuse his classmates with pranks and comedy skits.

He was a pupil who preferred using his free time and breaks to play musical instruments rather than devoting time to academia.

Taking what he Loved as his Job: Away from school, Lewis spent his formative years writing original tracks and playing the guitar.

By the time he was 11, his love of music and dream to have live performances saw him taking his music hobby as his job.

Forging ahead, Lewis took whatever opportunity he had to get popular even though it means remixing other bands’ songs which he did very well to the amusement of his few fans.

He hustled his way through playing at various venues around Bathgate, Glasgow, and Edinburgh, only doing what he knew how to do best. 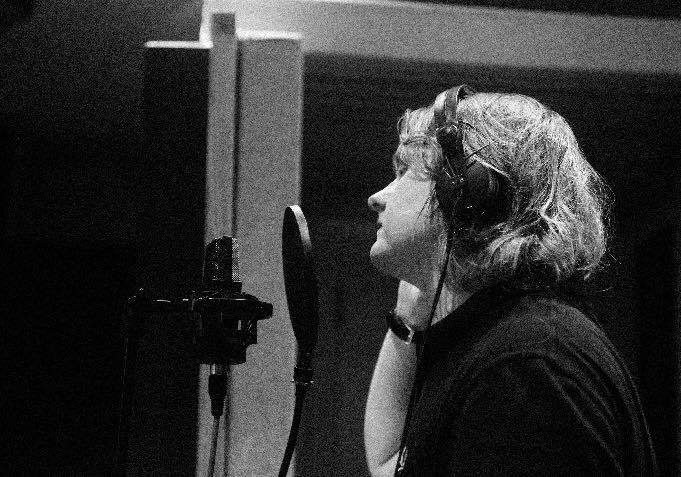 At the age of 17, Lewis had already committed his life to music, abandoning his education in the process.

Juggling his way up, he began to make frequent music voice notes with his iPhone in his bedroom.

After each production, he would then make uploads to his SoundCloud account.

Did you know?… It was through the SoundCloud platform that Lewis Capaldi was discovered by his manager Ryan Walter.

The turning point to Lewis Capaldi’s music career came when he released the track Bruises on March 31, 2017. 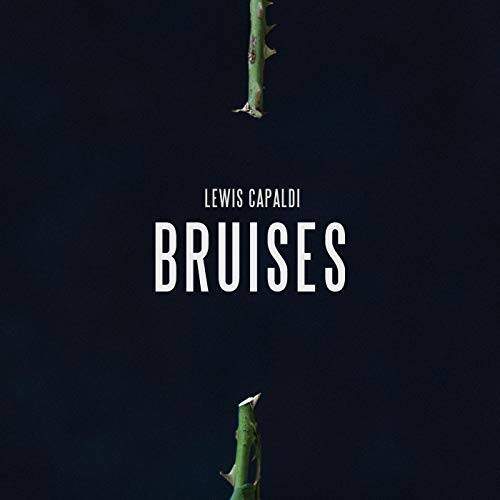 The success of Bruises paved for his signature with Virgin EMI Records and Capitol Records. In his quest to achieve greater heights, Lewis Capaldi never relented.

He released his debut extended play recording “Bloom” on 20 October 2017. At this time, he knew he was going to become famous.

Lewis opened 2019 with his breakthrough single “Someone You Loved” which charting in over 29 countries around the world becoming a hit all over Europe, Asia, and Australia.

The song spent seven weeks as number one on the UK Singles Chart hitting more than 83 million views on YouTube. 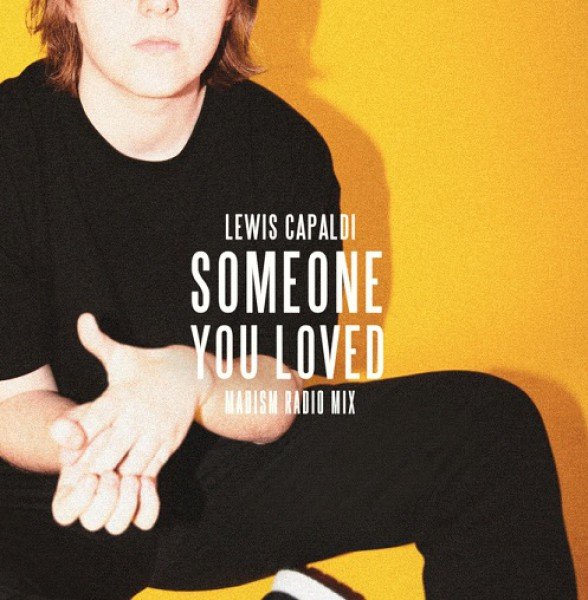 Lewis cemented his status as one of the biggest rising music stars in the world with the release of his debut album “Divinely Uninspired to a Hellish Extent” on May 17, 2019.

The album became the best-selling album in the UK. The album also achieved gold status in the UK only two weeks after release. 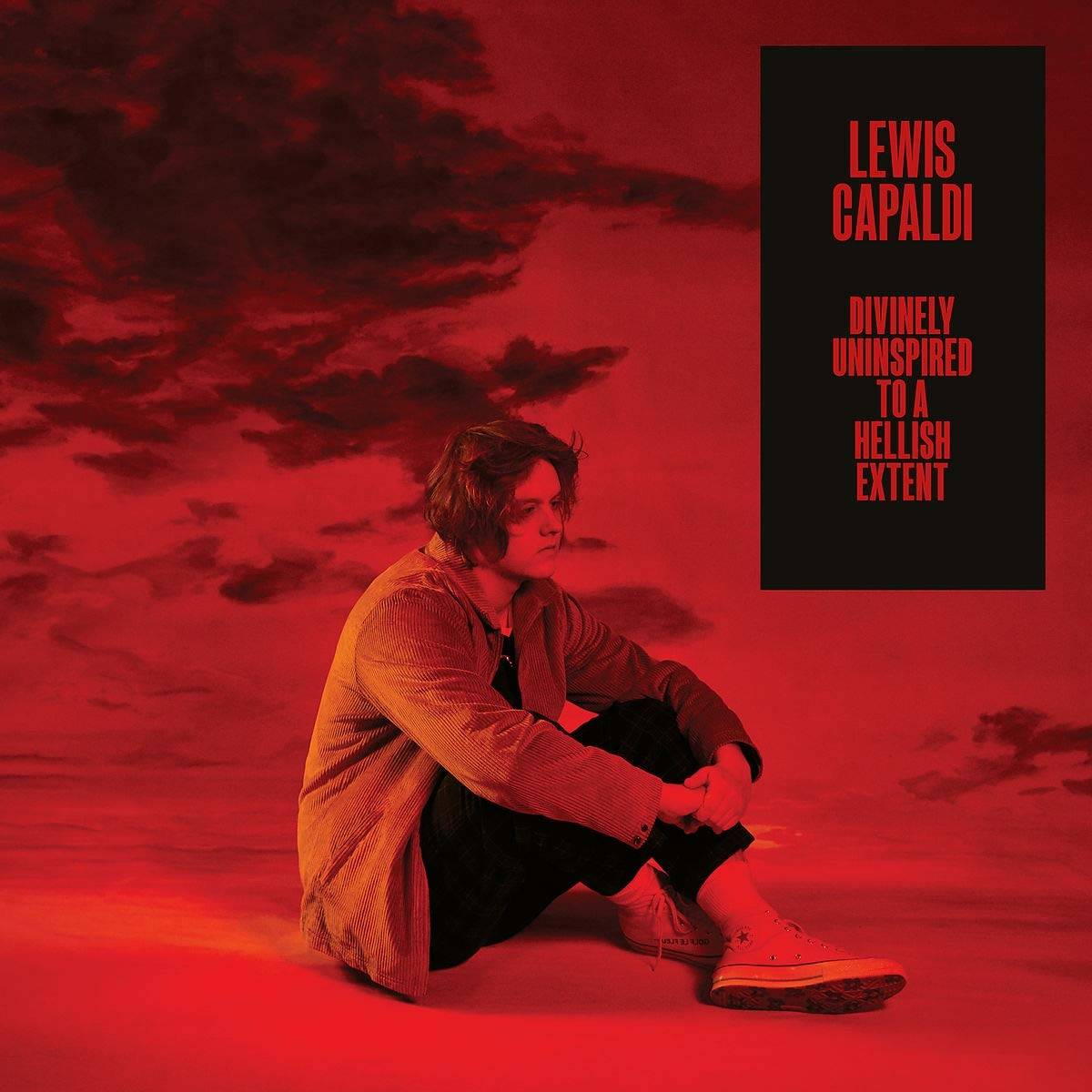 Fast forward to date, Lewis Capaldi at the time of writing has made history by becoming the first-ever artist in global music history to both announce and sell out an arena tour before the release of his album.

It’s fairly remarkable how quickly Lewis Capaldi’s career has blossomed and gained international attention. The rest, as we say, is now history.

With his rise to fame, lots of fans must have pondered if Lewis Capaldi has a girlfriend or if he is actually married, meaning if he has a wife.

Behind the successful music star, there was once a glamorous girlfriend. Some time ago, Lewis was romantically linked with Paige Turley.

Lewis Capaldi and his ex-girlfriend Paige started dating while they were at college in Motherwell, Scotland.

Paige Turley, like her boyfriend, is also a singer. She once performed in a pop band called G-Side. Paige also had her own taste of fame when she appeared on Britain’s Got Talent in 2012.

Did you know?… Paige was just 14 years old when she auditioned for the famous show of which she impressed the judges. 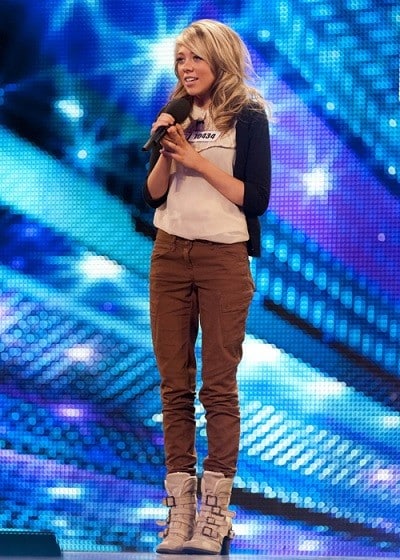 Sadly, after some years of being together, the duo finally called off their relationship in 2017. According to The Scottish Sun, it was Paige who inspired Lewis Capaldi’s number one hit single “Someone You Loved”. In the emotional words of Lewis;

In this section, we give you more insight into Lewis Capaldi’s family members starting from his parents.

As mentioned earlier, Lewis Capaldi’s dad is a fishmonger and his mum is a nurse. Both were the kind of parents who didn’t believe in forcing their jobs on their kids. Instead, they allow them to forge their own career parts.

Today, Lewis Capaldi’s dad and mum- Mark and Carol are currently enjoying all the benefits of having him forge their family’s own part towards total financial independence.

As mentioned earlier, Lewis Capaldi has two older brothers and a younger sister. One of his older brothers named Warren Capaldi is also in the music business.

Warren Capaldi’s music style has been described as very similar to his brother Lewis.

At the time of writing, Warren writes his own music and has taken a step back from singing in public. Warren Capaldi’s last video on his YouTube channel was uploaded back in April 2015. 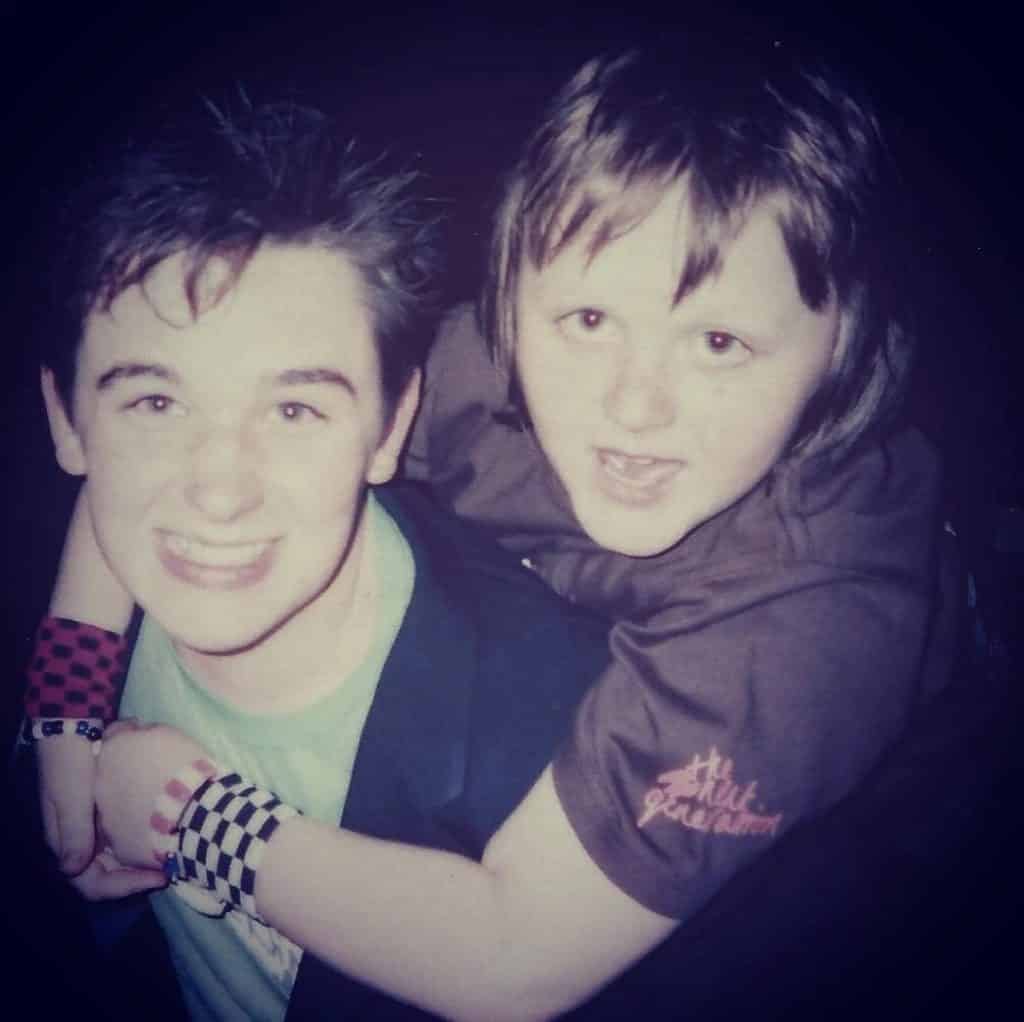 Peter Capaldi is Lewis’ dad’s second cousin. Did you know?… Peter was an actor in the popular BBC science fiction television program “Doctor Who Series”.

Peter Capaldi became famous for playing the twelfth incarnation of Doctor Who, as well as starring in BBC’s The Thick of It and the Paddington films.

Getting to know Lewis Capaldi Personal Life will help you get a better picture of him. Starting off, He is someone always ready to do nearly anything to avoid conflict among his peers.

Lewis is known for being a peacemaker and loves to have his fans around him without showing any ego. Lewis Capaldi’s Personal life attributes can be traced to the Libra Zodiac Trait. 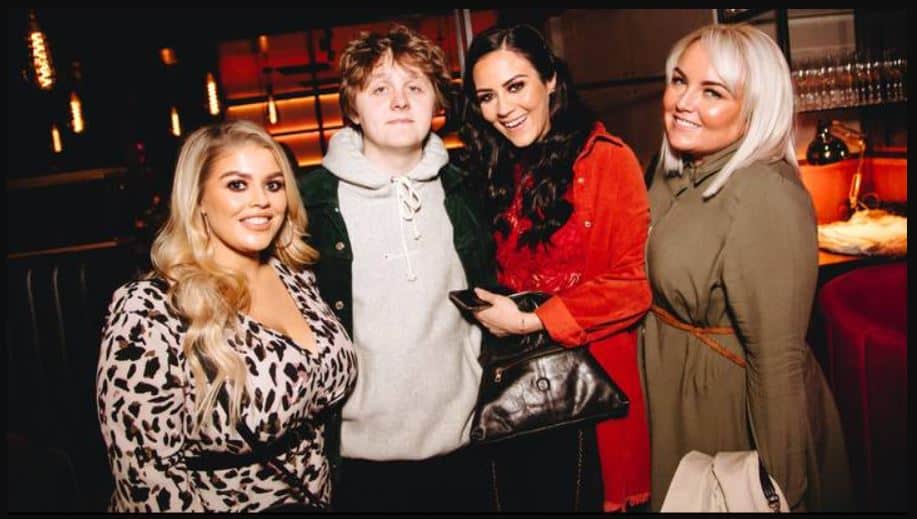 Also on his personal life away from singing, Lewis Capaldi has a philanthropic nature built inside him. He is naturally drawn to NGO initiatives that focus on organ donation.

Lewis played a huge role in the Save9Lives Project set up by Jim Lynskey with the purpose of raising awareness on the importance of organ donation. 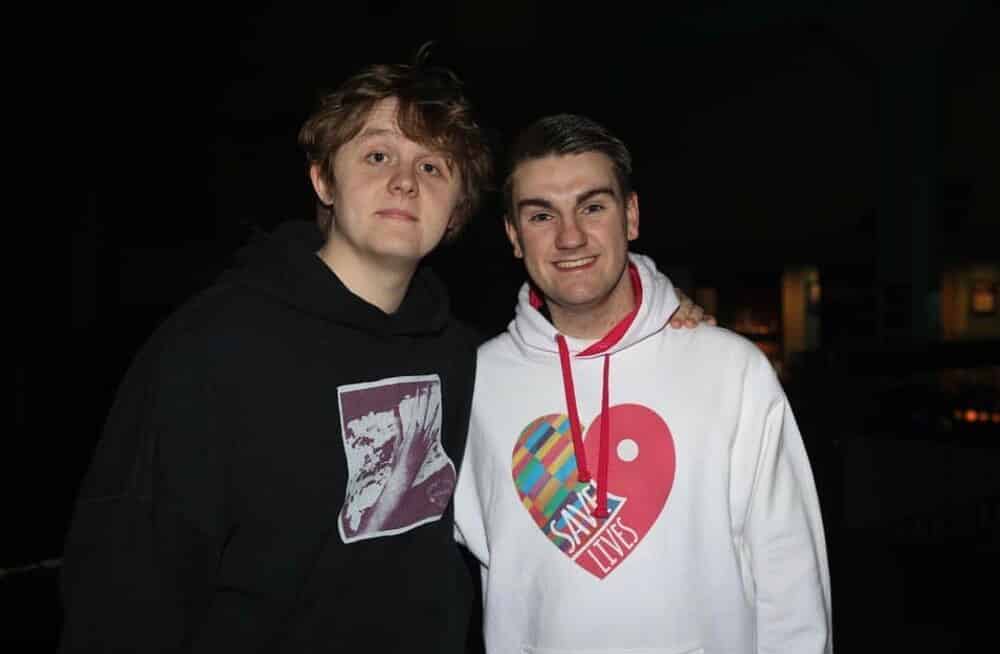 Did you know?… The message in the “Some One You Loved” video was part of Lewis’s effort to promote the organ donation charity “Live Life Give Life”.

Thirdly on Lewis Capaldi’s personal life, the Scottish singer-songwriter loves the idea of sometimes experiencing the life of an ordinary citizen. He once thrilled fans by going undercover to serve in a Greggs bakery.

Lewis wore the full Greggs uniform, including hairnet while claiming to be on industrial attachment.

The bakery’s Workers felt so trilled seeing a humble celebrity of his kind serving up breakfasts, coffees and sandwiches. 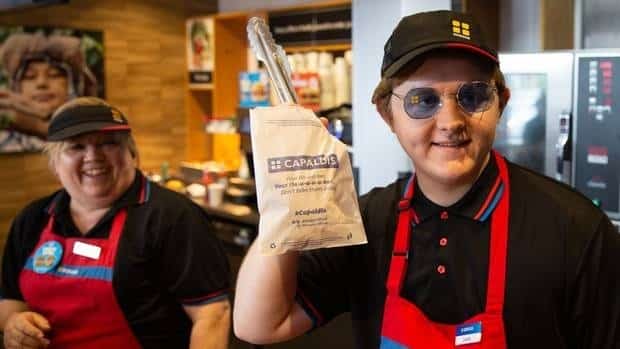 Lastly, on Lewis Capaldi’s personal life, he is a funny person despite ‘comedy’ not being his profession. Lewis has a hobby of sharing humorous posts on social media, especially on Twitter and Instagram. 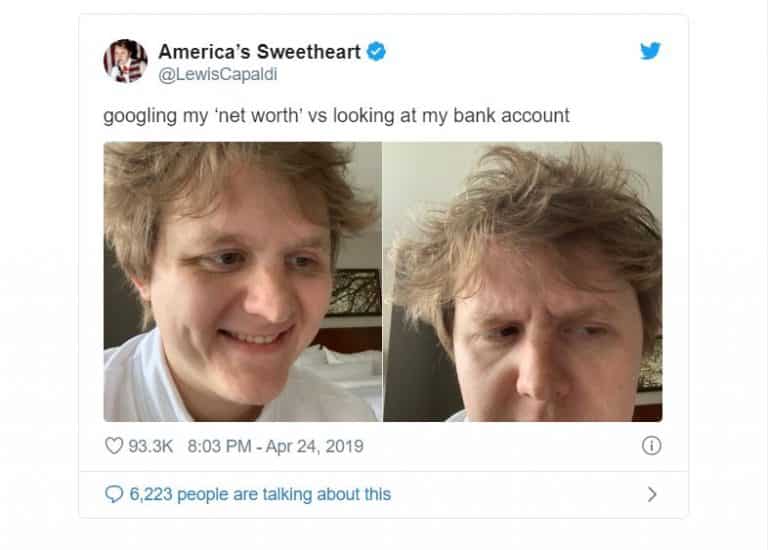 Capaldi has an estimated net worth $10 million. He reached this net worth figure at the time his singles “Someone You Loved” reached number one in the UK Singles Chart.

Despite this huge net worth, Lewis Capaldi is an antidote to expensive living. This is happening in a world where musicians are hardly seen without flashy cars and them showcasing their big mansions.

As at the time of writing, Lewis Capaldi still hasn’t moved out of his parents’ house despite making a whopping pile of cash.

Why is this the case?… it’s because the Scottish singer claims he has something more important to spend his money on.

Lewis Capaldi was raised in a Christian home. This implies he is a Christian by religion. Living the life of a believer and was once attributed to one of his songs titled ‘Grace’.

However, at the time of writing, Lewis, unlike Kanye West, is not fully devoted to Christianity cause.

As at the time of writing, Lewis doesn’t believe in the Tattoo culture meaning he is ink-free. Although, he’s got a number of fans having tattoos of him on their bodies. 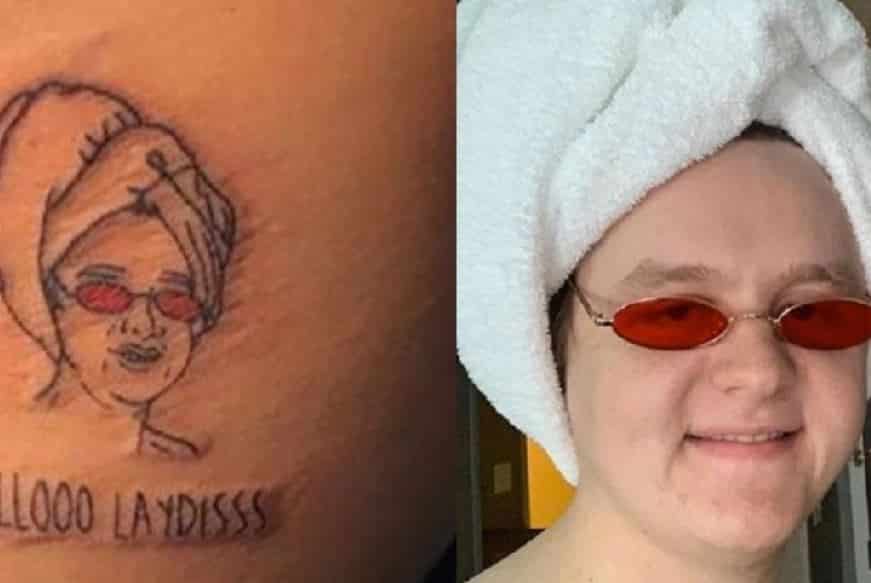 After detailed research, we observe that the Scottish Singer doesn’t smoke. Although Lewis drinks occasionally. 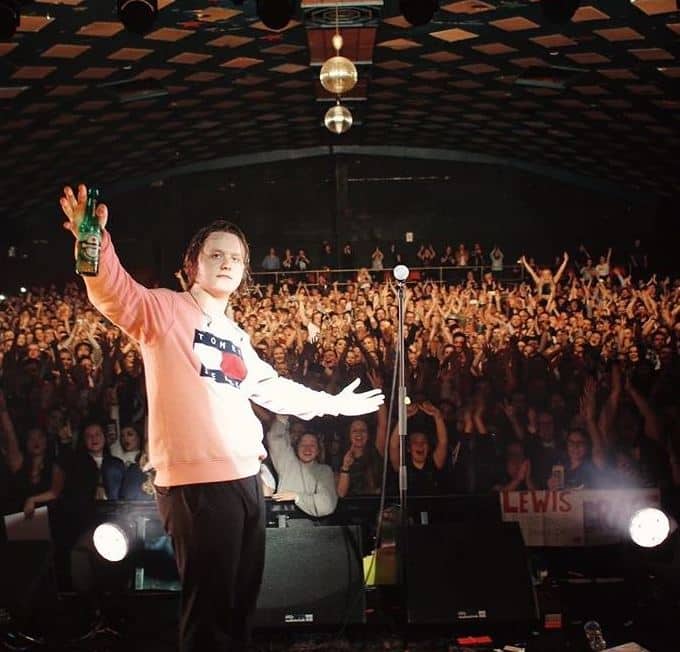 About His Nick Name America’s Sweetheart:

Lewis Capaldi’s nickname came after a gig, a time when fans started screaming American Sweetheart and making videos and tagging him.

Thanks for reading our Lewis Capaldi Childhood Story plus untold Biography Facts. At ChildhoodBiography, we strive for accuracy and fairness. If you see something that doesn’t look right in this article, please place your comment or contact us!