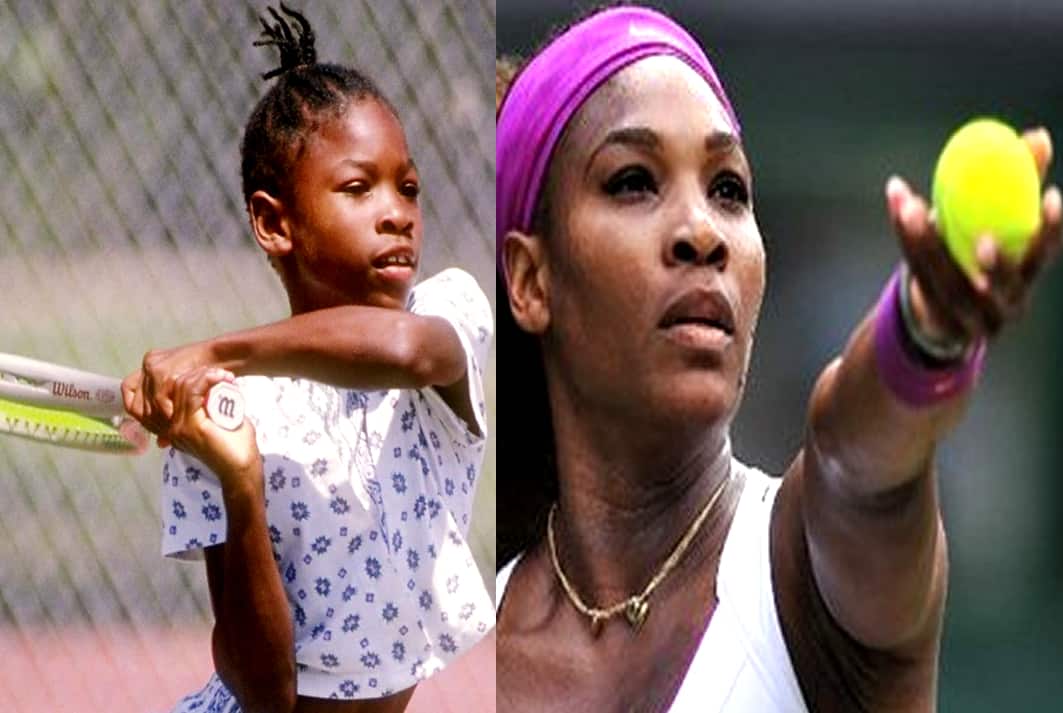 Childhood Biography presents the Full Story of a Tennis Genius. She is best known by the nickname “Momma Smash“.

Our Serena Williams Childhood Story plus Untold Biography Facts brings you a lot. We present you a full account of notable events from her childhood time to date.

The analysis involves her life story before fame, family life/background. And many OFF and ON-Screen little-known facts about her.

Yes, everyone knows about her fierce tenacity on the tennis court. However, only a few consider Serena Williams’ Biography which is quite interesting. Now, without further ado, let’s begin.

Serena Williams Childhood Story – The Man Who Decided The Future for His Daughter.

For Biography starters, Serena Jameka Williams was born on the 26th day of September 1981. Her Birth Place is Saginaw, Michigan, United States.

Baby Serena is pictured below with her sister Venus. She was born to her father, Richard Williams. Richard, her Dad is an avid fan of televised Tennis and ran a private security firm. And to her mother, Oracene Price (a nurse at the time of Serena’s birth).

Years before Serena was born, her father Richard Williams (pictured below) had a dream. He had envisaged a future for her in tennis.

It came after viewing a televised match. A match that saw a tennis player take home a huge amount of money for winning the contest.

Richard consequently taught himself the sport and drafted a 78-page plan, which he believed could develop anyone from being inexperienced to a professional tennis player.

Months after Serena was born, her family moved from the serene atmosphere of her birthplace in Saginaw to the restive town of Compton in Los Angeles where violence was the order of the day to practice Tennis in harsh weather.

The move which was not motivated by dwindling finances was in line with the notion of separate to operate which in other words means leaving one’s comfort zone for the sole purpose of lasting development.

It was at Compton that Richard Williams taught Serena the basics of Tennis in weird tennis courts amidst the occasional sounds of raging gunfires in adjacent neighbourhoods. 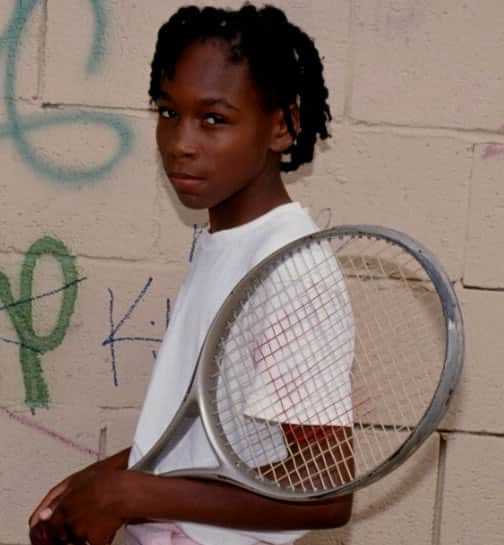 “We get to the courts, and it’s not a country club. It’s a crummy park. There are guys playing basketball, people passed out in the grass, broken glass all over the courts, people drinking beer.”

Nevertheless, Serena was a quick learner and showed significant progress in her early months of training, a development that made her father take the next bold step in his quest to make her a professional tennis star.

Young Serena started participating in Junior Tournaments at the tender age of four and a half years.

While in Junior Tournament, She was coached by her father and put up an impressive form that saw her win forty-six of the next forty-nine tournaments she entered within the space of five years. 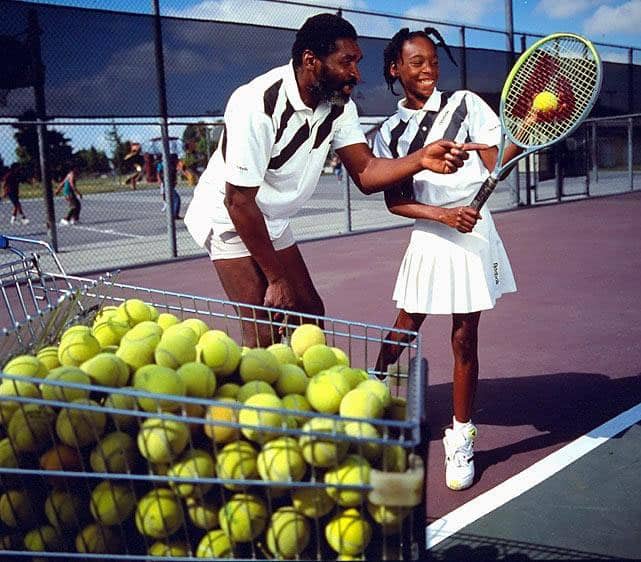 Her achievements in the Junior tournaments did not only fetch her local popularity but made her witness racial hostility which her father, Richard was not happy about knowing that Serena could become physically and emotionally worn out if she continued in Junior tournaments characterized by unprofessionalism and racism at the time. 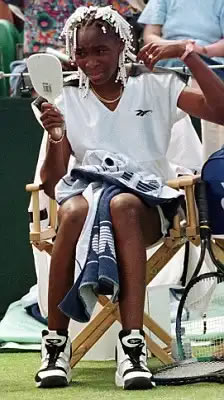 He, therefore, withdrew Serena out of the competitions and secured the services of a professional tennis coach, Rick Massi to train Serena at home.

It wasn’t long before Coach Rick Massi realized that Serena was a star in the making and invited the Williams family to Florida where he ran a tennis academy.

Thanks to proceeds from the clothing endorsement contract for Serena, the family had no difficulty in securing an apartment as they both one shortly after relocation.

The family’s move to Florida turned out to be a catalyst for Serena’s rise to stardom as she had her first professional game at the age of 14, was ranked #96 best tennis player in the world at age 16 years! in 1998 signed a $12 million shoe deal with Puma shortly after her graduation from high school!. The rest, as they say, is history. 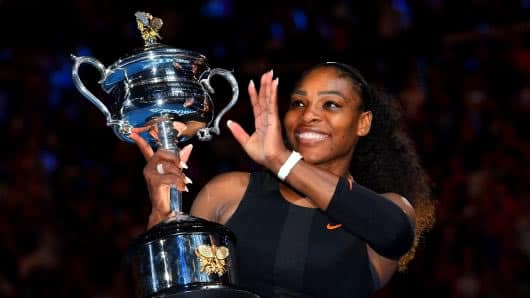 Serena Williams, though quite secretive about her relationships and keeping a very private personal life, has been known to have dated a number of guys, especially through her rise to stardom.

Over the course of her dating spree, Serena Williams dated Patrick Mouratoglou, her current Tennis coach. Rapper Drake was also involved in some romantic stint with Serena but it was short-lived.

After 15 months of secret dating, Serena Williams got engaged on the 10th of December 2016 with Alexis Kerry Ohanian, an American Internet entrepreneur, and investor who co-founded and is currently executive chairman of the social website Reddit. 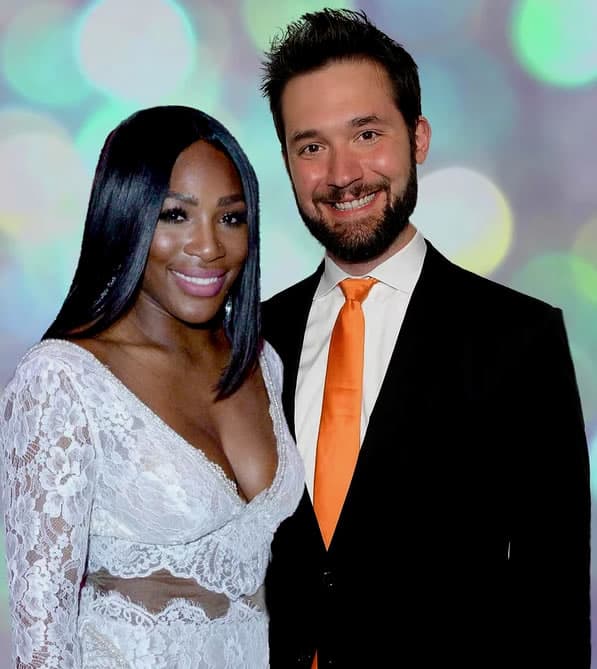 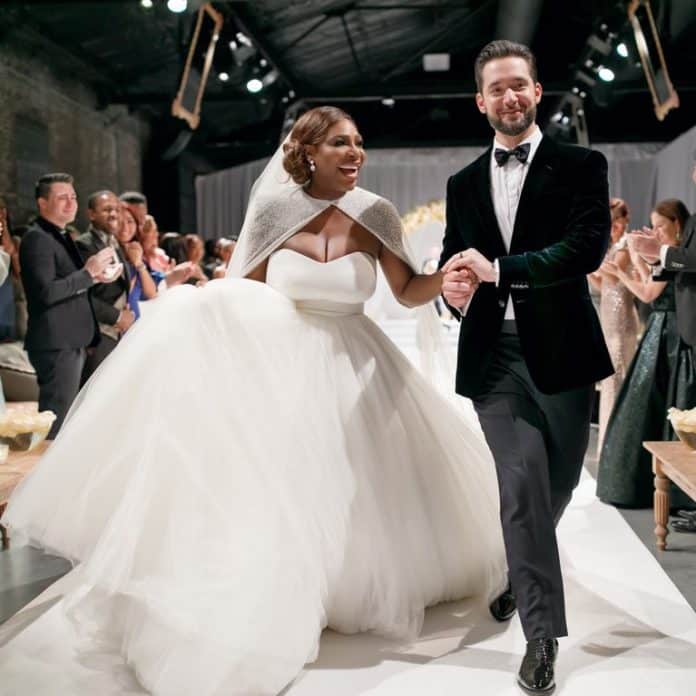 Their union is blessed with a child, Alexis Olympia Ohanian Jr., who was born on September 1, 2017. Months before Serena’s Wedding. 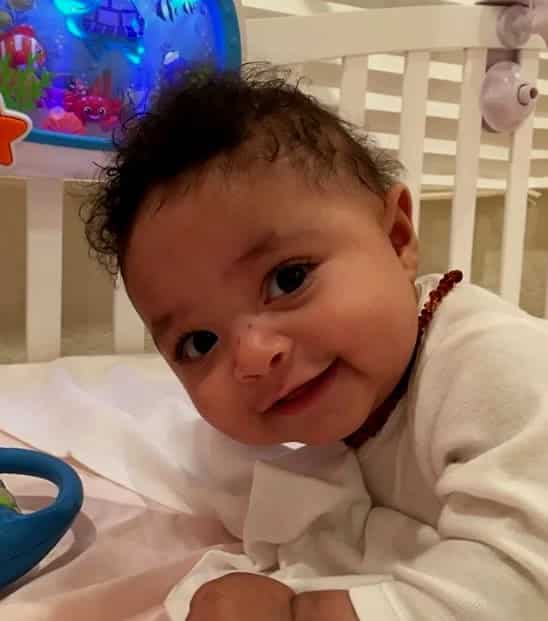 Father: The achievements and successes recorded by the Williams sisters, especially Serena Williams can be attributed to Richard Williams.

As a father and a coach, Richard, with his age-long experience in tennis saw the potential in his Serena, taught her the sport, and built the very foundation that would see her become a world record holder. 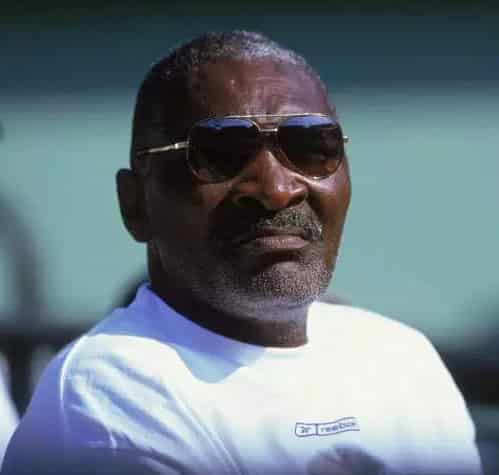 Mother: More than being just a mother to Serena, Oracene Price, also known as, Brandy Price was a former tennis player turned coach who contributed to building Serena Williams’ tennis skills. She separated from Richard in 2002 over allegations of domestic violence. 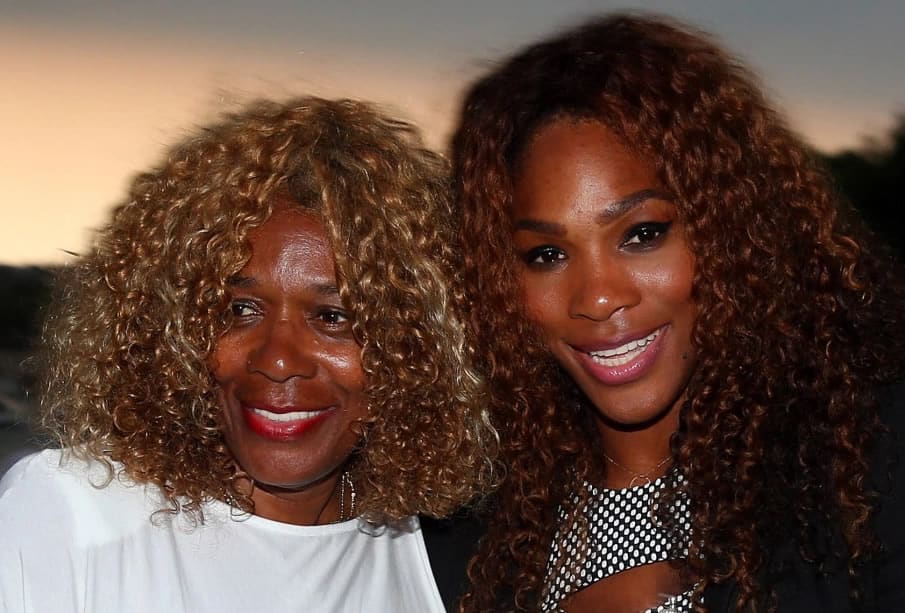 Sisters: Venus Williams is the immediate elder sister of Serena, she is also a tennis star. She started her Tennis career together with Serena and they’ve been through the thick and thin of their careers together since time immemorial. 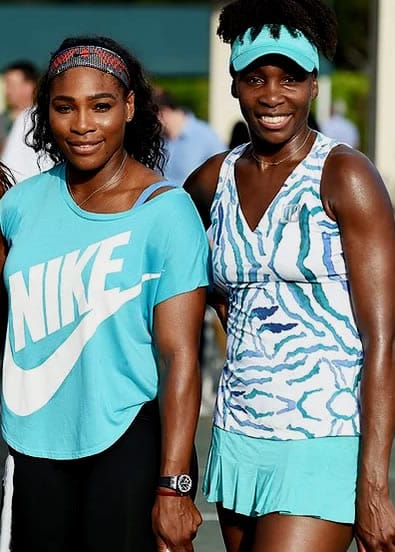 Yetunde Price, aged 31, is one of Serena’s half-sisters. She died on the 14th of September 2003 from gunshot wounds sustained due to Drive-by Shooting in the United States.

She was, before her death, the Personal Assistant to both Serena and Venus, a registered nurse as well as a beauty salon owner. 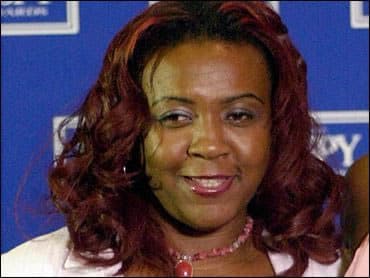 Think of a successful lady who has a hand in every pie and you might not be far from figuring the life of Serena Williams outside tennis.

Aside from featuring in a number of movies and Tv shows including Hair Show (Movie) Agent Ross 2004 Street Time (TV Show). she has appeared in numerous commercials and music videos.

In addition, she has a signature collection of jewelry and bags sold on the home shopping network HSN.

What’s more? she is a minority owner of the Miami Dolphins NFL team and the UFC and a promoter of several brands also known as brand ambassadors.

Even as a kid, Serena was built. She was so muscular. She didn’t have to do a lot of work to get that physique. It was an anomaly that she was gifted at 3 years old to have that body. I remember thinking, wait till they get a load of you.

“I almost died after giving birth to my daughter, Olympia. First, my C-section wound popped open due to the intense coughing I endured as a result of the embolism. I returned to surgery, where the doctors found a large hematoma, a swelling of clotted blood, in my abdomen. And then I returned to the operating room for a procedure that prevents clots from travelling to my lungs.”

Fact Check: Thanks for reading our Serena Williams Childhood Story plus untold biography facts. At ChildhoodBiography, we strive for accuracy and fairness. If you see something that doesn’t look right in this article, please place your comment or contact us!