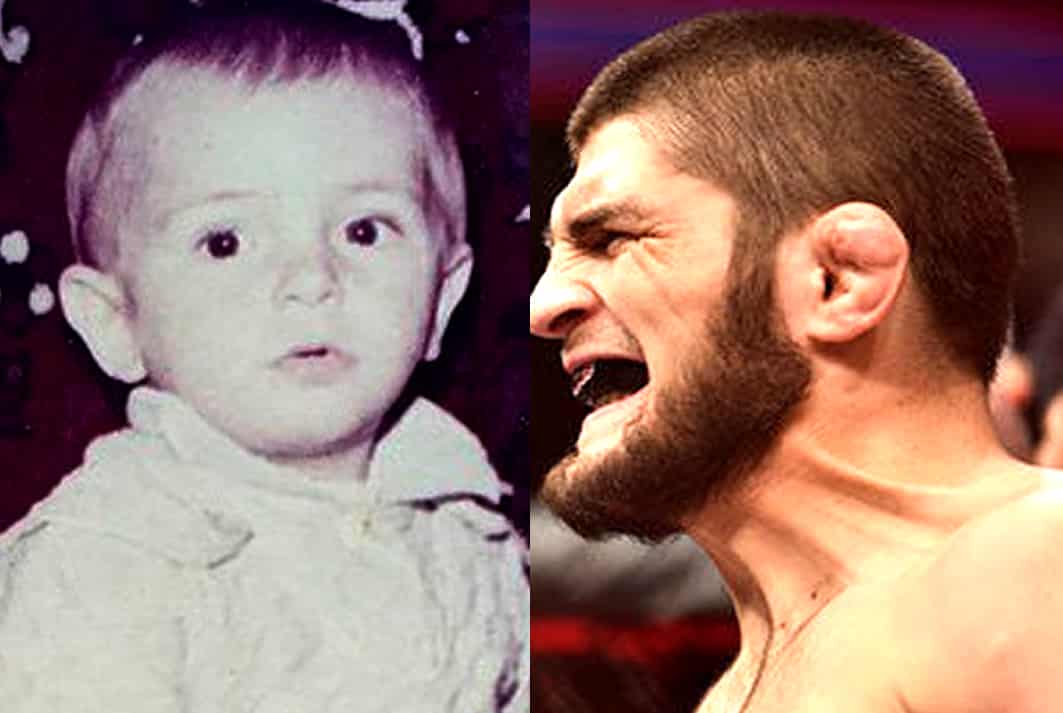 Childhood Biography presents the Story of a UFC Fighter nicknamed “The Eagle”.

It is a coverage of Khabib Nurmagomedov Childhood Story, Biography, Parents, Family facts, early life experience, and other notable events right from his childhood time to when he became a Hero.

Yes, everyone knows he was a terrifying lightweight contender in the world – during his time. However, only a few consider Khabib Nurmagomedov’s quite interesting biography. Now, without further ado, let’s begin.

For Biography starters, Khabib Abdulmanapovich Nurmagomedov was born on the 20th day of September 1988 at Sildi in Russia.

He is the second of three children born to his mother, Fatima, and to his father, Abdulmanap Nurmagomedov.

The mixed martial artist is of Russian nationality with the Avar Dagestani ethnicity and Western European family origins.

He was raised at Kirovaul rural locality in Russia, where he grew up alongside cousins, his older brother – Magomed Nurmagomedov, and his younger sister Amina.

Growing up in a middle-class family background setting at Kirovaul rural locality, young Nurmagomedov was an overly-energetic kid whose hyperactivity found expressions in the art of constituting nuisances at home and in the neighbourhood.

“Khabib had a very active childhood, I’d say hyperactive. He was always climbing trees, jumping over into neighbours’ yards and all of that. He was always on the move”.

By the time Nurmagomedov was aged 8, he had already developed a passionate interest in martial arts.

Thanks to watching his dad train students on the ground floor of their two-story building, which was converted into a gym.

However, Nurmagomedov’s was made to begin with wrestling as it was common with most kids of Kirovaul rural locality.

Coached by his father, Nurmagomedov recorded leaps and bounds in the sport and even wrestled with a bear when he was aged 9.

Nurmagomedov went on to begin training in Judo when he was aged 15, a shift which the fighting prodigy found challenging but had no choice because his father deemed it necessary that he learned how to fight in a gi jacket.

It wasn’t long before Nurmagomedov’s father also trained the then 17-year-old in Combat Sambo and gave him free rein to engage in street fights.

Upon engaging in a number of street fights, Nurmagomedov had courage in his convictions that mixed martial arts was the combat sport that he would love to compete in on a professional level.

Thus, when the time was right Nurmagomedov made his MMA debut in 2008 and recorded 4 wins in one month! In the ensuing three years, Nurmagomedov won 12 matches that including wins from his dominating stint at ProFC promotion.

Late 2011 was a turning point for Nurmagomedov, whose “lossless” winning streak secured him a deal with the Ultimate Fighting Championship (UFC).

While at the UFC, Nurmagomedov was an unstoppable force from his debut match against Kamal Shalorus in early 2012 to April 2014 when he defeated Rafael dos Anjos.

Thereafter, the fast-rising mixed martial artist became non-fit for fighting. In fact, he had to cancel several matches between September 2014 and 2015 owing to either ill health or complications arising from the knee surgeries.

It wasn’t until 2016 that Nurmagomedov made a comeback to the sport by clinching a win against Darrell Horcher at the UFC.

He maintained his streak in the next two bouts and emerged as UFC Lightweight Champion when he defeated Al Iaquinta at UFC 223.

Fast forward to the time of writing, Nurmagomedov is the reigning UFC Lightweight Champion with the impressive record of 28 wins and no losses.

This win came after defeating Conor McGregor around December 2018. The undisputed fighter’s (28-0) streak gives him the record of being the longest active undefeated streak in MMA. The rest, as they say, is history.

Moving on to Nurmagomedov’s love life, he is neither single at the time of writing nor romantically involved with a girlfriend. The combat sportsman is rather enjoying a marital relationship with his wife Patimat.

Not much was known about Khabib Nurmagomedov’s wife – Patimat – asides her name. In fact, her face was not revealed on their wedding day neither does Nurmagomedov share photos of her on social media.

The couples started as childhood friends and stuck by each other over the years until marriage. Thus, it is no rocket science as to why Nurmagomedov had no public girlfriend before Patimat.

Their union is blessed with two children. A daughter named Fatima (born 1at June 2015) and a son identified as Magomed (born in December 2017).

Everyone has a family, there are the most precious things in life. We bring you facts about Khabib Nurmagomedov’s family members beginning with his parents.

Fatima is the loving and supportive mom of the martial artist. He always listens to her and admits that she’d forever come first in matters of his heart.

Thus, it is obvious that Fatima is the most favourite of Khabib Nurmagomedov’s parents. Her untold support in the life and rise of her second son will be forever cherished by him.

To start with the figurehead of Khabib Nurmagomedov’s family is his dad – Abdulmanap Nurmagomedov.

He is a Russian Army veteran as well as a respected coach who has helped refrained numerous youth from becoming violent by channelling their aggressive energy into combat sports.

Nurmagomedov credits him for being a disciplinarian who always seeks to bring out the best in him.

Khabib has just two siblings. They include his older brother Magomed Nurmagomedov and his younger sister Amina. Magomed is also a mixed martial artist.

However, he is yet to debut for any prime fighting organization at the time of writing. On her part, Not much is known about Amina who is hidden from the public like most females of Khabib Nurmagomedov’s family.

Away from Khabib Nurmagomedov’s parents and siblings, not much is known about the martial artist’s family roots or ancestry, particularly his maternal grandparents as well as his paternal grandfather and grandmother.

Similarly, there are no records of Nurmagomedov’s aunts and uncles while his nieces and nephews are yet to be identified at the time of writing.

However, Khabib has many cousins notable among them is Omar Nurmagomedov who is also making waves in MMA.

Away from his in-net endeavours, Khabib Nurmagomedov has one big personality that blends the smart, sophisticated, generous and hardworking qualities of Virgo zodiac traits with a virtuous persona.

In addition, he rarely reveals facts about his private and personal life while activities that make up his hobbies and interests include watching & playing football games, travelling and spending a good time with his family and friends.

Do you know that Khabib Nurmagomedov’s net worth stands at an estimated sum of $11.5million at the time of writing this biography?

Contributing streams of Nurmagomedov fast-rising net worth are his earnings from winning bouts as well as revenue generated from endorsement deals.

As a result, the MMA star doesn’t need to break banks in order to live a luxurious lifestyle.

Although the value of Nurmagomedov’s house at Makhachkala (the capital of Dagestan) is yet unknown, he does have exotic cars produced by brands like Mercedes, Ferrari, Toyota among others.

A sign of a Luxurious lifestyle. The UFC Fighter posing next to his Mercedes-AMG GT luxury car. Credit: EsentiallySports.

To wrap up our Khabib Nurmagomedov childhood story and biography, we present little known or untold facts about the mixed martial artist.

Early on, Khabib Nurmagomedov’s parents guided him on becoming a religious mixed martial artist. In fact, he is a practising Sunni Muslim of the Shafi’i system of jurisprudence.

Did you know?… The joy Khabib Nurmagomedov’s family knew no bound at the moment Khabib broke the record of becoming the first Muslim to win a UFC title. Kamaru Usman, another Muslim UFC champion follows.

Nurmagomedov frequently wears a papakha wig after fights and during promotions because it is a part of his Dagestani Avar culture. in Dagestanian culture, the wig is used by soldiers to keep their head warm.

Probably not unconnected to his religion, Nurmagomedov has no tattoo and does not strike fans like one who would get one in the future. He’s rather proud of standing tall  – at a height of 5 feet 10 inches – just as he was created.

Do you know that Khabib Nurmagomedov is one among a few UFC fighters that speak several languages. The languages include Avar, English, Russian, Turkish, and Arabic.

Being a devout Muslim, Nurmagomedov does not drink nor smoke. This is because it is against his religion. Similarly, he frowns upon those who indulge in such habit stressing that humans ought to live responsibly.

FACT CHECK: Thanks for reading our Khabib Nurmagomedov Childhood Story plus untold biography facts. At childhood biography, we strive for accuracy and fairness. If you see something that doesn’t look right in this article, please place your comment or contact us!