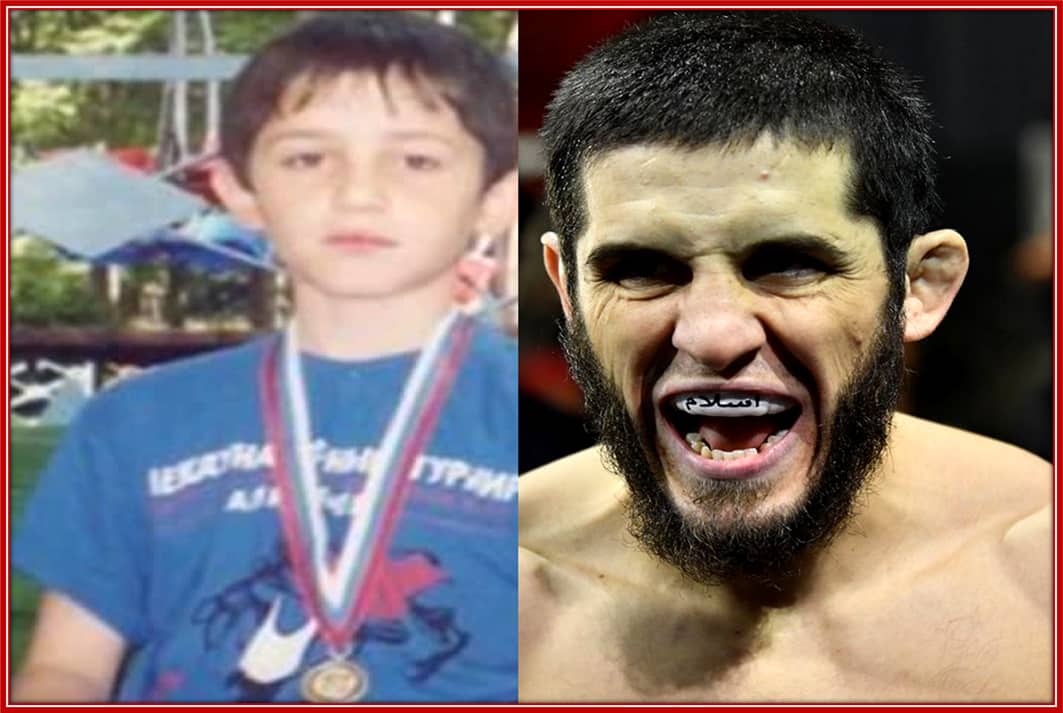 In simple terms, the aim is to convey a detailed overview of this professional mixed martial artist. Our story starts from the moment of his birth until his fame.

We have thought it fit to bring you his Early Life and Success pictures to tickle your fancy. Behold the gallery of events surrounding his life from his humble beginning.

Yes, we all know him to contend in the Lightweight division for the Ultimate Fighting Championship (UFC).

Islam Makhachev is also a Combat Sambo World Champion. Aside from his awards and records, we have noticed how many people are yet aware of his life story.

As a result, we have thought it best with all pleasure to bring you the fascinating tale of Islam Makhachev. In addition to a breakdown of his wrestling events. So, with much ado, let’s begin.

For the sake of this memoir, we will begin by talking about his birth history. Islam Ramazanovich Makhachev came into this world on September 27, 1991.

The MMA fighter spent his childhood where he was born in Makhachkala, Dagestan, Russia.

He grew up in the distant village of Burshi, where he received instructions and competed in combat sambo (a martial art that originated from Russia).

In an interview, Islam Makhachev mentions that he got involved in several scuffles while growing up in Burshi. The people in the village perceived him to be a weakling since he had to relocate from his birthplace.

Their reason being that Makhachkala in Dagestan is an urban area when compared to Burshi.

Growing up with Khabib Nurmagomedov played a pivotal role in his career choice and education as well.

On a pleasant note, both of them still train together to date. The clips below explain further Islam Makhachev’s Upbringing and Relationship with Khabib.

The Russian-born athlete comes from a home with a good wrestling background. His parents were poor, they had just enough to make sure that the home members accessed the basic human needs of life, such as feeding, shelter, and clothing.

As earlier stated, the Combat Sambo World Champion was born in Makhachkala, one of the most visited capitals of the Republic of Dagestan in Russia. The city abides in the Caspian Sea and is also known as the Land of Mountains.

Makhachkala contains over thirty ethnic groups indigenous to the territory. However, Islam Makhachev’s ancestry is of Lak ethnicity, within Dagestan in the North Caucasus.

Natives of this ethnocultural area, Lakia, speak the Lak language. Below is a Map illustrating, in logical terms, his family roots.

As a young person who has grown to love the engaging sport, Islam Makhachev refused to waste his time deciding to make mixed martial arts a profession. His keen association with a world champion mixed martial artist, Khabib Nurmagomedov had its role to play.

Islam Makhachev made his Mixed Martial Art (MMA) debut in August 2010. The wrestle was against Magomed Bekbolatov in the Tsumada Fighting Championship. Fortunately for him, he emerged victorious via a unanimous decision.

On the 12th day of February 2011, he made his M-1 Global debut against Tengiz Khuchua. Islam Makhachev again conquered the scuffle but via Knock Out this time in the first round.

Like many Mixed Martial artists with an early career start, Islam Makhachev had little or no time to sit in the four (4) walls of a classroom for formal education. Even though he must have attended a primary school in his country home, Burish.

Young Islam howbeit, asides from the conventional education, underwent an informal education. His training would help him emerge successfully as a professional mixed martial artist. Makhachev was vigorous in his lessons and that was his major success secret.

Fighting his way to the top, on the 9th of August 2013, Islam Makhachev stood against Mansour Barnaoui at M-1 Challenge 38 in his second contention for promotion. Just like his debut, he again triumphed via a unanimous decision.

Islam dominates his matches with his punches before finishing. In his last bout set against Ivica Truscek, he stood defeated over the game in the 3rd round via submission. Since then, he has stood out as one of the unbeaten personalities.

Steadily finding his way towards the limelight, Makhachev won a gold medal in the 2016 World Combat Sambo Championship. He emerged tops in the last match with a 7–0 over Valentin Banished of Bulgaria.

Islam then continued his lessons and improved drastically compared to his prior performances. The dogged wrestler earned for himself many more victories, most of which he won via a unanimous decision.

Much later, in April 2019, Islam engaged in a battling tournament that would bring him the fight of the Night award. He faced Arman Tsarukyan at UFC on ESPN+ 7, where he won the contest via a unanimous decision.

As of July 2021, Islam Makhachev has impressive Twenty victories and only one loss in his MMA career. Aside from being a Combat Sambo World Champion, he ranks as the number 9 in the UFC lightweight rankings as of May 2021. For more details, watch the clip below.

Who is Islam Makhachev Girlfriend?

The Russian grappler and martial artist have revealed little about his personal life. Despite his numerous interviews, it’s been challenging to get any valuable content about him or anyone connected to him.

However, it got rumored that Islam Makhachev got married on the 8th day of April 2021, in Makhachkala, Dagestan. The lightweight star tied knots along with his spouse after his victory over Dober at UFC 259.

He booked a resort with thousands of friends in attendance. UFC stars like Khabib Nurmagomedov, Zubaira Tughukov, had been present throughout the ceremony. Nonetheless, the name of the bride or details about her is unavailable at the moment.

The Russian Mixed Martial Artist maintains privacy regarding his parents, siblings, other relatives, and personal life. Therefore, it has become challenging for us to gather detailed information concerning his grandparents, parents, siblings, and relatives.

Having said all that, let’s take a quick breakdown of what we know about each member of the home.

We know that Islam Ramazanovich Makhachev was born in Dagestan to his mother and father in 1991. Contrariwise, the names of both his parents are undisclosed. Notwithstanding, we are aware that both of his parents are of Lak origin in Russia.

It is also very possible and most likely that the Combat Sambo World Champion has other siblings from his parents, whether half or full of blood. Islam Makhachev’s Siblings should be proud to associate with their brother, but we are still yet to figure out who they are.

The Russian-born athlete belongs to a family that works hard to keep their household information as discreet as possible.

Makhachev spends most of his time training MMA and doing different hobbies more often than not.

He enjoys playing football, keeping fit in the gym, fishing is his forte, and mountaineering. Moreso, he also loves horses and is often sighted riding them.

He is pretty active and well known on social media, with personal and verified accounts on major platforms. He has 3 million Instagram followers and he has about 5k followers on Twitter.

The lavish and grandeur exuded by most Mixed Martial artists speaks volumes of how fat the bank accounts should be reading. Islam Makhachev is not exempt. He has made lots of money battling and winning his matches.

His victories and awards have pushed his worth throughout his career. So, he can afford luxury houses and cars. He loves Sportscars.

The Mixed Martial Artist UFC battles have always been a center of attraction. Their net worth is reportedly being a popular focus. According to Media Referee, Islam Makhachev’s net worth is nearly $500,000 as of 2021.

His earnings from the last battle against Drew Dober is about $105,000. Other revenues include an estimated $63,000 when he faced Davi Ramosin in September 2019 and $109,000 in August 2018 while winning the struggle against Arman Tsarukyan.

We have pictured Islam severally advertising supplements that aid good health and boost immunity. The product is a black cumin oil known as Alhadaya. The black cumin oil also contains the whole set of vitamins necessary for the body.

In addition to the black cumin oil, we have also observed him branding another supplement called Fitrod. Ramazanovich, likewise, is a brand promoter for the Gorilla energy drink. 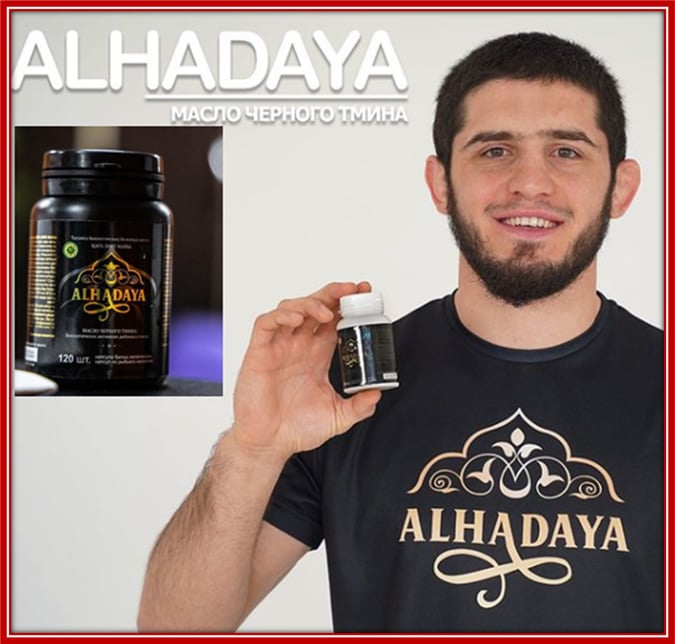 Apart from the life story told so far, here are exciting Facts About Islam Makhachev and his mixed martial arts career.

So far, Islam, in all his contests, has made an only loss. His only loss in UFC was against Adriano Martins that held on the 3rd day of October 2015. Adriano Martins dominated the whole scenario during the game right from the beginning and won in the first round.

Makhachev was supposed to face Drew Dober on the 16th day of April, 2016. After the weigh-ins, the UFC announced Makhachev had failed an out-of-competition drug screening, testing positive for the banned anti-ischemic meldonium.

As a result, the match got canceled. Fortunately for Islam, much later in July of the same year, USADA lifted the suspension of Makhachev after a hearing from the court.

However, In March 2021 Islam got slated to wrestle with Drew Dober again. But this time the engagement took place, and Makhachev crushed Drew Dober with a third-round arm-triangle. Despite that, one of the scariest MMA, Nate Diaz described the match as Boring.

Islam Makhachev, aside from being a Russian native, is a devoted Islam, just like his name depicts. He once pulled out of MMA at the beginning of August 2017, citing a religious reason, and Mads Burnell replaced him.

The fight got scheduled to take place against Michel Prazeres on the 2nd day of September 2017, at UFC Fight Night 115.

The top-rated Makhachev is among the prospect under Khabib Nurmagomed’s stewardship. So has been pretty much compared with his mentor, brother, and friend.

Many people perceive him as the next Khabib. In the same vein, as Khabib is retiring, he projects Islam to fill in his vacuum. 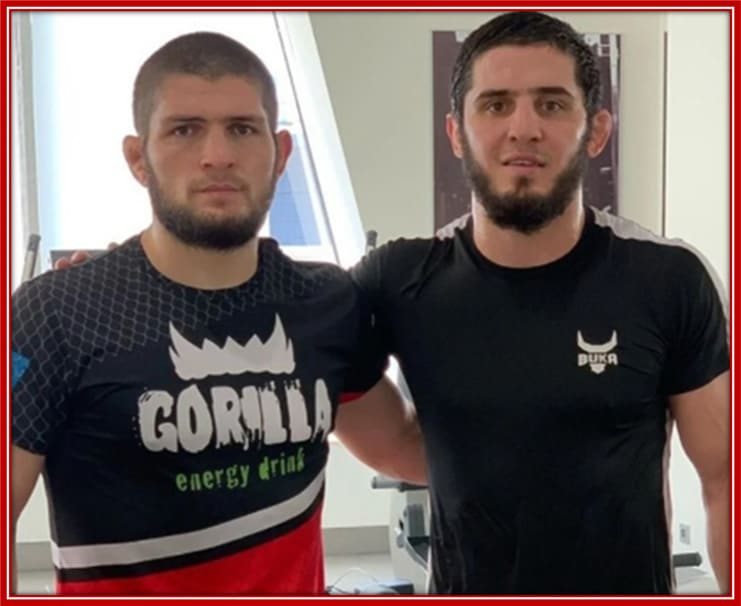 Makhachev has gotten truckloads of fame and hype from Khabib Nurmagomedov. The retiring MMA has declared him the king without a crown of the Lightweight division.

So placing Islam Makhachev on the perks of being part of Team Khabib. Islam is presumed to hold the belt for a long time once he takes it.

Our wiki knowledge base of Islam Makhachev is an on-the-glance summary of his life history. The table below will help you find factual information concisely and efficiently.

We hope that you enjoyed the Islam Makhachev Biography and Childhood Story. We have noticed how his close tie with Khabib Nurmagomedov, both a trainer and friend, has positively influenced his MMA career.

However, for a successful mentee-mentor, the mentee must have remained humble. Islam Makhachev is easy to correct, irrespective of his increasing accolades and impressive records.

Did you find Islam Makhachev Biography and Childhood Story to be helpful?. Likewise, do you have anything else that would help us in terms of best practices? Please send us a comment to let us know.

Otherwise, we appreciate you for reading and remaining connected for more biography facts with sterling accuracy.