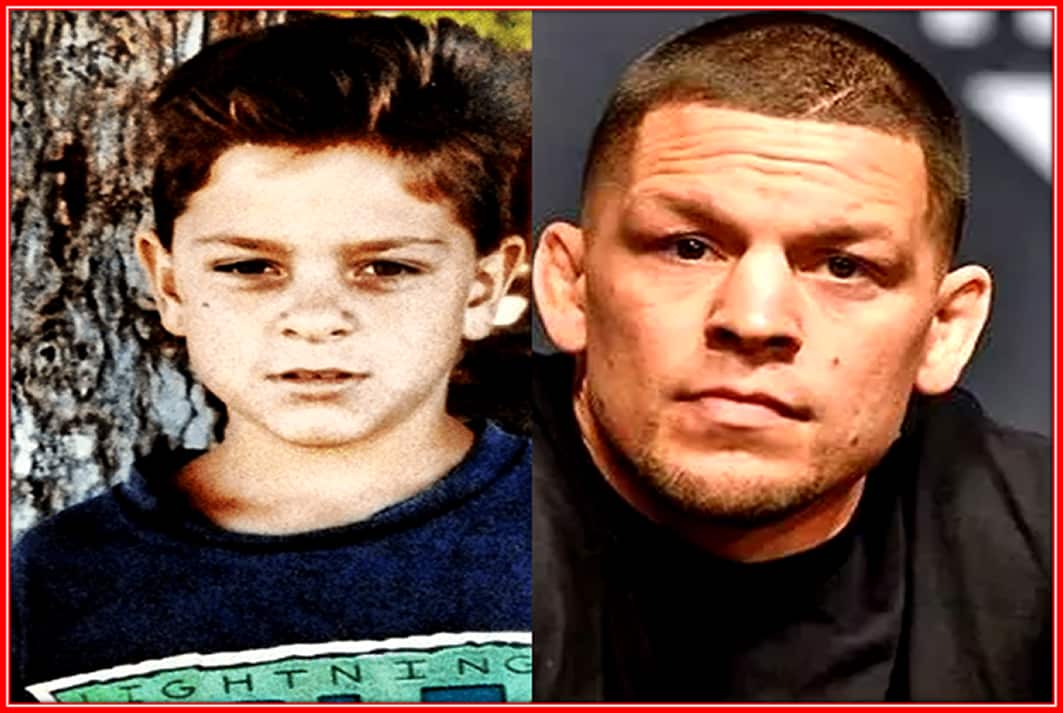 Our Nate Diaz Biography tells you Facts on his Childhood Story, Early Life, Parents, Family, Girlfriend/Wife to be, Lifestyle, Religion and Personal Life.

Simply put, we have here an engaging BIO of important events in the life of the mixed martial artist, starting from when he was a child to when he became famous.

Yes, everyone knows of his brash attitude, charisma, and penchant for finishing his opponents in a spectacular fashion.

However, not everyone has read Nate Diaz’s biography, which is quite insightful. Now, without further ado, let’s begin.

For Biography starters, Nathan Donald Diaz was born on the 16th day of April 1985 at Stockton in California, U.S. He is the second of three children born to his mother, Melissa Diaz and to a little known father.

Young Diaz grew up in a small, one-story house at Lodi – just north of Stockton, California -alongside two siblings. They include his older brother – Nick Diaz, and a younger sister known as Nina.

Although Nate is an authentic national of the United States, his paternal family roots stretch a little farther beyond the land of the free to Mexico. He also has German ancestry from his mother’s side.

The neighbourhood which Nate grew up in at Stockton was a rough one. Violence was the order of the day.

Although the then kid and his siblings were young, they were big on observing things especially the rife fightings which they knew wasn’t meant to be normal.

Another ‘abnormality’ that the siblings became aware of was the fact that they were just a bit better than the poorest of the poor.

It was easy for them to note that other people had good stuffs, nice houses and never had to think much about where their next meal would come from.

By the time Nate was in his early teens, he was not good with studying at Tokay High School. Instead, he was keen on accompanying his older sibling – Nick to a Jiu-Jitsu gym where the latter was training to become a fighter.

It wasn’t long before the younger Diaz began training in Jiu-Jitsu with a view to becoming a fighter like his older sibling. Nate wasn’t good at practising Jiu-Jitsu.

However, he never gave up on training because, after practice, the older trainees would buy him and his brother burrito from a food truck that pulled up near the gym each night.

Before Nate would know it, he got his first-ever combat sports belt in Jiu-Jitsu and went on to become a cage fighter.

Thereafter, things began to work faster for the fighting prodigy who began competing for WEC Lightweight Championship in 2006.

While at WEC, Nate fought his way up to the point that he was eligible to negotiate a title fight against the competition’s then-champion, Hermes Franca.

Although he lost to Hermes in the second round of the contest, there was nothing stopping his Zeal from becoming a formidable fighter.

It was just a matter of a few months before Nate began fighting for the Ultimate Fighting Championship (UFC) in 2007.

Like most MMA fighters, he started his journey at UFC with the right footing by recording no fewer than 5 consecutive wins.

The fast-rising fighter’s first loss came in 2009 when he went up against Clay Guida at UFC 94 on the 31st of January 2009. The loss was quite devastating for him because it was his pay-per-view debut.

Moving on, Nate’s career records in the ensuing years were a mix of wins and losses. He wasn’t making enough money, neither was he recording a meteoric rise in popularity like his counterparts.

Fame eventually opened her doors to Nate when he was surprisingly set as a replacement to face Conor McGregor at UFC 196.

Not one to miss a rare shot at fame, Nate gave the fight his all and won not just the contest, but the fight of the Night honours as well as the performance of the Night bonus.

Fast forward to the time of writing this bio, Nate is one of UFC’s popular fighters and ranks number 10 in the UFC welterweight rankings.

Whichever position his name falls in future rankings, the rest, as they say, would always be history.

The seemingly constant thing in the life of Nate is his love for his girlfriend Misty Brown. This is where we begin.

The love birds met and began dating as far back in 2012. A look at photos of the couples together would convince you that they are perfect for each other.

In 2018, it was reported that Nate Diaz’s girlfriend – Misty had given birth to their daughter Nikayla. As such, it is safe to say that there are now 2 women very close to the fighter’s heart. Wouldn’t you agree?

Unarguably the least known of Nate Diaz’s parents is his dad. Although we still don’t have his full name but we know that he is a line cook.

Nate is looking at buying his dad a restaurant of his own. The moves speak greatly of the good father-son relationship which they both share.

Melissa Diaz is the mother of the fighter. She used to be a waitress and reportedly met Nate’s dad at a diner.

If Nate Diaz’s childhood story were to be told in every detail, Melissa’s name would keep recurring because she was with her kids all the time while her husband was mostly away. Thus, it safe to conclude that she is the favourite of Nate Diaz’s parents.

The fighter has a younger sister Nina, and a bigger brother, Nick. Nina is living in the shadows of her brothers, who have made names for themselves in MMA.

Yes, the oldest of the sibling – Nick is a great mixed martial artist with excellent UFC records. Nate never cease to credit Nick for inspiring him to become the fighter that he is today.

Moving on from Nate Diaz’s parents and siblings, his maternal grandfather and grandmother were Earl Donald Womble and Loella May Taylor respectively, while there are no records of his paternal grandparents.

The same goes across the board for his uncles, aunts, cousins as well as nieces and nephews.

Who is Nate Diaz beyond the world of MMA and what attitude is he most likely to give when he is not thinking combat?

Sit back as we bring you facts about the mixed martial artist whose personality traits are similar to those of individuals born under the Aries Zodiac Sign.

He is assertive, goal-oriented, friendly, understanding and open to revealing facts about his private and personal life.

There are a number of things that interests him outside combat but only few can be regarded as his hobbies.

They include smoking, keeping up with American football, swimming, playing basketball, and spending good time with family and friends.

Regarding how Nate Diaz makes and spends his money, the fighter has a net worth of around $8 million at the time of writing this Biography.

The larger chunk of his wealth comes from the winning bonus he gets from fights.

He also racks up significant bucks from endorsements. Little wonder Nate has a comfortable house of his own just a mile from where he grew up at Stockton.

What speaks more of the fighter’s luxurious lifestyle is his possession of expensive cars that includes a Ford SUV among other rides.

To wrap up our Nate Diaz’s childhood story and biography, here are lesser-known or untold facts about the fighter.

Did we mention that the fighter never completed high school? in fact, at some point, he began selling marijuana while his social circle was basically reduced to his smoking buddies.

Fortunately, he still didn’t let go of training in combat sports, a decision that eventually did help him overcome his vices.

The fighter is not a religious type like his counterpart Khabib Nurmagomedov. His interviews are riddled with expletives that don’t make him strike fans as someone who believes in a supernatural being.

Nate is big on dogs with a noticeable preference for the ones that look like bulls. The fighter is often proud to show off his dogs and his face brightens whenever he has something to say about his choice of dogs.

Did you know that Nate Diaz now has a black belt in Brazilian Jiu-Jitsu? He also trains in boxing and kickboxing. Probably of major importance is his participation in Triathlons, which he credits for helping him build endurance.

There is no denying the fact that our article on Nate Diaz’s biography has given you a better understanding of the fighter as well as helped you appreciate how far he has come in the world of MMA.

Yes, We did try our possible best to ensure that this writeup is both factual and fair, nonetheless, we are open to making corrections if you come across anything that doesn’t look right.