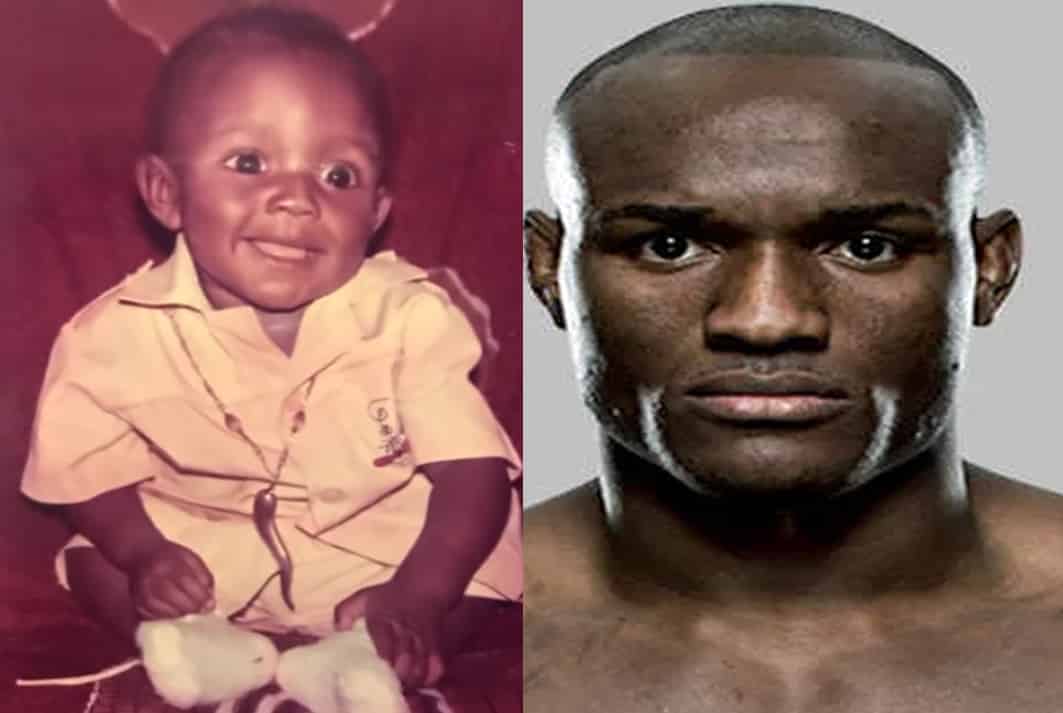 Childhood Biography presents the Full Story of a Nigerian-born MMA Fighter with the nickname “The Nigerian Nightmare.”

Our version of Kamaru Usman’s Biography and Childhood Story contains a full account of notable events from his childhood.

Yes, everyone knows of his rise from oblivion to fame. However, only a few consider Kamaru Usman’s quite exciting biography. Now, without further ado, let’s begin.

For Biography starters, Kamarudeen “Kamaru” Usman was born on the 11th day of March 1987 at Auchi, in Edo State, Nigeria. He was born to a homemaking mother and to a father who served in the Nigerian Army.

The American and Nigerian national of Black ethnicity with African roots hails from a middle-class family background and was partly raised in his hometown at Auchi, Edo state.

Growing up in Auchi alongside his younger brother, Mohammed and a younger sister, Kamaru lived the life of a peasant.

He trekked for miles to fetch water like most locals in his hometown and served as a farmhand in his family’s farm.

Kamaru was still a kid when his father moved to the United States to study towards becoming a pharmacist.

Not long after, Kamaru’s father brought his entire family to live with him at Texas when the fighting prodigy was aged 8.

Living in the U.S.A was a brave new world for Kamaru who had a poor command of English language. Nonetheless, he was quick to adapt to American culture following his enrollment in school.

While at the school Kamaru struggled to establish himself in the school’s football team and soon gave up after sustaining an injury.

Moving on Kamaru tried wrestling in line with the suggestion made by his high-school wrestling coach at the time.

Although Kamaru was repeatedly beaten by a girl during his early training in the sport, he was not deterred but worked harder to become better.

Thus, he pulled an impressive record of 53-3 in wrestling at Bowie High School in Arlington, Texas before progressing to William Penn University, where he became an NAIA national qualifier.

He went on to win the NCAA Division II national title in 2010 and was a member of the University World Team for freestyle wrestling in 2010.

Although Kamaru was an exceptionally good wrestler, his chances of making a living off the sport were limited.

As a result, he committed to becoming an MMA fighter after he was briefed on the career prospects in MMA by former UFC light heavyweight champion, Rashad Evans.

Armed with determination, Kamaru made his MMA debut in a winning effort against David Glover in November 2012 at RFA 5 in Nebraska.

However, the second fight proved to be the worst Kamaru has ever had as he recorded his first and only loss to Jose Caceres.

Kamaru Usman recorded his first and only loss during his second MMA fight with Jose Caceres. Credits: Sherdog.

Relentless and undaunted, Kamaru stuck with MMA and progressed from fighting in regional promotions to “The Ultimate Fighter” also known as the breeding ground of UFC fighters.

While at the Ultimate Fighter competitions, Kamaru recorded victory upon victory and established himself as one of the fans’ favourites.

At the peak of his fights in the competition, Kamaru defeated Hayder Hassan in July 2015 to clinch a six-figure contract with the UFC.

Over the next three years, Kamaru dominated the UFC by pulling off undisputed victories.

Kamaru’s impressive form was borne out of his intense desire to win the UFC Welterweight Championship title being held by Tyron Woodley.

Thus he slowly fought his way through and beat competitions to finally face Tyron Woodley on the 2nd of March 2019 in the co-main event at UFC 235.

Kamaru won the fight by a dominant, unanimous decision. With the victory, Kamaru became the new UFC Welterweight Champion as well as the first African born UFC champion. The rest, as they say, is history.

Usman is yet to be married, at the time of writing this Biography. We’ll bring you details about his dating history and current relationship status.

To begin with, the MMA fighter is not known to have dated any lady before he met his Brazilian girlfriend and baby mama.

The Portuguese speaking girlfriend has been in a relationship with Kamaru for years and they have a 4-year-old daughter together called Samira Usman.

Kamaru is proud of his biracial daughter and never ceases to show her off on his social media accounts.

What a lovely household Kamaru has.

Kamaru was born into a family of 5. We bring you factual details about members of his family.

Kamaru’s father is a soldier who served in the Nigerian Army and has involvement in the US Military.

He is credited for not forcing Kamaru to become an athlete. Nonetheless, he wanted him to become a baseball player.

Kamaru mother was a homemaker who took good care of him and his brothers. She initially did not approve of Kamaru’s career choice in professional combat but now has reasons to be proud of him.

Kamaru has three siblings with whom he grew up with. They include his younger brother Mohammed Usman and another brother whom little is known about.  In addition, there’s not much known about his younger sister.

Mohammed Usman is an MMA fighter like his big brother. He fights in a different division and does not train with Kamaru. Nonetheless, there is no bad blood between them.

Kamaru is yet to speak about members of his extended family. Neither has any identified with him so far.

Nonetheless, there’s no denying the fact that he has grandparents, uncles, aunts, cousins nephews and nieces who are proud of how far he has come in MMA.

First and foremost, Kamaru Usman has no tattoos. This makes him one of very few MMA fighters who have no arts on their bodies.

He speaks good English language and has a good command of pidgin English. Kamaru uses the latter to identify with his Nigerian family roots like in the video below.

The MMA fighter considers fighting as a hobby. His other hobbies include playing video games and painting.

Kamaru used to be known as “Marty”, a name given to him by his wrestling coach at the University of Nebraska because he found it difficult to pronounce “Kamaru”. Hence Kamaru is also known as “Marty from Nebraska”.

He inherited his current nickname “The Nigerian Nightmare” from a Nigerian-American former American football running back known as Christain Okoye.

The former football player is proud of Kamaru and has given him the blessing to bear the nickname he used to bear between 1987 to 1992.

Regarding his religion, Kamaru identifies as a Muslim who believes in fate, Karma and trusts in God.

FACT CHECK: Thanks for reading our Kamaru Usman Childhood Story plus untold biography facts. At childhood biography, we strive for accuracy and fairness. If you see something that doesn’t look right in this article, please place your comment or contact us!