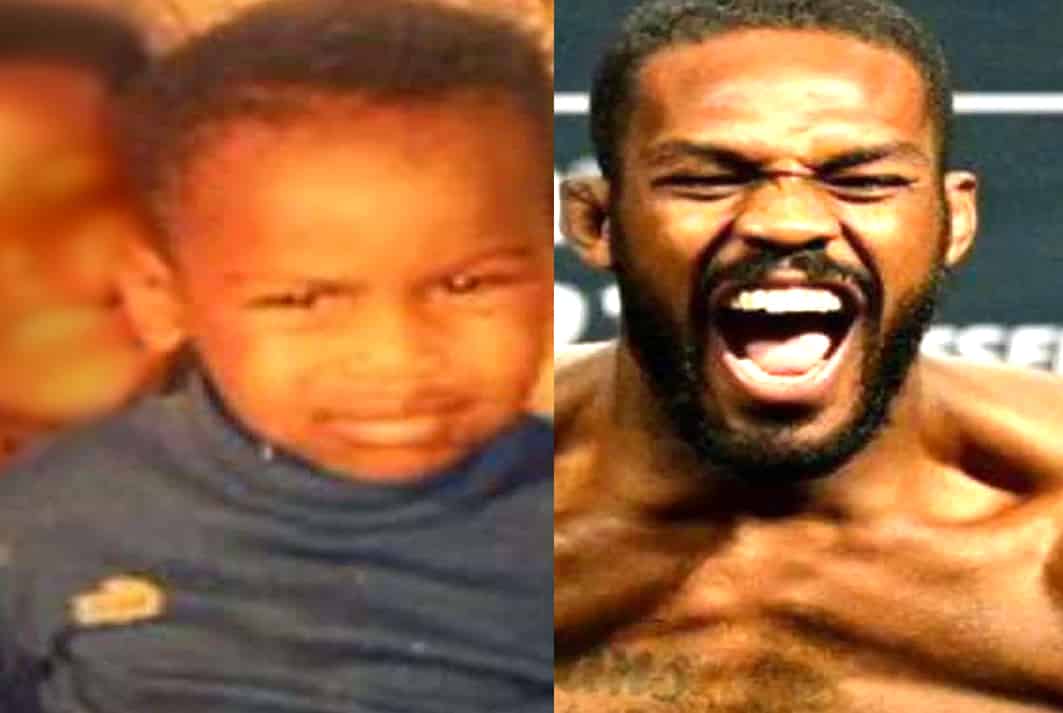 Starting off, he bears the nickname is “Bones“.

More so, Jones’ Lifestyle, Personal Life and other notable events right from when he was a child to when he became popular.

Yes, everyone knows he is one of the greatest mixed martial artists. However, only a few consider Jon Jones’ biography, which is quite interesting. Now, without further ado, let’s begin.

For Biography starters, Jonathan Dwight Jones was born on the 19th day of July 1987 at the city of Rochester in New York, U.S.

The Fighter is the third of four children born to his mother, Camille Jones and to his father, Arthur Jones Jr.

Yes, there are no questions about Jon’s nationality while his Afro-American ethnicity and family origins go without saying.

Do you know that Jon was raised at Endicott in New York alongside his older brothers Arthur Jones III and younger bro Chandler Jones? The town is famed for being the birthplace of IBM and Endicott Johnson shoes.

Thus, it is surprising how tech and manufacturing never made the list of Jon’s childhood interests and hobbies. Jon rather grew up with interests in football and combat sports, regardless of his strict upbringing.

Starting off, Jon’s parents were big on religion and made a living out of the religious business. His dad was an assistant pastor while his mom was also active in the church, supporting her husband.

Little wonder Jon hails from a lower-class family background because the religion business doesn’t pay much, especially when his dad was the assistant pastor.

Neither could Jon’s Mom daytime hustle as a nurse do much to lift the family out of financial struggles.

Notwithstanding, they worked really hard and stayed together showering love on Jon and his brothers including his older sister Carmen Jones.

By the time Jon was in his early teens, he began giving his inherent athletic gifts productive expression. First was his excellent participation in wrestling at Union-Endicott High School in upstate New York.

While at the same Highschool, Jon also played football and served in his school’s team as a defensive lineman. It was at the school that Jon got the nickname “Bones” because he had a lanky frame at the time.

It would be pretty unfair to say that Jon never had an interesting early career with wrestling.

This is especially when one is oblivious of the fact that he briefly studied at Iowa Center Community College.

His brief stay at the college saw him become very invested in college wrestling such that he became the winner of a national JUCO championship before proceeding to study criminal justice at Morrisville State College.

Although Jon loved gaining education in criminal justice and progressing as a wrestler, he soon had to forgo the aforementioned interests.

The turning point decision came after the wrestling prodigy realized that his high school girlfriend was pregnant for him.

Like any responsible father, Jon felt the pressing need to make enough money to pay future bills. Thus, he dropped out of college and began training in the lucrative combat sport called mixed martial arts (MMA).

Needless to write much, Jon recorded progress in MMA was in leap and bounds such that he made his debut in a winning effort against Brad Bernard in 2008. He went on to amass an undefeated record of 6–0 before signing with the UFC that same year.

At the UFC, it was victory after victory for Jon who fought his way through to become UFC’s youngest champion ever after he defeated Maurício Rua in 2011.

Fast forward to the time of writing, Jon has a professional record of 26 wins and 1 no contest. His only loss came from a controversial disqualification.

Notwithstanding, he is widely considered to be the best pound-for-pound fighter in the world. The rest, as they say, is history.

Moving on to Jon’s love life, he is happily married at the time of writing to his girlfriend turned wife Jessie Moses. The couples met in high school where they began dating.

It wasn’t until 2013 that Jon proposed to Jessie and officially made her his wife on an undisclosed date.

Their relationship is blessed with three daughters at the time of writing. They include Leah (born 2008); Carmen Nicole Jones (born 2009) and Olivia Haven (born 2013).

Jon is also known to have a little-known daughter from an undisclosed girlfriend. This brings the total number of his children to 4.

A supportive family helps makes life not just good but worth living. This is very much evident in Jon Jone’s family life. Without much ado, here are facts about Jon Jones family members starting with his parents.

Based on findings, Jon’s dad is no other person but elder Arthur Jones. He was an assistant pentecostal pastor during Jon’s early life.

True to his religious vocation calling, Artur always made sure that his children’s upbringing was good. However, he did let them choose their childhood sports and supported them all the way.

Camille Jones was the loving and supportive mother of the MMA fighter. She worked as a nurse for mentally unstable adults and supported her husband in church.

The mother of 4 is known to have been a pillar of support to her children even when she went blind due to the effects of diabetes.

Until her death in 2017, Camille was Jon’s biggest cheerleader and made it a point of duty to inspire him with her presence at his fights.

Jon has an older brother Jones III as well as a younger brother identified as Chandler Jones. Both siblings are popular football players who have won the super bowl. Like their parents, both brothers love flying to wherever Jon is to fight.

Their only sister was Carmen Jones. She died of brain cancer before she could turn 18. Her death made the brothers more resolved to stand and support each other in their pilgrimage on earth.

There is not much known about Jon’s ancestry and family roots especially as it relates to his maternal and paternal grandparents.

Similarly, there are no records of the fighter’s uncles, aunts, and cousins while his nephews and nieces are largely unknown at the time of writing Jon Jones’ biography.

There are just a few people who know about Jon Jone’s personality beyond his boxing endeavors. Sit back as we unravel facts about the fighter’s persona. Interestingly, the Cancer Zodiac sign defines the traits of Jon’s persona.

He is ambitious, trailblazing, unwavering, and moderately reveals details about his private and personal life.

The fighter’s interests and hobbies include paintballing, keeping up with football games, playing basketball, traveling, and spending a good time with his friends and family. 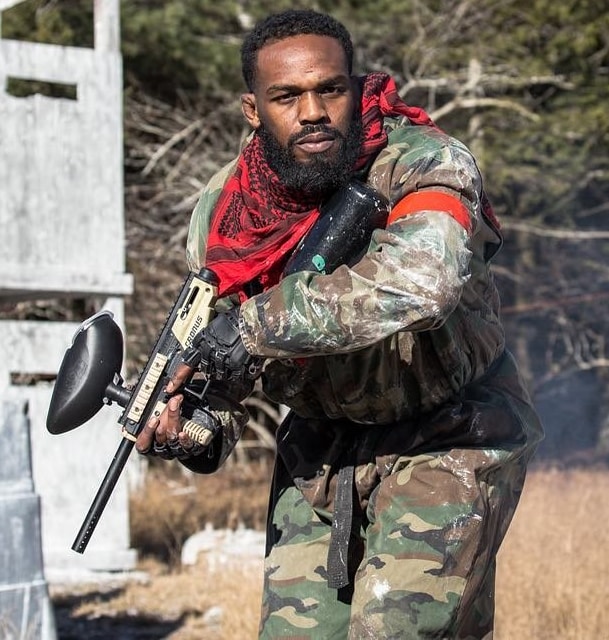 Speak of how Jon Jones makes and spends his money, the aggregate sum of his estimated $12 million net worth takes its origin from the huge earnings that he racks up for winning bouts.

Other constituents of his wealth are monetary proceeds streaming from endorsing brands like Adidas, Reebok among others.

As such, he affordably enjoys spending much on acquiring assets like cars and houses. What more? he flies in chartered private jets! 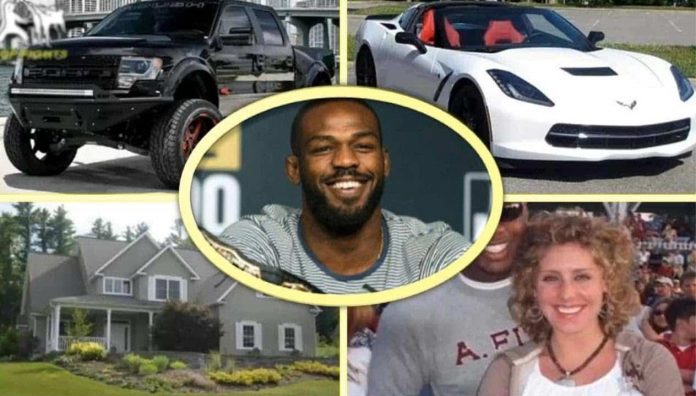 To end of Jon Jones’s childhood story and biography, here are untold or lesser-known facts about the fighter.

Did you know that the fighter has the longest reach in MMA? standing at an impressive height of 6’4″ Jon’s reach of 84.5 inches affords him the ability to attack his opponents from a distance. 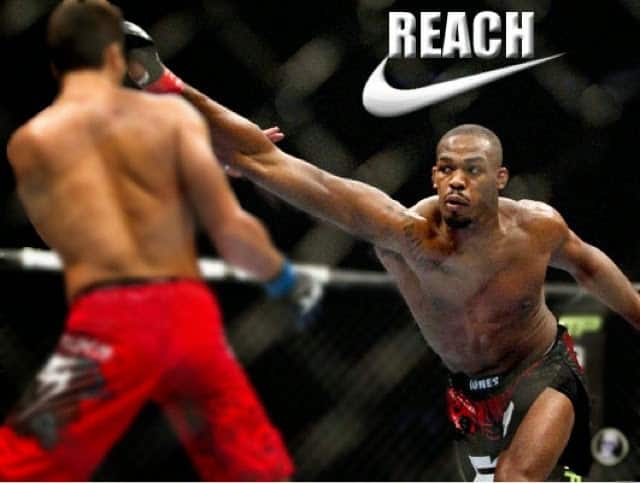 Early on in this article, you’ve realized Jon Jones’ parents are big on religion. Jon is not one to hide his standing on matters of faith, thanks to his religious upbringing! The fighter is in fact, a Christian who goes to church like Christians do and profess his faith in one true God.

It is general knowledge that black MMA star Israel Adesanya has tattoos while Kamaru Usman does not. On his part, Jon has a tattoo of “Philippians 4:13 on his chest. The Bible chapter and verse reads “I can do all things through Christ who strength…” 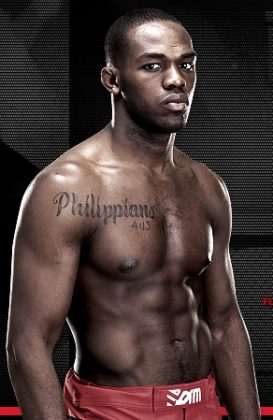 Lastly, in Jon Jones’ Biography, we present you facts about his Cop Duties. Although not a cop, Jon has a natural aversion to injustice and thievery.

On his way to his title fight against Mauricio “Shogun” Rua in UFC 128, the fighter got information that a robber stole a GPS from the car of an elderly couple.

Jon, alongside his trainers, gave the robber a hot chase. They subdued him before the arrival of real cops. 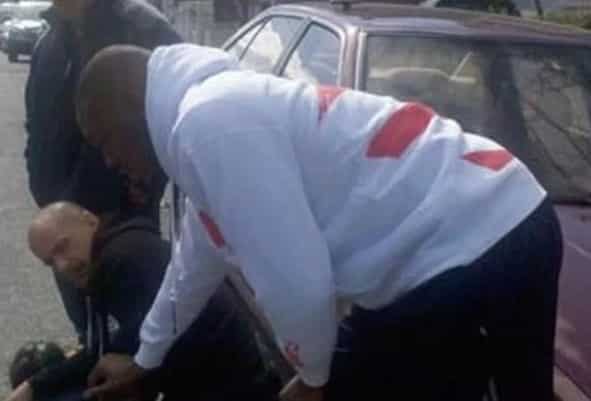