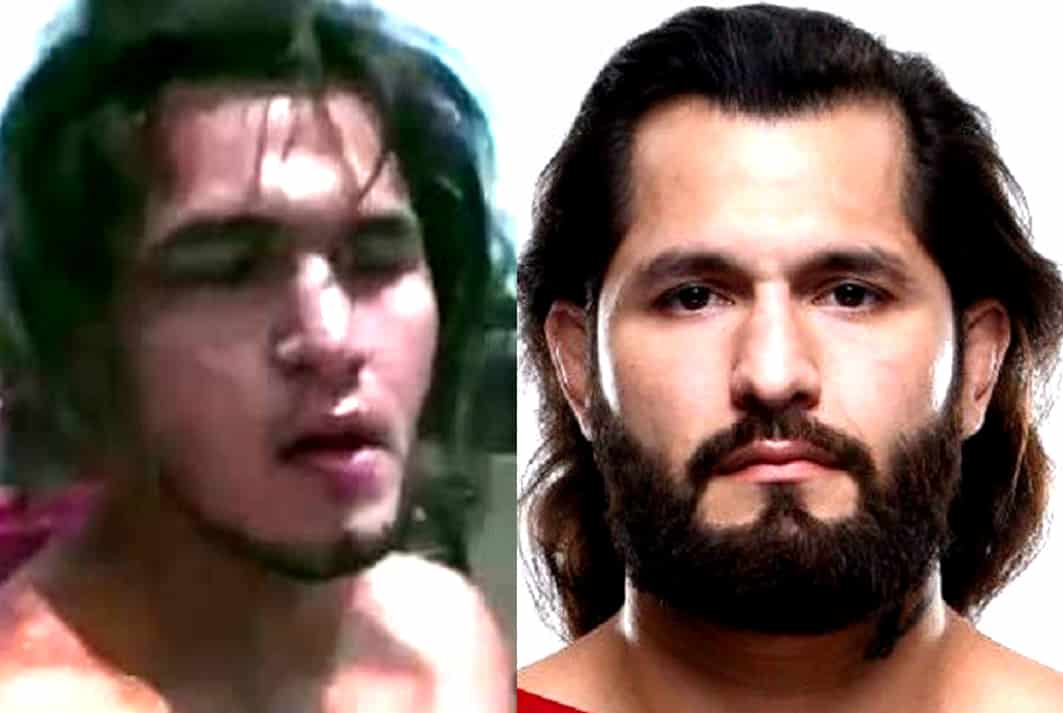 Childhood Biography presents the Full Story of a Mixed Martial Artist with the nickname “Gamebred“.

Our Jorge Masvidal Childhood Story, including his Untold Biography Facts, brings you a full account of notable events from his boyhood days, to when he became famous.

Yes, everyone knows he is one of UFC’s toughest and most popular fighters. However, only a few consider Jorge Masvidal’s biography, which is quite interesting. Now, without further ado, let’s begin.

For Biography starters, Jorge Masvidal was born on the 12th day of November 1984 at Miami in Florida. He is the only child born of the union between his little-known Peruvian mother and his Cuban father, Jorge Masvidal Sr.

Below is a photo of one of Jorge Masvidal’s parents (his super dad).

The American national of mixed ethnicity with Cuban and Peruvian family origins was raised in a bad neighbourhood at the western side of Miami where he grew up in a lower-class family background setting.

Jorge Masvidal’s parents were like most people who worked but didn’t have the best financial education and often times struggled with money to keep their family going.

Growing up in Miami, young Masvidal had so much energy and courage that he began fighting and getting into trouble when he was only 3-4 years old.

“Masvidal fought not just at any given opportunity but created opportunities for himself at anyplace he deemed fit including pre-school”.

Recalled Jorge Masvidal Sr of his son’s early life aggressiveness. Unlike the average kids in the US, Jorge Masvidal’s parents never gave their son many moral values because of though circumstances that were beyond them.

As young Masvidal grew in strength and height, so did his proclivity for getting physical at the slightest provocation.

He even fell in love with boxing and had boxing legends like Roberto Duran & Julio Cesar Chavez as his childhood idols.

By the time Masvidal began his secondary education at St. Brendan high school, he took interest in wrestling but was barred from competing in the sport because of his bad academic grades.

Thus, the then youngster was left with no choice of giving his aggressiveness a productive outlet other than to join a fighting club situated at the school’s backyard.

It was at the club that young Masvidal became a street fighting sensation as videos of him fighting on the streets began to appear online.

Masvidal was eventually expelled from the high school after all efforts geared towards curtailing his aggressive excesses proved abortive.

Since then, Masvidal forgot about school and became focused on making a career out of fighting.

Contrary to widespread beliefs, Masvidal did not begin flexing his muscles in professional boxing shortly after he was expelled from school. Instead, he joined the MMA in 2003 and turned professional that same year.

It wasn’t until 2005 that Masvidal became a professional boxer and had his debut pro fight against Joseph Benjamin that year. Since that time, Masvidal has never been involved in any professional boxing fight.

Although Masvidal also has one recorded professional kickboxing bout, little is known about who he faced in the bout and where it happened.

We could only dig that MMA was where his passion lay and it showed in the quality of his wins as he dominated no fewer than 13 MMA organizations that including Shark Fights, World Victory Road, Bellator, and Strikeforce.

2013 was a turning point in the life and rise of Jorge Masvidal because it was the year that Strikeforce promotion was acquired by Ultimate Fighting Championship (UFC), a development which saw Masvidal acquired too.

While at the UFC, Masvidal managed to keep his head above water by ensuring that his wining ratio superseded his losses.

In 2014, Masvidal became stuck in the UFC because nobody wanted to fight him. Although the fast-rising fighter had not achieved the fame that he much craved for, he was too much of a risk as well as not big enough to become a household name.

To cap it all, Masvidal lost 3 of his 4 matches between April 2015 to May 2016, a development that made it impossible for the fighter to be in a position of negotiating anything with the UFC.

Masvidal’s career in the UFC was eventually resurrected when a veteran fighter – Ross Pearson agreed to about with the desperate fighter.

Needless to write much, Masvidal defeated Pearson by unanimous decision on the prelims of UFC 201.

A ruthless Masvidal went on to win his next two fights in December 2016 & January 2017 as well as looked forward to a breakthrough that he never knew was approximately just 2 years away from him.

Speak of the breakthrough, it came on the 6th of July 2019 when Masvidal knocked out Ben Askren at UFC 239 via a flying knee in just 5 seconds into the first round of the bout.

The joy of all Jorge Masvidal family members knew no bounds at the time he achieved such feat.

The knockout which was the fastest in UFC history did not only earn Masvidal performance of the Night Award but established him as one of UFC’s most ruthless and popular fighters.

Away from Jorge Masvidal’s breath-taking career moments, he has had over a decade of fruitful love life with his ex-partner – Iman Kawa.

In fact, Iman cannot be regarded as Masvidal’s ex-wife because they were never married.

The ex-lovebirds once became parents. Their union was blessed with three little know children (a son, daughter and another child).

Fast forward to the time of writing this bio, Masvidal is single and seemingly focused on delivering more knockouts to take his MMA career at UFC to greater heights as evident in the fighter’s rising wining ratio from his previous 7 fights.

Whenever Jorge Masvidal’s family counts his blessings, they indeed count Jorge twice and can never imagine having a better family life without him.

In this section, we bring you facts about Jorge Masvidal’s family members beginning with his parents.

Jorge Masvidal Sr is the dad of the professional boxer. He is of Cuban family roots and immigrated to the United States at a very young age.

The supportive dad was earlier with Masvidal for the first four years of his early life before he was sentenced to 18 years jail time for drug trafficking.

Even in jail, Masvidal Sr had a good influence on his son who he always admonished to be a law-abiding citizen. The father of one has been since released and enjoys a close relationship with his son.

Although not much is known about Jorge Masvidal mom, the fighter once revealed that she worked multiple jobs to help raise him after his dad was jailed.

She was not just a loving mom but a good wife to her husband as evident in the manner which she hid the fact that Masvidal Sr had been jailed from his son to protect the family image.

It was when Masvidal came of age that his mom explained the secret of the family’s head absence.

About Jorge Masvidal’s brother and sisters:

It appears Jorge Masvidal’s parents had him as the only child.

We back our assertion by the fact that the fighter only talks about his mom and dad during interviews while there are no existing records of his brothers and sisters.

Similarly, not much is known about Masvidal ancestry particularly his maternal grandparents as well as paternal grandfather and grandmother while his uncles, aunts, cousins, nephews and nieces are largely unknown at the time of writing.

Have you ever wondered about what makes Jorge Masvidal tick? Have you tried hard to figure the essence of his off ring personality?

Then keep reading as we reveal facts about the fighter’s persona in order to help you get a complete picture of him.

He is intuitive, outstanding, passionate, reactive. He has a unique sense of humour. And rarely reveal facts about his private and personal life.

The fighter’s interests and hobbies include biking, hiking, skiing, swimming, watching movies as well as spending good time with his family and friends.

Do you know that Jorge Masvidal has an estimated net worth of 1$ Million? At the time of writing this biography?

Constituents of Masvidal’s rising net worth take form in huge earnings. Monies he receives for fighting. While analysis of his lifestyle reveals that he lives a luxurious lifestyle.

Yes, the fighter is not big on flaunting his cars and assets. Nonetheless, there’s no denying the fact that he lives in a house befitting for MMA champions. And he spends big on relaxing at expensive resorts during breaks and vacations.

Our Jorge Masvidal childhood story and biography best wraps up with following little known or untold facts about the fighter.

Nonetheless, he indulges both habits at moderate levels and desists from doing anything capable of compromising his health.

Tattoo: Unlike most MMA fighters, JorgeMasvidal has no tattoos. The 5 feet 11 inches UFC star doesn’t like fans to have tattoos of him. He is rather at peace with his good looks and does not consider body arts as a necessary addition.

Jorge Masvidal’s parents appeared not to have groomed Jorge in having a religious identity. Masvidal is not religious, and he is yet to give clues about his beliefs at the writing.

In addition, he has not made statements or moves that give him away as a non-believer. As such, his position regarding matters of faith lies somewhere between privacy and focus on Mixed Martial Arts.

At ChildhoodBiography, we strive for accuracy and fairness in our quest to deliver you the Biography of Mixed martial artists.

Kindly stay tuned for more related articles in our famous MMA fighter’s category. You may find some interest in the childhood story of Alexander Volkanovski, Dustin Poirier, Alistair Overeem and Jon Jones.