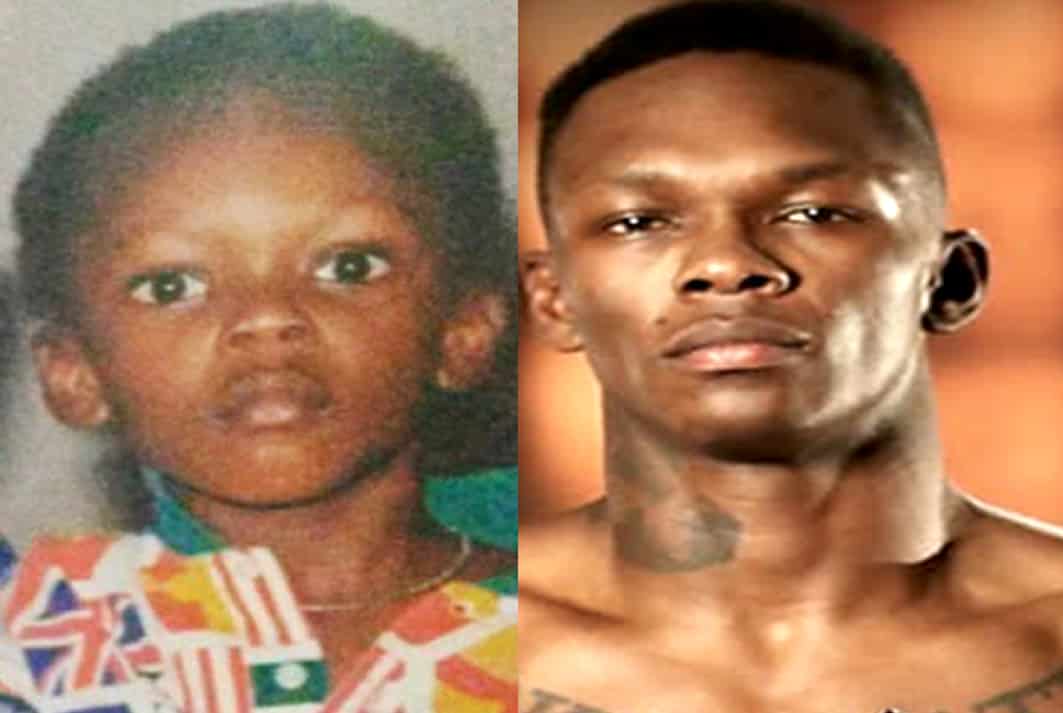 Childhood Biography presents the Full Story of a Mixed Martial Artist with the nickname “The Style Bender“.

Our Israel Adesanya Childhood Story plus Untold Biography Facts brings you a full account of notable events from his childhood time to date.

The analysis of the Nigerian-born New Zealand professional mixed martial artist involves his early life, life story before fame, family background and personal life. More so, other OFF and ON-Screen little-known facts about him.

Yes, everyone knows of his free-flowing but effective fighting style. However, only a few consider Israel Adesanya’s Biography, which is quite interesting. Now, without further ado, let’s begin.

Israel Mobolaji Adesanya was born on the 22nd day of July 1989 in Lagos, Nigeria. He is the eldest of 5 children born to his mother, Taiwo Adesanya (a nurse) and to his father, Femi Adesanya (an accountant).

The Nigerian and New Zealand national of Yoruba ethnicity with African roots was partly raised in Lagos city by his upper-class family.

He grew up in the city as a happy kid alongside his siblings: Deborah, Samuel, David, and Bolu.

“I was very privileged to come from a well-off family. For me, life was sweet and easy in a place where life could be anything”. He revealed to the PlayersVoice.

While he was a kid, Adesanya had the freedom to participate in any sport of his choice and he chose Taekwondo.

The youngster trained in the sport for a while before his concerned mother withdrew him from training after he sustained the injury of a fractured arm.

Adesanya had his primary or basic education at Chrisland School at Opebi in Ikeja, Lagos. He thereafter progressed to Bells Secondary School at Ota in Ogun state for his high school education.

While he was at the respective schools, Adesanya juggled interests between martial arts and dancing as well as discovered a rhythmical connection that harmonized both activities.

“I first learnt how to dance from a friend of mine in school. I’d hang out with dancers and they’d show me new moves. I’d copy it – I’m a good copycat.

And the things that make me the fighter I am – the athleticism, the rhythm – fit right into dancing, too “. He revealed.

The then 12-year-old was not done with secondary school before his parents decided to leave Nigeria in search of better educational opportunities for their children.

The first stop was in Ghana where the family spent 10 months weighing their options between immigrating to the USA in the aftermath of 9/11 attack or New Zealand.

“September 11, 2001, was a big moment for America. My dad felt that the US would be at war soon after, and he was right”. He explained.

The family eventually opted for a move to New Zealand, where they made their new home in the city of Rotorua on the country’s north island.

It was in New Zealand that Adesanya coined the term “Broken Native” which means odd one out.

Indeed, the budding fighter felt like the odd one out as everyone he knew was seemingly treading the path of studying – more studies and securing a full time paid job.

Disgusted from treading the herd-like path, a 19-year-old Adesanya resolved to ditch studying and pursue his interests in martial arts after he watched the 2003 Thriller/Action movie, ‘Ong-Bak’ in the year 2008.

“I remember seeing the movie ‘Ong-Bak’, starring Tony Jaa. He was doing all this crazy (expletive) and I’m just like, ‘(expletive) – that’s cool. I want to be a fighter”. He revealed.

The teenager got himself trained in Muay Thai for a year and stubbornly went against his coach’s (Derek Broughton) will to have his first and last amateur MMA fight with a certain Neroni Savaiinaea in 2009.

Although Adesenaya lost the fight, he didn’t miss the lesson of the experience.

It showed me I had a lot to learn in MMA, but at the same time, I didn’t get hurt or get submitted badly. It has in no way deterred me from a career in the sport. He admits.

Undeterred by his first loss, Adesanya moved to Auckland where he submitted himself to the tutelage of a new trainer Eugene Bareman.

Adesanya was no stranger to Eugene prior before the latter accepted him for training.

Eugene was in fact, at Adesanya’s corner during his failed amateur MMA fight and resolved never to have dealings with the stubborn fighter.

As a result, when Adesanya came seeking training at Euguene’s gym he tried hard to reject the application but eventually accepted him.

“He was reluctant at first. Maybe it was flashbacks to that first fight; ‘Not this shit again’. He tried to shoo me away, tried to guide me to other gyms.

I was like, ‘Nah – I’m good right here. This is where I want to be”. Adesanya disclosed.

Eugene worked with Adesanya to help him master the elements of boxing and kickboxing.

Although Adesanya recorded a few losses in the aforementioned combat sports, he worked extremely hard to avoid further losses after starting his professional MMA career in 2012.

Adesanya remained relatively unknown despite recording 11-0 MMA wins between 2012 to 2017. However, things took a different turn in December 2017 when he got signed to UFC.

Within the space of one year and a few months, Adesanya established himself as the next big thing in UFC by increasing his MMA records to 16–0. The rest, as they say, is history.

Who is Israel Adesanya Dating?

Following Adesanya’s rise to fame, many have been wondering who is the girlfriend or woman behind his success.

Yes, he does have a winning spirit coupled with a fast increasing net worth that makes ladies want to own him.

Notwithstanding, Israel might be possibly single as there are no records of his relationship life. In addition, he’s seeming focused on transitioning from new kid to king in the block at the UFC.

Adesanya was born into a family of 7. we bring you factual details about members of his family.

Femi Adesanya is Isreal’s dad. The father of 5 is an accountant who hails from Odogbolu, Ogun State, Nigeria.

Femi has been of tremendous support to the fighter ever since he made up his mind to build a career in Combat sports.

Taiwo Adesanya is Israel’s mom. Like most mother’s, Taiwo is a caring mum who has not withdrawn her maternal care from the fighter, regardless of the fact that he has advanced with age.

In addition, she’s the only woman that can strike fear in Adesanya or make me feel like the greatest of all time.

Adesanya has 5 siblings, of whom little is known about other than the fact they work as accountants or nurses.

Here are some interesting facts that define Adesanya’s personality.

Adesanya practices self-motivation by speaking uplifting words to himself.  The practise was adopted by the fighter during his high school days when he was picked on and bullied by kids bigger than him. Speaking about the practice Adesanya advises that:

“You can’t be self-deprecating when everyone else is trying to s*** on you. You have to be able to talk to yourself in the right way”.

He is proud of his Nigerian roots and has a tattoo of Africa on his body with Nigeria outlined. On top of the map is the inscription “Broken Native”, a catchphrase that reminds him of his uniqueness.

Adesanya has a good command of English, Pidgin English and Yoruba languages. Below is a video that captures Adesanya exhibiting his mastery of the aforementioned languages. Credit to UFC – Ultimate Fighting Championship.

He loves and admits to missing Nigerian delicacies like Suya, Eba, amala and Efo Riro, Kilishi, Garri and Kulikuli.

Adesanya does not practice any religion but appreciates the artistry and uniqueness in different religions. According to him:

“I don’t practice any religion or follow any code but my own. I have the emotional capacity to appreciate the artistry and many other things from different religions, cultures, cliques…etc”. 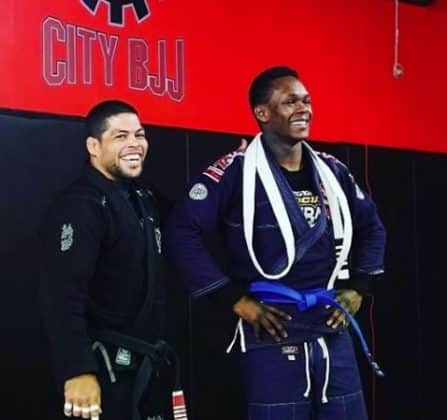 His nickname “The Last Style Bender” was coined from the TV show, Avatar. “The Last Air Bender” (Avatar) mastered the control of fire, water, air and earth. Likewise, Adesanya is on a quest to master all the elements of martial arts.

At ChildhoodBiography, we strive for accuracy and fairness in our quest to deliver you the Biography of Mixed martial artists.

Kindly stay tuned for more of our related articles here. You may find some interest in the childhood story of Islam Makhachev, Ciryl Gane, Gilbert Burns and Charles Oliveira.