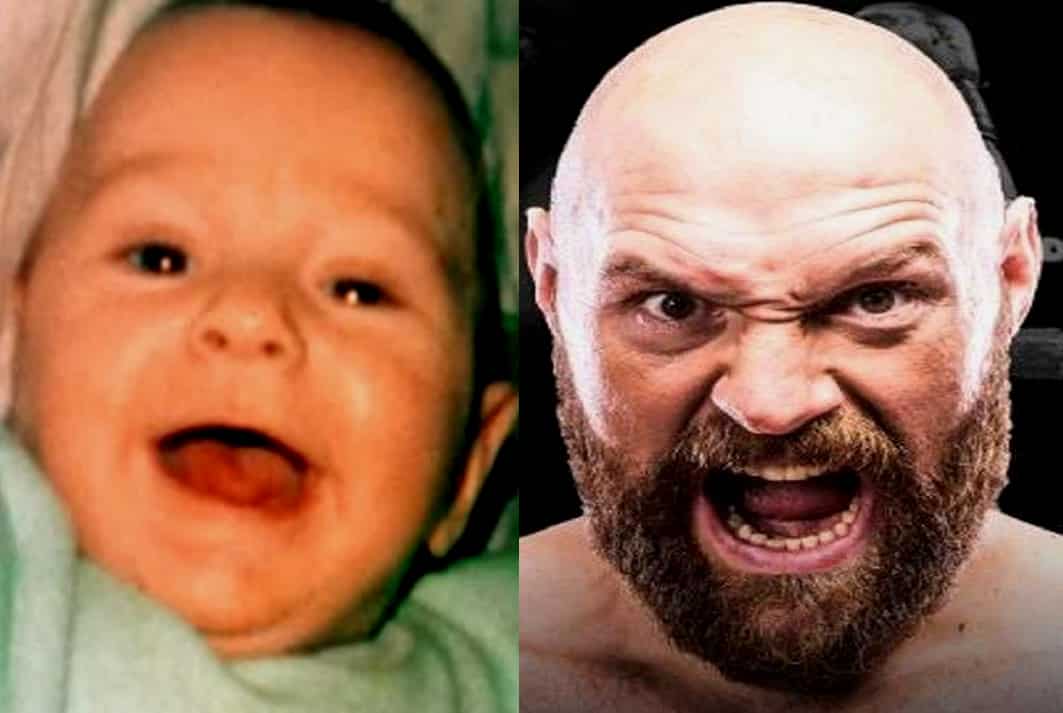 ChildhoodBiography presents the Full Story of a British professional boxing Legend best known by the nickname “The Gypsy King“.

Our version of Tyson Fury’s Biography Facts and Childhood Story brings you a full account of notable events from his Early Days to date.

Yes, everyone knows he is one of the best fighters in the heavyweight division. However, only a few consider Tyson Fury’s Biography, which is quite interesting. Now, without further ado, let’s begin.

For Biography starters, Tyson Luke Fury was born on the 12th day of August 1988 at Wythenshawe, in Manchester, England.

The Legendary British Boxer was the eldest of two children born of the union between his little known mother and his father, John Fury Sr. Behold, one of Tyson Fury’s parents – his Dad.

The British and Irish national of white ethnicity with European roots was born three months premature and weighed just 1lb at the time of birth.

In fact, Baby Fury’s chances of survival were slim. However, his parents’ unwavering faith and good medicare saw him record healthy growth until he was considered mature to be discharged from clinical care.

In the light of his awesome survival, Fury’s parents named him “Tyson” after the then boxing undisputed champion, Mike Tyson and raised him at the village of Styal, in Wilmslow, England where he grew up alongside his younger brother Tommy.

Growing up at the village of Styal, it was nearly impossible for young Fury to ignore boxing. His father, John Fury Sr was at the time a professional boxer who often took him to the gym for practice.

It wasn’t long before John put gloves on young Fury and took notice of the youngster’s natural talent for the sport.

Fury was educated at an unnamed school in the village of Styal, near Wilmslow, England. While at the school, the boxing prodigy learned the basics of reading and writing before he stopped going to school when he was only 10 years of age.

It is worthwhile to note that Fury did not quit school because of bullying and academic pressure.

The 10-year-old rather left school after his early engagements in boxing made him realize that he needed more training periods to make a career out of the sport and excel in it.

The history of Fury’s early career in boxing dates back to the early 2000s when he represented both England and Ireland in different competitions as a fast-rising and ambitious amateur boxer.

His significant achievements during the period include winning a bronze medal at the AIBA Youth World Boxing Championships held in 2006. In addition, Fury won the EU Junior Championship representing England in 2007.

At the peak of his Amateur boxing career, Fury sought to represent Great Britain at the 2008 Beijing Olympics but was denied of the opportunity because each country was restricted to fielding one boxer per weight division and Britain wasted no time in selecting a certain David Price who was a member of her amateur Olympic programme.

Moving on, Fury turned to Ireland for the Olympic “qualification ticket” but was again met with disappointment.

He only derived a bit of consolation from winning the 2008 ABA super-heavyweight title and turned professional that same year.

Fury made his professional debut in a winning effort against Hungarian fighter Bela Gyongyosi in December 2008. Seemingly unstoppable, he went on to rack up an impressive record of 24-0.

He rose to fame on his 25th fight by defeating Wladimir Klitschko during a world heavyweight title showdown in July 2015.

Fast forward to July 2019, Fury stays atop of his boxing game with his latest victory being a technical knockout of German boxer Tom Schwarz in the second round of a thrilling fight held at Las Vegas on the 15th of June 2019.

The fight came just a few months after Fury recorded a draw in his bout with Deontay Wilder on December 1st 2018. Thus, he has a record of a 28–0–1 at the time of writing.

Fury is married at the time of writing. We bring you facts about his dating history and marital life.

To start with his dating history, Fury is not known to have had any girlfriend before he met his wife, Paris Fury.

Paris and Tyson met at a mutual friend’s wedding party when the former was a teenager. They dated for a while before getting married in 2009.

Their ever romantic union is blessed with 4 sons and 1 daughter at the time of writing. They include Prince John James, Venezuela, Prince Tyson Fury II, Valencia Amber and Prince Adonis Amaziah.

Tyson Fury comes from a middle-class family background. We bring you facts about his family life.

John Fury Sr is Tyson’s father. He loves boxing and started out as a bare-knuckle fighter as well as an unlicensed boxer before turning professional.

Renowned for defeating WBO World Champion Henry Akinwande in the ’80s, Fury took it upon himself to introduce his sons to boxing and keeps mentoring them till date.

Fury’s mom is one that desires to live a private life. As a result, little is known about her beyond the fact that she was born in Belfast, Northern Ireland. Nevertheless, she cherishes her sons and shares a close relationship with them.

Fury’s younger brother is Tommy. He is also a professional boxer and has won his first two fights at the time of writing.

Other than Tommy, Fury has two half-siblings born to his father from another relationship. They are identified as John Jr and Shane Fury.

Away from Fury’s immediate family, little is known about his paternal grandparents as well as his maternal grandfather and grandmother.

He has an uncle identified as Peter Fury as well as cousins; Hughie Fury, Hosea Burton and Andy Lee. There’s not much known about Fury’s nieces and nephews while his aunts have not been identified in notable events of his early life till date.

Sit back as we bring you makings of his personality to help you get a complete picture of him. To begin with, Fury’s persona is a blend of Leo Zodiac traits.

He is, romantic, extroverted, resilient, energetic and open to revealing details about his personal and private life. His interests and hobbies include training at gyms, singing, watching movies as well as spending time with his friends and family.

Speak of Fury’s romantic traits and singing hobby, they are unique aspects of his character that he exhibits for his family and fans at any given opportunity like in June 2019 when he broke into song –

Tyson Fury has an estimated net worth of over £30m at the time of writing. The origin of his wealth stems from his boxing endeavours and TV deals, while analysis of his spending patterns reveals that he lives an eccentric luxurious lifestyle.

Not one to miss an opportunity of flaunting his wealth, Tyson lives with his family in a house that overlooks Morecambe Bay and reportedly spent £500k on extending it.

He also has a mysterious Marbella mansion that looks more like a small castle. Though Fury has not shared any other photo about the house, it has been valued to be not less than £6m.

The Versace-wearing boxer also exhibits his classical and expensive taste in rides by owning a car collection that includes rollers and Ferraris.

To wrap up our Tyson Fury Childhood story and biography here are lesser or little-known facts that are hardly included in his bio.

Fury has not been seen smoking but he is given to drinking and once opened up to using Drugs in 2016.

The heavyweight boxer has no tattoos at the time of writing but appreciates fans who get a tattoo of him.

In 2018, Tyson attempted suicide by driving his Ferrari at 190mph towards a bridge. While Fury was at it, he had a rethink and thereafter sought professional help to help him cure depression.

Regarding his religion, Fury was born and baptized Catholic. He still practices the faith with his wife and children and was once spotted wearing a massive praying chaplet.

He has been involved in charitable endeavours and serves as an Ambassador for the Mental health charity – The Frank Bruno Foundation – at the time of writing.

Thanks for reading our Tyson Fury Childhood Story, plus untold biography facts. At childhood biography, we strive for accuracy and fairness.

Asides from Tyson Fury’s Bio, we have other Boxers’ childhood biography stories for your reading pleasure. The Life History of Canelo Alvarez, Sergey Kovalev, and Manny Pacquiao will interest you.

Absolutely love Tyson Fury and his beautiful wife and children.
I follow Tyson I have joined many groups and was happy to
be asked if I would like to become admin of course I accepted

I share many photos of him and his family long live the King Tyson Fury.