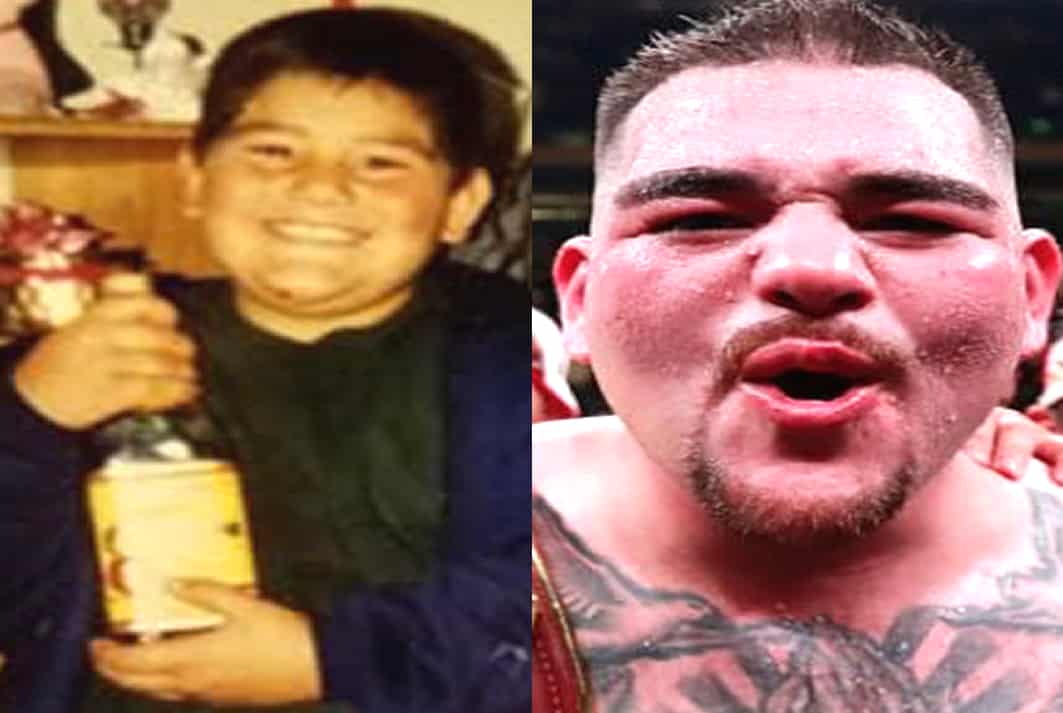 Childhood Biography presents the Full Story of a Mexican-American Boxer with the nickname “The Destroyer“.

Our version of Andy Ruiz Jr’s Biography and Childhood Story brings you a complete account of notable events from his childhood.

Yes, everyone knows of his non-athletic physique with fast hands. However, not many boxing fans have read Andy Ruiz Jr’s Biography, which is quite interesting. Now, without further ado, let’s begin.

For starters of his Biography, Andrés Ponce Ruiz Jr was born on the 11th day of September 1989 at Imperial Valley in California, U.S.

Andy Ruiz Jr was one among four children born to his mother, Felicitas and to his father, Andrés Ruiz Sr. Behold his lovely parents.

Do you know that Ruiz was raised close to Mexico’s border at Brawley in California where he grew up alongside three little known sisters?

Growing up at Brawley, Ruiz was a chubby but hyperactive kid who was fond of breaking things and getting into trouble.

By the time Ruiz was aged six, his dad figured out that their household would never know peace if “The Destroyer” does not find a productive outlet to channel his aggressive energy.

Thus, Ruiz was forcefully enrolled in a gym not considering the fact that he wanted to become a baseball player.

While at the gym, Ruiz started out with karate but soon lost interest and transitioned to boxing.

Ruiz’s first two weeks of trying out boxing was a baptism of fire. The then 6-year-old was beaten up badly but never quit the sport because his dad convinced him that things would only get better.

Indeed, things got better for Ruiz as he went on to make his first amateur fight as a 7-year-old in San Diego where he fought a 12-year-old because there were no 7-year-olds that weighed as much as he did.

Then a few years down the line, fighting older kids proved to have downsides when a 10-11-year-old Ruiz had the impetus to fight cops in attempt to evade arrest for hanging out with gang members and drug peddlers.

At the peak of his aggressive misdemeanours, Ruiz was expelled from high school for fighting, a development that gave the boxing prodigy an opportunity to concentrate on amateur boxing.

Backed with an impressive amateur record of 105-5 including two gold medals at the Mexican National Junior Olympics, Ruiz represented Mexico in the 2008 Olympics qualifiers but failed to qualify after losing to Robert Alfonso and fellow heavyweight contender, Oscar Rivas.

Undeterred by the development, Ruiz turned pro in 2009 and made his professional debut in a winning effort against Miguel Ramirez on the 28th of March 2009.

Thereafter, it was victory after victory for Ruiz before challenging times stared the boxer in the face and made him think about his future in boxing.

Speaking of the challenging times, Ruiz witnessed the death of his friend, Frankie Leal who died after being knocked out in a 2013 boxing bout.

Prior to Frankie’s death, Ruiz had also lost an age-long friend, Alejandro Martinez who succumbed to death after going through a 37-month boxing induced coma from a 2009 fight.

Three years after Frankie’s death, Ruiz recorded his first professional defeat when he fought Joseph Parker for the vacant WBO title in December 2016.

Unhappy with his defeat Ruiz took out time to figure what he didn’t do right as well as resolved to make the loss his last.

Rising above the only loss on his pro ledger, Ruiz won his next three fights and secured a bid to face Anthony Joshua after the latter’s contender, Jarrell Miller failed a series of drug tests that saw to his pullout from the fight.

Prior to the bout, odds were in favour of a ‘Joshua victory’ given that Ruiz looked slobby when compared to his athletic opponent.

However, Ruiz proved to be the perfect embodiment of an underdog as he upset and stripped Anthony Joshua of his WBO, WBA, IBF and IBO belts.

With the sensational victory, Ruiz became the second Latino and the first person of Mexican descent to become world heavyweight champion. The rest, as they say, is history.

The Boxer is married at the time of writing this bio. We bring you facts about his dating history and marital life.

To start with, the Mexican is not known to have dated any woman or had girlfriends before he met his little known wife named Julie.

Notwithstanding, her marriage with Ruiz has given rise to the birth of two sons and two daughters as well as a little known additional child.

Their older son is named Andy Ruiz iii while the older daughter goes by the name Bella Ruiz. On the other hand, the younger son and daughter are Richie Ruiz and Beverly Ruiz respectively.

Andy Ruiz comes from a middle-class family background. We bring you facts about his family life as well as outline available records of Ruiz’s ancestry beginning with his parents.

Andrés Ruiz Sr is the boxer’s dad. He is a Mexican who immigrated from the border town of Mexicali in Mexico to Imperial Valley in California where Andy was given birth to.

The supportive father who maintains a close relationship with Ruiz is credited for introducing him to boxing as well as curtailing the then-youngster excesses whenever he erred.

Felicitas is Andy Ruiz’s near-look-alike-mom who has been of great support to his impressive career.

She has watched most of his games and even put up an appearance at Madison Garden in New York City during Ruiz’s shocking victory over Anthony Joshua.

Ruiz grew up with three sisters whom little is known about at the time of writing.

Nonetheless, it is believed that they had a good early life and have not grown apart from one another.

While Ruiz’s sisters are yet to be fully identified with the boxer, it is important to note that the boxer also has a younger brother whom little is known about.

Moving on to Andy Ruiz’s relatives of extended family life, there are no records of his paternal grandparents as well as maternal grandfather and grandmother.

Similarly, Ruiz uncles, aunts, cousins, nephews and nieces have not been identified in notable events from his early life to date.

What makes Andy Ruiz Jr tick?. Sit back as we bring you makings of Ruiz’s personality to help you get a complete picture of him. To begin with, Ruiz persona is a blend of Virgo Zodiac traits.

He is incredibly hardworking, optimistic, have a good sense of humour and rarely reveals information about his personal and private life.

The boxer has a few interests and hobbies that include dieting, eating good food, training, chilling out at expensive resorts as well as spending quality time with friends and family.

Andy Ruiz Jr has an estimated net worth of over £5.36m at the time of writing.

The bulk of Ruiz’s wealth does not stem from a steady stream of wages and salaries but from the huge monies he carts after winning bouts while others take the form of endorsement deals.

Testimonies or evidence of such a lifestyle include Ruiz’s £785k car collection that boasts of expensive rides like a Mercedes G Wagon G550, a Rolls-Royce as well as a Lamborghini Urus.

Speaking of where and how Ruiz resides, he has a huge mansion at California that is estimated to be worth a fortune.

The house which is a home fit for Kings has deluxe rooms, outdoor pool among other luxurious features.

To wrap up our Andy Ruiz Jr childhood story here are little known or untold facts that are rarely included in his biography.

Andy Ruiz has a prominent tattoo on his chest. The body art features hands clasped in prayer mode and surrounded by clouds and roses.

On Ruiz’s right biceps are the heritage-defining words “Hecho En Mexico” which means ‘Made in Mexico’. The boxer who possesses a height of 6′ 0″ also has a tattoo on his back that reads “Victorious”.

Little is known about Ruiz’s religion however the odds are in favor of him being a Christian. More so he once stated that he fears no one but God during the build-up of his fight with Anthony Joshua in June 2019.

Ruiz has been severally spotted drinking moderately but he is yet to be seen smoking. It is general knowledge that the boxer takes his health seriously and wouldn’t do anything to compromise it.

FACT CHECK: Thanks for reading our Andy Ruiz Childhood Story plus untold biography facts. At childhood biography, we strive for accuracy and fairness in delivering you Biography Stories of Professional Boxers.