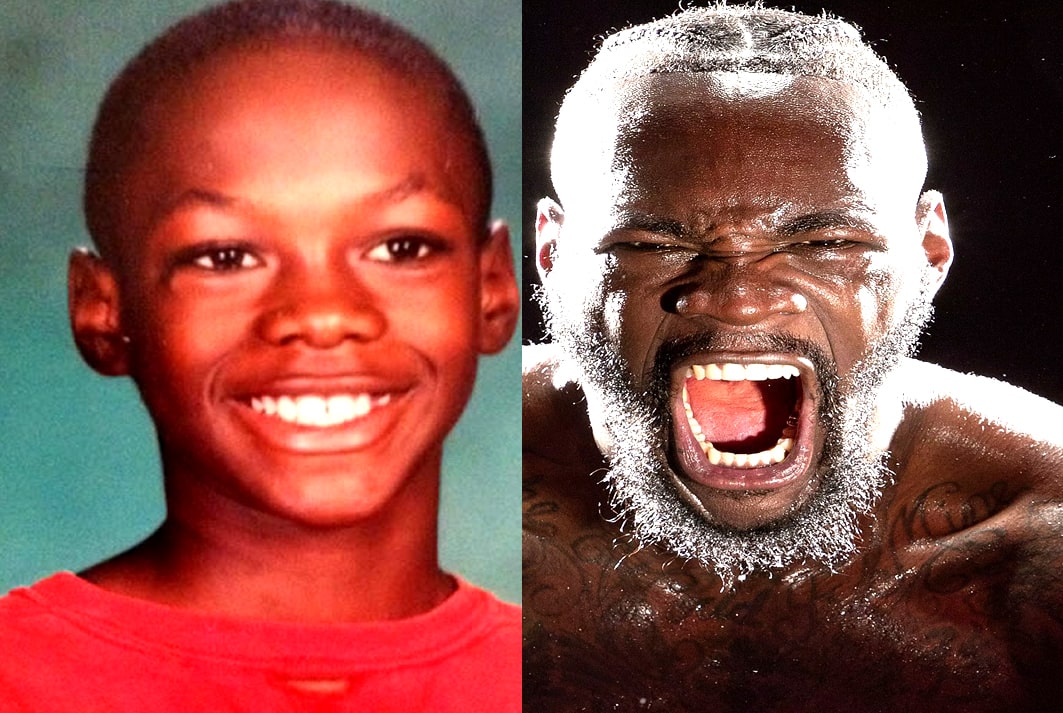 Childhood Biography presents the Full Story of an American Boxer with the nickname “The Bronze Bomber”.

Our version of Deontay Wilder’s Biography Facts, including his Childhood Story, brings you a full account of notable events from his childhood time to date.

More so, Wilder’s Dating history, personal life, family facts, lifestyle and other little-known facts about him.

Yes, everyone knows he is one of the longest-reigning world heavyweight champions.

However, only a few consider Deontay Wilder’s biography, which is quite interesting. Now, without further ado, let’s begin.

For Biography starters, Deontay Leshun Wilder was born on the 22nd day of October 1985 at Tuscaloosa in Alabama, U.S.

Deontay Wilder was one among four children born to his mother, Deborah Wilder and to his father, Gary Wilder. Behold, one of Deontay Wilder’s parents.

The American national of Black ethnicity with Afro-American roots was raised at his birthplace in Tuscaloosa, Alabama, where he grew up alongside a well-known brother – Marsellos and 3 sisters who continue to defend their private lives championship belt. 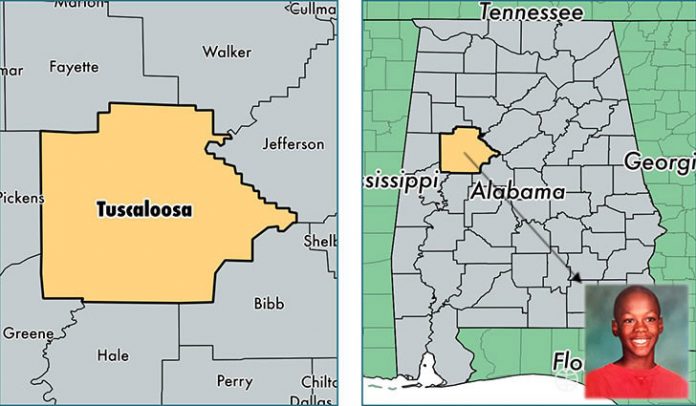 Growing up in Tuscaloosa, Young Wilder was part of a teeming number of youngsters who were obsessed with American football and played basketball as an alternative childhood sport.

Though he loved watching boxing on TV, he didn’t see a future of getting punched in the face.

Wilder attended Tuscaloosa Central High School in his hometown. While at the institution, Wilder deployed his budding athletic strength and increasing height in playing American football and basketball as against bullying and fagging. 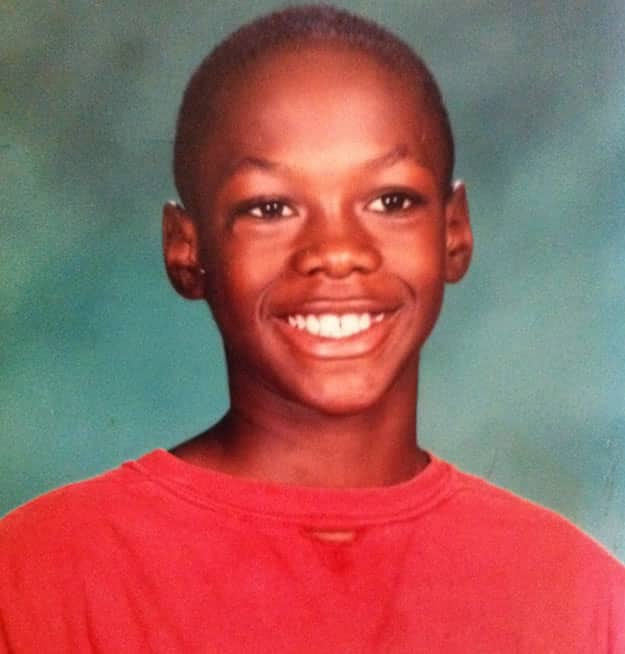 Upon graduating from Central High School, Wilder secured admission into Shelton State Community College, where he soon dropped out after learning that he was just a few months away from becoming a father.

Being an industrious and responsible expectant father, Wilder worked no fewer than 3 jobs and made the decision to embrace boxing as a career sport because he believed that stepping into the ring could make money rain heavier than torrential rainfalls in the Amazon.

Thus, Wilder stepped into the only Gym at Tuscaloosa where he met trainer Jay Deas, a man who upon gazing at Wilder, became saddled with the responsibility of carving out a boxer from the towering 6-7 foot mould of a 19-year-old lucrative job seeker. 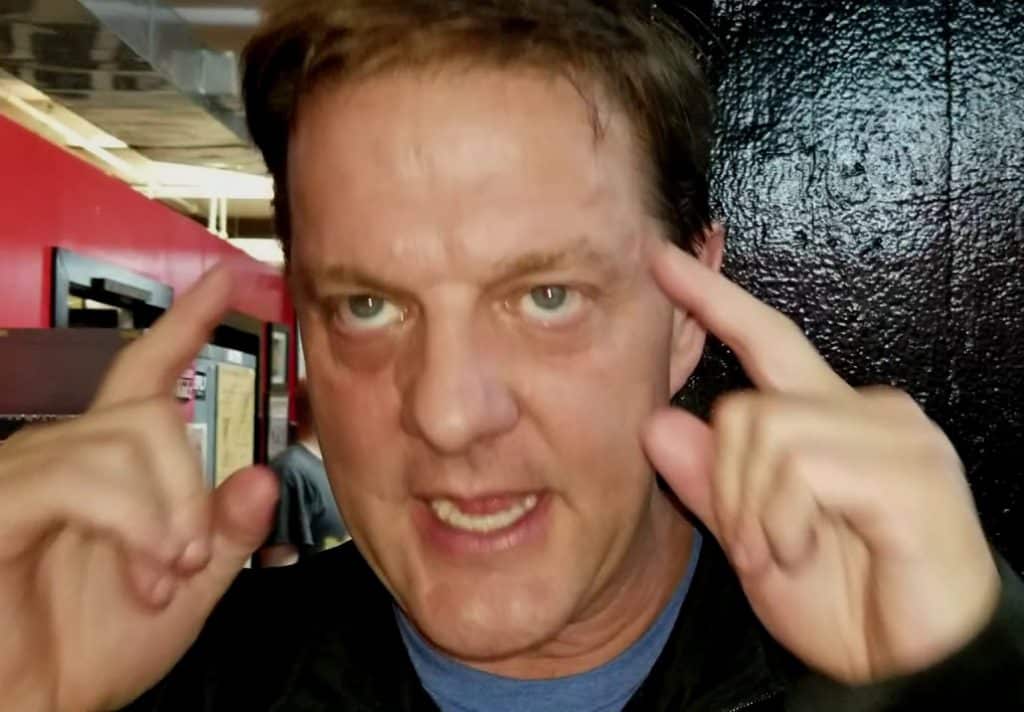 After going through a few weeks of successful drills, Wilder knocked down a pro during a sparing session at the gym, a development that informed the boxing prodigy’s unbridled desire to immediately go pro.

However, Deas made Wilder follow due process by enrolling him at ‘Skyy Boxing Gym’ in Northport, Alabama, where he fought in amateur ranks with aspirations of making it to the Olympics.

Wilder soon realized that boxing required more than knocking out one pro at a gym sparring session.

Although Wilder racked up an impressive career record of 30-5 and qualified for the 2008 Olympics, the boxing prodigy’s inability to edge past Clemente Russo of Italy in the semi-finals of the world event, went down as one of the most challenging periods of his early career.

Notwithstanding, he got a bronze medal and flashed half of a mechanical smile to hide his disappointment. 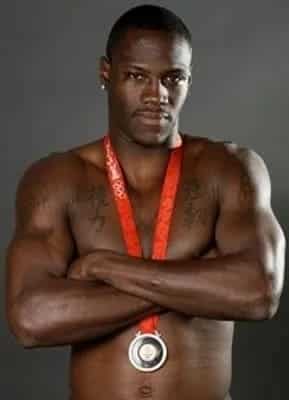 Moving on, Wilder turned professional after being found worthy in punching and character.

He made his debut as a 23-year-old at the Vanderbilt University Memorial Gymnasium in Nashville, Tennessee, where he knocked out Ethan Cox thrice in the second round before the fight was stopped.

While Wilder reveled in the euphoria of clinching his first victory, the non-bloodied stoppage was to the dismay of sports journalists who had already pictured creepy headlines.

Professional after professional, every boxer that faced Wilder got their fair share of his fury while he grinned at his perfect stats.

At the peak of his uninterrupted ascendancy, Wilder defeated the then-unbeaten Kelvin Price in December 2012 to win the vacant WBC Continental Americas heavyweight title and went on to add the WBC heavyweight title to his collection by beating Bermane Stiverne in January 2015. 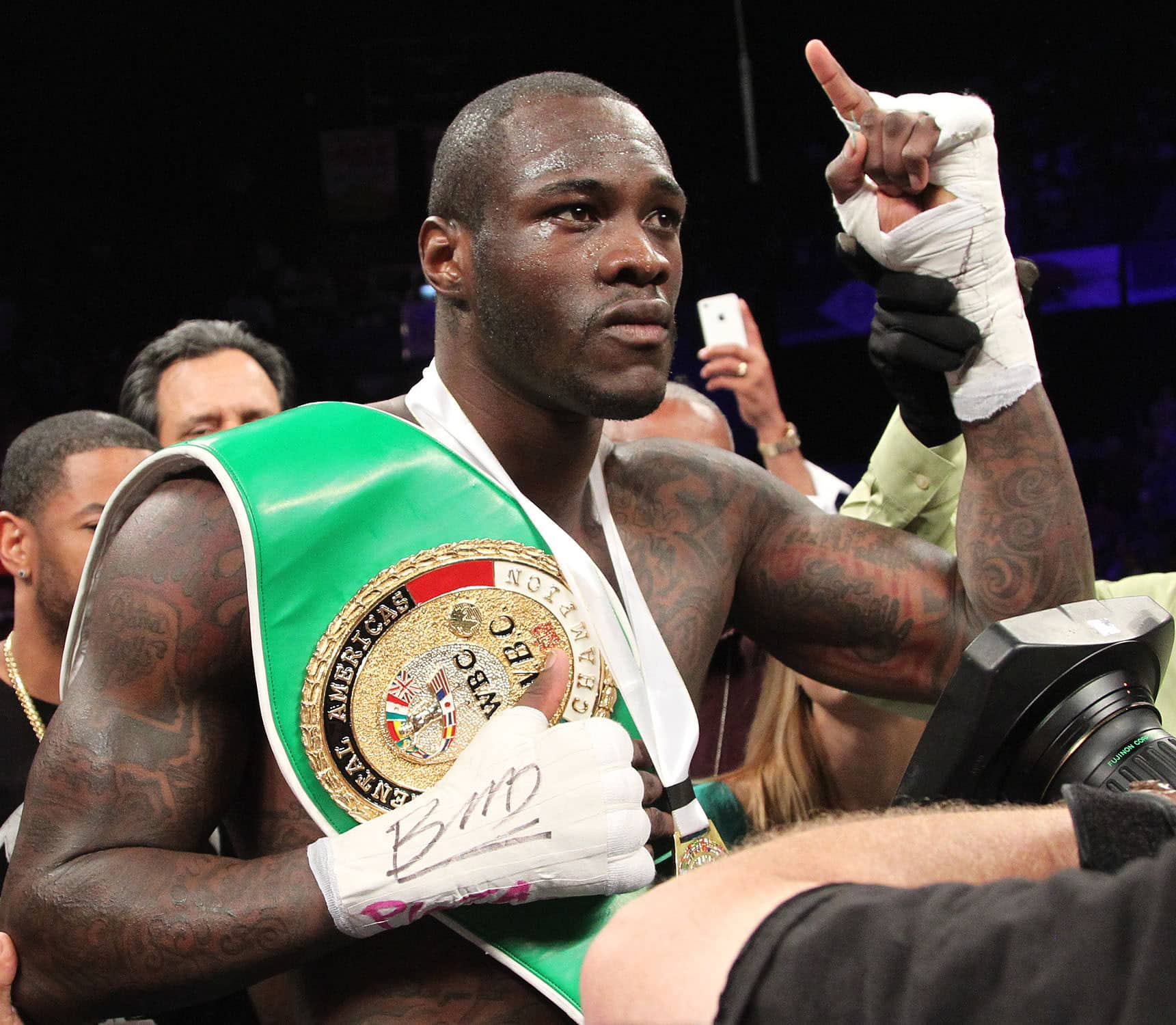 Fast forward to date, Wilder is ranked as the world’s second-best active heavyweight and has an impressive professional boxing record of 41–0–1 with his latest victory being a technical knockout of Dominic Breazeale in May 2019. The rest, as they say, is history.

Starting off, Deontay Wilder has once been married to the mother of his first four kids – Jessica Scales.

Theirs was a romance that started before the boxer thought of embracing the lucrative sport that he dominates at the time of writing.

Before tying the knot in 2009, the now estranged couples had their first child Naieya.

She was a blessed daughter whose gestation period and birth made Deontay take boxing seriously in order to obtain the money needed for surgeries to correct her pre-birth defect condition known as spina bifida.

Today, Naieya is healthy and plays the role of a big sister to her three biological siblings Ava, Deontay Jr and Dereon. 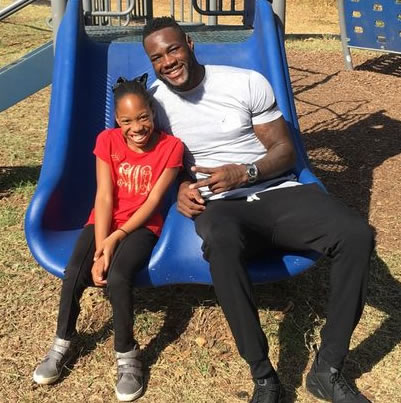 Deontay and Jessica got divorced after being married for 8 years. With the former moving into a public relationship with reality television star, Telli Swift.

The lovebirds who were rumored to be dating since 2015 are engaged and have a daughter together – Kaorii Lee (born March 2011).

Like Wilder, Telli was previously married and has a son – Kerron with her ex-husband. She was a model before becoming a reality star and helped set up the Boxing WAGS Association to help children and families. 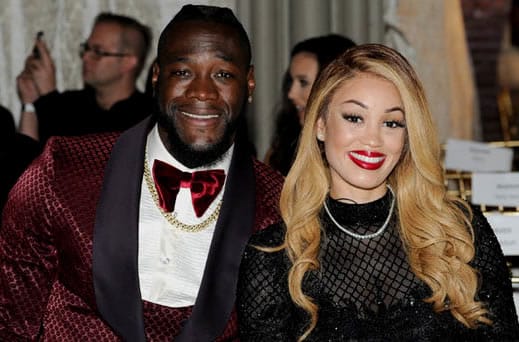 Unlike most professional boxers, Wilder is of a middle class and non-dysfunctional family background. We dissect the makeup of his family life.

Gary is Wilder’s father. He ruled over the affairs of the family as a disciplinarian, instilling in Wilder the habit of working hard and rising above peer pressure.

Wilder grew up in that regard and considers the ever-supportive Gary as a strong figure in his life.

Deborah is Wilder’s mom. She helped raised the boxer until he was aged 17 and ensured that weekly church attendance was an integral part of his upbringing.

The mother of five is supportive of Wilder’s choice of career and appreciate the fact that the world heavyweight champion works hard to serve as an inspiration to many.

Wilder has three little known elder sisters and ranks as the second child. The boxer’s only known sibling is his younger brother Marsellos who also choose to make a career out of boxing.

Though not yet successful as Wilder, Marsellos is rising through the ranks would not stop at anything until he becomes a second “Wilder world champ”. 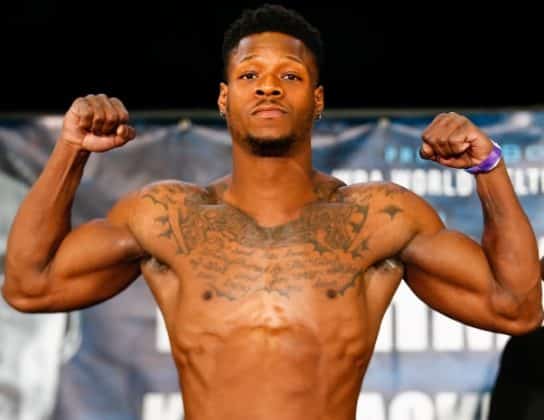 Not much is known about Wilder’s extended family members. Including his paternal and maternal grandparents as well as uncles and aunts.

Similarly, the boxer’s cousins, nephews and nieces have not been caught in the web of information technology.

Wilder has a unique type of personality that makes him strike many as cocky. However, being cocky is a special kind of confidence. Something that has come a long way to be established as the boxer’s persona.

In addition, Wilder exhibits Libra Zodiac traits of altruism, responsibility and hard work. He also has no problems with revealing details about his personal and private life to inform and inspire.

Speak of the boxer’s interests and hobbies, they include playing basketball. Also, keeping up with American football, acting, watching movies. Again, kayaking and spending time with his friends and family. 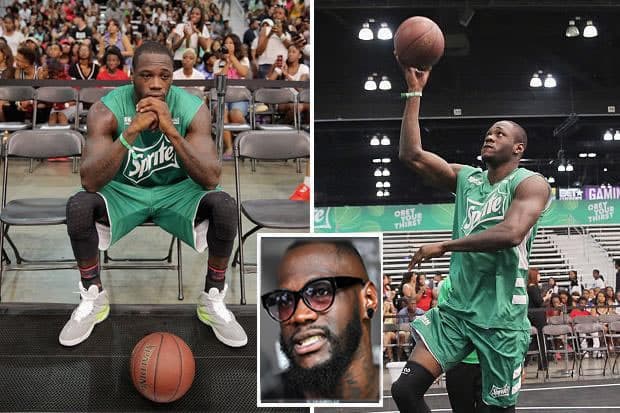 Wilder has an estimated net worth of over ‎$20 million at the time of writing. Constituents of his impressive wealth take their origin from millions of dollars he takes home after winning fights.

As such, luxury is not alien to the boxer. A man who knows how to spend and invest in worthwhile endeavours. Like acquiring expensive estates to the tune of millions of dollars.

Notable among such luxurious properties is his Tuscaloosa residence that has deluxe rooms and exotic features.

The house also serves as the parking point for Wilders’ cars collection. A collection that boasts rides like a huge metallic Hummer. A grey and gold convertible Lamborghini, and a convertible Rolls Royce. 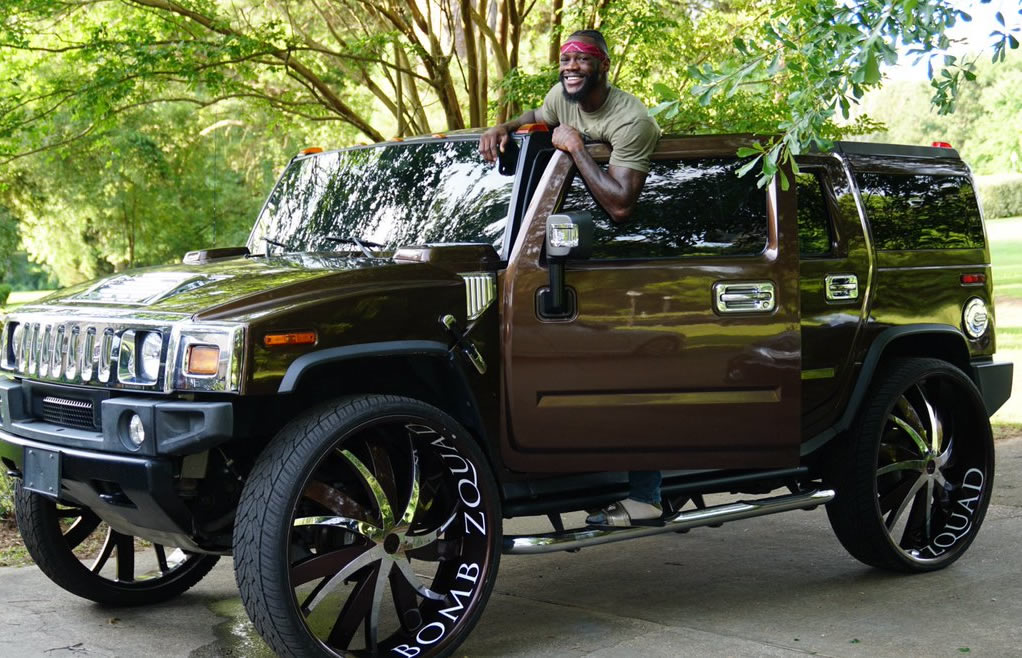 To end our Deontay Wilder childhood biography, here are untold facts. That you never knew about him.

Wilder adopted his nickname “The Bronze Bomber” after winning a bronze medal in the 2008 Olympics.

He also coined the “Bomber” appendage after veteran American heavyweight boxer – Joe Louis who was nicknamed “The Brown Bomber”. 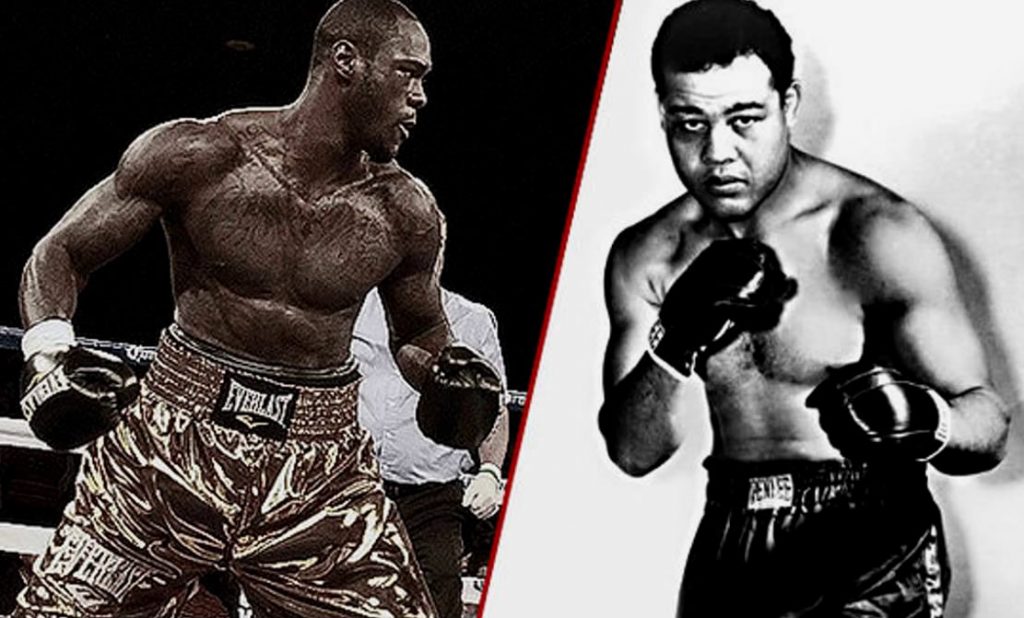 Wilder was born and raised as a Christian. He still practices Christianity and acknowledges that God is very important in his life.

More so, he harps on the need for people to believe in the unseen stressing that the vital things of life like air and love cannot be seen.

The boxer has several tattoos which tell his life story. Thus, there’s no end in sight to the number of body arts Wilder can possess. As he keeps getting new life experiences by the day. 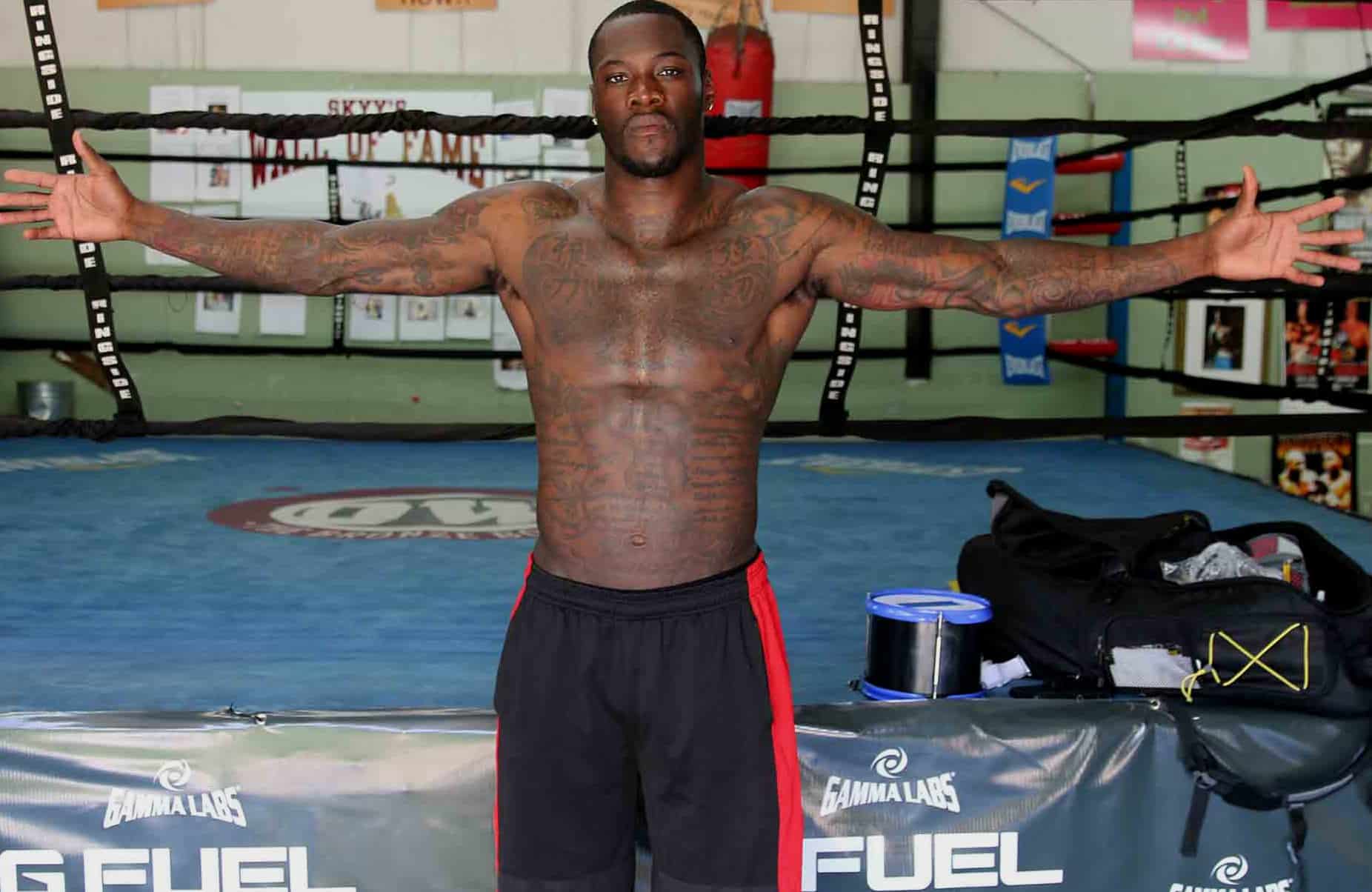 Thanks for reading our Deontay Wilder Childhood Story plus untold biography facts. At childhood biography, we strive for accuracy and fairness while delivering the Biography of Boxers.

Asides from Deontay Wilder’s Bio, we have other Boxers’ childhood biography stories for your reading pleasure. The Life History of Manny Pacquiao, Jarrell Miller, and Andy Ruiz Jr will interest you.