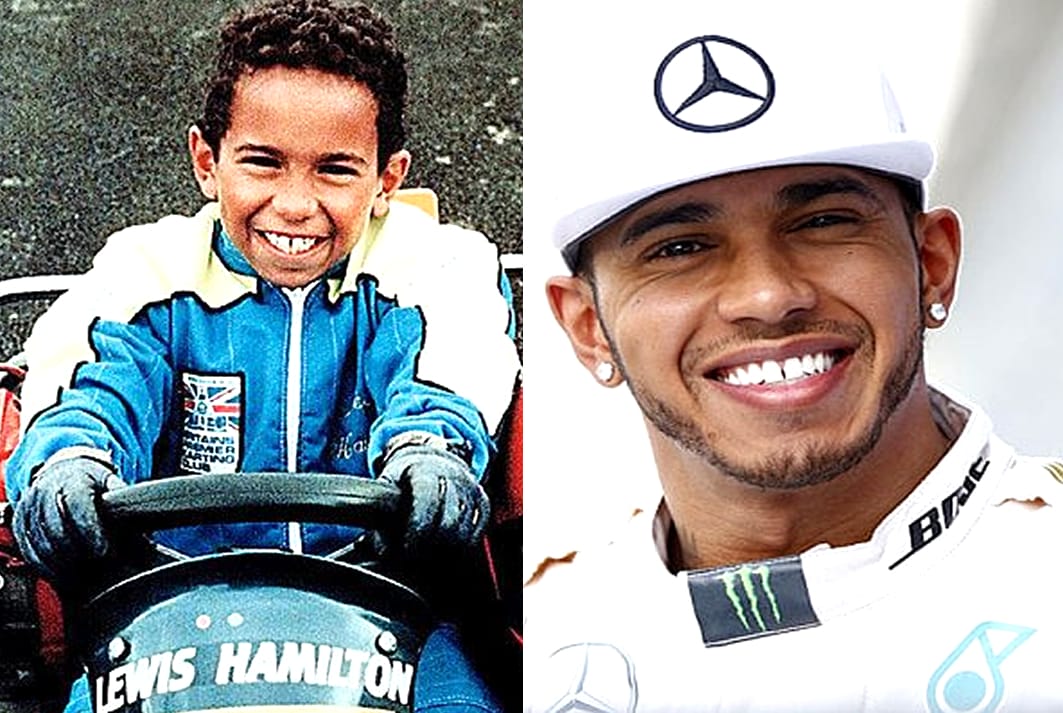 Our Lewis Hamilton Biography tells you Facts about his Childhood Story, Early Life. More so, Lewis Hamilton’s Parents, Family, Girlfriends/wife to be. His Lifestyle, Net Worth and Personal Life.

In a nutshell, we give you the Full History of Lewis Hamilton. A British racing driver who is best known by the nickname “Billion Dollar Man”.

It begins from his early days, to when he became famous with Formula One. We’ll give you a taste of the engaging nature of Lewis Hamilton’s Bio.

Yes, everyone knows about his successive domination in Formula One racing. One which is comparable to Michael Schumacher.

However, only a few consider Lewis Hamilton’s Biography, which is quite interesting. Now, without further ado, let’s begin.

For Biography starters, F1 Legend Lewis Hamilton was born on the 7th day of January 1985. His birthplace is in Stevenage, United Kingdom.

Lewis Hamilton was born to his father, Anthony Hamilton -a black-British. And to his mother, Carmen Larbalestier – of full British descent – (both pictured below).

Growing up at Stevenage young Hamilton never enjoyed the simultaneous company of his father and mother owing to the fact that both parents separated when Hamilton was only 2 years old.

Considering how tender Hamilton was at the time, his father decided to let him live with his mother but never ceased to shower fatherly affection on him including gifting him a radio-controlled toy car, a gift which would later ignite Hamilton’s passion for racing and by extension rise to fame. 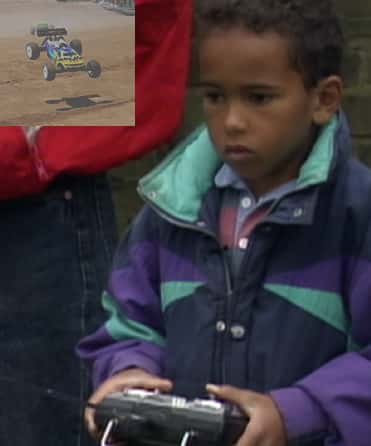 However, Hamilton’s journey to fame was not swift, but progressive. After having considerable playtime with the radio-controlled toy car, Anthony gave his son’s passion for racing a boost by gifting him a Go-Kart, which gave him a much real racing experience. 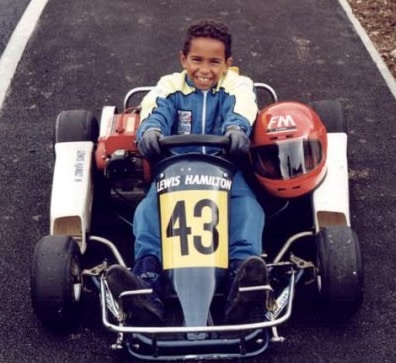 Having a Go-Kart opened doors for a competition which Hamilton utilized by competing in Kart Circuits. It all began from the Rye House Kart where he proved himself as a racing prodigy to watch out for by winning championships.

The winnings did not only earn him local popularity but influenced his decision to major in racing as against football, a sport he actively participated in at the John Henry Newman School with hopes of becoming a professional. 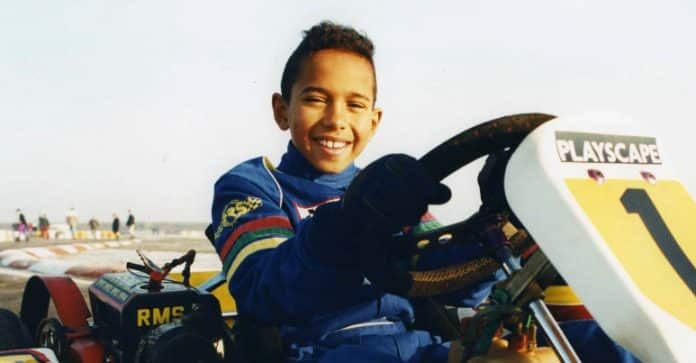 Armed with innumerable Karting titles which saw him named Karting player of all times (an unbeaten record he still holds), Hamilton was confident of what life had in stock for him in racing and sought advancement into Formula Renault. 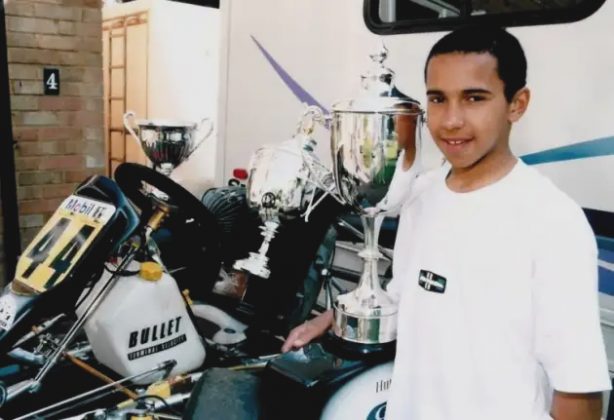 Although Hamilton made his foray in Formula Renault in 2001 when he was aged 16, events that enabled him to get into the championship was his confidence (induced by numerous karting titles) to introduce himself to McLaren team boss Ron Dennis at an award ceremony when he was aged Nine in 1995.

An introduction that Hamilton would live to remember years after:

“Hi. I’m Lewis Hamilton. I won the British championship and one day I want to be racing your cars.”

Ron Dennis (pictured below with Hamilton at the time of introduction) was stunned by the confidence with which Hamilton exuded and foresaw a bright future in the lad.

Consequently, he ensured that the racing prodigy enjoyed the support of the McLaren team, which in 2001 offered him the opportunity to take a significant step in his racing career by competing in Formula Renault. 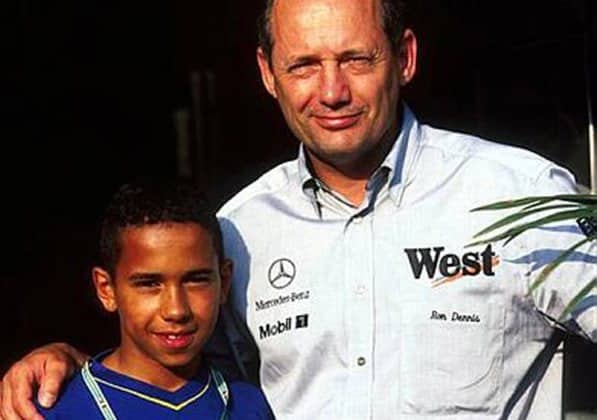 Hamilton proved that McLaren’s patronage which included financial support and a bright prospect for competing in formula one was worthwhile as he finished fifth in the 2001 British Formula Renault Winter Series, came third in the 2002 Formula Renault UK campaign and finally won the championship in 2003. 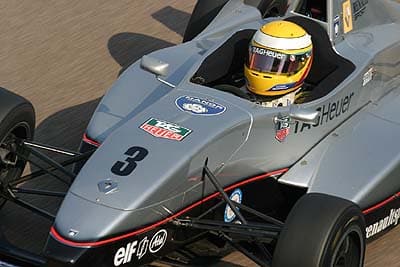 Subsequent racing competitions saw him rise through FormulaThreee, GP2, and kicked started his Formula One career with McLaren in 2007, finishing second in his debut season and winning the title the next season. The rest, as they say, is history. 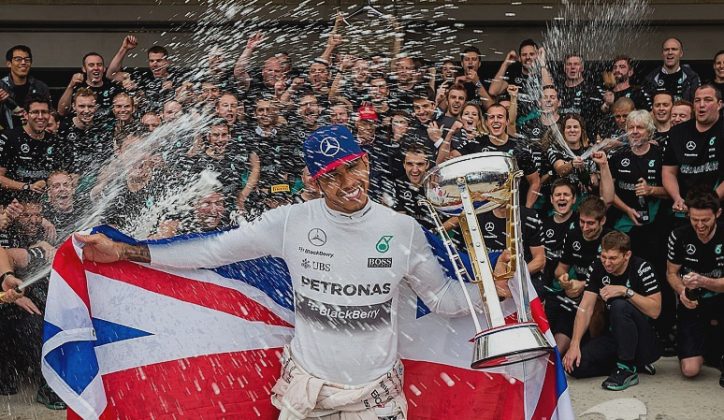 One might not be wrong to attribute Hamilton’s series of failed relationships to his parent’s failed marriage. The racing genius has had great difficulties in trying to make his relationships work. The harder he tries, the more it fails.

Lewis started his relationship with the lead singer of the American girl band, Pussycat Dolls, Nicole Scherzinger in November 2007 but broke up in January 2010 for the purpose of having time for their individual carers.

However, they were seen together at the 2010 Turkish Grand Prix and at the Canadian Grand Prix in Montreal on the 13th of June 2010, sparking speculations that they were back together. 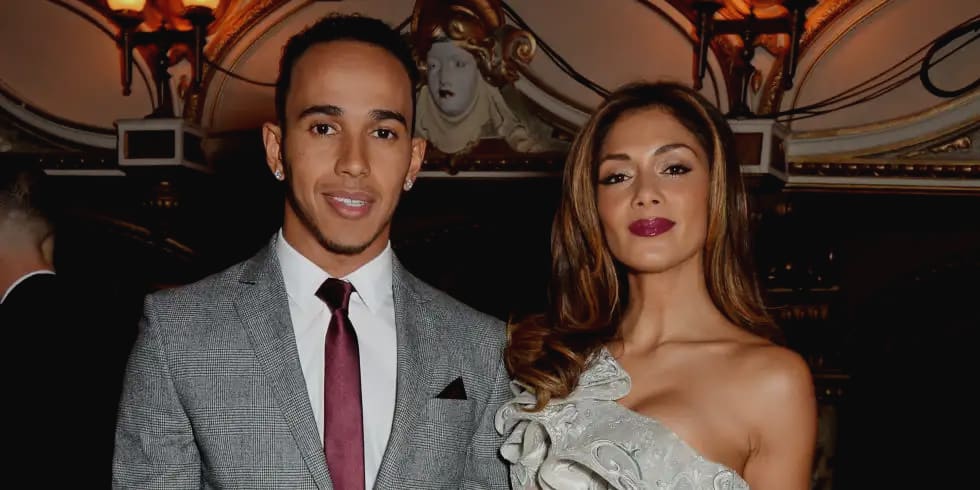 After a series of “break-ups and make-ups” that ensued between 2011 and 2013, the couple finally broke up officially in February 2015. Describing his cars as his babies, Hamilton admitted that his passion for racing comes first, which is undoubtedly why he split with Nicole.

Other Notable female personalities that have once put up with Hamilton’s divided attention during romantic stints with him include Jodia Ma, his Chinese first love whom he dated back in college.

They dated for four years, until June 2007, when they finally parted ways including American singer Rihanna, 18-year-old Model Sofia Richie, and Winnie Harlow amongst others.

To start with, Lewis Hamilton’s family life is just as complicated as his relationship life. Sit back as we walk you through his labyrinth of family ties.

To start with, Anthony Hamilton, the father of Lewis Hamilton, is black British. He has always been supportive of his son’s ambition and career as a car racer.

Anthony Hamilton has been Lewis’ personal manager from 2008 until early 2010, when Lewis ended his working relationship with his father and signed a new management deal with Simon Fuller‘s firm XIX Entertainment in March 2011. 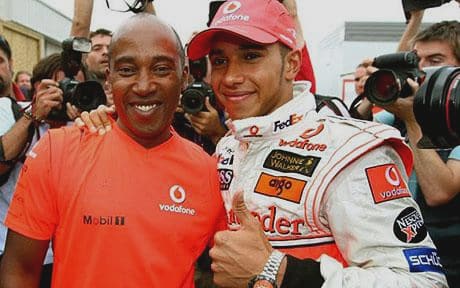 In a funny twist of events, Lewis has got two mothers. One, his biological, the other, his step. Carmen B. Larbalestier, Hamilton’s biological mother, who is white British, was born in 1955. She got married to Anthony C Hamilton in 1979.

They, however, got divorced two years after Lewis’ birth. Now married as Carmen Brenda Lockhart, she has three children, including Lewis Hamilton, Nicola Lockhart and Samantha Lockhart.

Hamilton has had an excellent relationship with his mum. She has been seen several times at some of his bigger races and also at championships giving moral support to her son who has not failed to make her proud. 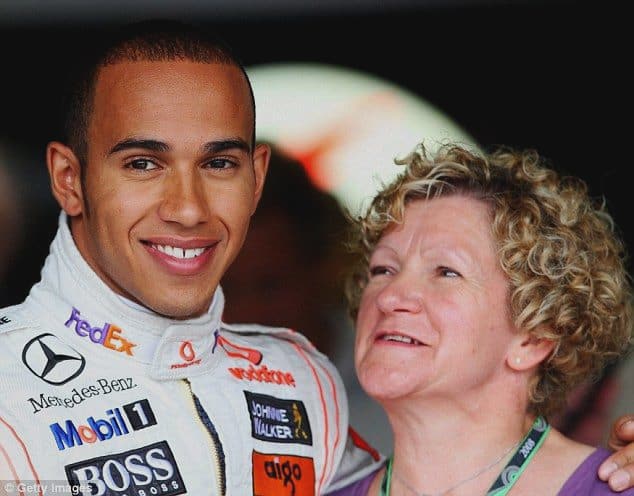 Linda Hamilton is the Stepmother of Lewis Hamilton. She married Anthony Hamilton after he separated from Lewis’ real mother.

Lewis at the age of twelve started living with her and his half-brother after he left his mum’s place. She helped raise Lewis as well as supported his career. 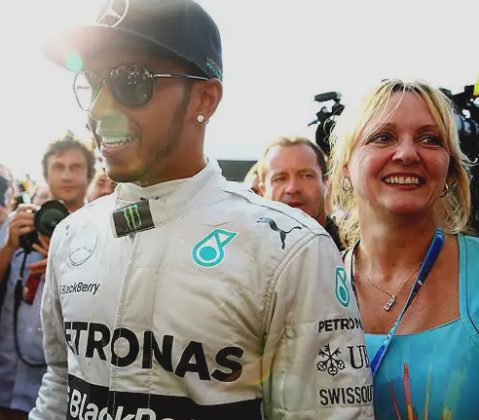 Nicolas Hamilton is the half-brother of Lewis. He is born to Lewis’ stepmother, Linda. Nicholas is also a professional racing driver. He has cerebral palsy and has a specially designed car he uses for his races because of his condition. 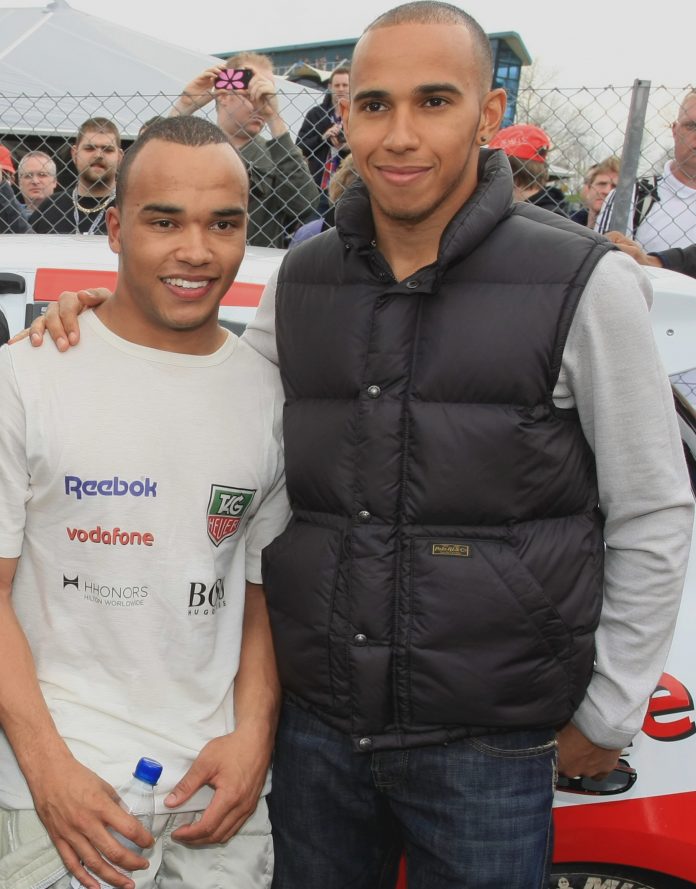 One of Lewis Hamilton’s notable accidents includes the one he had with Max Verstappen in the Bahrain Grand Prix earlier in 2018. Lewis was actually slammed for blaming the much younger driver. 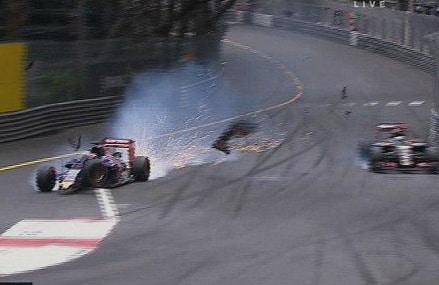 Hamilton, a 33-year-old at the time, had this to say about the 20-year-old Verstappen while attributing the youngster’s age to the incident.

“I just think for him, he’s a young driver and is going to be learning all the time, he’s got fantastic pace but, as youngsters, we do not always make the right decisions”.

There have been some other races where Lewis had been so close to being involved in crashes but he somehow escapes and ends up winning the races.

Contrary to the opinion of many, Hamilton is not just a racer but a songwriter and has over the years writing, in different genres, about 80 songs. He also sings most of the songs he writes during his spare time.

Because of his career as a car racer, he hasn’t given full attention to music as he considers racing more important. In 2015, he collaborated with Bose & Spinz Beats Inc to create his F1 soundtrack, which he released in September that year.

At ChildhoodBiography, we strive for accuracy and fairness. Please stay tuned for more interesting F1 stories from our website. The Childhood Biography of Valtteri Bottas, Oscar Piastri and George Russell will interest you.

A very select and organised biography matched the same way SKY Formula One commentary carry on nothing is his fault etc etc.Maybe sky sports are planning on financing him to be Britain’s Trump