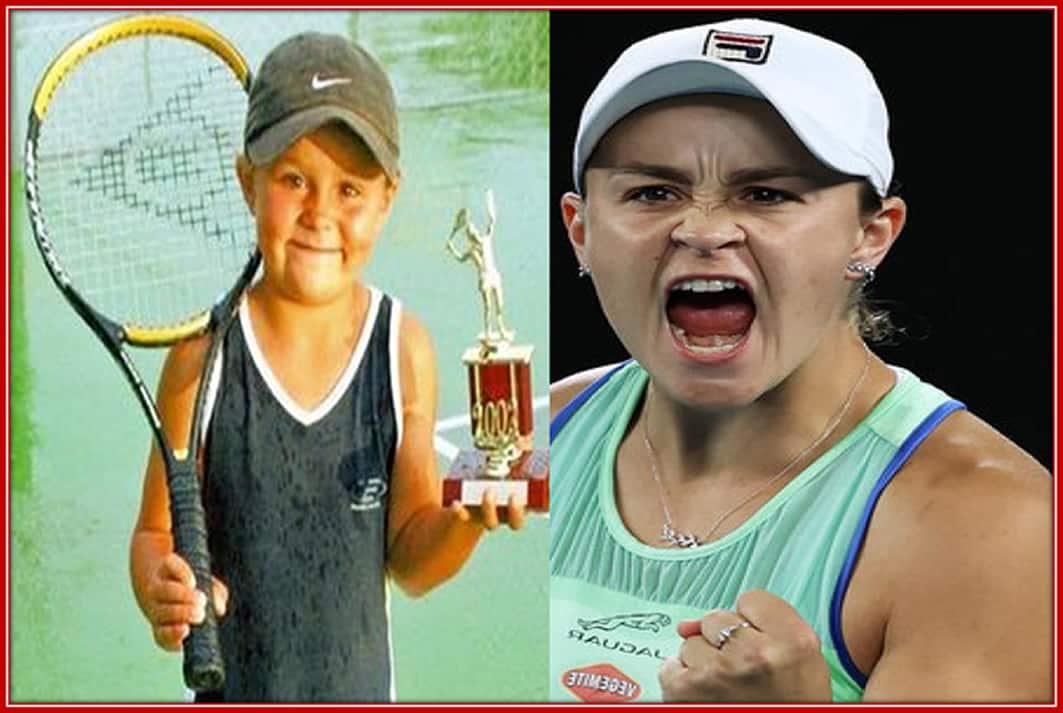 Our Biography of Ashleigh Barty tells you Facts about her Childhood Story, Early Life, Family, Parents, Boyfriend, Husband to be, Lifestyle, Net Worth, and Personal Life.

In a nutshell, we portray the history of the Australian professional tennis player and former cricketer. ChildhoodBiography begins from her early days, to when she became famous.

Yes, everyone knows she is famous for her athletic versatility and right-handed throwback style.

Ash as fondly known, is an Australian tennis player who became the first Australian woman in Forty-six (46) years to win a French Open. Be inspired as you follow through Ash’s life story.

Ash was born on the 24th of April 1996 to her father, Robert Barty, and mother, Josie Barty in the architectural city of Ipswich, located in the booming South East Queensland region of Australia. Barty was only Four (4) years of age when she started, playing tennis.

Besides tennis, she as a Kid also played netball with her elder two (2) sisters. However, Ashleigh decided to focus on tennis because she thought of netball as a girls’ game.

Observing Ash’s talent as early as Four (4) years, she would hit a tennis ball off the garage wall with an old wooden racquet for hours.

Ashleigh Barty’s parents then took her to the West Brisbane Tennis Centre where Jim Joyce would be her coach.

Exceptionally known for her excellent hand-eye coordination and high level of focus. Ashleigh Barty remained, humble and determined. Her sisters also affirm her generosity and competitive personality right from childhood.

The love for sports is central to Ash’s family as well as most residents in the suburb of Ipswich known as Springfield.

A middle-class Christian and Australian household with Ashleigh being the last amongst her two older sisters; Sara and Ali respectively.

Despite the fact that Ashleigh Barty’s Mum is an English Immigrant, Ash has aborigine blood.

She hails from the Ngarigo community of indigenous Australian people; located in the Monaro and Australian Alpine regions of New South Wales and north-eastern Victoria.

Ngarigo is also famous for its Snow mountains.

Worthy of note is that Barty has also been named National Indigenous Tennis Ambassador by Tennis Australia and as such aspires to spread her love of tennis throughout Australia’s Indigenous communities.

Haven lived all her childhood in Springfield, Ashleigh attended Woodcrest State College. Ashleigh had an impressive junior career while in College, winning the 2011 Wimbledon girls’ singles title and reaching as far as World Number Two (2).

From the little we have discussed so far about Ashleigh, you could detect that she must have started her career at an incredibly young age.

By the time Ash was nine (9), she would practice against 15-year-old boys and later with adults as a teenager.

In April 2010, just after turning fourteen (14), Barty started her professional career at an International Tennis Federation (ITF) in her hometown. Even though she lost her first match, she drew in the second and later won at her first pro match.

Despite being the youngest player in several competitions, she consistently emerges a winner. 2012 saw her win four ITF titles in both singles and doubles amongst other wins.

She won her first two single WTA Tour-level matches at the Malaysian Open after a singles main draw at the 2013 Australian Open.

Others include the French and US Open where she won her first-round games at both that same year.

So far, Barty has won eight (8) singles titles and ten doubles titles on the WTA Tour, including one Grand slam singles title at the 2019 French Open and one with her partner CoCo Vandeweghe.

Ash is also the current Champion in singles at the WTA finals and has since confirmed her status as the Queen of world tennis by stepping into occupying the world Number One (1) spot at the WTA Singles Ranking as of 16th March 2020.

Looking at the incredibly early career start of Ashleigh Barty, she seemed to have been losing out on her of her social life.

However, she’s found love as the song goes in a lonely place. Ash is not yet married, but has been dating an Australian golfer, Gary Kissick, since 2017.

Gary is also a PGA professional at the Brookwater Golf and Country Club in Brisbane. Whether the happy couple is engaged, is not yet known because we are however to see a ring on her finger.

While The Bartys leave the Tennis aspect of things to Ash’s coaches, they will closely monitor her wellness, showing caution of possibly being burnout.

Ashleigh seemed too young to be spending almost the entire year either training or being on the road.

Being a civil servant must have helped him in performing his financial duties both as a Father and Husband.

He notably saw to Ashleigh’s tennis training from Childhood till she became famous. Most of Ash’s trophies are kept in Robert’s office.

The joy of every mother is to see her offspring fulfil destiny in grand style. Now that would be the joy of Josie Barty, who is Ash’s Mum.

Although her two sisters Sara Coppolecchia and Ali Egstorfs had to give up their sporting dreams since the family could not afford for all of them to play, they are so proud of their little sister and always looking forward to seeing her back home.

Sara, who is now a Midwife, and Ali are happily married too.

Not much information is available concerning Ashleigh’s English Uncles and Aunts whom she visits yearly close to Nottingham in The United Kingdom. However, we have seen much of Ash with her Nephew and Niece.

Ashleigh proudly parades about and spends not just money but most of her free time too with her Nephew and Niece. Lucy, the eldest of them, is about four (4) years old, Oscar is almost Three (3) years old while Olivia, the latest who is still a baby, is less than a year.

Let us take a quick look at Ash’s schedule aside from her profession; and we get to see that this Tennis prodigy loves reading, fishing, taking Pizza, Fries, and Ice Cream too. The movies are not left out with her favorite Actor as Chris Hemsworth.

The North Stradbroke Island seems to be her favorite vacation spot known for surfing, diving, kayaking, stand-up paddleboarding, cycling, bird, and even whale watching too. It will shock you to know that she is also terrified of heights.

As is widely known, Ashleigh earns from her professional tennis career. She has won prize money to the tune of $17 million since she turned pro playing tennis in 2019 till date with a current net worth of about $10 million US dollars.

Though she admits not living an extravagant life, She lives in a luxurious house located in her country home; Ipswich close to her family and expresses her love for Jaguar cars.

FACT# – 1 Was once a Cricketer

In 2014, she took a break from tennis, and Ashleigh Barty switched to cricket and played for the Australian national team. She made a comeback in tennis in 2016, breaking into the top 20 rankings in 2017.

To kickstart her day, Ashleigh turns to coffee, in any shape or form be it espresso, cappuccino or latte. This daily caffeine fix could be the secret to her success on court!

Barty, came up with the initiative for Australian stars to show support for healthcare workers in Queensland recently during the COVID-19 pandemic.

This is aside from the $3 million donations to families affected by bushfires in Australia amongst others.

She also has a heart for animals too. “Dogs are my favorite animal and right now I have four of them,” She says; Rudy, Maxi, Affie, and Chino, a mixture of fluff ball breeds.

Rounding up Ashleigh Barty’s Biography and Childhood Story, we get to see the huge effect of identifying one’s dream early enough.

Also following through with hard work and determination right until breakthrough.  Another Tennis prodigy to watch is Sophia Kenin.

We anticipate that you found this Bio write-up heart-warming and enlightening too. Do well to share your experience with us. We guarantee you more biography facts with top-notch accuracy and fairness; rain, come shine.