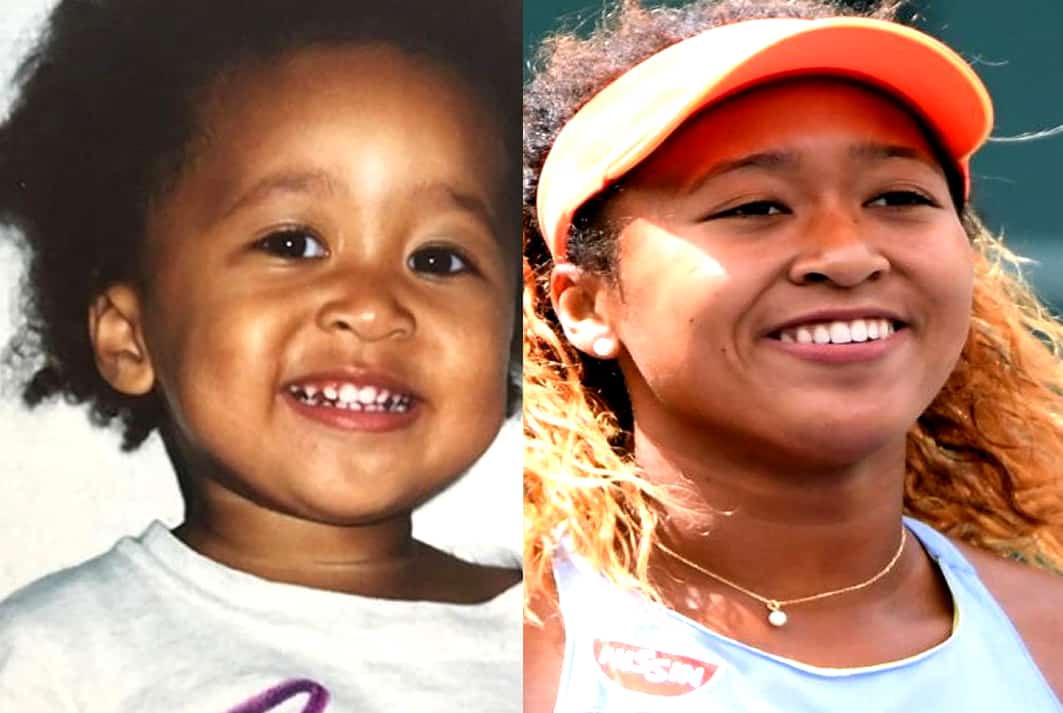 Childhood Biography presents the Full Story of a professional tennis player with the nickname “Naomi Chan“.

Our Naomi Osaka Childhood Story plus Untold Biography Facts brings you a complete account of notable events from her childhood time to date.

The analysis involves her early life, life story before fame, family background, and personal life. More so, other OFF and ON-Screen little-known facts about her.

Yes, everyone knows of her aggressive playing style with powerful serves. However, only a few consider Naomi Osaka’s Biography, which is quite interesting. Now, without further ado, let’s begin.

For Biography starters, Naomi Osaka was born on the 16th day of October 1997 at Chuo-ku in Osaka Japan. She is the second of two children born to a Japanese mother, Tamaki Osaka and to a Haitian father, Leonard Francois.

It was at the island that Naomi and her elder sister Mari were raised by her parents and paternal grandparents.

Shortly after they settled at the Island, Naomi’s father Leonard began training his daughters on how to play tennis, a development which came after he watched the Williams’ sisters compete at the 1999 French open.

Although Leonard had considerable experience in tennis, he followed the blueprint of how Serena and Venus were trained by their father, Richard Williams, to become competent players of tennis.

Tennis would thereafter become a way of life for Naomi and her sister Mari. They practised the sport at Long Island until 2006, when the family moved to Florida for the purpose of embracing better training opportunities.

Upon graduation from the school, she partook of the online learning services provided by Broward Virtual Middle High School in Florida.

While acquiring education from the aforementioned schools Naomi was actively involved in tennis.

Unlike most professional tennis players, Naomi did not compete on the ITF Junior Circuit. However, she played in a few junior tournaments before switching to ITF women’s Circuit.

While at the circuit Naomi featured in numerous singles and double draw matches. Although Naomi never won a title at ITF level, she finished as runner up on four different occasions.

Subsequent endeavours saw Naomi turned pro when she was aged 16 and qualified for the WTA tour in September 2013. The tour enabled her to compete professionally at Challenge Bell in Quebec and the Pan Pacific Open in Tokyo.

Highpoints of her early tennis career include upsetting world No. 19 Samantha Stosur at the 2014 Stanford Classic and reaching her two highest level ITF finals in 2015.

She also won the Rising Star Invitational four-player exhibition tournament and reached the biggest final of her early career at the WTA 125K Hua Hin Championships in Thailand.

2016 brought good tidings for Naomi, who qualified for her first grand slam main draw at the Australian Open. However, she lost out to Victoria Azarenka at the third round of the event.

The same situation played out at the French and US Open where she reached the third round of a Grand Slam event for the third time that year.

Notwithstanding, she rapidly rose in rankings after upsetting No. 12 Dominika Cibulková and No. 20 Svitolina to reach her first WTA final at the age of 18.

She finished the WTA tournament as a runner up to Caroline Wozniacki and entered the top 50 of WTA rankings.

Osaka remained relatively unknown especially throughout 2017 when she was unable to progress any higher in WTA rankings.

However, she made it to the third round of Wimbledon and the US open as well as achieved little at the Charleston and Hong Kong Open.

Following her lack of improvement, Naomi hired Sascha Bajin as her new coach. Sascha, who had earlier worked as Serena Williams hitting partner helped Naomi reach the fourth round of the Australian Open for the first time.

The significant improvement was followed by a greater success at the Indian Wells Open, where Naomi defeated fellow upstart Daria Kasatkina to win the tournament.

Naomi didn’t clinch any other breakthrough result until September 2018, when she won the US Open by defeating her childhood idol, Serena Williams.

Naomi is single and has not shared anything about her current relationship life. The little which the media knows about her love life is that she had a crush on Actor Michael B.

Jordan, a fact she revealed to DeGeneres Show during an interview in 2018. See excerpt of the moment she made the revelation.

Jordan remains just a crush in Naomi’s mental list of prospective boyfriends as she continues to focus on conquering the Tennis World.

Who knows? she might be engaged in secret dating just like Serena Williams secretly dated Alexis Kerry Ohanian for 15 months before marriage.

Naomi was born into a family of 4. We bring you factual details about members of her family.

Leonard Francois is the dad of the tennis star. He was born in Haiti and was a student of New York University when he visited the Japanese town of Hokkaido. It was at the town that Francois met and married Naomi’s mother Tamaki.

Like Richard Williams – father of Serena and Venus – Leonard single-handedly coached Naomi and her sister Mari up until they began playing on the ITF Women’s Circuit.

The father of two also made the important decision of ensuring that his daughters represent Japan given that they were born in the country and have always felt Japanese. Leonard continues to support his daughter and instruct them to place happiness over success.

Tamaki Osaka is the mom of the tennis player. She is from Hokkaido in Japan but has “Osaka” as her maiden name, a name which was also given to Naomi and Mari for “practical reasons”.

It is worthwhile to note that Tamaki parents did not approve of her relationship with Leonard.

As a result, Tamakai and Leonard relocated from Hokkaido to Osaka where Naomi and her sister were given birth to.

The supportive mother of four is credited for instructing Naomi in Japanese, a language which the tennis star understands but can’t speak perfectly well.

Naomi has no brothers but a sister Mari whom she grew up playing tennis with as a kid. As time went by they made their professional main draw debut as doubles in March 2011 and twice played against each other as professionals.

The first was in March 2012 at the ITF $10K event in Amelia Island. Mari defeated Naomi in the semifinals of the event.

However, the second meeting saw Naomi defeat Mari in March 2014 during an ITF tour at Mexico. Although Mari has not made many gains in tennis, Naomi considers the loving and supportive sister as her greatest rival and motivation.

Personal Life away from Tennis:

What do you know about Naomi off the court? Sit back as we bring you makings of her personality in order to help you have a complete picture of her.

Starting off, Naomi has an introverted and shy persona. The reserved trait which is uncommon to stars is believed to be a hallmark of her Japanese roots.

Speaking about the trait, her former coach Sascha Bajin remarked that:

“I thought she was a little bit more of a diva because she didn’t talk much. She doesn’t really look at someone’s eyes, but that’s just because she was always so shy … Back then I didn’t know for what reason.”

Notwithstanding, she is loved by many due to her candidness and simplicity. The multiracial tennis star has a good command of English and understands Creole, a language used by Naomi’s Haitian grandparents to communicate with her during the family’s stay at Long Island in New York.

Above all, she is proud of every individual component of her roots and does not fail to remind reporters of her Haitian identity whenever they just refer to her as Japanese.

She is a lover of dogs and is deeply involved in playing video games, especially Pokemon. What’s more? she loves memes.

Naomi has a fast-growing net worth estimated to be around $8 million dollars in 2018.

With such net worth,  Naomi lives like a queen at her luxury residence in Boca Raton, Florida, United States. The house has all the facilities she needs to train and relax.

Speak of mobility, Naomi does not have a private jet yet but flies first class to her tours.  She can be easily spotted navigating the road networks of Florida in cars that include but are not limited to Mini Cooper Clubman JCW luxury car and Audi Q7.

Delivering her speech moments later Naomi emotionally apologized to fans for doing her job. According to her:

“I know that everyone was cheering for (Williams) and I’m sorry it had to end like this. I want to say thank you for watching the match.”

FACT CHECK: Thanks for reading our Naomi Osaka Childhood Story plus untold biography facts. At childhood biography, we strive for accuracy and fairness. If you see something that doesn’t look right in this article, please place your comment or contact us!

Both interesting and inspiring. GOD BLESS US ALL.