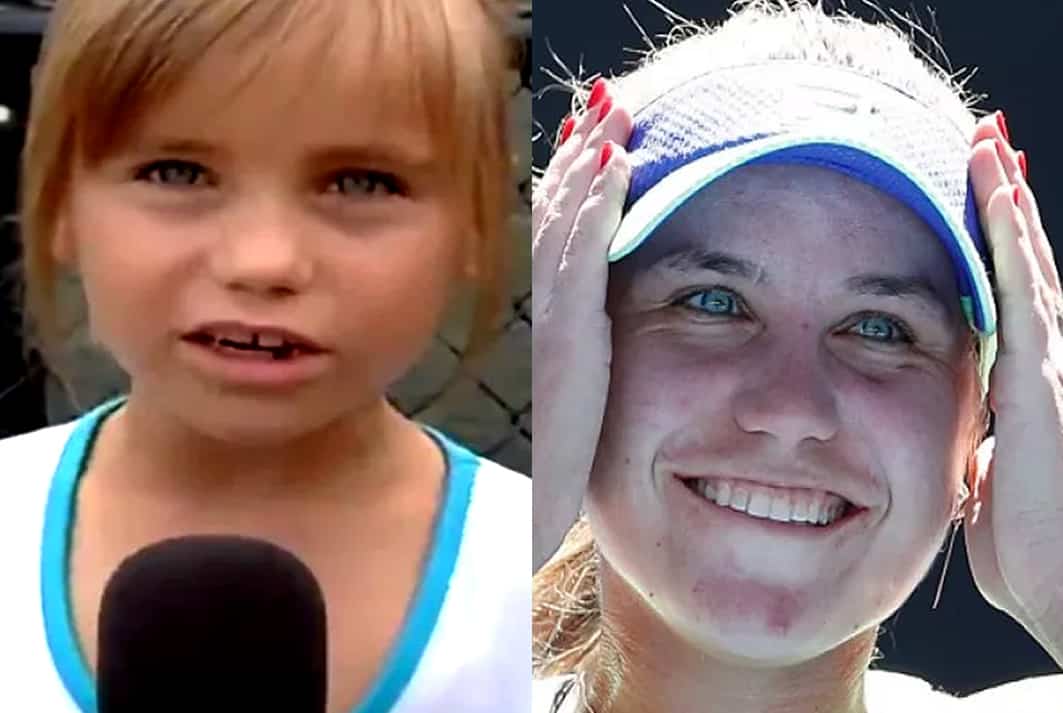 Starting off, she bears the nickname “Sonya“.

More so, Sophia’s Lifestyle, Personal Life, and other notable events right from when she was a child to when he became popular.

Yes, everyone knows she is one of the celebrated names in women’s tennis. However, only a few consider Sophia Kenin’s biography, which is quite interesting. Now, without further ado, let’s begin.

For Biography starters, Professional Tennis player Sofia Anna “Sonya” Kenin was born on November 14, 1998. She was born to her father, Alexander Kenin, and her mother, Svetlana, in Moscow, Russia.

Sometime after her birth, Sophia Kenin’s parents relocated to the United States. Alexander Kenin and Svetlana had previously been in the US (New York in the late 1980s) prior to her birth but returned to Russia for Kenin’s birth due to family reasons.

Sofia is known to have possessed a lot of success since childhood, as a result, of her being raised by nearly every member of her family; her uncles, aunties, grandmum, granddad, etc.

The positive influence of Sophia Kenin’s family members on her began in Russia, then to the United States.

Although Sofia was born in Russia, She is a bonafide American national.

What more? she possessed Russian family origins and was raised in the town of Pembroke Pines in Florida, USA. It was Florida that Sophia Kenin’s parents relocated to a while she was still a child.

Sophia Kenin’s parents had little money when they first moved to the United States, a fact that implies she wasn’t raised in a wealthy family background.

In order to keep the family going, Sophia Kenin’s mother sought a nurse job (which she did since her time in the Soviet Union) while her dad had a coaching job.

Growing up in Florida, a 3½-year-old Sofia began playing with tennis balls and rackets after watching her dad play the sport as a recreational activity. Drawing inspiration from her father became her earliest interaction with Tennis.

In fact, she wasn’t into any other toys or childhood sports. All she wanted was to have a tennis ball and play tennis. Slowly developed obsessive attachments to tennis equipment and gear.

By the time Sofia was aged 5, her potentials in tennis had already become strikingly evident to her parents. Thus, they secured the services of coach Rick Macci to give her advanced training in the sport.

While Rick was at it, he couldn’t help but admire Sofia’s natural ability in the sport, which he described as “already baked in.”

As a result, he was strongly motivated and committed to shaping her to become a perfect tennis prodigy.

When the time was right, a 7-year-old Sofia began playing United States Tennis Association (USTA) girls’ 10 Singles. She dominated the tournaments and was in no time ranked number one in the State of Florida.

With her outstanding performance, Sofia earned the opportunity to interact and hit with tennis professionals.

2014 was the beginning of a turning point in Sofia’s career for many reasons. It was the year that the then 16-year-old gave her career records a boost by earning a spot in Team USA at the 2014 China Summer Youth Olympics.

A year later, Sophia took a step towards becoming a professional by winning the USTA junior national championship in 2015.

The victory secured Sophia a wild card, which she used to make her Grand Slam debut at the 2015 US Open. However, she lost her opening match at the grand slam event to Mariana Duque-Mariño.

The following year (2016), Sophia won her first two ITF titles and steadily rose through WTA rankings. She eventually turned professional in September 2017 and finished the year ranked No. 108 in the world.

Thanks to her improved ranking, Sofia was able to play and take advantage of tours that expedited her breakthrough.

In fact, she won four WTA singles finals in 2019 and defeated Serena Williams at the 3rd round of the 2019 French Open( a crucial part of Sophia Kenin’s Biography).

The joy of Sophia Kenin’s parents especially her dad knew no bounds at the time gained global recognition by beating home favorite and world No. 1 Ashleigh Barty to win the 2020 Australian Open.

Did you know?… She became the youngest American to win a Grand Slam women’s singles title since Serena Williams in 2002. The rest, as they say, is history.

Who is Sophia Kenin’s Boyfriend?:

There is no denying the fact that Sophia’s newfound fame has increased her fanbase. It has also courted media attention with emphasis on her love life as many desire to know whether she has a boyfriend or not.

The 21-year-old is single at the time of writing and has not to be known to have had boyfriends in time past. Neither does Sophia have son(s) and daughter(s) out of wedlock. She rather focuses on her career which has prospects of attaining greater heights.

Life is good and even worth more living for tennis stars who have a rich family life like Sophia Kenin’s. We bring you facts about Sophia’s family members, beginning with her parents.

Svetlana is the woman identified to be Sofia’s mom. She left the Soviet Union in 1987 with Sofia’s dad and migrated to the United States, where they lived until she was close to giving birth.

They returned to Moscow, where Sophia was born in 1998, and stayed there for a few months so her grandmother could help with the newborn.

When they eventually returned to the states, Svetlana raised Sophia as a loving mom and never clipped her wings from flying. She supported the tennis star all the way and has become proud of what she has become.

Alexander Kenin is Sophia’s dad. He worked as a taxi driver and did other odd jobs during Sophia’s early life with a view to helping his immigrant family realize their American dream. Alexander was not Sophia’s dad but her primary coach.

He began hitting with her at their driveway before securing the services of coach Rick Macci who trained her at Florida’s Broward. Alexander has a good father-daughter relationship with Sophia who holds him in high esteem.

Sofia has a younger sister identified as Anya and a yet-to-be-identified brother. She grew up with the little-known sibling who joins their mom is being her biggest fan. Yes, we do not know about Anya’s interests at the time of writing.

However, the manner in which she passionately speaks of her celebrity sister gives the inkling that she also has an interest in playing tennis.

Speaking of her extended family life, the only Sophia Kenin fact that exists is that she was also raised by her relatives. As at the time of writing, there is not much known about her ancestry and family roots.

Neither are there records of Sophia’s paternal and maternal grandparents. Similarly, the identity of her aunts, uncles, cousins, nephews and nieces are yet to pop up on the internet.

What are the makings of Sofia’s persona and how do fans see her outside tennis courts? here is just the right place to be as we outline traits of the tennis star’s personality which is much defined by the Scorpio zodiac sign.

She is passionate, energetic, nice, possesses a unique sense of humor, and rarely reveals facts about her private and personal life.

Outside tennis, she has interests and hobbies that include meeting new people, traveling, listening to music, watching movies, and spending a good time with her family and friends.

At the time of writing this Sophia Kenin’s biography, did you know that she has an estimated net worth of $28 Million?

Her primary income source constitutes wages and salaries that she receives for playing professional tennis while earnings from endorsements augment her rising wealth.

As such, she can afford to ride in exotic cars regardless of the fact she lives in her family house at Pembroke Pines in Florida. She also affords having a good time at top-rated resorts where she enjoys her vacation.

Before we call it a wrap on Sofia Kenin’s childhood story and biography, here are lesser-known or untold facts about her.

Little is known about the religion Sofia Kenin’s parents made her adopt as a child. However, the odds are in favor of her being a believer regardless of the fact that she has never gone religious during interviews and at press conferences.

Did you know that Sofia Kenin loves pets, particularly dogs, and often advocates for their welfare? In fact, she has a homeless dog named Whitney Houston. The manner which she holds the pet speak volume of the affection that she has for it.

The tennis star does not smoke, neither is given to drinking at the time of writing. She rather focuses on maintaining a healthy lifestyle as she set her eyes on clinching more grand slam titles.

Finally, in Sophia Kenin’s Biography, we give you facts about her tattoo. Like Bianca Andreescu, Naomi Osaka, Caroline Wozniacki, and Simona Halep, body arts are probably the last agenda on the tennis star list of interests as her good looks and great height of 5 feet and 7 inches makes tattoos strike her as an unnecessary beautification.

This wiki knowledgebase helps you find information about her in a concise and easy way. Find below;

FACT CHECK: Thanks for reading our Sophia Kenin Childhood Story plus untold biography facts. At childhood biography, we strive for accuracy and fairness. If you see something that doesn’t look right in this article, please place your comment or contact us.

She is that rich already? Fantastic.