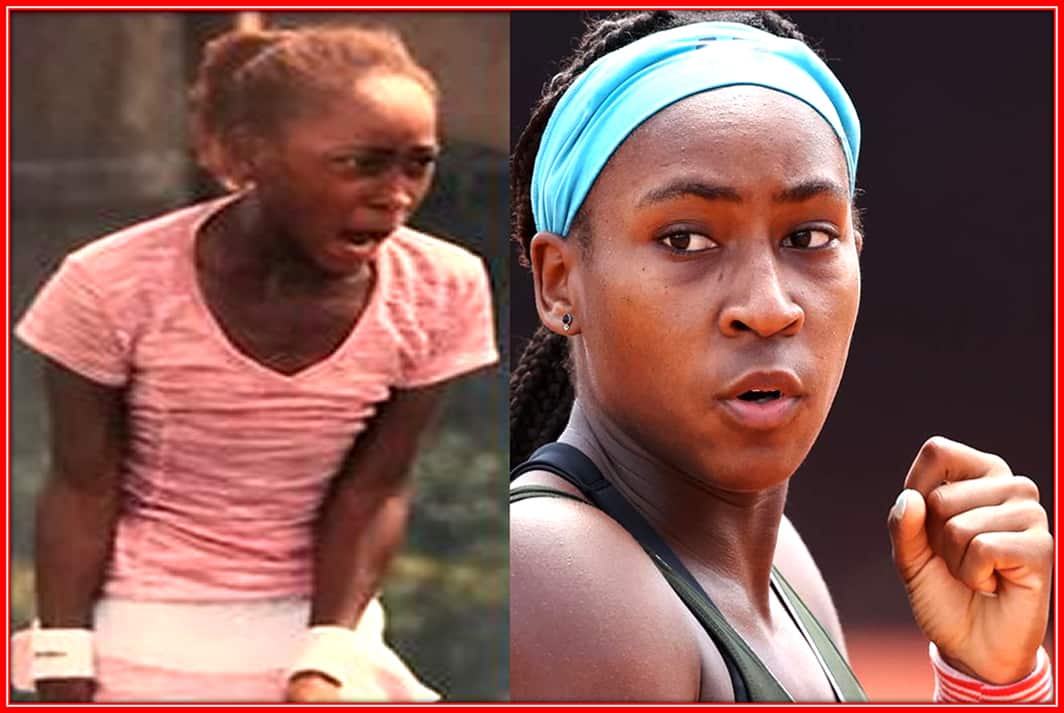 Simply put, we present Coco Gauff Life Story and we begin it from her early days to when she became famous as a Tennis star.

To whet your autobiography appetite on the engaging nature of Coco Gauff’s Biography, we present you with this gallery. No doubt, it tells her story – from Coco’s childhood right until the moment of Fame.

Yes, everyone knows that she became the youngest singles title-holder on the Women’s Tennis Association Tour at the 2019 Linz Open.

However, only a few sports lovers have read a concise version of Coco Gauff’s Biography, which is quite interesting. Without further delay, let’s begin.

For biography starters, she bears the nickname ‘Coco.’ But the starlet’s actual moniker is Cori Gauff.

Coco Gauff came to this world on the 13th day of March 2004 to her father, Corey Gauff, and mother, Candi Gauff, in Atlanta, Georgia.

The American tennis player is the eldest child of three kids born of the union between her Dad (Corey Gauff) and Mum (Candi Gauff) pictured below. Behold Coco Gauff’s parents.

Gauff spent the first four years of her childhood as the only baby of her family before welcoming Codey to the world in 2008.

Like every big sister, she was overprotective of her cute little sibling, who seemed to be quite fragile.

We know for sure that Gauff was a kind-hearted kid who could sacrifice her welfare for the good of her brothers (Codey and Cameron).

The young talent spent most of her childhood in Atlanta, Georgia. When she saw Serena Williams win the 2009 Australian Open, the 4-years-old lass took a liking to the game.

Thankfully, her parents were both athletes who understood the importance of pursuing a sporting career.

Hence, they encouraged their daughter to try out different sports, like basketball and track.

A few years went by before Gauff finally made up her young mind on what game to delve into. At 6, she began playing tennis under the tutelage of her father, Corey Gauff.

Talking about her ancestry, the sportswoman is a national of the United States. Her parents are both natives of the palm beach County of Florida – Delray Beach.

Do you know?… Coco Gauff’s place of origin is known for its interesting culture that stretches as far back as centuries ago.

Of course, its thriving arts scene, inviting beach weather, and the lively main street is worthy of tourist attraction.

Apparently, her menage did not fall into the ranks of wealthy citizens. However, they worked so hard to survive as most middle-class households in their country would.

There was a time when Gauff couldn’t pursue a high-level training in tennis because of money problems. But she was lucky to have caring parents who supported her at every point of her career journey.

They even moved back and forth (from Delray Beach to Atlanta and back to the Beach) to get her the best tennis lessons.

No doubt, her meteoric success is a product of the support she received from her menage.

At the tender age of 6, the talented lass had decided to engulf herself in the game of tennis more than anything else.

She became even more convinced of her ambition after winning the Little Mo eight-and-under nationals at 8.

I was not much of a team person. Of course, I loved tennis. But when I was younger, I didn’t want to practice at all.

I only wanted to Have fun with my friends. However, When I turned eight, I took part in the ‘Little Mo’. Afterwards, I decided to do that for the rest of my existence.

After achieving this feat, her parents gave up their careers to help her excel in tennis. While Gauff’s father coached her in the game, her mother took care of her homeschooling.

As she grew older, her need for an experienced trainer became eminent. However, her family couldn’t afford to get her the best training facilities.

Fortunately, Gauff was accepted into the Mouratoglou Academy, which was run by Patrick Mouratoglou, the longtime coach of Serena Williams.

This feat, which she achieved at 10 years and 3 months, established her as the youngest titlist in the tournament’s history. Gradually she started to make a significant impact as a junior in major tournaments.

At 13, the rising starlet made her first appearance in the Grand Slam at the 2017 US Open.

Although she finished runner-up in the tournament, she became the youngest girl’s singles finalist in the US Open history.

The ensuing years of her junior career saw her cling onto her first Grand Slam title in the 2018 French Open. Barely a month afterwards, Gauff defeated McNally and became the No. 1 junior on the planet.

Her subsequent achievements were enough to declare her a world-class player.

At 14, she made her first professional appearance in the ITF Women Circuit as a qualifier in the Osprey $25K event. There, she won her first match and continued to advance her career portfolio.

The starlet has experienced some moments of triumph as well as several disappointing performances as a veteran.

However, she kept her priority straight and worked towards establishing herself as a household name in tennis.

At the 2019 Linz Open, Gauff won her first WTA singles title. Hence, the 15-years-old sportswoman became the youngest athlete to win the accolade since 2004.

Moreso, Gauff became the youngest female player to reach the Grand Slam quarterfinal since Nicole Vaidisova at the 2006 French Open. The rest, as they say, is history.

We can not dispute the fact that she is a beautiful gem. Of course, her rare talent and exquisite personality may have attracted the love of many young guys who are crowded in her fanbase.

However, Gauff has paid no attention to matters of the heart. She’s got a similar attitude towards relationship life like the American starlet Sophia Kenin.

They both prefer to subject their entire energy to improving their careers rather than giving a second thought to any romantic affairs. Hence, Coco Gauf has no boyfriend at the time of writing this biography.

What makes the tennis prodigy thick?… For the records, she is a lover of anime. Yes, Gauff once did a cosplay of Katara (a character in ‘Avatar, the Last Airbender’) to display her love for the anime.

We’ve even got a clip that shows how she tried to imitate Katara in the water bending art. Do you think she is the perfect human replica of the animated water bender?

Gauff has got a lively personality which is quite the opposite of the calm and reserved nature of Sloane Stephens. Being a frisky individual makes it possible for her to blend easily with new people every day.

What’s more?… The tennis player isn’t scared of height. In her free time, she usually goes sky walking with her father.

Check out her courageous reaction when she made it to the Sky Tower with dad in the video below.

For the starlet who has amassed an estimated Net Worth of $2.5 million in 2021, it is quite surprising that she has maintained a low-key lifestyle.

Since her meteoric rise to fame, Gauff has not really given her attention to luxury assets.

She is one of the few sportswomen that are less concerned about showing off flashy houses and exotic cars on social media.

Being able to return to a place she calls home is one of the biggest blessings of her existence. Of course, she loves her family so dearly that she can do anything to make them happy.

Hence, we present you with information about her father, mother, brothers, and relatives in this section.

One character that can not be erased from the sequel of her biography is her dad. His name is Corey Gauff, and he was a college basketball player at Georgia State University.

Gauff’s father worked as a health care executive to support his family. However, he had to give up his career pursuit to pay special attention to his budding tennis player.

As much as her father was an athlete in college, her mom also was not left behind in sports. Coco’s mother, Candi Gauff, took part in track and field games back in the good old days.

She worked as an educator at Florida State University to support her family. Just like Corey, Candi also sacrificed her career path to support her daughter’s ambition.

As we have earlier mentioned, she oversaw Coco’s homeschooling.

The tennis prodigy has two younger brothers, namely, Codey and Cameron Gauff. Both her siblings were involved in sports at a very tender age. We honestly hope they end up succeeding like their big sister.

Spending some quality time with her grandparents makes life a lot more fascinating for the sportswoman. Even in their old age, her grannies often make sure they watch her game.

Below is a photo that shows one memory Gauff made with her grandmother, Yvonne Lee Odom, and grandfather, Eddie Odom.

To bring the Starlet’s memoir to a close, here are a few realities that would help you get a better understanding of her biography.

Do you know?… In the quest of extending her versatility in sports, Gauff received some boxing lessons from Mike Tyson.

Of course, such privileges are actually a once-in-a-lifetime opportunity for the young celebrity.

One fascinating fact about the sportswoman is her profound love for her faith. She is a Christian who proudly identifies with her religion wherever she finds herself. Do you know?… Gauff always prays for her opponent before the commencement of their match.

The young prodigy does not only look up to athletes as her major source of motivation. She claims that Rihanna, Beyonce, and Michelle Obama are her idols away from her tennis endeavors.

The table below reveals concise information about Coco Gauff. It grants you the ability to skim through her profile as fast as possible.

The Biography of Coco Gauff makes us understand the quote that “Versatility is an extra string to a player’s bow.” Indeed, she has learned to be comfortable in many positions that have improved her tennis reputation.

We rarely get to see parents who give up their careers for the success of their children.

But Gauff was quite fortunate to have her mother and father make such a sacrifice for her. No doubt, her family is the talisman of her career achievement.

Asides from Coco Gauff’s Bio, we’ve got other Tennis Players’ childhood stories – for your reading pleasure. The Life History of Bianca Andreescu, Sloane Stephens, and Caroline Wozniacki will interest you.

Thanks for reading this wonderful piece of the starlet’s bio. We hope her siblings get to achieve as many accolades as she did.