In clear terms, we are giving you a complete analysis of notable events surrounding Mick’s  Bio, starting from his early days until when he became famous.

Find below, from Cradle to the Rise of Mick Schumacher- a summary of his Bio.

Popularly known for race driving, we sure know you already have an idea he is the son of the legendary German racing driver, Michael Schumacher.

However, we believe it is worth knowing how his son evolved, hence his Bio. Now without further ado, let’s begin.

For Biography Starters, he bears the nickname ‘Mini Schumi’. Mick Schumacher was born on the 22nd day of March 1999.

Mick came to the world through his mother, Corinna Schumacher, and father, Michael Schumacher in Vufflens-le-Château, a municipality, located in the district of Morges, Switzerland. Find below, the location of his birthplace. 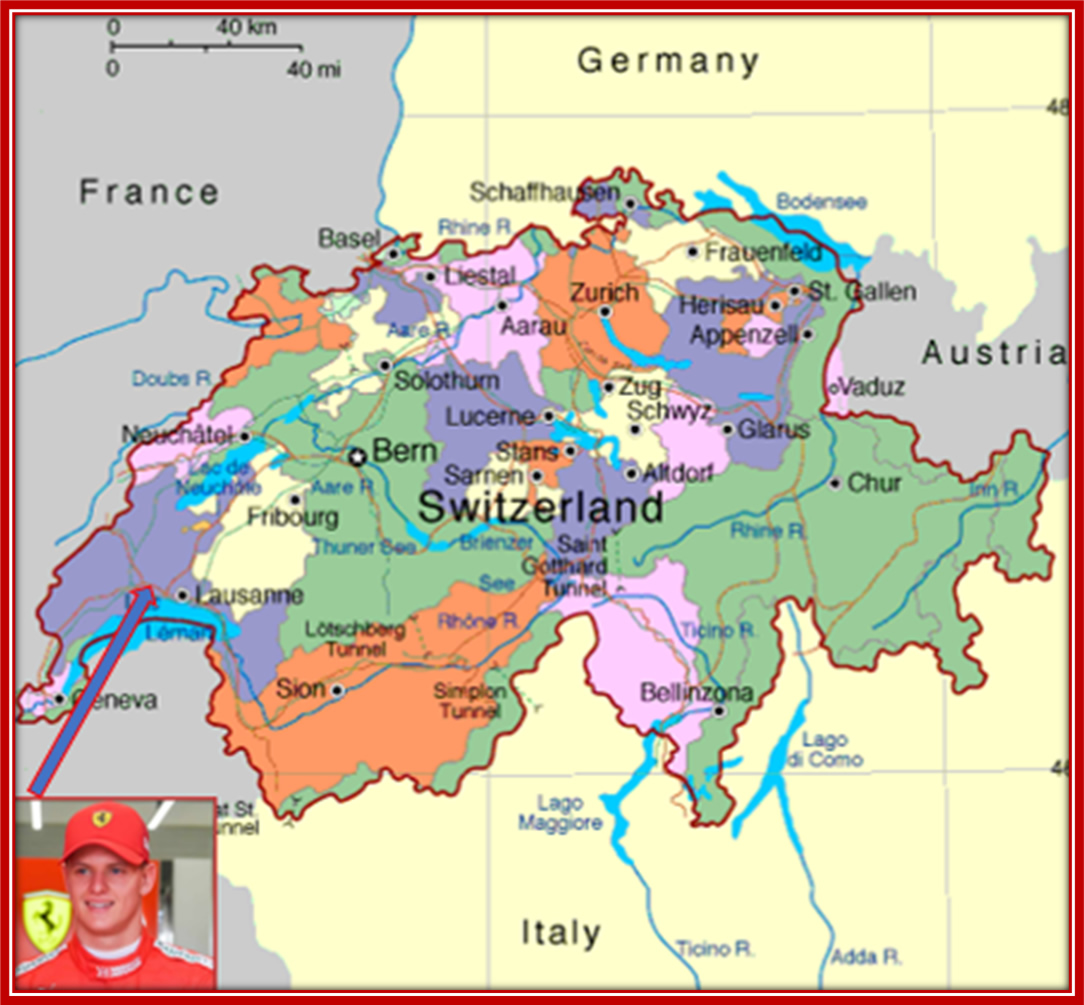 On the other hand, his dad, Michael Schumacher is the record-breaking seven-time Formula One world champion.

From birth, baby Mick was destined to be great, a feat that was engineered by his legendary dad. Behold, a baby photo of Mick Schumacher with his Dad. Without a doubt, his destiny was told from an early age. 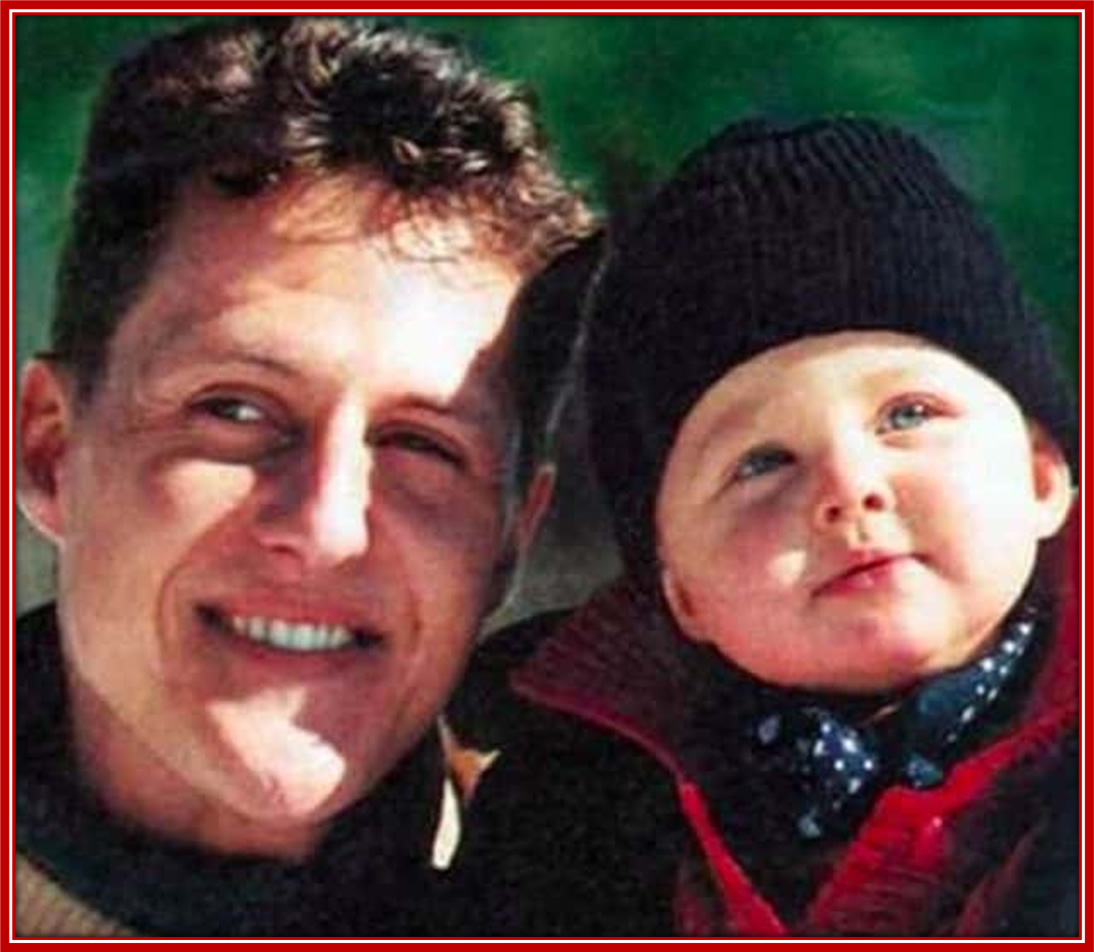 As the son of a former Formula One race legend, it was natural to see driving sports cars becoming his early hobby.

Mick Schumacher, who hails from a motorsport family background, saw himself naturally having the passion for kart driving early on, as a toddler. As early as age three, he began displaying go-karts skills. 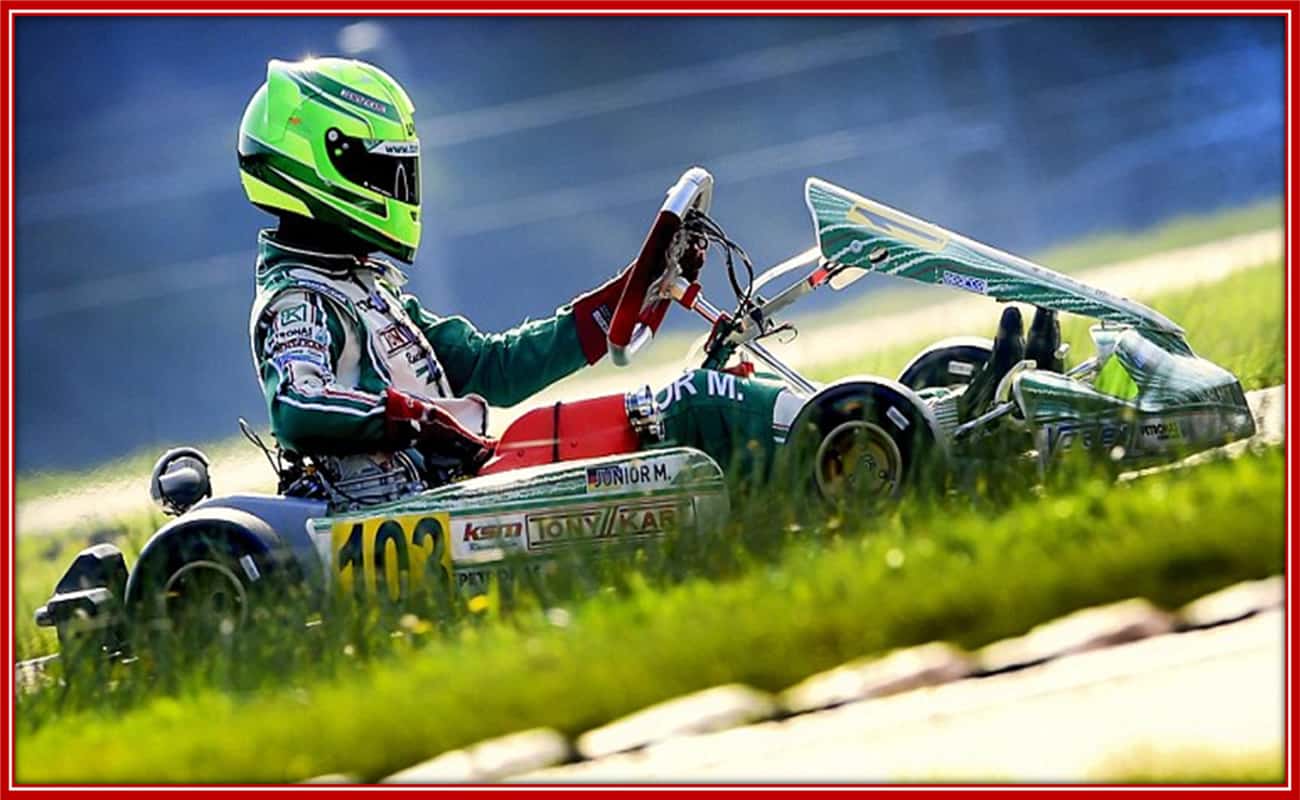 Movin gon to age eight, Mick saw himself into national racing. At this point, he began having a great push to become a Formula 1 driver.

In other to avoid much attention, being the son of the celebrity, his dad Mick Schumacher adopted his mother’s maiden name “Betsch.” As a result, little Mick trained and sharpen his skills as Mick Betsch.

Did you know?… The passion for motorsports has been central to every member of Mick’s household.

Aside from his Dad being a Formula One world champion and mum, a
sportsperson, there were his uncle and cousins too- who were also racing Drivers.

Growing up in a family with rich racing history, Mick observed he had fewer choices in his career path.

To tell the truth, there was no way he was going to escape being a race driver as his daddy must have had a tremendous influence on him.

Here is a tête-à-tête between a father and son who see himself having no option other than following the footsteps of his dad- a legend in motorsports. 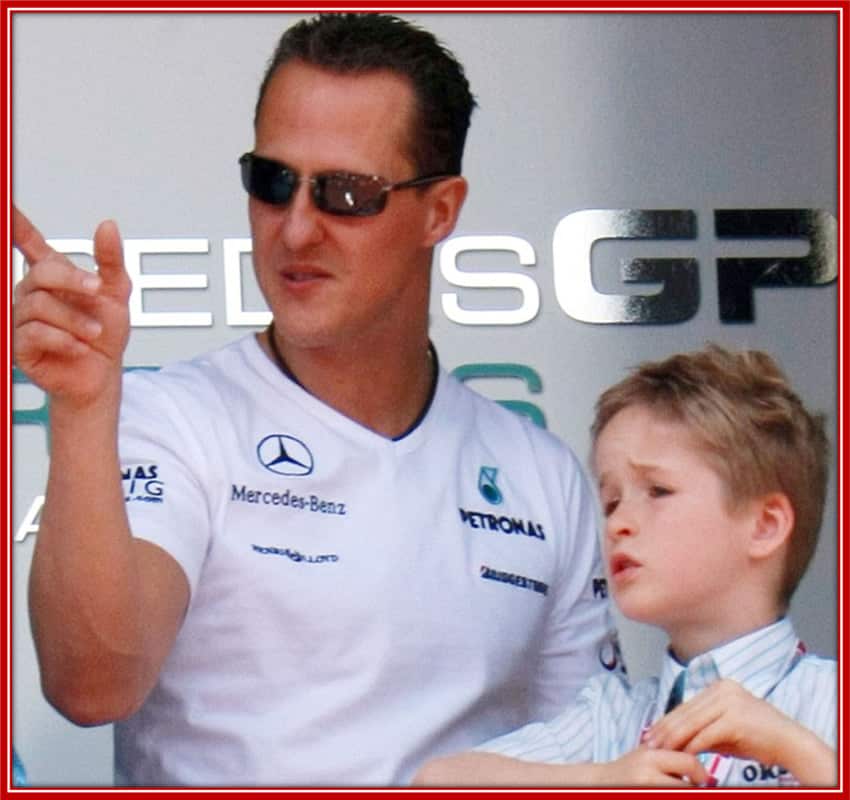 Cultural roots, as they say, have a significant impact on one’s personality. What could his family origin seem?

Truth is, Mick Schumacher’s parents are German natives and his Dad is a native of Hürth in North Rhine-Westphalia in Germany.

This is where we believe the race driver has his family roots. Also, we could conclude that Mick is German-Swiss, judging by his ancestry and place of birth.

Lots of similarities seem to exist between the childhood life of Mick Schumacher and Max Verstappen. For Mick, he never traded his education.

The Youngster hardly missed classes while in School unlike Max did. Both, however, were talented young chaps with dreams to become Champions under the tutelage of their dads.

Little Mick as observed, began winning championships even while he focused on his education. 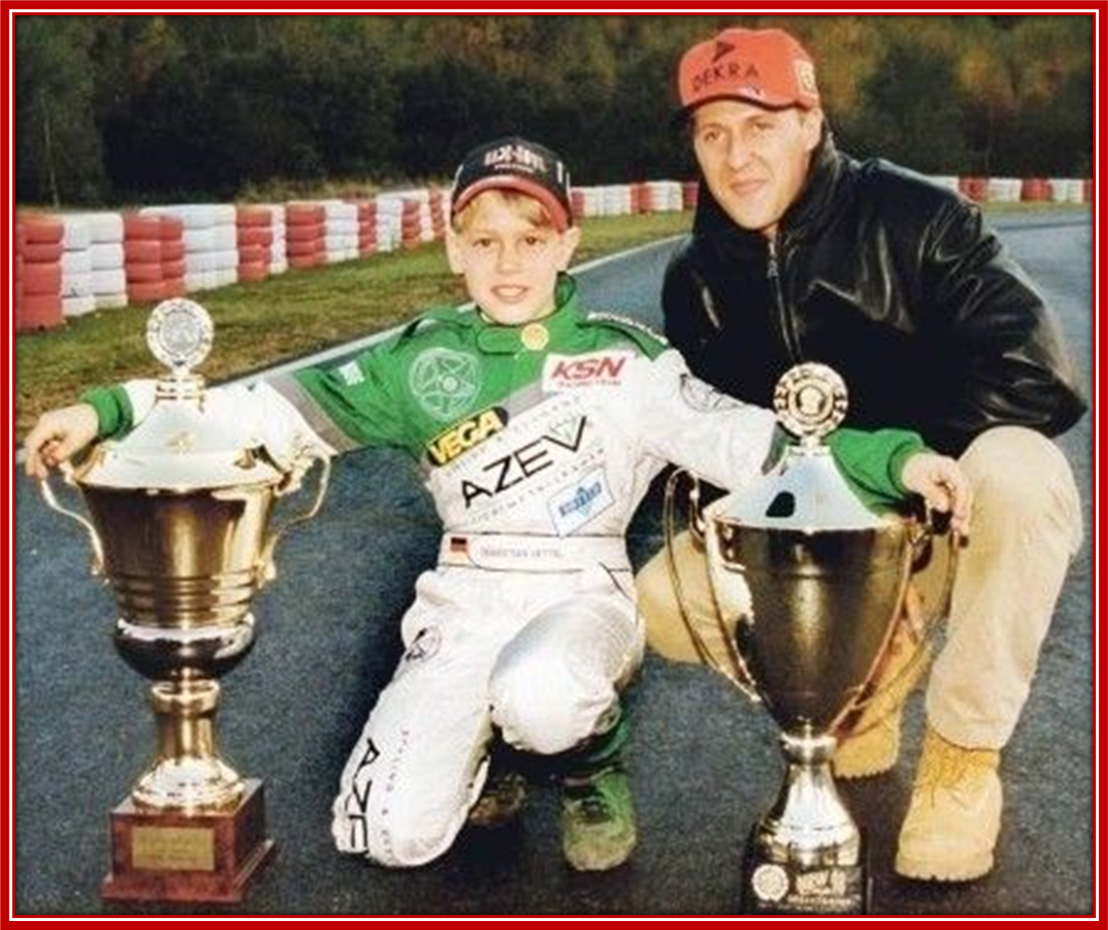 With a big dream at heart, Mick did the needful- which is, consistent training. At the age of nine, he enrolled as a Kart driver. By the time he was eleven, he knew he wanted to do Kart-drive.

Professionally gave his career start his utmost attention. This saw him gradually growing up and following the steps of his super Dad- even grabbing his looks. 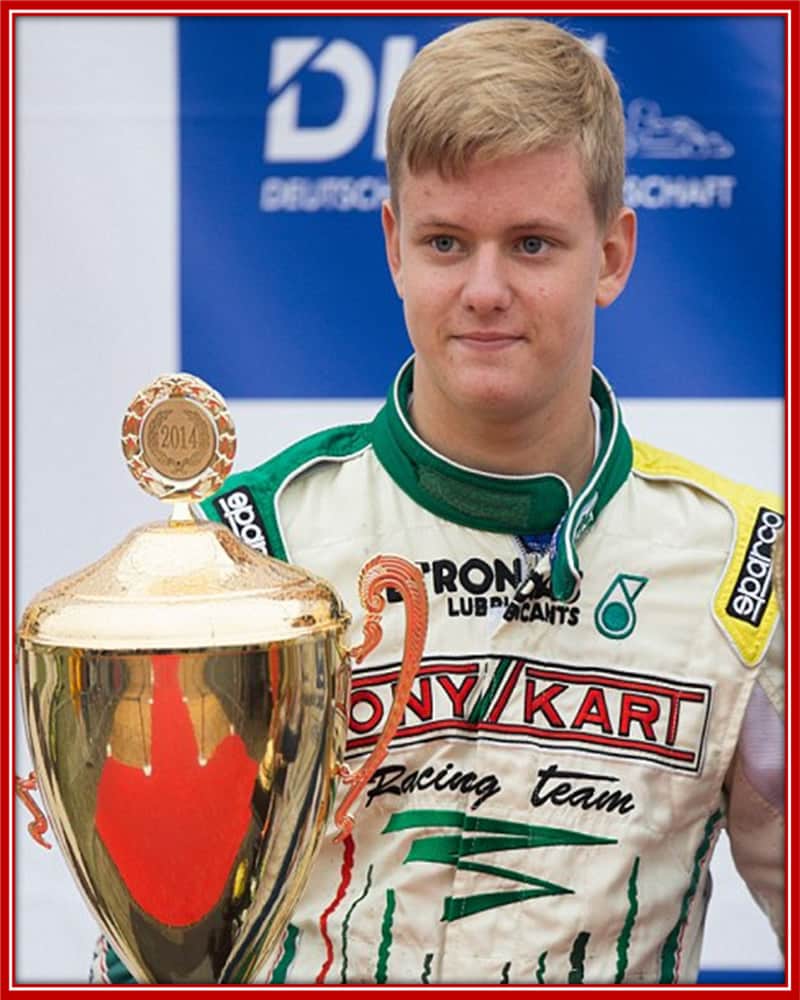 During the years 2011 and 2012, the youngster drove ADAC Kart Masters’ KF3 Class car.
He didn’t just begin winning as he did manage 9th and 7th place early on.

A gradual rise came as he secured third place in the 2013 German Junior Kart Championship.

Enrolling, in the International Junior Kart Championship, Mick finished second in the competition- a feat which showed another rise.

At this stage, his performance drew the interest of the press. This was a time, Jenzer Motorsports asked Mick for a test drive of one of their supercars. At this time, he saw himself gradually fitting into the shoes of his Legendary Dad. 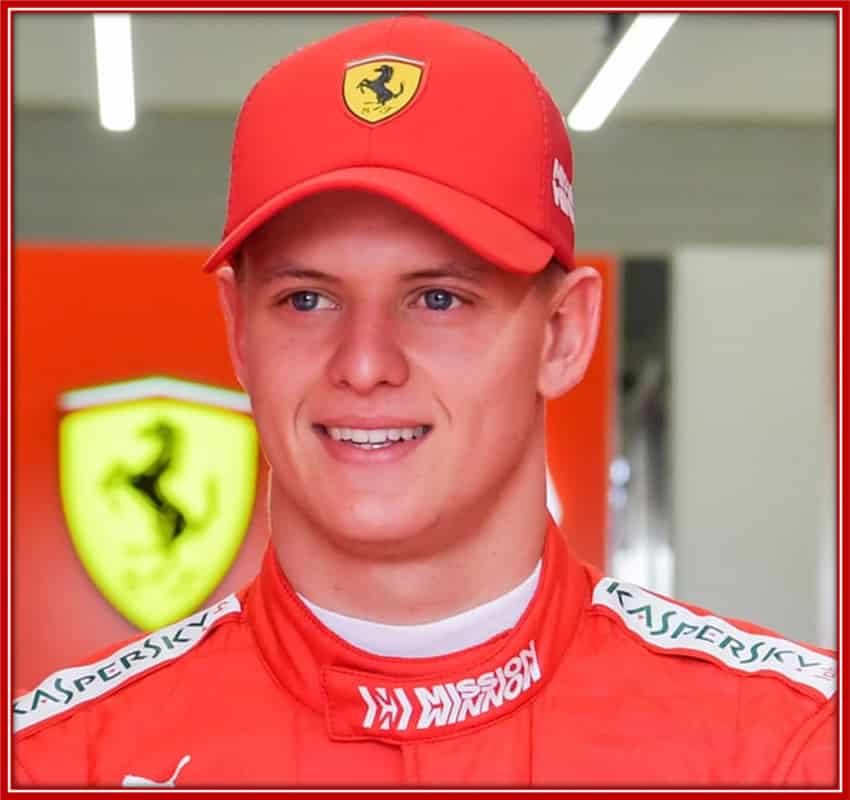 In 2015, Van Amersfoort Racing signed Mick to race for the formula class for the very first time during his career. Following shortly in 2016, he competed in the upper Formula 2000 class and finished the series in 3rd place.

However, in 2018, Mick ended the FIA Formula 3 European season as champion, 57 points
clear of 2nd-placed Ticktum. At this point, it became clear he was going to make it big in no time.

Having been announced as a driver for Ferrari Driver Academy on 19 January 2019, he moved up to the FIA Formula 2 Championship.

Again, and gradually, he began getting closer to his father’s zone and this didn’t go without wins. 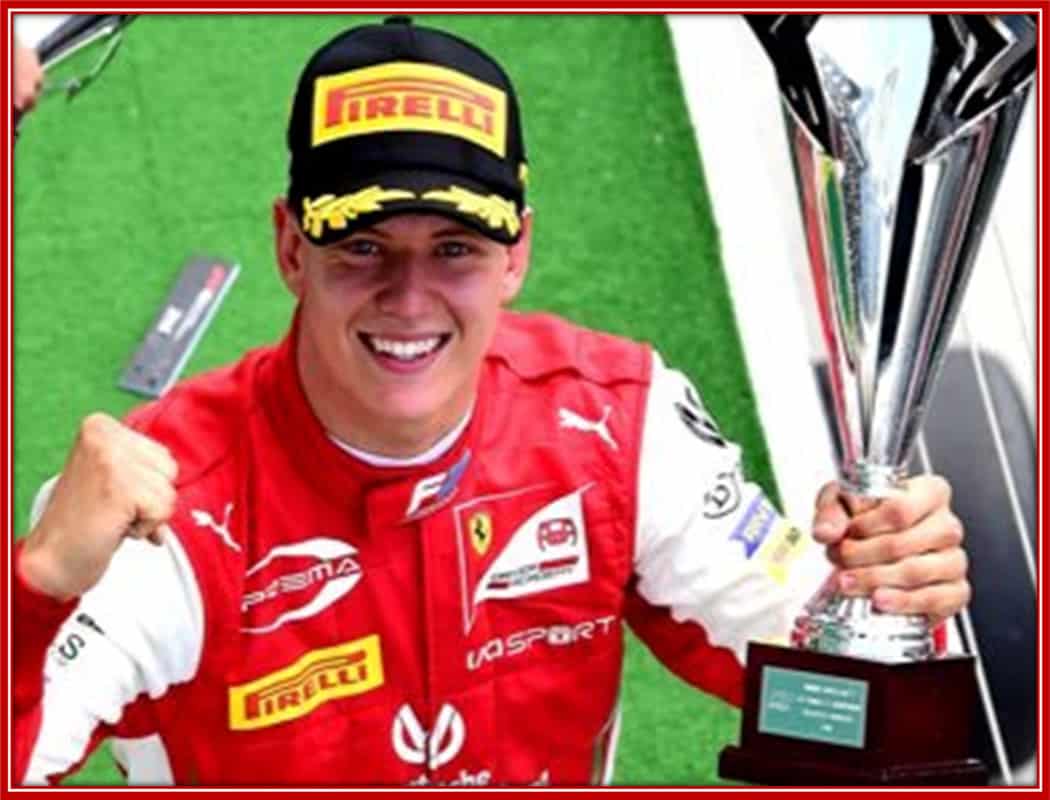 On 2 April 2019, Mick Schumacher finally made his debut behind the wheel of a modern Formula One car- piloting Scuderia Ferrari’s SF90.

He recorded a personal best time of 1:32.552 from 30 laps. A feat like this did place him as sixth fastest amongst other drivers.

Thou not there yet, the German Racing Driver is surely living his family legacy. Hopefully, in n time, he will eclipse his dad. The rest, as we say, is history.

The German race driver, no doubt, has millions of admirers around the world. Many of them are females who aspire to be his girlfriend, wife, or simply the mother of his child or children.

Rumours have it that he has, at least being in one relationship but single at the time of writing his Bio.

Just like Max Verstappen, it isn’t easy to separate his achievement without mentioning one or more members of his household.

Here, we’ll tell you much about Mick Schumacher’s parents starting with the head of his brood.

Over the years, lots have been spoken about the German racer legend who did everything to ensure his son continues living the family dreams.

Mick Schumacher’s Dad is a German retired racing driving legend born on the 3rd day of January 1969. He was born to a Bricklayer dad, in North Rhine-Westphalia, Germany. 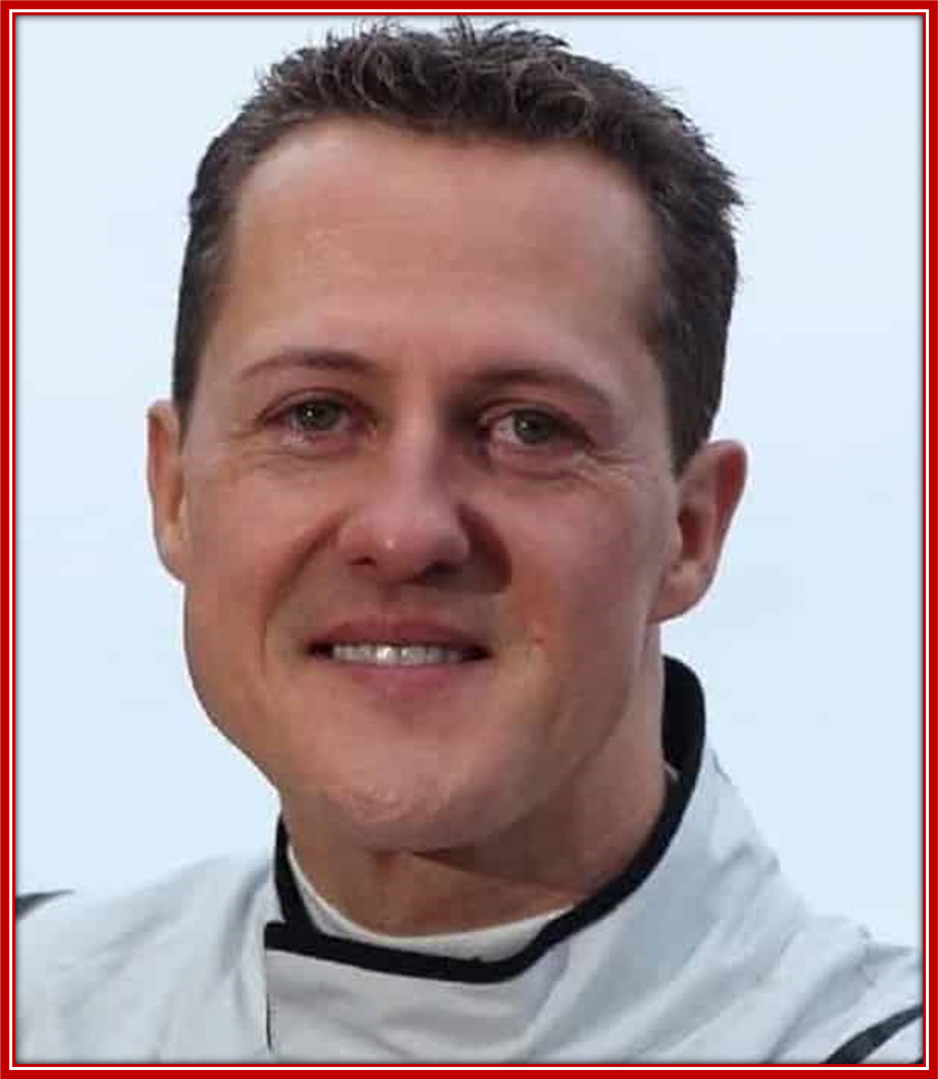 During his time, Michael became the only driver in history to win seven Formula One World Championships, five of which he won consecutively.

He got married to Corinna Betsch, and both were blessed with two children, Mick and his sister, Gina-Marie. Here is a photo of the cute couple- Michael and Corinna, during their wedding.

The award-winning Dad hardly fancies the celebrity spotlight the media throws at him. More so, he does enjoy riding horses, skiing, and playing football.

It’s however unfortunate Michael had an accident while skiing with Mick in the year 2013. Sadly, the German race legend got medically induced to coma because of a traumatic brain injury.

Thankfully, as time went on, Michael regained consciousness. He was known to still have muscle atrophy and osteoporosis due to confinement for over six (6) years to his bed. As a result, he has not been on the public scene since his accident.

First and foremost, she is also a sportsperson- a winner, just like her husband. Corinna Schumacher née Betsch is a talented horsewoman who once won the European Championship in western style for horse riding.

Corinna was born on the 2nd day of March 1969 to Gabriele Betsch her mum. Today, the mother of Mick is referred to as a German animal rights activist and accomplished horse rider. Like her husband, She appears to be very close to her son. 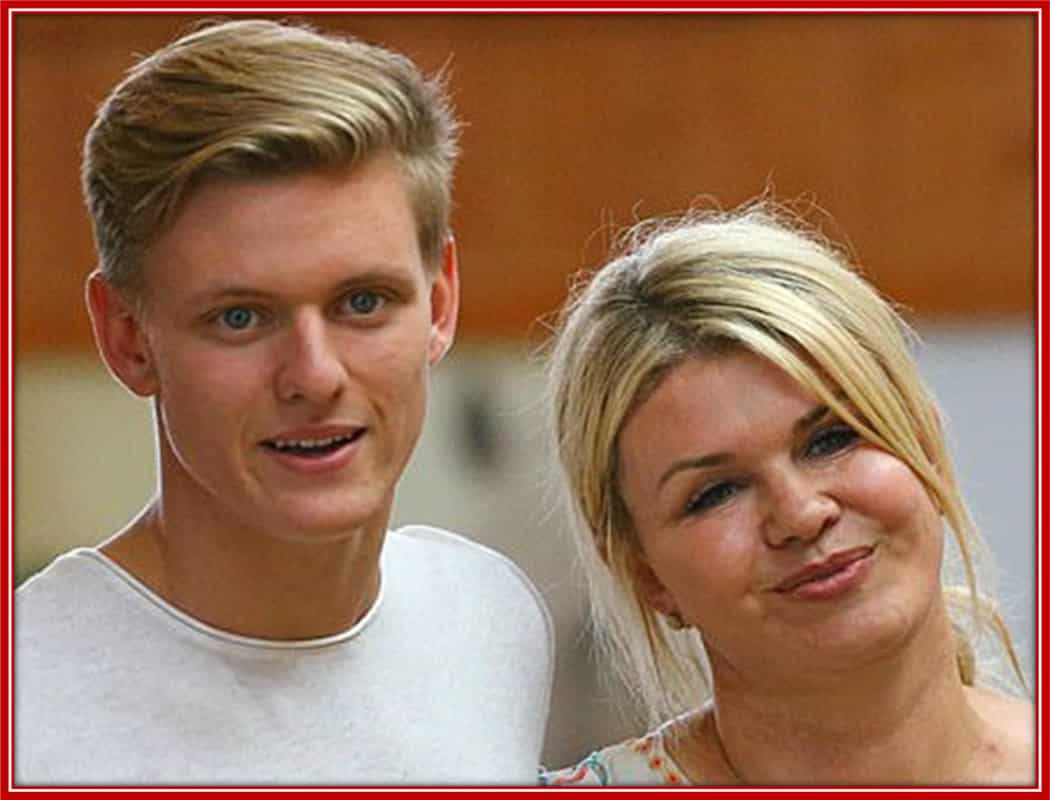 Thanks to her hobbies, Corinna and Michael does own horse ranches in Switzerland and Texas, US. Since her husband’s skiing accident, she has remained supportive in taking care of him.

With lots of sports lovers in his sporting family, there is no surprise that his elder sister, Gina-Marie, wouldn’t take sports as her profession.

Like her sporting mum, Gina-Maria Schumacher is a horse rider. She was born on the 20th day of February 1997, two years before Mick. At the time of putting up this Bio, Gina-Marie rides horses at a non-professional level. 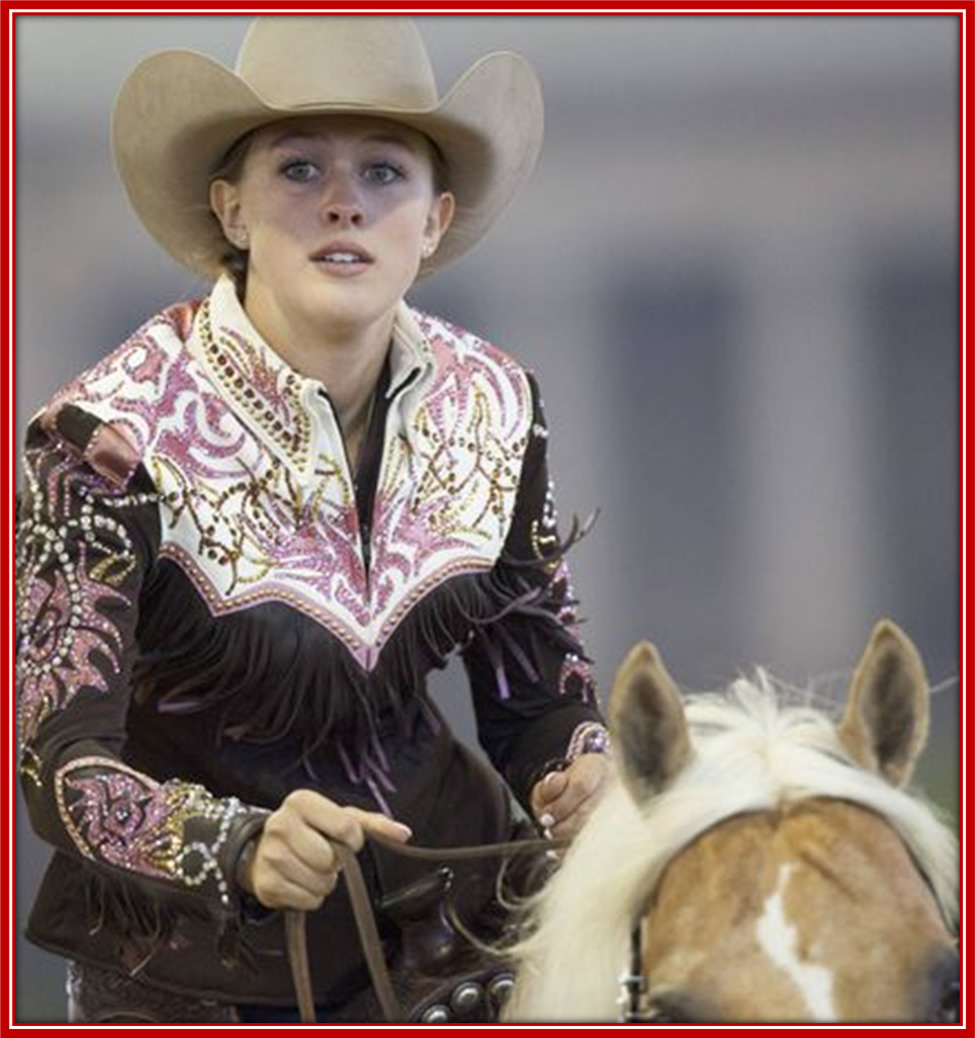 Looking at other members of the extended family, let’s begin with Micks’s uncle Ralf Schumacher. He did compete in Formula One for about ten years, from 1997 to the end of 2007.

Mick’s step-uncle Sebastian Stahl was also a professional racing driver from Belgium. Here is a cool photo of Ralf Schumacher, who is related to Mick’s dad. 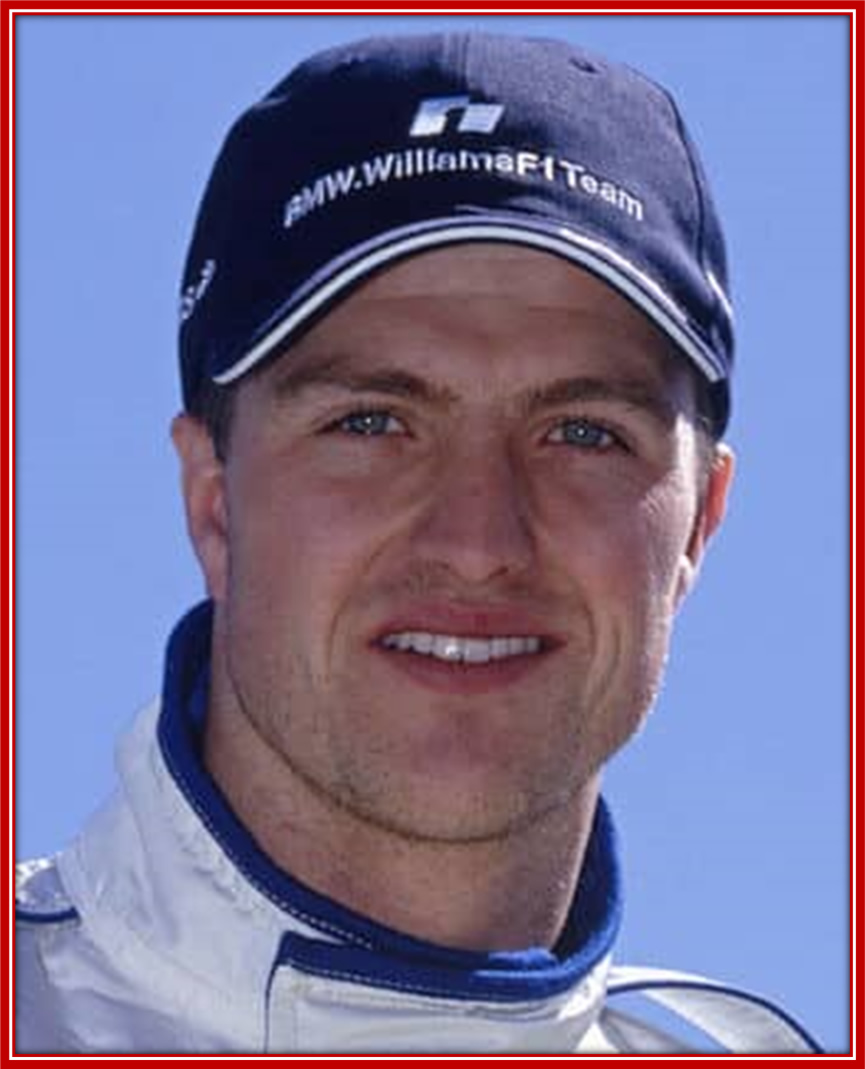 Last but not least, Mick’s cousin, David Schumacher, is also a racing driver. Not forgetting, is the Race Driver’s grandparents, who are Elizabeth and Rolf Schumacher.

Viewing deeper, but away from his blooming career life, we describe Mick as being calm. Also, a very polite and welcoming person- one who is comfortable talking with everyone and showing interest in conversations.

The truth is, Mick loves to stay humble in avoiding the fame of his Dad getting to his head. Mick is seen here with friends after a charity football march- what a humble personality. 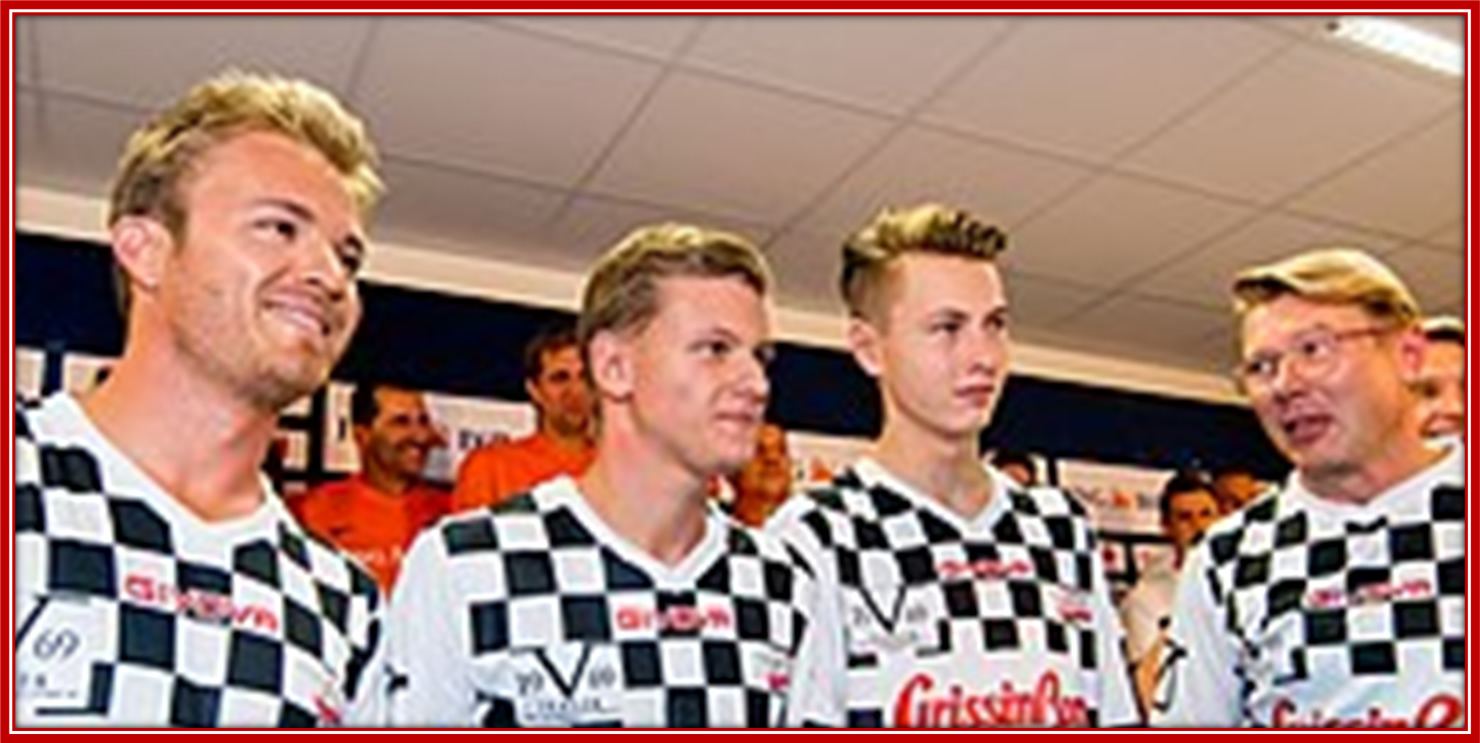 Like his Dad, the race driver enjoys playing football as a hobby and references no other than his father as his mentor.

Do you think he has a lavish way of life? The truth is,… he doesn’t. Although, despite Mick’s character of trying to hide from the limelight, he does possess great assets which reveals his inert flamboyancy.

They have a property that boasts a mighty garage capable of containing more cars than you can imagine.

Seeing this for the first time brings no surprise since his dad is reportedly worth more than half a billion dollars in retirement. 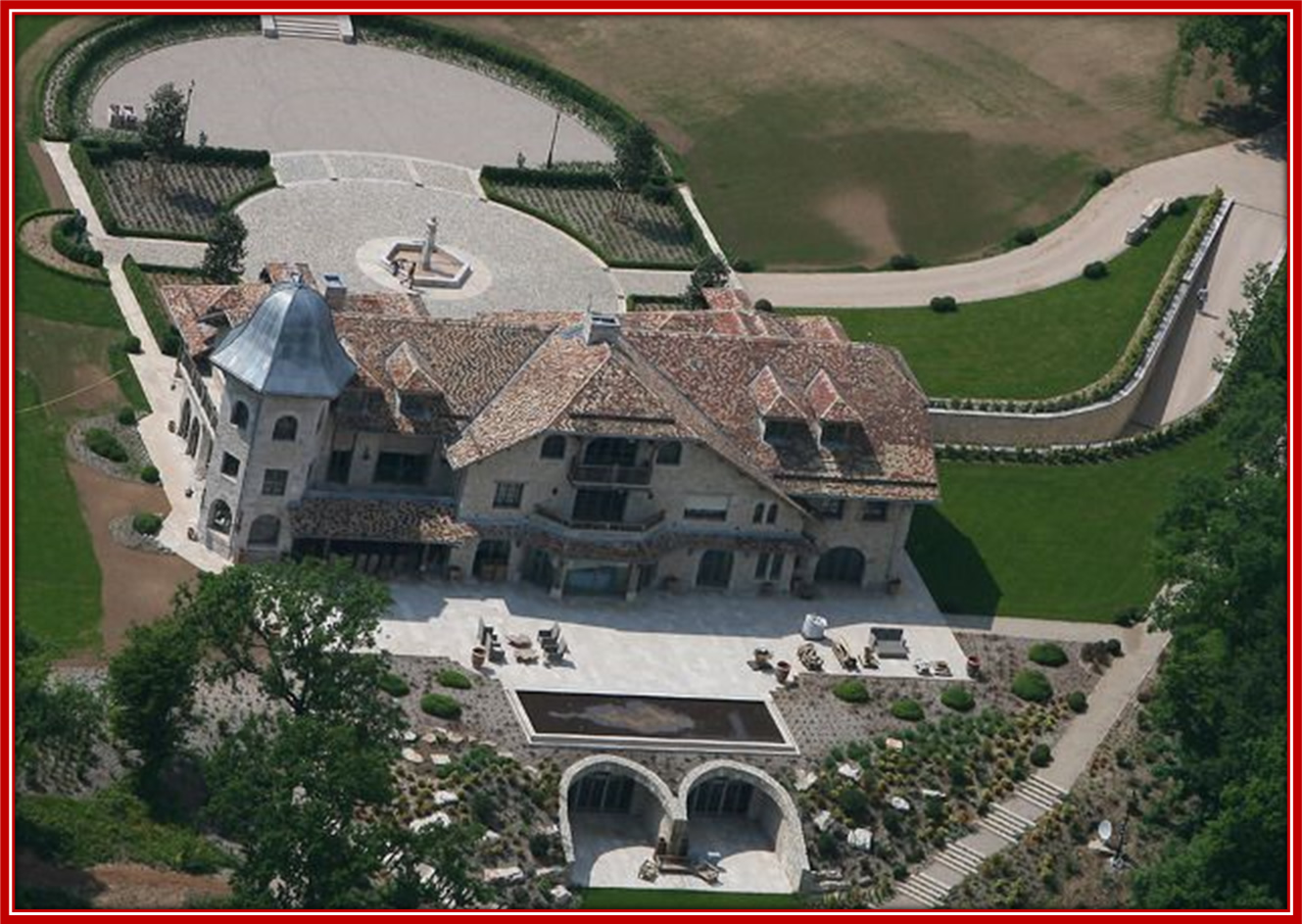 The primary source of his wealth hovers around being a professional Car racing driver. Despite his young age and relatively still growing successful career, his net worth- around $5 million dollars does look impressive.

In 2014, at the age of 15, Mick had a terrifying ‘100mph crash’ while practising on the Lausitzring speedway track in Brandenburg, Germany.

This came just days after starting his F4 career. Thankfully, the crash didn’t see an end to his career.

Just like his Legendary Dad, Mick is also a Catholic and does follow its teachings. Once in 2015, his father spoke of his emotional meeting with Pope John Paul II.

As reported by the Express, friends of his family do go on pilgrimage to the Catholic shrine of Lourdes to pray for the recovery of his dad.

In the course of reading this Bio, we learned that Mick Schumacher’s parents, especially his Dad have been the major influence in his career development and career decision-making.

Coming from a sports family also contributes to his outstanding personality as a race driver.

Without a doubt, now more than ever is the right time for Mick to continue living the dreams of his Dad who haven’t had the best of years lately.

Thanks for taking out time to read this impressive Biography of Mick Schumacher. Kindly stay tuned for more F1 Childhood Stories. That of Oscar Piastri, Kevin Magnussen and
Alex Albon will interest you.

Kindly let us know your thought on the Race Driver. Also, alert us if you see something that doesn’t look right in our Memoir.