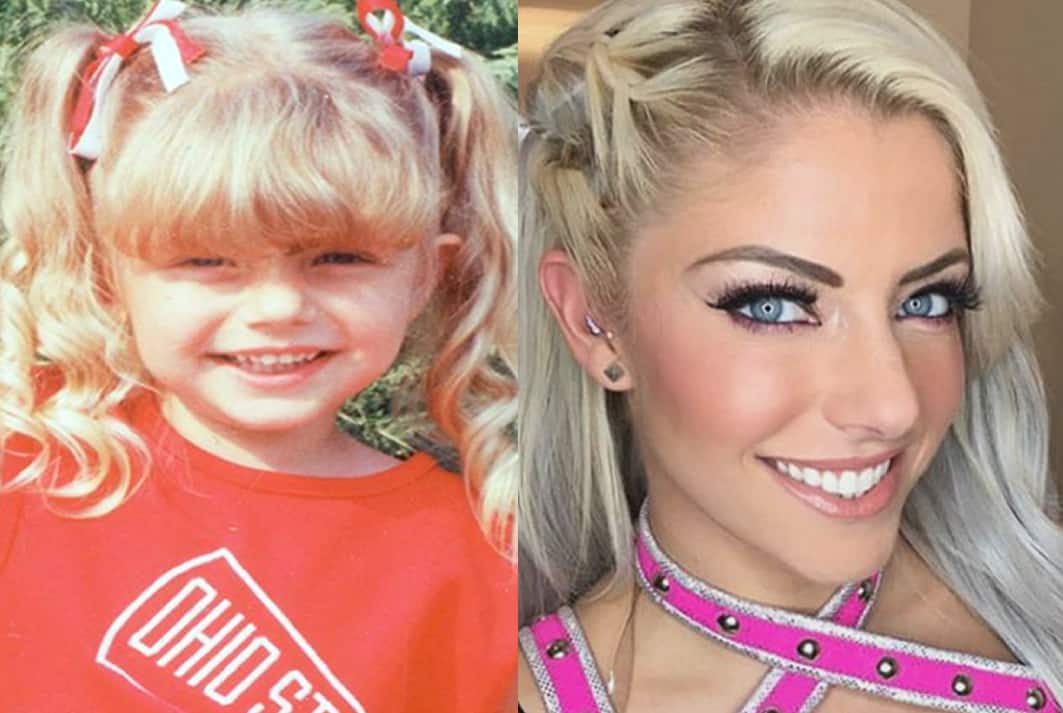 Childhood Biography presents the Full Story of an American professional wrestler with the nickname “Lexi“.

Our Alexa Bliss Biography Facts brings you a full account of notable events from her childhood time to date.

The analysis of the beautiful American professional wrestler involves her early life, life story before fame, family background, and personal life. More so, other OFF and ON-Screen little-known facts about her.

Yes, everyone knows she is one of the most accomplished female wrestlers in the WWE. However, only a few consider Alexa Bliss’ Biography, which is quite interesting. Now, without further ado, let’s begin.

For starters of her Biography, Alexa Bliss (christened Alexis Kaufman) was born on the 9th day of August 1991 at Columbus in Ohio, USA. She is the only child born to her mother Angela Kaufman and to her father Bob Kaufman.

Baby Bliss was ushered into the world by teenage parents who were not fully prepared for raising kids. Her mother was 18 years old at the time, while her father was 17.

Consequently, the teenagers struggled to adapt to being parents amidst low income. Notwithstanding, they gave Bliss the best of childhood experiences, including taking her on annual visits to Disney World in Florida.

Responding, Bliss grew up as a happy kid with her parents at Columbus and exhibited signs of healthy upbringing by recording active participation in softball, track, as well as gymnastics from the tender age of 5.

While at the school she blended academics with sports and cheerleading. Away from school, Bliss loved watching wrestling at home.

She was a fan of wrestling legends at the time and idolized Rey Mysterio because his in-ring acrobatics appealed to her interests in Gymnastics.

The period which coincides with Bliss’ early teens also saw her shed a lot of weight because she felt insecure under her skin and wanted to look just perfect.

This led her to develop health complications from an eating disorder known as Anorexia. The disorder was so terrible that it became life-threatening for the then 15-year-old.

She, however, overcame it by embracing bodybuilding, an activity that helped increase her energy intake.

Bodybuilding thereafter became an important routine for Bliss all through the rest of her high school days. She also stuck with the activity during her tertiary education at the University of Akron Ohio.

Upon graduation from the University, Bliss continued with bodybuilding and became one of the youngest women to be awarded a pro-card in the activity. She, however, didn’t fancy pursuing a career in bodybuilding.

This led her trainer to inform her about an open window for WWE tryouts at the time.

She fulfilled online requirements for the tryout, including submitting a video of herself signifying an interest in the profession. Bliss was thereafter invited for interviews and eventually signed to WWE in 2013.

After being signed by WWE, Bliss was transferred to the media company’s developmental territory. NXT.

While at NXT, Bliss was assigned the ring name “Alexa Bliss” and rose to become one of the most formidable female wrestlers in the territory.

Although Bliss didn’t win the NXT Women’s Title, she gave contenders a hard time and pushed them to their limits.

Subsequent wrestling endeavours saw bliss drafted to the SmackDown brand, where she rode on winning streaks.

At the peak of her winnings, she defeated Becky Lynch to become SmackDown Women’s Champion in December 2016.

Months later, Bliss was drafted to Monday Night Raw where she won the RAW Women’s Title in a matter of weeks.

The feat made her become the first female superstar to have won both the SmackDown and Raw Women’s Title. The rest, as they say, is history.

Bliss is yet to get married. We bring you details about her dating history and current relationship life.

Starting off with her dating history, there are no records of Bliss’ past relationship life. She’s only known to be having a love affair with her boyfriend and wrestler, Matthew Adams (with the stage name, “Buddy Murphy”).

The duo met and began dating while Bliss was wrestling at WWE’s NXT developmental territory. They have successfully kept their relationship under the radar and are most likely to tie the knot anytime soon.

Bliss was born into a family of three. We bring you factual information about members of her family.

Bob Kaufman is Bliss’ dad. The proud father of the wrestler has a towering impressive heigh when compared to Bliss and her mom.

He has been of great support to Bliss’ career and even put up an appearance at the TLC pay-per-view in American Airlines Center, Dallas to watch his daughter win the SmackDown women’s title.

Angela Kaufman is Bliss mom and her lookalike. Angela so loved Bliss that she freaked out when told about the wrestler’s WWE ambition.

You are five feet, and you’re 100 pounds. You’re going to get killed in the ring.’

I was like, ‘No. it’s fine. I’m athletic. I can handle it.’ I definitely went against my parents’ words and tried out, and I’m so glad I did.”

Said Bliss in an interview with Miami Herald.

It was only a matter of time before Angela became proud of her daughter’s profession and even greeted Bliss at the backstage after she won the SmackDown women’s title.

Bliss has not a single brother nor sister, given that she’s the only child born to her parents.

Personal Life away from wrestling:

Bliss is a 5 feet tall beautiful blonde with a nice figure and a gorgeous smile. At least that’s what meets the eye but beyond her physique is a scrappy and tough-minded ambitious girl lady who has been a star in every walk of life.

The wrestler has a nice voice she inherited from her grandfather who was a country musician.

This among many attractive traits of her magnetic personality has won her the permanent friendship of many including Nia Jax.

Regarding her hobbies and interests outside wrestling, Bliss loves singing, watching movies, and is a huge fan of Ice Hockey. In the same light, she still makes trips to Disney land as it evokes memories of her childhood.

FACT CHECK: Thanks for reading our Alexa Bliss Childhood Story plus untold biography facts. At childhood biography, we strive for accuracy and fairness. If you see something that doesn’t look right in this article, please place your comment or contact us!