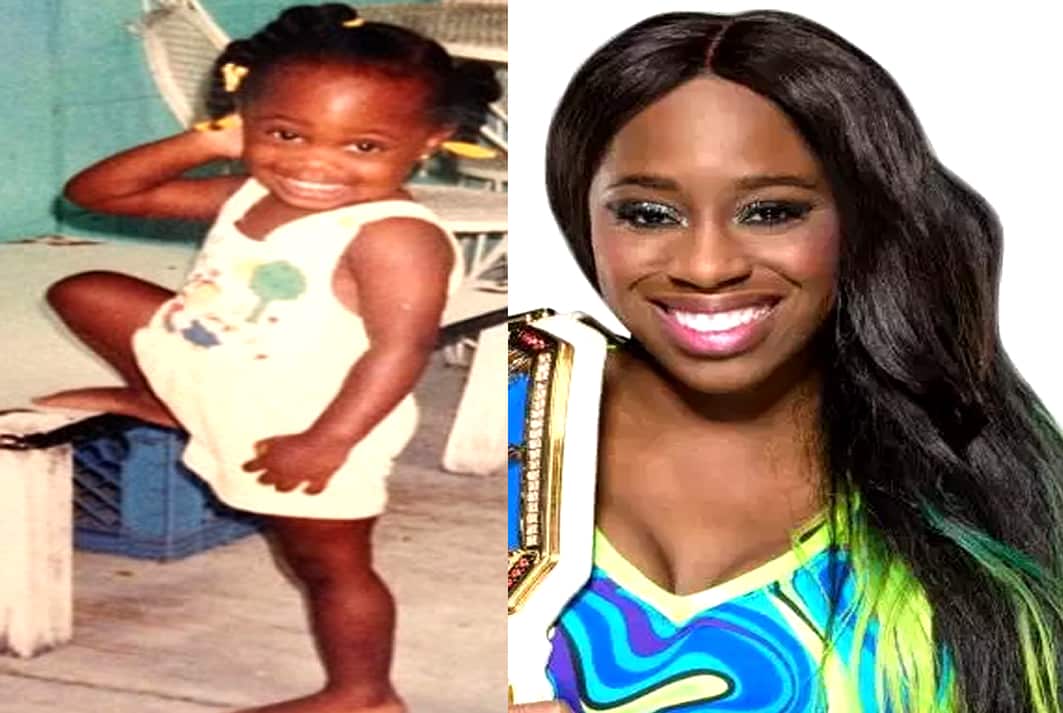 Childhood Biography presents the Full Story of a female WWE Star with the nickname “The Glow” & real name; Trinity Fatu.

Our Naomi Childhood Story plus Untold Biography Facts brings you a full account of notable events from her childhood time to date.

Yes, everyone knows she is one of the most admired black female wrestlers in the WWE.

However, only a few consider Trinity Fatu’s Biography, which is quite interesting. Now, without further ado, let’s begin.

For Biography starters, Naomi (christened Trinity McCray) was born on the 30th day of November 1987 at Sanford in Florida, United States. She was born to her mother, Grace, and to her father, McCray.

The American national of black ethnicity with Afro-American roots was raised by her parents in Florida, where she grew up in the neighbourhoods surrounding Orlando.

Growing up in the neighbourhoods alongside her elder brother, young Naomi had a happy childhood that was characterized by frequent visits to Wet ‘N Wild theme park at Orlando.

In addition, Naomi loved dancing, an activity she became actively involved in from the age of 8 and sustained by taking up classes in tap, jazz, ballet, lyrical, modern, and hip-hop.

Thus, at peak of her high school education, Naomi had already amassed numerous medals, which she won from participating in both state and national dancing competitions.

The development emboldened her to audition for NBA Orlando Magic which offered her first real job as a dancer and cheerleader.

She held the job between 2007-2009 and also starred as a background dancer for rapper Flo Rida within the period.

Naomi was still with NBA Orlando Magic when a WWE show and the WWE Divas came to Orlando in 2009.

The then 22-year-old, who had never seen live wrestling, decided to attend the show and instantly fell in love with wrestling.

“I just knew it was something that I wanted to be a part of,” she said. “I saw all the girls’ muscles, and I was so excited watching that I just started picturing myself being in there. From there, I got a tryout, and I’ve been here ever since.”

Unlike most professional wrestlers, Naomi never got to wrestle for promotions before joining WWE. This is due to the fact she was signed to WWE in August 2009 after having a tryout with the entertainment that year.

Upon signing the contract, Naomi was given the ring name “Naomi” and assigned to WWE’s former development territory – Florida Championship Wrestling (FCW).

It was at the territory that Naomi’s debuted in a mixed tag-team match that saw her partner Alex Riley to face AJ Lee and Brett DiBiase in a losing effort.

Moving on to greater heights, Naomi made her main roster debut alongside Cameron as valets for a wrestler, Brodus Clay.

The duo (Naomi and Valet) were dubbed “The Funkadactyls” during the debut and were thereafter engaged in a team feud with the Bella Twins.

At the peak of their partnership, The Funkadactyls were merged with Clay, and Tensai to form “Tons of Funk”.

Naomi remained relatively unknown and was involved in numerous singles between 2014-2016.

Highlights of her career during the period was her involvement with The Uso’s feud (in December 2014) and team up with Naomi and Sasha Banks to form Team B.A.D. in August 2015.

July 19, 2016, was the date which Naomi was drafted to the SmackDown brand. She made her debut days later on August 16 and thereafter, lost a tag team competition as well as a six-pack elimination challenge.

Months later, in February 2017, a relentless Naomi defeated Alexa Bliss at Elimination Chamber to win SmackDown Women’s Champion Title for the first time. The rest, as they say, is history.

Naomi is a married woman. We bring you information about her marital life, including how she met and married fellow wrestler Jonathan Fatu (aka Jimmy Uso.)

The couple met at WWE in 2009 after being signed to the entertainment that year. It wasn’t long before they started dating and were known to be a pair by fellow wrestlers.

Jimmy went ahead to tie the knot with Naomi years later, on the 16th of January 2014. With the marriage, Naomi becomes a member of the Anoa’i family, which is a renowned Samoan-American wrestling dynasty.

Notable members of the dynasty include Roman Reigns, The Rock, Rikishi, Yokozuna and Umaga.

Although no child has been born of their union, Naomi serves as the stepmother of two children – Jayla and Jaciyah Fatu – born to Jimmy from a previous relationship.

Naomi Fatu with her husband, Jimmy Uso, and her step-children, Jayla and Jaciyah Fatu. Credits: Nimbus.

Naomi was born into a little-known family. We bring you factual information about members of her family.

About Trinity Fatu or Naomi’s father:

McCray is Naomi’s dad. He is a bit light-skinned and stands at a towering height when compared to his wife and daughter.

McCray shares an extraordinary father-daughter bond with Naomi such that he couldn’t help seeing her in a white gown on her wedding day. Above all, he loves and never ceases to support her.

About Trinity Fatu or Naomi’s mother:

Grace is Naomi’s mom. Grace used to be inseparable from Naomi, with whom she had special moments before giving her away for marriage.

Although Grace was initially shocked by Naomi’s decision to become a wrestler, the loving mother supported her daughter and now enjoys watching her on TV.

About Trinity Fatu or Naomi’s Siblings:

Naomi has a brother who is the male version of her. There is no ruling the possibility that she might have other brothers and a sister as she doesn’t reveal much about her family.

Personal Facts away from wrestling:

Naomi is an approachable black beauty who is cheerful, bubbly and happy. What’s more? She smiles a lot and doesn’t mind being playful.

The inspiring wrestler has not had any surgery to augment her looks, nor does she have any tattoos.

She surprisingly hates working out but keeps fit by moderating the way she eats and doing just 30 minutes of cardio three times a week.

Regarding her hobbies, Naomi loves singing and dancing. She also has interests in football and basketball games.

Naomi has an estimated Networth of ‎$165,000 but doesn’t live below her means. Thanks to the love showered on her by her husband, Jimmy Uso, The couples live happily at their residence at in Pensacola, Florida, with their kids, Jayla and Jaciyah Fatu.

Speaking of her mobility needs, there is no dismissing the possibility that Naomi has numerous exquisite cars, even though she has been only spotted driving a lowrider, that speaks well of her diva status.

Naomi is the first African-American woman to win the SmackDown Women’s Championship Title. She also exhibits great strength of character by dealing with racist fans in the best possible way she can.

Naomi also played the role of “Murphy” in the action movie The Marine 5: Battleground (2017). 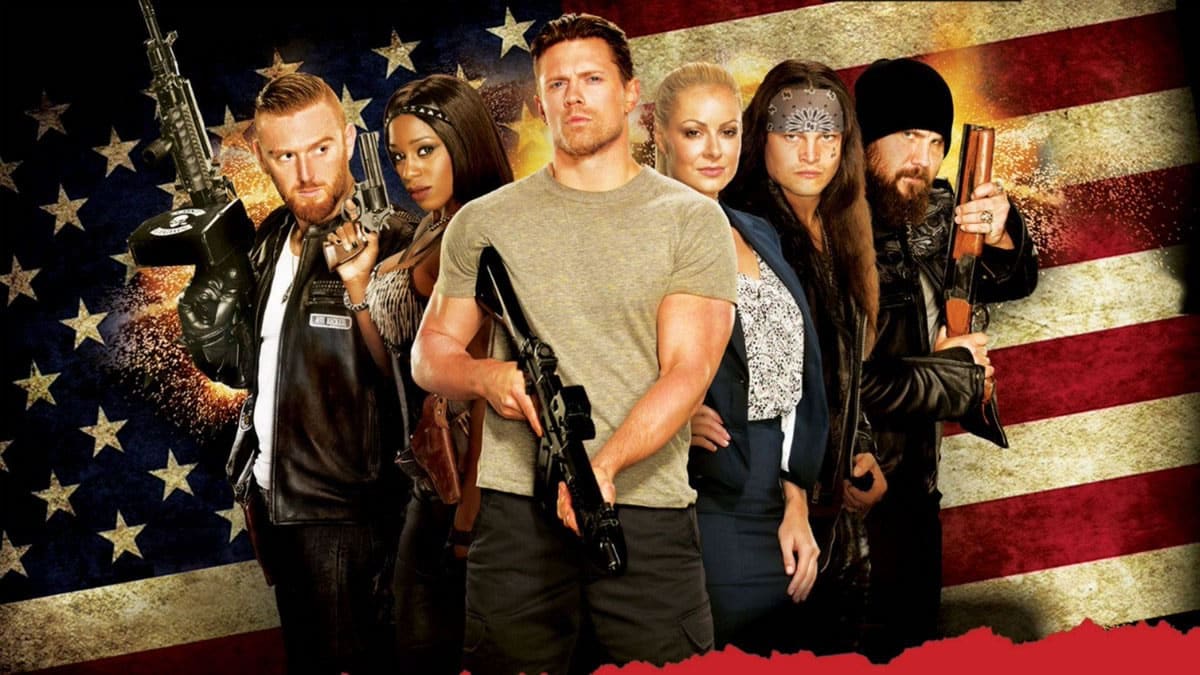 The WWE Celeb released her first single song entitled “Dance All Night” In May 2014. The accompanying music video (found below) was released not long after on WWE’s YouTube channel.

Thanks for reading our Trinity Fatu (Naomi) Childhood Biography Story.

At childhood biography, we strive for accuracy and fairness in our quest to deliver you WWE Superstars’ Biographies.

u look like my brothers girlfirend and u are so beteful