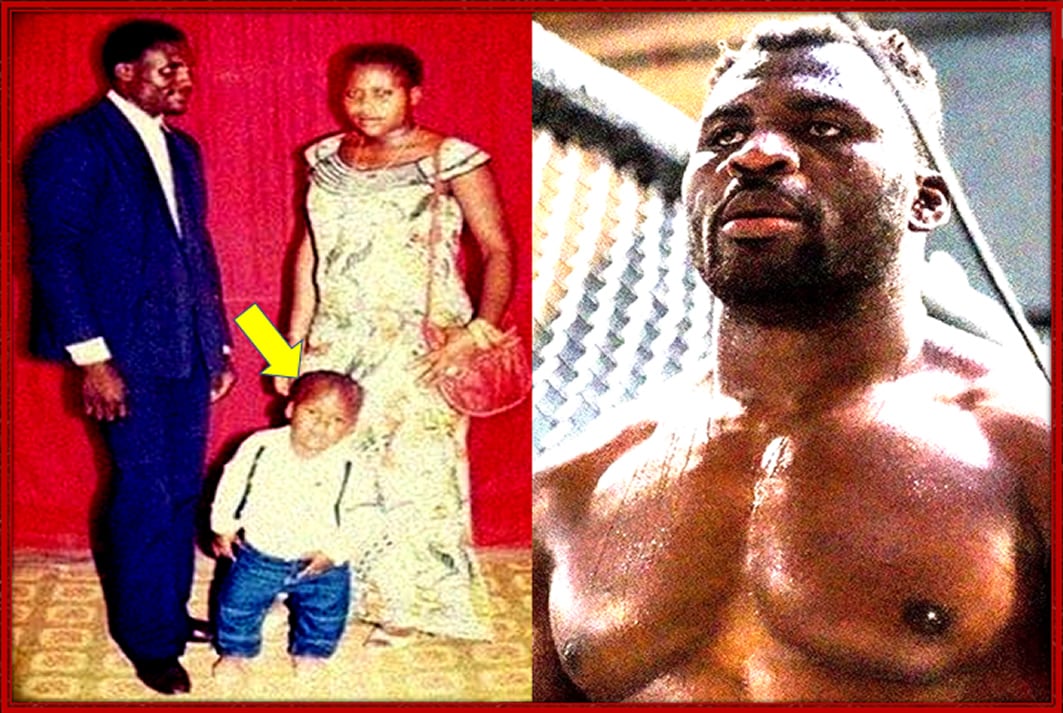 Simply put, we present you with the mixed martial artist’s life journey, from his early days, to when he became famous.

To whet your autobiography appetite, here is his childhood to adult gallery — a perfect summary of Francis Ngannou Bio.

Yes, everyone knows he is the reigning UFC Heavyweight Champion (as of 2021). However, only a few individuals know about the tragedy he experienced before becoming successful. Without much ado, let’s feed your curious appetite with his fascinating Biography.

For Biography starters, many fans call him by the nickname “The Predator”. Francis Ngannou was born on the 5th day of September 1986 to his Cameroonian father and mother at Batie, Cameroon.

He came to this world as the third of five children born of the union between his parents. Below is an adorable photo of 3 years old Francis with his father and mother.

Like every little child, the upcoming artist enjoyed spending time with his parents. Back then, his father had a terrible reputation for getting into brawls on the streets.

Sadly, his actions caused many problems for young Francis, who had to endure all the mockery people made of his father.

Moved by the ardent desire to make up for dad’s shortcoming, Francis decided to pursue a life in boxing. At least, he believed that harnessing his strength into sports is a positive way to utilize his energy.

The Childhood of the upcoming MMA icon was not always rosy. At 6, his parents got divorced while he was sent to live with his aunt. Sadly, his little mind could not comprehend the entire ordeal.

After some time, Francis returned home to live with his mother and siblings. Thankfully, the sad little boy became cheerful once again as he spent some time with his family.

Do you know?… Different local gangs in his village persuaded him to join them. However, their efforts were to no avail.

Following his parents’ divorce, Francis’ mother was tasked with the ultimate responsibility of catering for their needs. This time around, his family did not struggle against depression. Rather, their fight was against poverty.

It was quite unfortunate that his household could not even afford to eat breakfast or even launch. They were at their worst moment.

Although every member of his family got involved in one menial job or the other, it was not enough to help them break out of their financial crisis.

The talented fighter is a native of Batie. His homeland is located in the western region of Cameroon and is about 208 km from the country’s capital city (Yaounde). Batie is known for its MTN Elite one club (Sable FC).

However, Francis did not give any attention to football. Rather, he wanted to use his strength to achieve success and fame in boxing.

As earlier stated, the predator grew up in a poverty-stricken home. Because of his family’s financial status, Francis and his siblings often journey for two hours on foot to get to school. Sometimes he couldn’t stay till the end of his class before running home because of hunger.

Each passing day seemed to present the worst experience for the little boy who started working at a sand quarry at 10.

Despite being too young, Francis worked as hard as other adults to earn money and sponsor his education. Perhaps all the hard work has contributed to his extravagant strength over the years.

“I was ten years old when I started mining in the village. Even though the work was meant for adults, I didn’t have any option. All we did is to take what we are offered.”

For seven years, the Cameroonian mined sand and rummage different trash in search of food.

Sadly, Francis’s earnings could no longer cover his academic expenses. Hence, he dropped out of school and took up different jobs to survive.

In 2008, the talented fighter took a bold step towards realizing his dream. He sold his motorcycle to enroll in a boxing gym.

Of course, most of his peers mocked his actions and called him names. Some even thought he had gone crazy as he dares to sell his major source of income.

As if the universe was in a duel against his success, Ngannou became seriously ill and couldn’t continue training after a year.

By the time he clocked 26, he left his country, which has offered him nothing but pain and anguish.

Of course, his only resort was to move to Europe through illegal migration. On his quest, Ngannou encountered many obstacles and had a series of near-death experiences. However, he did not give up on his mission until he made it to France.

Roaming recklessly on the streets of Paris, the predator met his fellow compatriot, Fernand Lopez, who introduced him to the MMA factory.

Although Ngannou wanted to pursue a boxing career because he idolizes Mike Tyson, his new friend convinced him to try MMA. Thus, he slept and trained in the gym for free.

In November 2013, the predator started his MMA career. Back then, he fought in the regional and French promotions, where he made a name for himself.

Afterwards, Ngannou signed a contract with the UFC and debuted against Luis Henrique in December 2015. Surprisingly, he won the fight in the second round via knockout.

As I compile this Bio, the predator has defeated many UFC veteran fighters, including Alistair Overeem. On the 27th of March 2021, he brutally knocks out Stipe Miocic to claim the heavyweight title. The rest, as they say, is history.

Francis Ngannou Girlfriend and Wife to be:

It is often said that on the left side of a vigorous man stands a powerful woman who strengthens him by her character. Of course, the invincible fighter has been only involved in one relationship that we know of.

Rumour has it that Ngannou’s girlfriend is Miesha Tate. However, the UFC champion has not openly made any official comment about his relationship life.

Perhaps he does not want much attention to be given to his girlfriend. We suspect she prefers to remain out of the spotlight of his fame.

What makes the Mix Martial Artists thick?… First and foremost, he has got a blend of the Virgo zodiac traits. Apparently, he is extremely sensitive and quite humble. Like Cain Velasquez, Ngannou loves to relax in the swimming pool.

Interestingly, he also enjoys poetry and music. You would often see him tag along with his headset, even on match days. Moreso, he’s got an eye for balanced rhythms and beautiful songs.

No one would have imagined that the boy who many called “crazy” back in the days would end up earning up to $2,157,500 in his endeavours. As of 2021, Francis Ngannou has amassed an estimated Net Worth of $4 million.

Yes, the poor boy from the slum now enjoys a luxurious lifestyle which is noticeable by his exotic cars and beautiful houses.

For the UFC champion, the informality of family life is a blessed condition that allows him to become his best while looking for the worst.

Of course, his undying desire to support his household is unfathomable. Hence, we present you with complete information about his parents, siblings, and relatives.

Rather than becoming an idol that his little boy could look up to, Ngannou’s dad became more of a troublemaker. The only memories he left for his children were that of his violent nature.

It appears that Francis’ father was quite an agile man who prefers to use his strength in a brutal way.

He often beats up his children and their mother as well as gets into brawls on the streets. It was his abusive character that led to his divorce from his wife when Ngannou was only 6 years old.

The one person who has been through hell to raise the predator and his siblings is his mother.

Her sacrifice to ensure he survived the hardship that their family experienced can not be overemphasized. Thanks to Ngannou’s rise to fame, his mother could enjoy a better lifestyle devoid of poverty.

In the face of hardship, he often turned to his elder brothers for solace. Yes, Francis has three brothers and a sister. Together, they all struggled to survive their terrible childhood experience.

One of his elder siblings became a mechanic to support their family while Ngannou concentrates fully on martial art.

After his breakthrough in the UFC, he bought for his older brother a truck, which puts him at the upper command of the sand business.

As I compile this Bio, he has lost his grandparents to the cold hands of death. Obviously, they would have been proud of his achievements if they were alive today. Ngannou has an uncle (Maurice) who is 73 years old (as of 2021).

Even though much has not been said about the rest of his relatives, they are quite cheerful about his success thus far.

To wrap up the mixed martial artist’s Bio, here are a few facts about him that would help you get a complete knowledge of his Life Story.

During his illegal migration to Europe, there were several stop-offs on his journey.

First, he had to drink out of a dirty well containing dead animals after crossing the Sahara desert on his way to Algeria. Afterwards, his body was cut open by a barbed wire.

On six different occasions, he was dropped back into the desert as all his attempts were thwarted.

He then moved to Morocco, where he set his sights on entering Spain. Sadly, he was jailed for two months in Spain for crossing the border illegally by sea.

Promising Career in the Hollywood:

No doubt, he is an excellent martial artist. However, Ngannou will probably make a big name for himself in Hollywood. Yes, he will feature in the Fast and Furious 9 movie, which will be released in summer 2021.

One interesting fact about his Bio is his undying love for his country. Despite his enormous wealth, Ngannou still visits his hometown and eats their native dishes on the streets like he used to do before he became wealthy.

On several occasions, he has dressed in his native attire to major events and award ceremonies.

Francis Ngannou is a Christian who believes that men cannot live without a spiritual life. Of course, the predator often ensures he lives under his religious code of conduct.

One other interesting fact about Ngannou is that he dislikes inking. Hence, he has inked no tattoo on his body.

Finally, Ngannou’s success is something that his peers can hardly comprehend. Despite all the handicaps and terrible financial circumstances, he did not allow his problems to blur the vision of his dreams. Even ESPN acknowledged his resilience right before his tremendous breakthrough in the MMA.

Thankfully, he also had his mother and other family members who believed in him. Hence, when the journey got tougher, the thought of liberating his siblings and mom from poverty kept him going.

Perhaps, if his father had been present to support his endeavors, he might have achieved more or taken a different career path.

Asides from Francis Ngannou’s Bio, we have other UFC stories for your reading pleasure. The Life History of Gilbert Burns, Dustin Poirier, and Charles Oliveira will interest you

We appreciate you for reading our Francis Ngannou Biography. Kindly contact us if you find anything that seems wrong with our article.