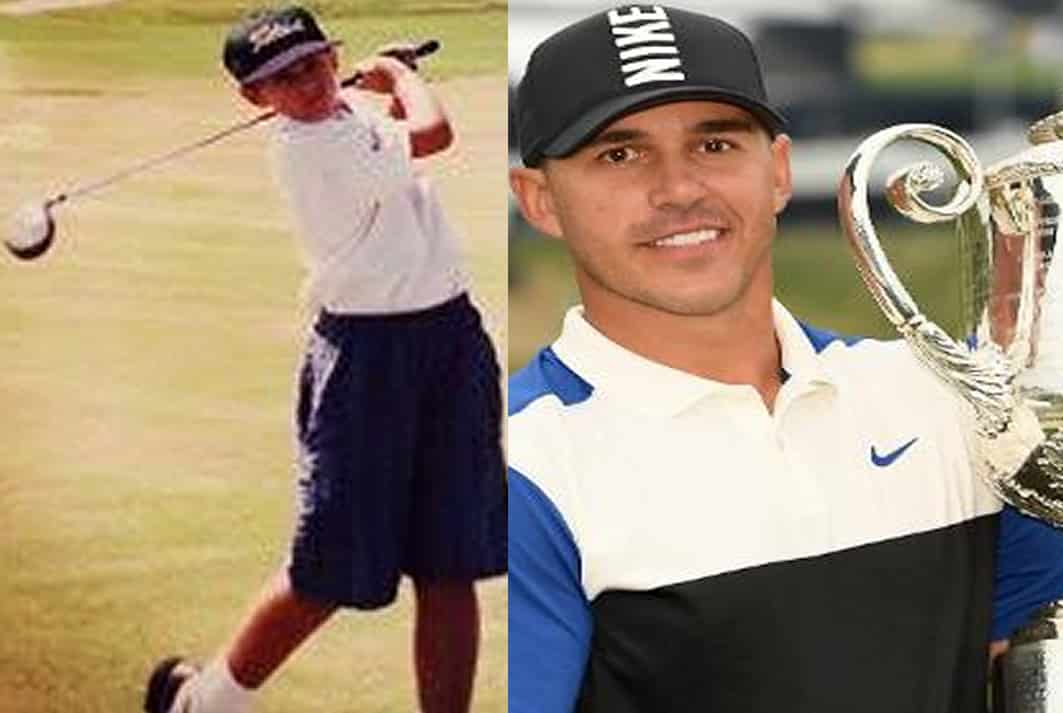 We present you the Full Story of an American Golf Player who is best known as “Golf’s Alpha Dog“.

Our version of Brooks Koepka’s Biography and Childhood Story brings you a full account of notable events from his childhood time to date.

Yes, everyone knows he is one of the best golfers in the world. However, not many golf lovers have considered reading Brooks Koepka’s biography, which is quite interesting. Now, without further ado, let’s begin.

For Biography starters, Brooks Koepka was born on the 3rd day of May 1990 at West Palm Beach, Florida, USA.

He was the first of two children born to his mother, Denise Jakows and to his father, Bob Koepka. Behold, Brooks Koepka’s parents.

The American national of white ethnicity with Polish and German roots was raised at his birthplace in West Palm Beach where he grew up alongside his younger brother, Chase Koepka.

Growing up at West Palm Beach, Young Brooks was a passionate baseball player who enjoyed playing the sport with his peers and family. It is important to note that baseball ran in Brooks’ family genes.

His great uncle, Groat was a College Baseball Hall of Famer while his dad, Bob also played the sport as a pitcher at West Virginia Wesleyan.

It was only natural that love for the sport was passed down to Brooks who became heavily invested in it during his early life.

The Golfer’s educational background includes his studies at Cardinal Newman High School in Florida. While studying at the school, Brooks continued to engage his passion for baseball.

By the time the baseball enthusiast was aged 10, he was involved in a road accident that saw him sustain injuries that sidelined him from playing contact sports.

Not one to eat the fruit of idleness, Brooks began spending quality time at West Palm Beach’s public Okeeheelee Golf Course where he got enrolled in a junior golf program.

He dominated in the game and thereafter adopted it as a sport he wanted to build a career in.

Thus began Brooks’ career buildup in Golf which he continued playing after his graduation from high school and while studying science at Florida State University.

College golf turned out to be an indicator of a bright future for Brooks in the sport. He took Golf seriously by practicing for long hours on green courses over the years.

It wasn’t long before Brooks began reaping rewards for his efforts as he won three events, lead Florida State to a semifinal run at the 2010 NCAAs, and was named a three-time all-American.

However, the golf prodigy never found a compelling reason to take his career to the next level until a disturbing event in his family life made him took vital decisions about his future in the sport.

Speaking of the turn of events in Brooks’s family life, his mother was diagnosed with a rare form of breast cancer called a triple-negative.

Receiving the sad news Brooks resolved to play harder in order to make his then health struggling mom happy.

Having won a few other non-major titles, Koepka entered the 2014 PGA Tour and finished third.

The significant progress was followed by a fourth-place finish at the 2014 US open after which he won his first PGA Tour event known as the Waste Management Phoenix Open in February 2015.

The fast-rising golfer kept improving on his form and two years later, won his first major championship by claiming the U.S. Open title at Erin Hills, Wisconsin. The rest, as they say, is history.

First thing first, Brooks Koepka is not married at the time of writing. We bring you facts about his dating history and current relationship status.

The golf player was first involved in a romantic affair with his first known girlfriend and American soccer player, Becky Edwards.

Theirs was an on and off long-distance relationship that didn’t stand the test of time owing to Becky’s international engagements in football.

Moving on, Koepka met actress and model, Jena Sims during his participation at the 2015 masters. They connected on a friendship level for months before being romantically engaged.

Meanwhile, neither of the lovebirds have son(s) or daughters(s) out of wedlock at the time of writing.

Brooks Koepka comes from a middle-class family background. We bring you facts about his family life.

Brooks’ dad, Bob Koepka is a one-time college baseball player who played the sport as a pitcher at West Virginia Wesleyan.

He progressed from playing baseball to learning golf and soon became a coach to his two sons during their career buildup in the sport.

The father of two shares a close bond with his sons who don’t miss taking out time to be with him as well as send their warm wishes on the occasion of the fathers day celebration.

Denise Jakows is Brooks’ mom. Unlike the rest of her household, Denise is not actively engaged in any sport but plays the role of a supportive observer.

She was diagnosed with cancer during Brook’s road to fame but survived to keep inspiring her children particularly Brooks who ascribes the pivotal upturn of his career to her.

Brooks has no sisters, but a younger brother called Chase Koepka.

Like Brooks, Chase shared in the family’s passion for baseball and thereafter trod the path of his older brother in learning golf.

He is currently a professional in the sport but has not achieved much success like Brooks whom he was paired with during the 2017 Zurich Classic in New Orleans.

Away from Brooks’ immediate family, he has a great uncle, Groat who was inducted into the college hall of fame for his excellence in baseball and basketball.

Meanwhile, there are no records of the Golf player’s paternal grandparents as well as his maternal grandfather and grandmother.

Neither has his aunts, cousins, nephew and nieces been identified in notable events of his early life till date.

What makes Brooks Koepka tick?. Sit back as we bring you makings of his personality to help you get a complete picture of him. To start with, Brooks’ persona is a blend of Zodiac traits.

He is trailblazing, unwavering, hardworking and gladly reveals details about his personal and private life. Brooks interests and hobbies include snowmobiling, canoeing, basketball, baseball and spending quality time with friends and family.

Brooks Koepka has an estimated net worth of $18 million at the time of writing.

The origin of his wealth majorly stems from his winnings in golf and endorsements while analysis of his spending patterns shows that he lives a luxurious lifestyle.

Assets that testify to such lifestyle are his multi-million dollar houses spread across Florida in Jupiter and Tequesta.

The houses have not just deluxe rooms and facilities befitting for a prominent golfer but garages that shelter Brooks cars including a Mercedes AMG G 63 SUV.

To wrap up our Brooks Koepka Childhood story and biography here are little-known facts that are hardly included in his bio.

Brooks considers golf to be a boring sport and distinguishes it as work, not a hobby.

The golf player who is without tattoos appreciates drinking but he is not given to smoking at the time of writing.

Regarding his religion, Brooks was born and raised as a Christian. However, he is yet to make comments on matters regarding faith.

FACT CHECK: Thanks for reading our Brooks Koepka Childhood Story plus untold biography facts. At childhood biography, we strive for accuracy and fairness while delivering you the Biography of Professional Golfers.