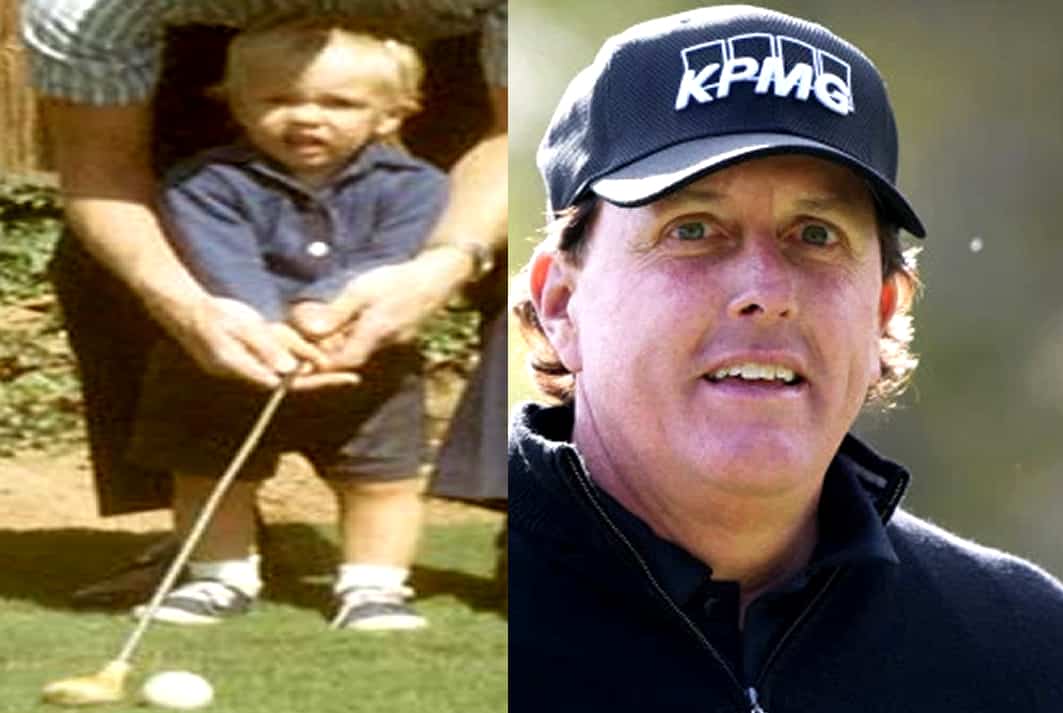 ChildhoodBiography presents the Full Story of an American Golfer best known by the nickname “Lefty“.

Our Phil Mickelson Childhood Story plus Untold Biography Facts brings you a complete account of notable events from his childhood.

The analysis of the American professional golfer involves his early life, life story before fame, family background and personal life. More so, other OFF and ON-Screen little-known facts about him.

Yes, everyone knows about his long walk to clinching a major title after turning pro.

However, only a few consider Phil Mickelson’s Biography, which is quite interesting. Now, without further ado, let’s begin.

For starters of his Life story, Phil Alfred Mickelson was born on the 16th day of June 1970 at San Diego in California, United States.

Mickelson was the second of three children born to his mother, Mary Mickelson, and to his father, Phil Mickelson Sr.

Regarding his family background, Phil is an American national of white ethnicity with Portuguese, Italian/Sicilian and Finland-Swedish roots.

Growing up in San Diego alongside his older sister Tina and younger brother Tim, Young Mickelson was like his counterpart, Rory McIlroy, acquainted with golf as soon as he started walking. 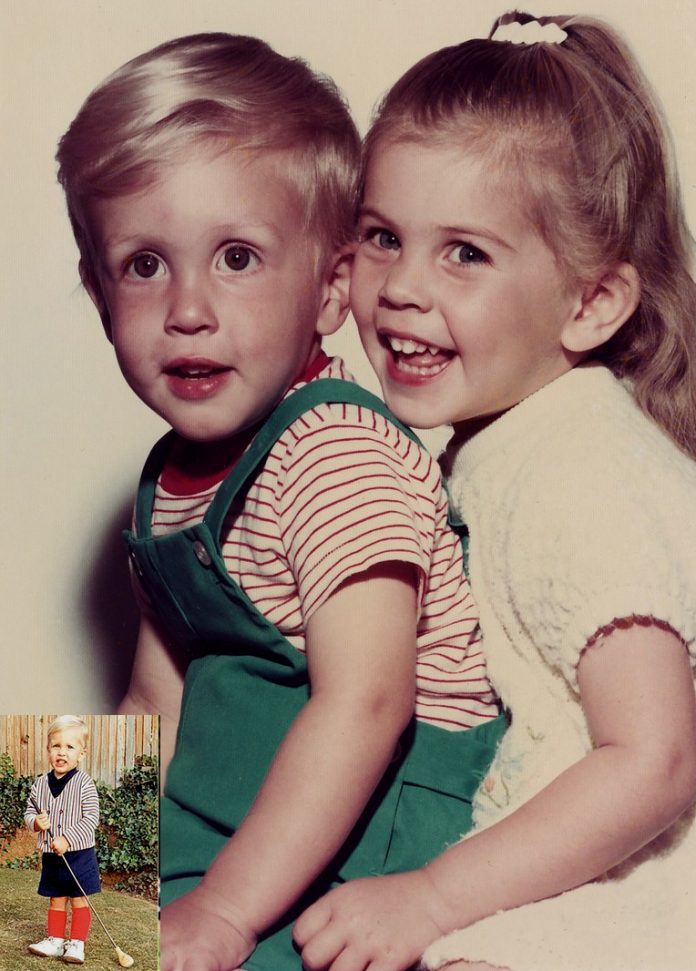 Mentored by his father with whom he practised golf at their home’s backyard, a 3-year-old Mickelson developed an intense passion for the sport, preferring to swing with his left hand against his father’s wish.

“Mickelson would always swing with his left hand despite efforts made to change it. Notwithstanding, his swing was unlike anyone’s I’ve ever seen for someone that young.

We weren’t going to fool around with changing his swing. Instead, we made him a light left-handed driver club.”

His parents also recalled that the stubborn kid once attempted to leave home, telling whoever cared to listen that he heading to a golf course.

It was only a matter of years later that the golf prodigy could comfortably ’dream and achieve’, beginning from his high school days.

Notable among Mickelson’s academic background was his education at San Diego High school before proceeding to Cathedral Catholic High school for college prep.

It was at high school that Mickelson began his amateur golf career as a teenager winning no fewer than 34 San Diego Junior Golf Association Titles.

His early successes in the sport can be much attributed to his father’s career as a pilot, an activity that afforded him flying tickets to destinations of his junior tournaments while his mother, on the other hand, took up an extra job to cater for other costs.

As a result, there was no end in sight to what Mickelson could achieve including winning three consecutive American Junior Golf Association player of the year award and a full scholarship to Arizona State University where he studied psychology. 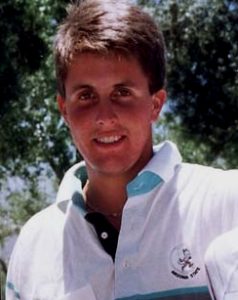 Studying at Arizona State University saw Mickelson court the attention of golf-pros, fans and sportswriters for reasons not far from his increasing college golf wins including three NCAA championships. 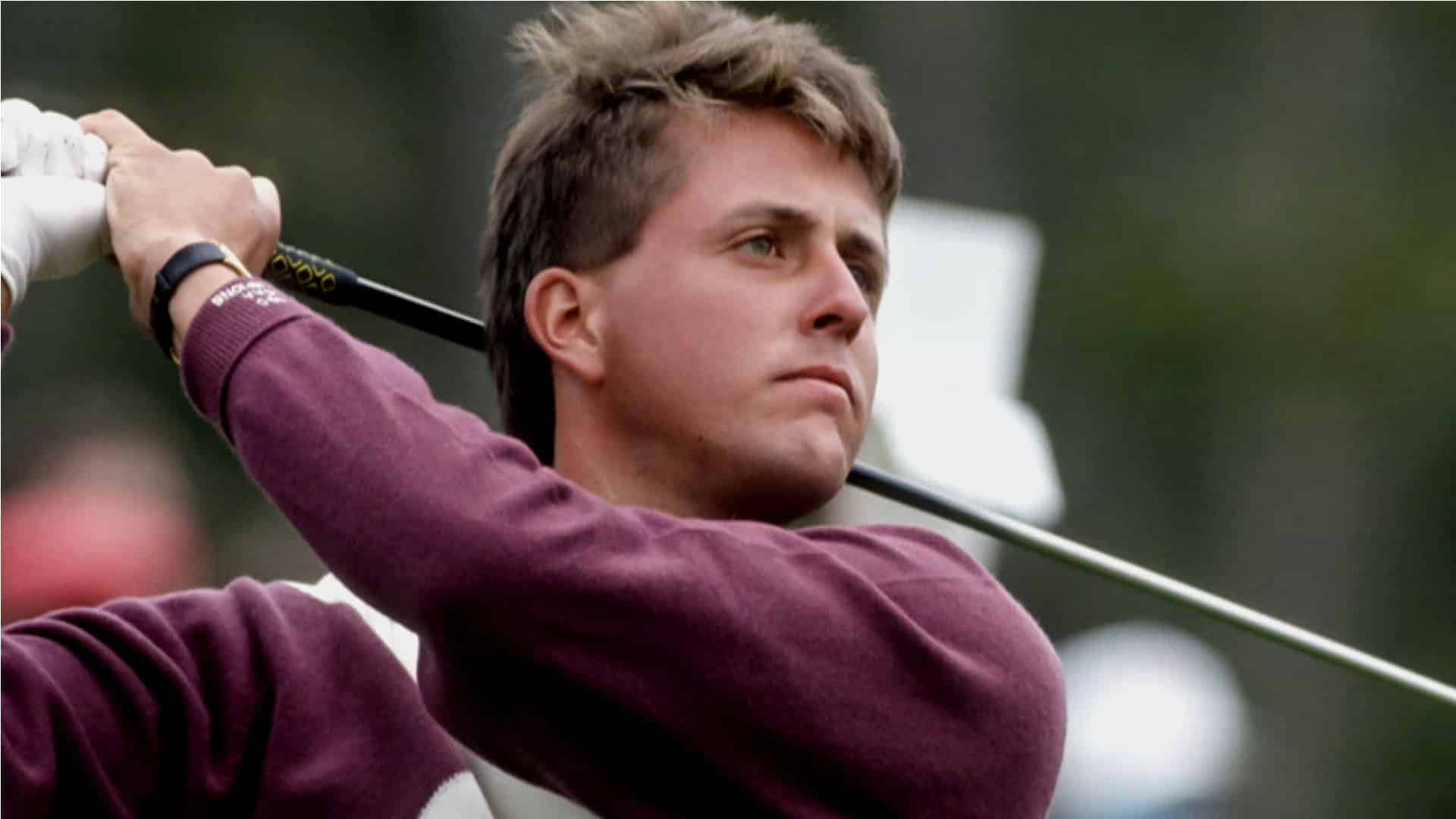 The observers couldn’t help but wonder why the amazing left-handed amateur champion had not ditched college to turn professional. Mickelson would later explain that:

“School is a commitment I made. I kind of set a four–year plan. I felt that in four years [while in college] I could advance my game and be strong enough to compete on the PGA [Professional Golf Association] Tour”.

1992 was the year which Mickelson graduated from university and immediately turned pro. The much-anticipated development was welcomed by many, including a reporter who enthusiastically announced that:

“Not since Jack Nicklaus has a young amateur excited the world of golf like Mickelson.”

Thus began the decade+-long walk to a ‘Major breakthrough’ by Mickelson who won many PGA tour event throughout the 1990s but found it hard to win a major. 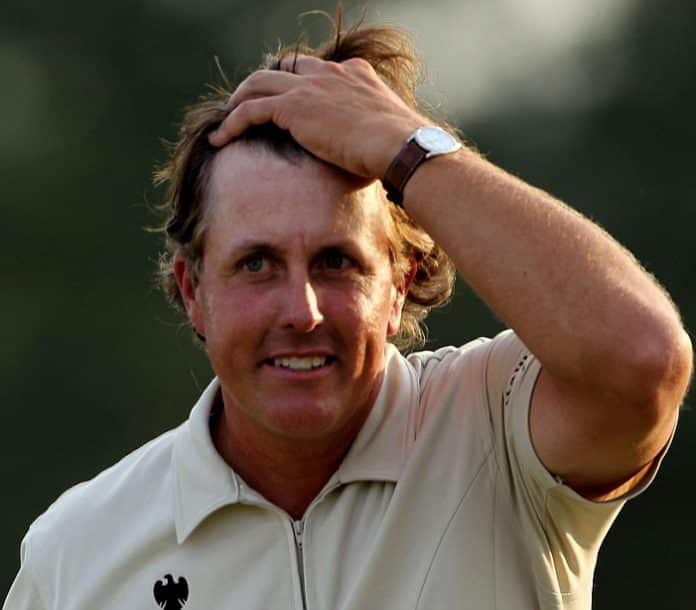 Mickelson, who was labelled “best player never to win a major,” at the time, finally had his breakthrough in 2004 when he won the 68th ‘Masters Tournament’ at the ‘Augusta National Golf Club’ in Georgia.

So intense was the triumph feeling that Mickelson winning moment was ranked No. 9 in TV Guide’s list of the “25 Most Awesome Sports Moments (of the last 15 years).“ 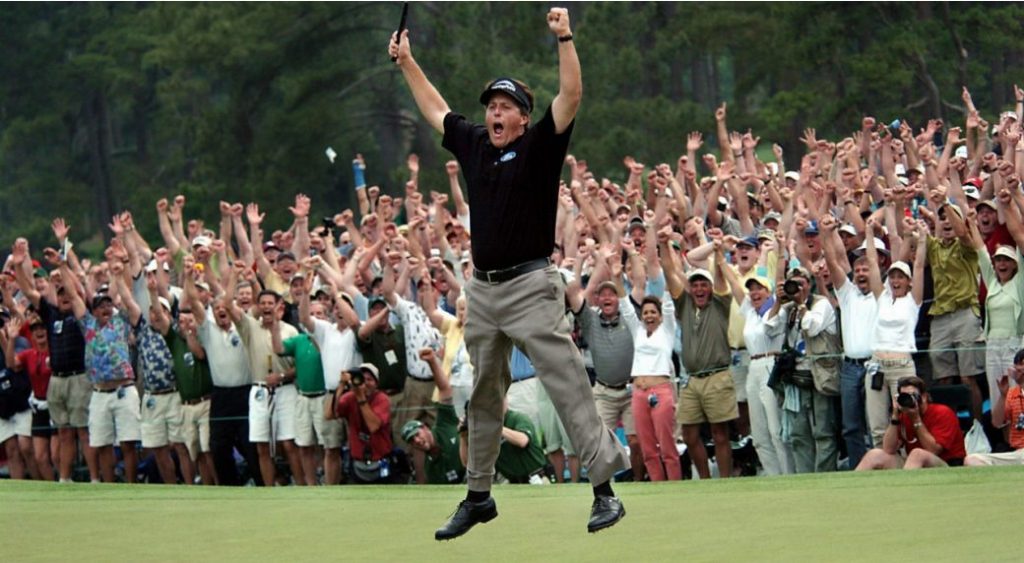 Mickelson has been long married to his wife known as Amy McBride. The couple met at Arizona State University, where they started out as college sweethearts.

Amy was at the time indirectly involved in sports as she served as a cheerleader with the Phoenix Suns for the NBA team.

Upon dating for four years, Mickelson walked down the aisle with Amy on the 16th of November 1996. However, Photos of their wedding were not made public. 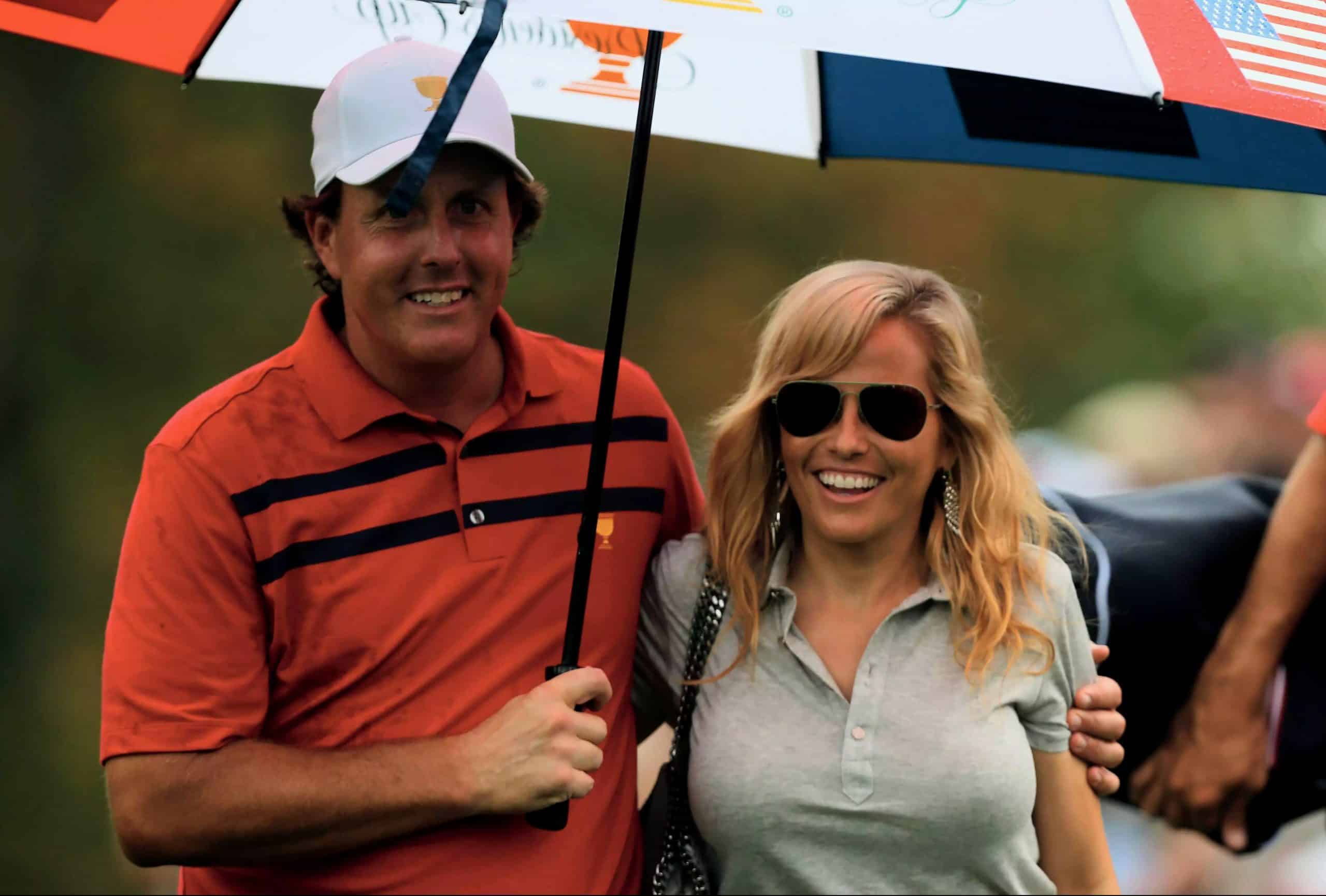 Their marriage is blessed with two daughters and one son. They include Amanda born in 1999, Sophia born in 2001, and Evan born in 2003. 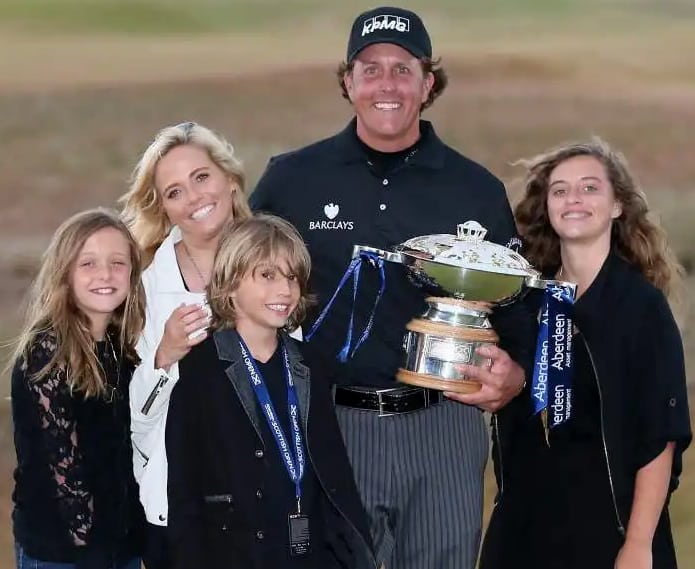 Together, the family have been through ups and down including Amy being diagnosed with Breast cancer in 2009 but survived after months of intense battle.

Mickelson suffered psoriatic arthritis in 2009 and underwent two surgeries for hernia in 2016.

Mickelson was born into a sports-loving family of five. We bring you factual details about his family.

Phil Mickelson sr is the father of the golf genius. Speak of his career, Mickelson sr started out as a Navy Fighter Jet pilot before he switched to flying commercial airlines.

He is a good mentor who not only taught his son how to play golf but how to fly a plane too. 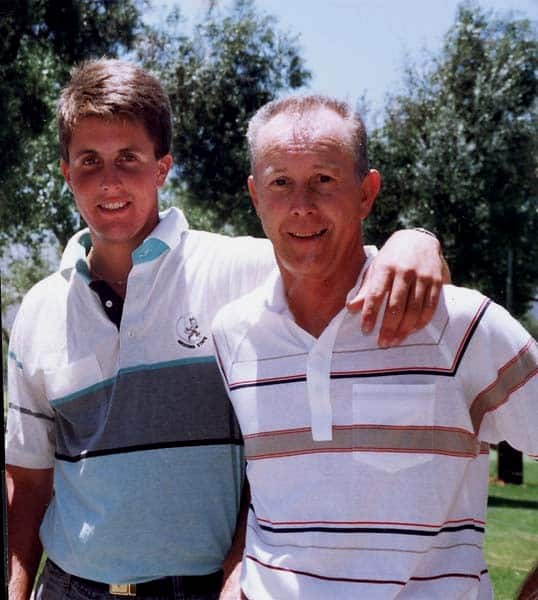 Mary Mickelson is Phil’s mother. She has been married to Phil Mickelson Sr. since the 19th of September 1964.

It is worthwhile to note that Mary’s father (Mickelson’s maternal grandfather) Al Santos was a fisherman who worked as a caddy and played golf in his 60’s. 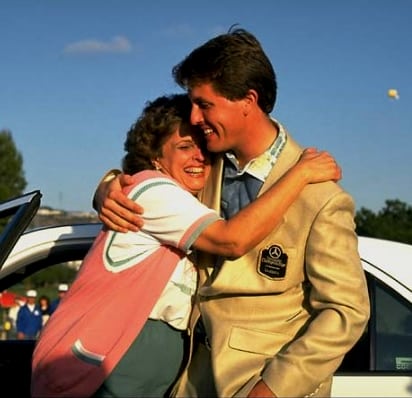 Tina was like Mickelson, introduced to golf when she could walk, and grew up loving the game.

Though not directly involved in the game as a player, Tina is an “A” class PGA Member as well as a teaching professional who helps others improve their golf games, among other promoting endeavours. 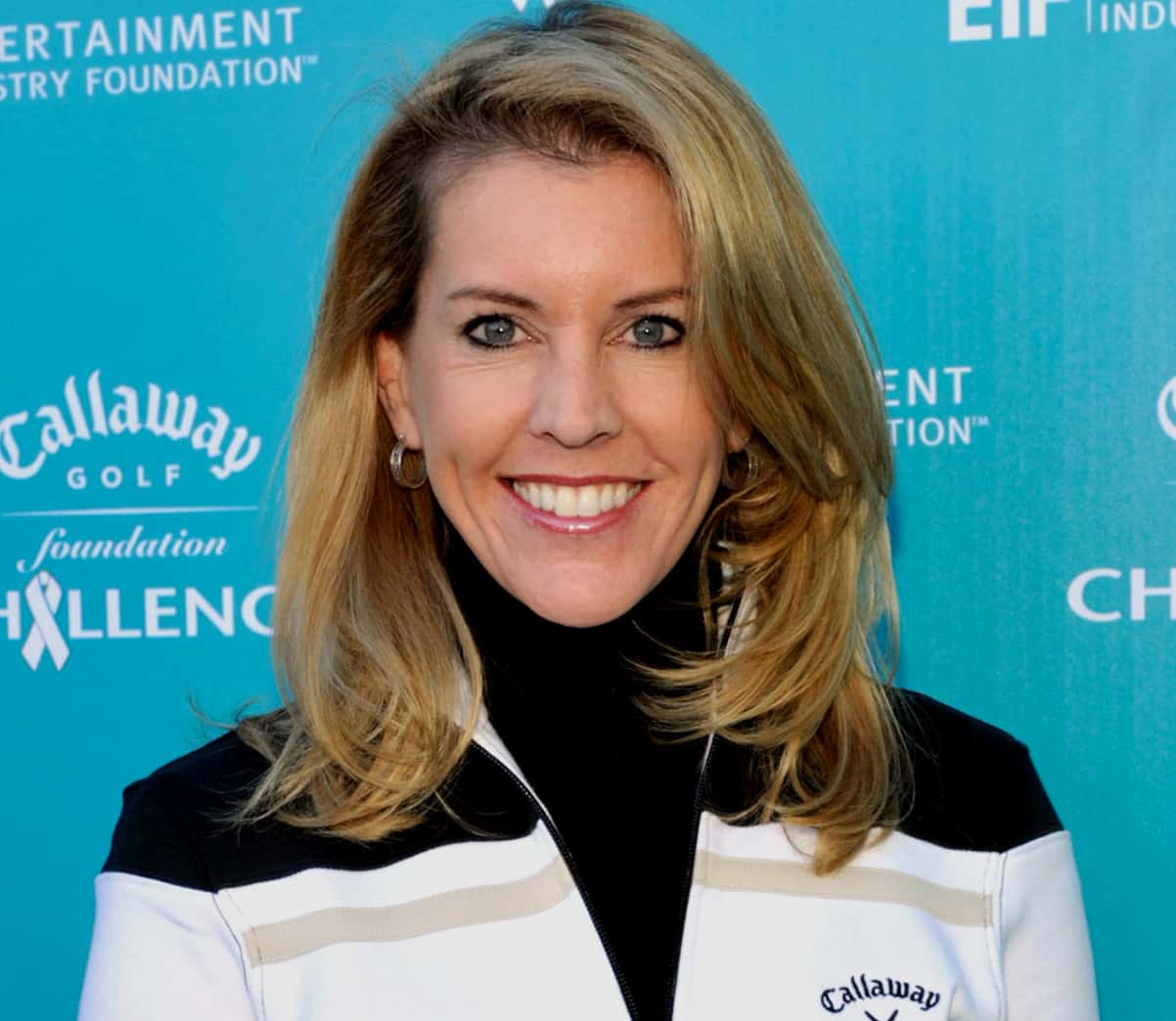 Tim, on the other hand, is at the time of this post, a caddy for his elder brother Mickelson. Before taking up the role, Tim was an agent to an upcoming talent on PGA tour, Jon Rahm as well as an amateur golfer. 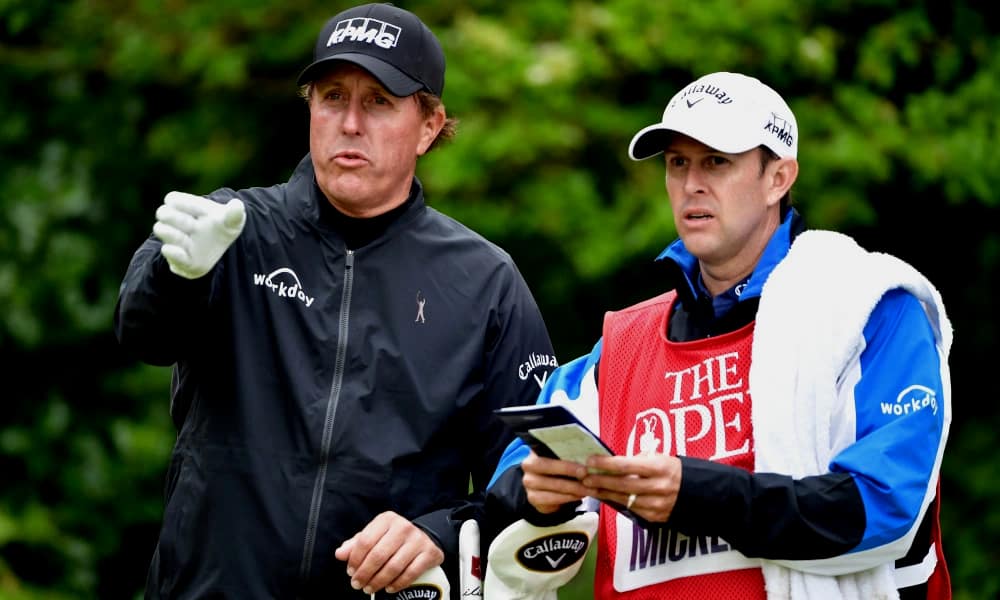 Phil Mickelson makes not less than $50 million dollars annually from appearances and endorsement by sponsors. 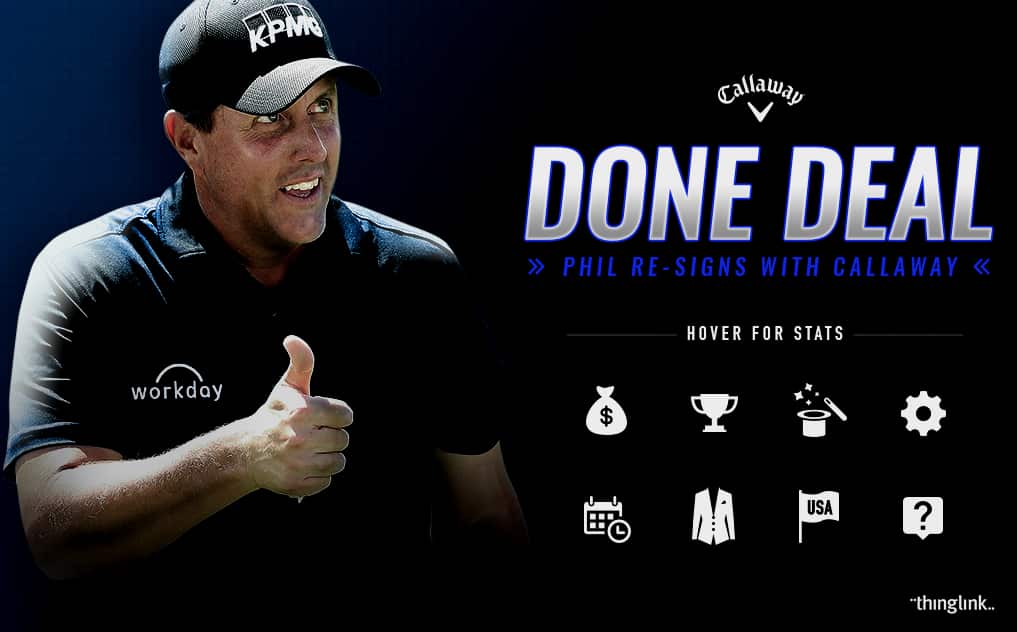 Moving on to his investments, Mickelson has golf properties that consist of three private and three public courses. Each course is situated in scenic environments at different locations and offers a unique golf experience.

Personal Life away from Golf:

Mickelson is a talented golf player who despite being popular is still very down to earth and does lengthy post-round autograph sessions. 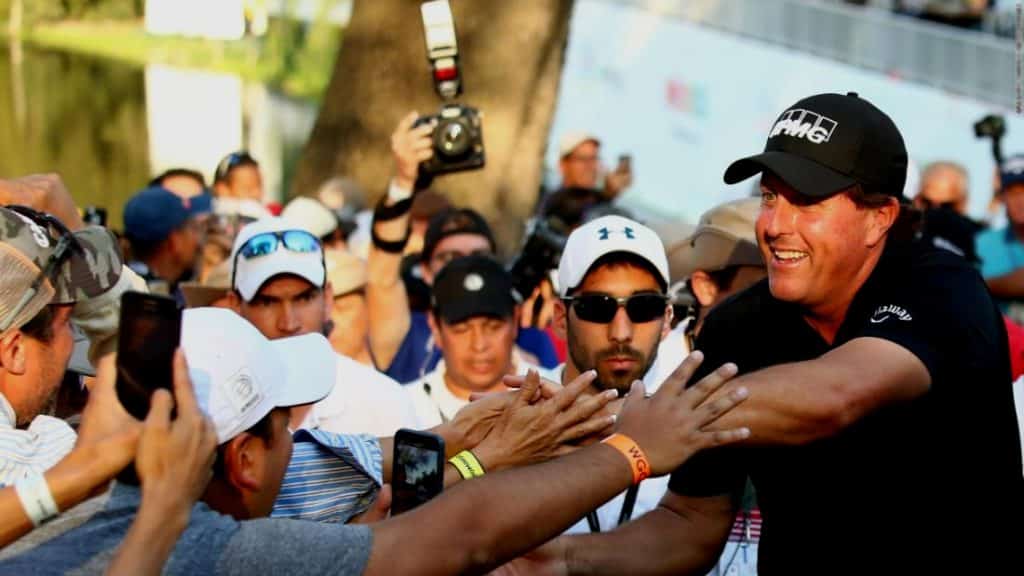 Though winnings are desirable, Mickelson makes it a point to entertain his fans. He promotes the fact that there’s more to a game than just winning. According to him:

“A golfer is an entertainer, much like an actor. People pay money to go out and watch you play, and I don’t think they pay just to watch you hit a drive down the middle, hit a shot on the green, and two-putt.”

For Mickelson, family comes first. This is evident in the manner in which he recorded poor performance in the year 2003. When his wife almost died during childbirth. While his son Evans, survived 7 minutes without a breath in his mother’s womb.

“Phil was so shaken by the trauma that he sleepwalked through the 2003 season, his worst in 12 years on the PGA Tour.”

Owing to his sensitivity, Mickelson is compassionate and known for contributing large parts of his earnings to charity. Also, education, and scientific purposes.

He is also known for contributing massively for the upkeep of children. Especially those of Military personnel that lost their lives during training and at operations. 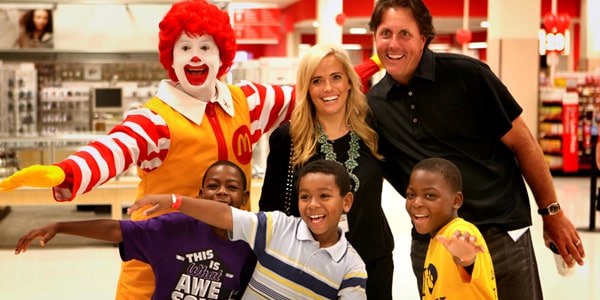 Asides from playing golf, Phil Mickelson enjoys flying planes. Thanks to his father’s all-around mentoring, Mickelson is a licensed pilot and has his own plane. 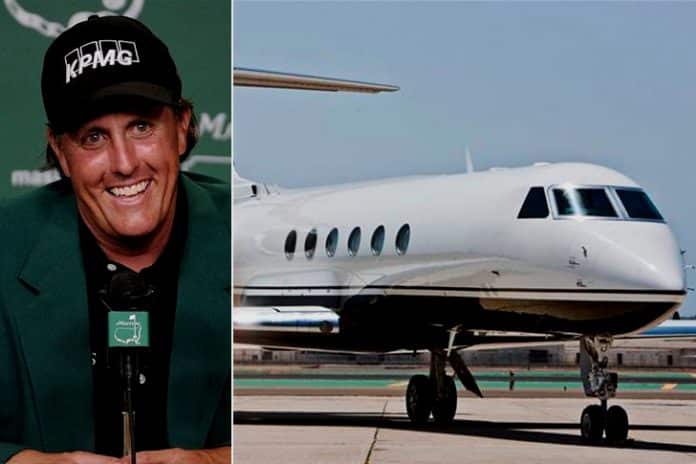 FACT CHECK: Thanks for reading our Phil Mickelson Childhood Story plus untold biography facts. At childhood biography, we strive for accuracy and fairness. If you see something that doesn’t look right in this article, please place your comment or contact us!