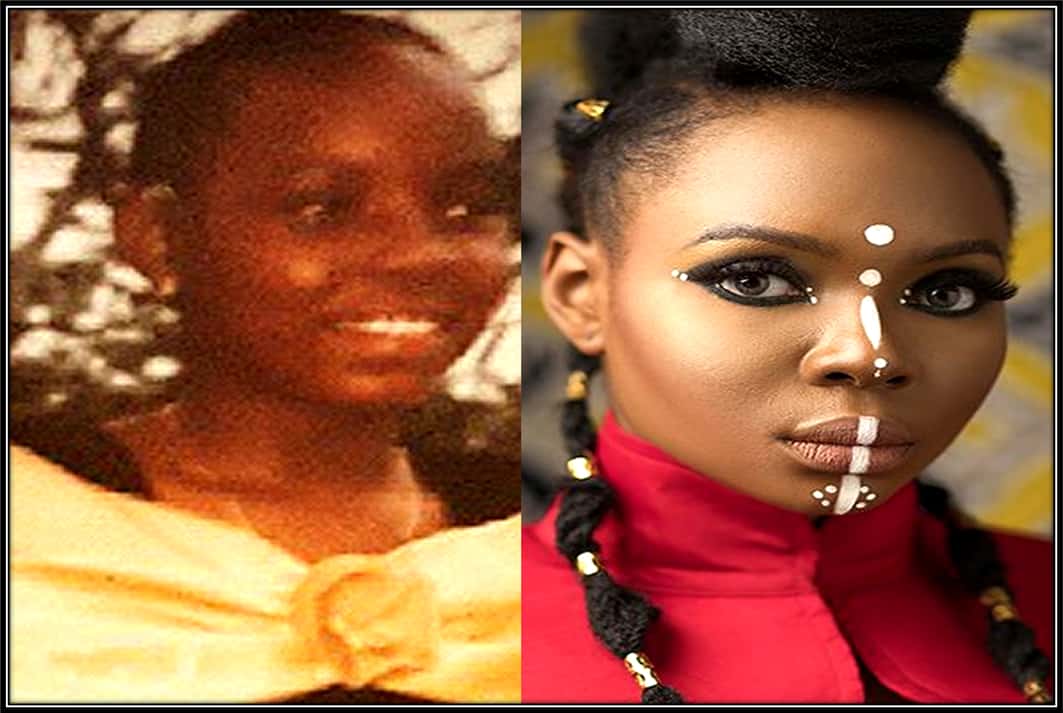 Childhood biography brings a full analysis of her Life Story, starting from her Early Years to when she became famous.

However, only a few consider reading Yemi Alade’s biography, which is quite impressive. Now, without further ado, let’s begin.

For Biography starters, Yemi Eberechi Alade was born on the 13th day of March 1989 to her mother, Helen Uzoma, and father, James Alade, in Abia State, Nigeria. Yemi Alade’s parents had her as the fifth of seven children born of their union.

The Life Story of Yemi Alade depicts that she has always been interested in good music since her childhood days. Truth is, as a little girl, she often made efforts to compose her music, whether in good times or in bad times.

Often, people have usually wondered about her true family roots. The reason behind their curiosity is that Yemi Alade bears two names that originate from two different ethnic groups in Nigeria.

Owing to their Yemi Alade’s Family origin, she was given two names relating to the ethnicity of her dad and mum.

Furthermore, her name Yemi (from Yoruba) and Eberechi (from Igbo) is the reason why she is usually called the Yoruba-Igbo girl. However, most of her fans have only known about her Yoruba heritage.

Our veteran singer was raised in Lagos state alongside her siblings. Growing up with her family, Yemi was always as cheerful as other kids.

Therefore, she makes out time to play different popular games with other kids in her society.

Life was pretty easy for Yemi Alade whose only job was to carry out some house chores after school. Notwithstanding, she took particular interest in listening to the music of the 80s and 90s.

Hence, her starting point for a successful music career was based on an unconscious drive for melodies in music.

Being born into a family that values education, Yemi Alade’s parents enrolled her to study at St. Saviour British Primary School.

She studied hard and graduated from primary school in due time. Immediately, she furthered her secondary academic pursuit at Victory Grammer School.

During her secondary school days, the talented singer was more concerned about her academic performance than anything else. Although she loved music, she was focused on excelling in her educational endeavours.

By the time Yemi was sixteen years old, she joined an all-girl group, Noty Spices. After a short while, she debuted her first music with the group. However, the music did not gain any prominence as she had earlier expected.

In no distant time, Yemi chooses a different career path and sought admission to the University.

She gained admission to study Geography at the University of Lagos State, thus she began studying. Like Kizz Daniel, her efforts to study were not laid to waste as she soon graduated from the University.

Although she had ventured into a different career line, Yemi didn’t give up on music. Soon, she participated in and won the Peak Talent Show hosted in 2009. Ordinarily, she had won the competition as a result of her musical talent.

However, she remarked on how the training she received during the competition has shaped her.

Consequently, Yemi went on to showcase her talent in many other shows and events. This time around, she was categorically sure of what she wanted to do with her life. Furthermore, she started to practice consistently in other to make up for the lost time.

After a few years of stage performance, Yemi Alade signed a contract deal with the Effyzzie Music Group record label in 2012.

With the group, she released her single titled “Ghen Ghen Love”. Subsequently, she went on to produce many more mind exploding kinds of music.

Fast forward to the time of writing Yemi Alade’s biography; the Yoruba-Igbo girl has risen to prominence in the Nigerian entertainment world. In 2019, she released her fourth studio album titled Woman of the steel.

Furthermore, just like the famous Nigerian singers; Davido, Wizkid, and Burna Boy, Yemi Alade has received numerous national and international awards. Of course, she won. The rest, as they say, is history.

As of May 2020, Yemi Alade’s relationship status is single. Being a successful singer, Yemi ensured she maintain a balance in her love life.

Below are interesting facts about Yemi Alade’s relationship life that you can’t afford to miss. Read on;

Who is Yemi Alade’s Boyfriend?

Do you know?… Yemi Alade has been affiliated with different Nigerian celebrities in her relationship life. Since her rise to fame, the female veteran singer admitted that she had a crush on the Nigerian rapper, Phyno.

Furthermore, she also mentioned that she had a fling for the Enugu music entertainer, Flavour N’abania. Another dating rumour points to Mikel Obi.

However, Yemi Alade has dated only one know celebrity since her rise to fame. After the production of her music video, “Johnny”, Yemi was alleged to have secretly dated the Nigerian actor, Alex Ekubo.

The assertion may have popped up as a result of Alex playing the role of “Johnny the over boy” in her video.

Notwithstanding, when she was asked about her relationship with Alex Ekubo, she replied that he was a cool guy.

Also, she stated that because of how close he is to her, many people think they are dating. In summary, Alex Ekubo is not Yemi Alade’s boyfriend.

The prolific Nigerian singer is single at the time of writing her life’s story. She stated that she would like to marry someone she loves and cherish.

Notwithstanding, many of her fans are waiting for the day she would get married and bear beautiful children.

One of the most sought after information of the Nigerian energetic singer is the information about her entire family. In this section, we’ll bring you comprehensive details on Yemi Alade’s parents and the rest of her household.

Helen Uzoma is Yemi Alade’s mom. She hails from Abia state in the eastern part of Nigeria. Helen is a definition of a successful mother.

Her profound confidence to stand and identify with her daughter’s success is second to none. In short, Yemi’s mother is her number one fan since her rise to fame.

James Alade is Yemi Alade’s dad. He was a former police commissioner who ensured he took care of the needs of his children.

He hails from Ondo state in the eastern part of Nigeria. Unfortunately, grief stroke Yemi Alade’s family as James Alade lost his life to the cold hands of death.

The Nigerian pop singer has four brothers and two sisters. Her most notable siblings are Jessica Ejiofor and her younger brother, Durojaiye Alade.

Durojaiye graduated with a B.Sc in Psychology. Hence, he was endorsed as assistant police superintendent (ASP) of the Nigerian Police Force.

Moving on to Yemi Alade’s ancestry, there has been no valid information about her paternal grandmother and grandfather. There has also been no news about her maternal grandparents. Furthermore, no detail is available about her uncles and aunts as well as her nephews and nieces.

Our famous music celebrity leads a private life. To begin with her horoscope, she is a blend of the Virgo zodiac traits.

She is simply the ultimate combination of beauty and brains. Her precise taste in fashion leaves most of her audience drenched in the euphoria of surprise.

Besides, the veteran pop singer has in no case, disclosed her hobbies to her fans. However, it is categorically clear that she has recently developed an interest in fashion and beautifying routines.

After releasing several successful albums, Yemi Alade had made enormous financial proceedings. Today, she has risen to the class of millionaires.

Her net worth is estimated to be a whopping sum of $4.2 million. Consequently, Yemi now lives a luxurious lifestyle.

Yemi Alade has purchased many cars as well as a luxurious house since her rise to fame. In 2019, she gifted herself a luxurious Toyota Prado SUV worth #48 million.

Furthermore, Yemi owns an expensive G-Wagon which she had flaunted on social media. Take a look at her cars below.

To wrap up our Yemi Alade story, here are some lesser-known facts that would help you get a full grasp of her biography.

She is the King of Queen:

The title of Yemi Alade’s album “King of Queen” has raised a lot of questions from her fans. She was asked why she came up with such a title for the record. Here is her reply to the question;

“I have been calling myself King Yemi Alade for reasons beyond having blue blood. Moreover, it is a clarion call to all female artists to know that they have to step out of where they are and compete as a guy would”.

Yemi Alade’s role model in the music industry is Waje and Omawunmi. Their music style left a lasting impression on her. However, she soon found herself swimming in the pool of fame after working harder to surpass them.

She owns a Jewelry Line:

Another interesting fact about Yemi Alade is the ownership of her Jewelry Line. As her interest in Jewelry grew, she decided to create “YemiAlade Collection” as a personal project.

Furthermore, she also stated that her personality and career life inspired the collection.

Below is the wiki knowledgebase of the Nigerian singer. The table will help you find information about her concisely and efficiently. Find below;

Thanks for reading the Biography of Yemi Alade. Without a doubt, she is among the top 10 Nigerian female artists of the decade- 2010-2019.

While putting up her Life Story, our editors were on the watch for accuracy and fairness. Kindly tell us what you think about our write-up on the Rich Nigerian Female Musician.