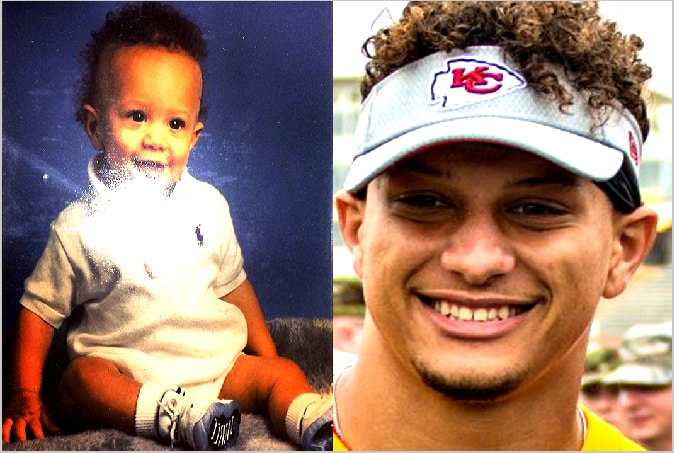 Starting off, he bears the nickname “Pattycakes“.

Our Biography of Patrick Mahomes tells you his Childhood Story, Early Life, Family Facts, Parents and about Brittany Matthews – his lover.

More so, the NFL star’s Personal Life, Lifestyle and other notable events right from when he was a child to when he became popular.

Yes, everyone knows he is one of the best quarterbacks in the NFL. However, only a few consider Patrick Mahomes’ Biography which is quite interesting. Now, without further ado, let’s begin.

To begin with, Patrick Lavon Mahomes II was on the 17th day of September 1995 at Tyler in Texas, U.S.A. He was the first of three children born to his mother Randi Martin (a former baseball player) and to his father Pat Mahomes.

Did you know that Patrick is an American national of mixed ethnicity with Afro-American roots?… Patrick enjoyed happy early years growing up at Whitehouse in Texas alongside his younger siblings – Jackson (brother) and Mia (Sister).

Growing up at Whitehouse, Patrick was an athletic kid who was very much invested in sports. Contrary to widespread beliefs, Patrick’s first childhood sport was not football but baseball!

It was Patrick’s dad – Pat who introduced him to the sport before he could barely learn to walk. The caring dad went on to mentor young Patrick in baseball over the ensuing years.

Thanks to his natural talent for the sport, Patrick Mahomes’ parents held high hopes that he would make a career out of baseball. This belief began when little Pat was a little baby. 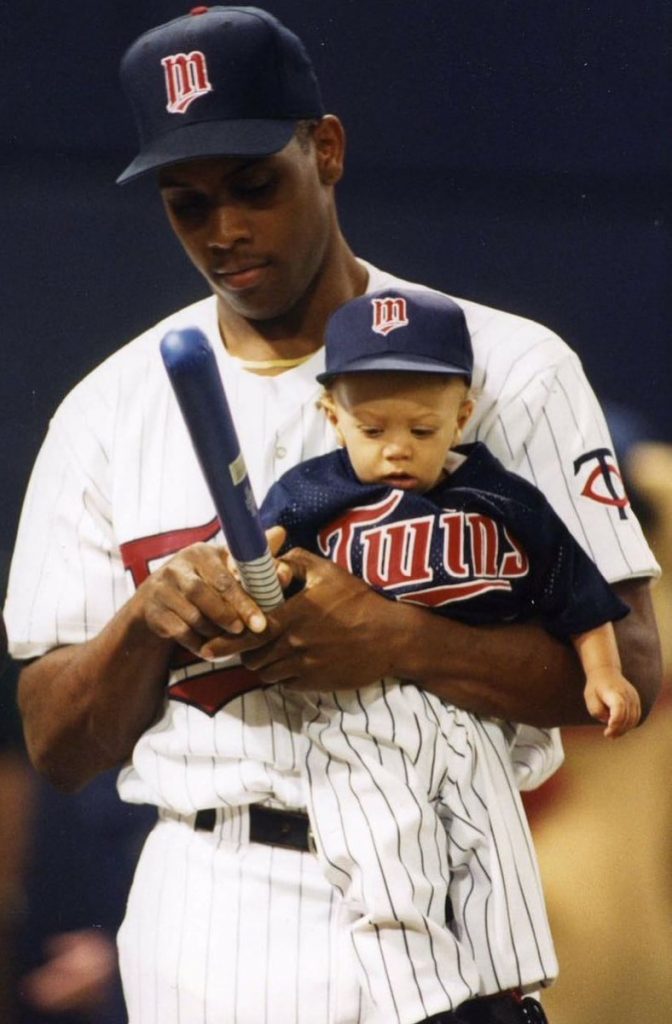 With respect to their ancestry, Patrick Mahomes’ parents indeed have a thing for diversity.

Did you know?… His father is an African American while his mom is a Caucasian lady of English, German, distant Scottish, and Dutch family origins. 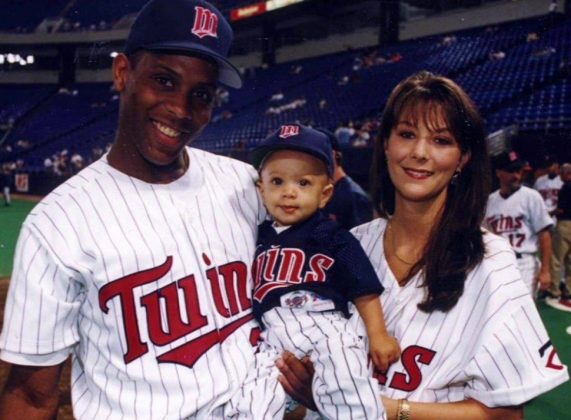 Thus, it is not surprising that Patrick Mahome’s parents gave him ‘green lights’ to explore his athleticism in playing football and basketball.

Thanks to them, Patrick had an upper-class family background and never lacked the resources required to help him achieve his childhood dreams.

Patrick attended Whitehouse High School in Whitehouse, Texas. While at Whitehouse High, Patrick blended his conventional education with being a three-sport (baseball, basketball, and football) athlete.

At the peak of his high school education, Patrick was was exceptional in baseball and football. In fact, he was on the radar of many high-level Major League Baseball (MLB) teams.

He was even picked by the ‘Detroit Tigers’ during the 2014 MLB draft while Texas Tech college came offering him a scholarship to play football. 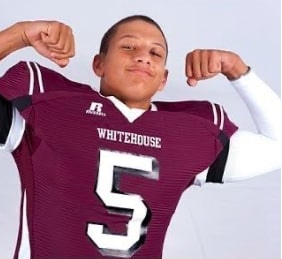 Although the football and baseball prodigy had interests in playing both sports, he chooses to accept Texas Tech’s scholarship to play college football and fared excellently well in the sport.

Whenever Patrick was not on the football pitch during the sports period, he could be found playing baseball as a relief pitcher for his college baseball team know as ‘The Texas Tech Red Raiders.’ 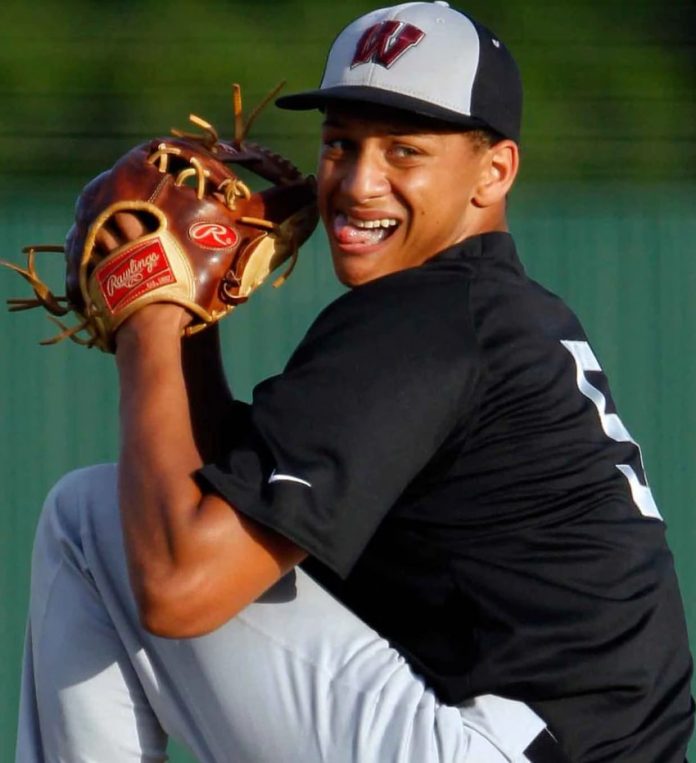 By the time Patrick was done with his sophomore year, he made the decision of quitting baseball. Although Patrick’s dad would have preferred to have him focus on baseball, he had no choice but to support his son’s decision. 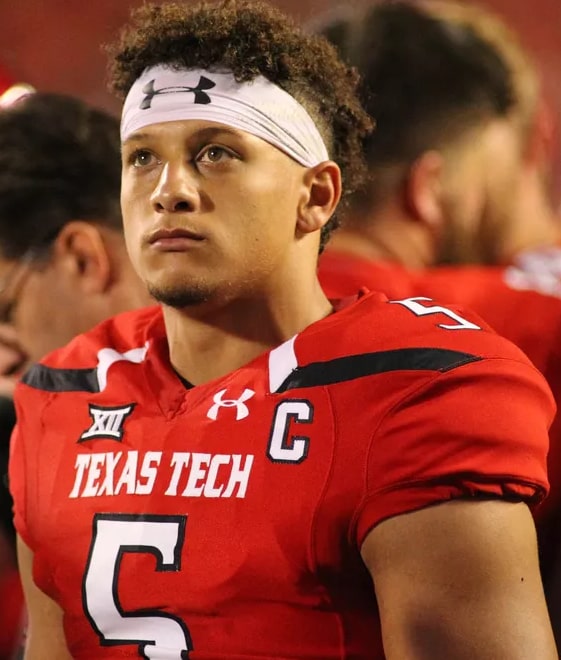 Backed with the support of his parent, Patrick went on to start the 2016/2017 season entirely focused on football.

At the end of the season, he set multiple records including winning the ‘Sammy Baugh Trophy’ and being in the ‘Academic All-American 2nd Team.’

Barely a year later, Patrick entered the 2017 ‘NFL Draft’ as one of the most sought-after players. He was selected by ‘Kansas City Chiefs’ in the first round of the draft and spent his rookie season as the backup to Alex Smith.

When Alex Smith was traded to Washington Redskins the following season (2018/2019), Patrick was named the starter quarterback.

With the record, Patrick became the only quarterback in history to throw for over 5,000 yards in both college and the NFL for a season! 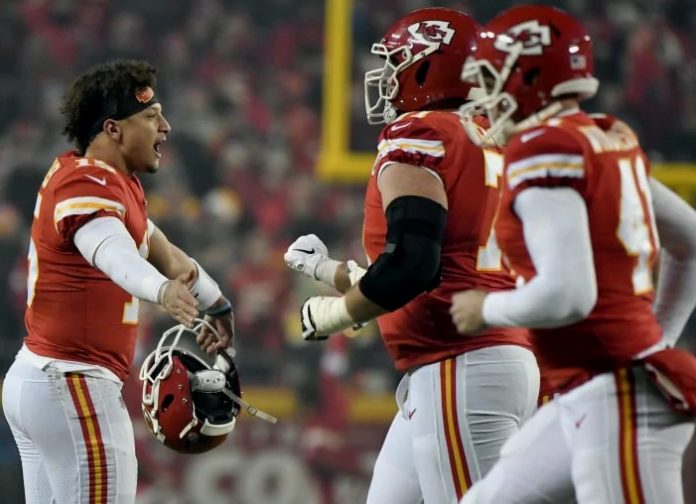 Who is Patrick Mahomes Girlfriend?

Moving on to Patrick Mahome’s love life, he has been in a very long-term relationship with his girlfriend Brittany Matthews. The lovebirds both grew up at Whitehouse in Texas.

They met in high school and began dating at a time when Patrick was a sophomore and Brittany was a junior.

Brittany and Patrick have been together ever since, a development that explains why the football genius is not known to have had any other girlfriends. 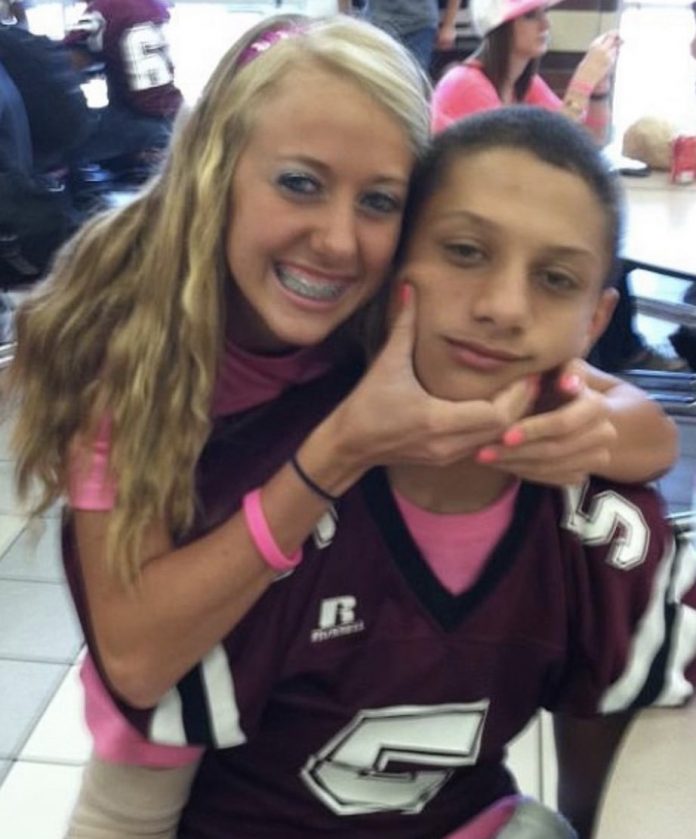 It is worthwhile to note that Brittany also has an interest in sports. She used to be a college soccer player at the nearby University of Texas campus in Tyler and played professional football for UMF Afturelding/Fram in Iceland.

She is at the time of writing, a certified personal trainer who sells workout programs. Patrick and Brittany are not in a hurry to become husband and wife.

Neither do they have son(s) and daughter(s) outside wedlock. However, they do have two cute dogs named steel and silver.

Family is not just important to Patrick Mahomes. It is everything to the quarterback. In this section,  we’ll bring you more facts about Patrick Mahome’s Family members starting with his parents.

Pat Mahomes is the supportive dad of the quarterback. He was a professional baseball who played in the MLB as a pitcher for over 10 decades. As such, Patrick grew up watching his African-American dad play the sport.

Yes, Pat had high hopes that his son would follow his footstep by becoming a professional baseball player. However, he was left with no choice but to support his decision to become a football player. Pat is proud of what his son has become and continues to support him. 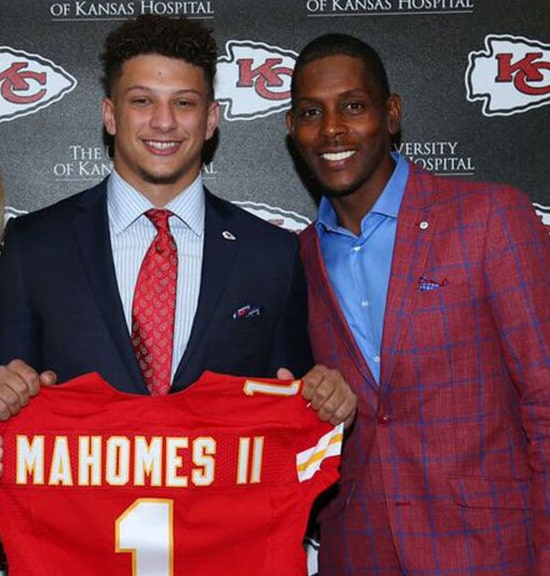 Randi Martin is the quarter back’s mom. The Caucasian mother of three got divorced from Patrick’s dad before the quarterback could become a teenager.

Nonetheless, she remained close to her children and worked with her husband to ensure that Patrick received a college education because neither she nor Pat went to college. Randi is Patrick’s biggest cheerleader who ensures that she never misses any of his games. 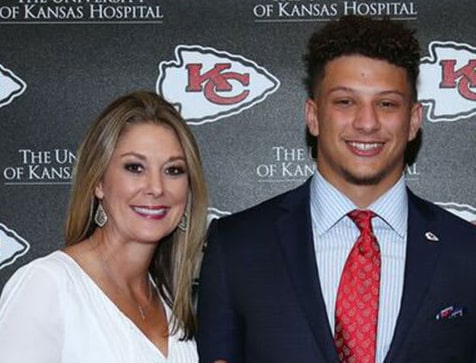 The quarterback has two beautiful siblings. They include his younger brother Jackson as well as his younger sister Mia. Jackson is the tallest of the family. He played basketball in high school and has prospects for becoming a professional athlete.

On her part, not much is know about Patrick’s sister Mia who is pretty much underaged at the time of writing this biography. 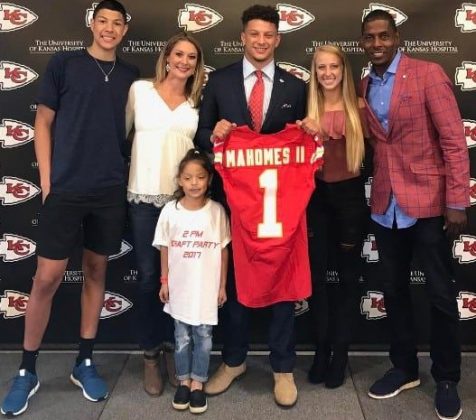 On the flip side, Patrick’s maternal grandfather and grandmother were Larry Randy Martin and Deborah Pearl Bates respectively.

We know little about the quarterback’s uncles, aunts, and cousins while he has no niece or nephews at the time of writing this biography.

Patrick Mahomes possesses a likable personality that has makings of Virgo Zodiac sign traits. He is unique, funny, generous, adept, adventurous, idealistic, and open to revealing facts about his private and personal life.

The quarterback’s interests and hobbies include traveling, Keeping up with baseball and basketball games, playing golf, listening to music, and spending a good time with his family and friends. 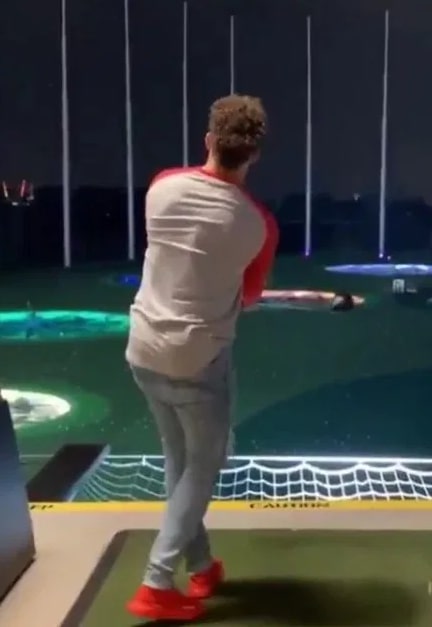 Regarding how Patrick Mahomes makes and spends his money, he has an estimated net worth of $12M at the time of writing this Bio.

The bulk of the quarterback’s wealth has sources established in the salaries and wages that he receives for playing football while endorsement contributes a significant chunk to his rising wealth.

As such, the quarterback affords to live a luxurious lifestyle that fans envy him for. Evidence of Patrick Mahome’s good living includes his ability to drive and maintain super expensive cars.

What more? he lives with his girlfriend in a $1.925 house in Kansas City’s Mission Hills neighborhood. 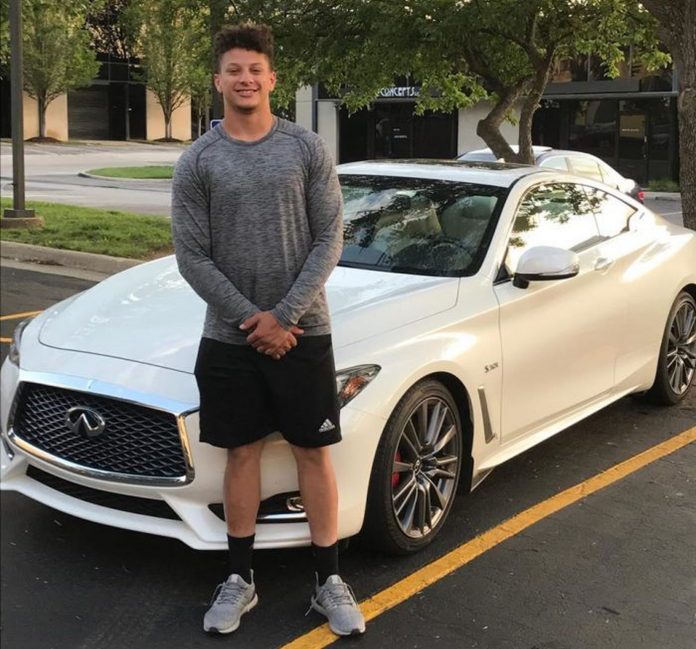 To wrap up our Patrick Mahomes childhood story and biography here are little-known or untold facts about the quarterback.

Patrick Mahomes drinks responsibly and does not smoke at the time of writing. With such a healthy habit, the quarterback joins the league of football players who have not lost sight of the need to live and stay healthy.

Patrick Mahomes’ parents raised him according to the Christian religious faith. The quarterback’s mother revealed that he found his faith in middle school.

While at the unnamed middle school Patrick reportedly joined a youth group that helped nurture his faith. Do you know that the quarterback prays before his games? 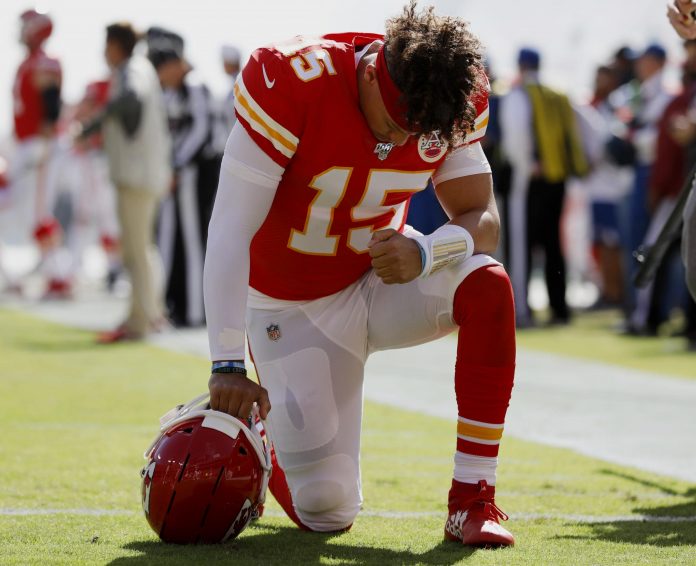 Patrick Mahomes has no tattoo at the time of writing but fans do have tattoos of him. However, there is no ruling out the fact he would soon get a body art to complement his height of 6 feet 3 inches.

At ChildhoodBiography, we strive for accuracy and fairness in our quest to deliver you the Biography of NFL Players.

Kindly stay tuned for more related articles in our NFL Players category. You may find some interest in the childhood story of TJ Watt, Davante Adams, Odell Beckham Jr and Josh Allen.