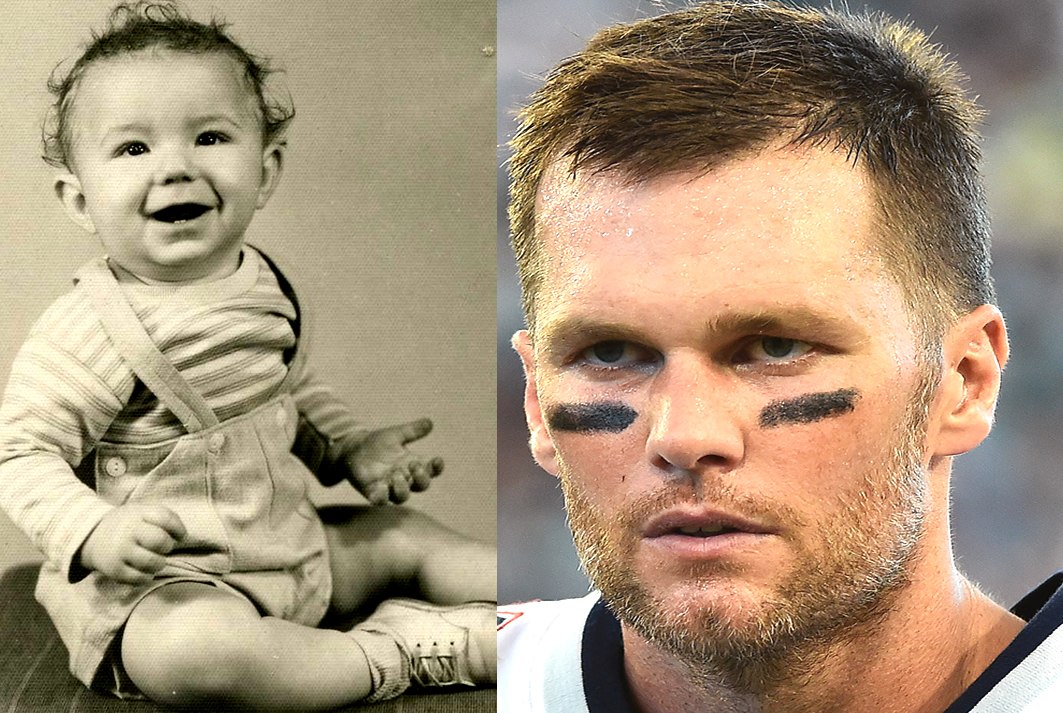 Our Tom Brady Childhood Story plus Untold Biography Facts brings you a full account of notable events from his childhood time to date.

The analysis of the American football quarterback involves his early life, life story before fame, family background and personal life. More so, other OFF and ON-Screen little-known facts about him.

Yes, everyone knows he is one of the all-time superstars in the history of American football.

However, only a few consider Tom Brady’s biography which is quite interesting. Now, without further ado, let’s begin.

Starting off, Thomas Edward Patrick Brady Jr. was born on the 3rd day of August 1977 at San Mateo in California, United States.

He was the 4th of three children born to his mother Galynn Patricia Brady and to his father Tom Brady Sr (a businessman). 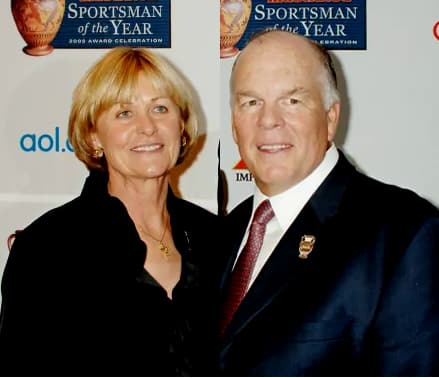 Regarding his family background, Brady is an American national of white ethnicity with Irish, Swedish, Norwegian and Polish roots.

Growing up in San Mateo alongside his parents and three elder sisters, Maureen, Julie and Nancy, young Brady was introduced to American Football by his sports-loving parents who were supporters of San Francisco’s 49ers.

The young boy who was often carried along by his parents to watch football games participated actively in the sport during weekends by playing competitive football with his sisters. 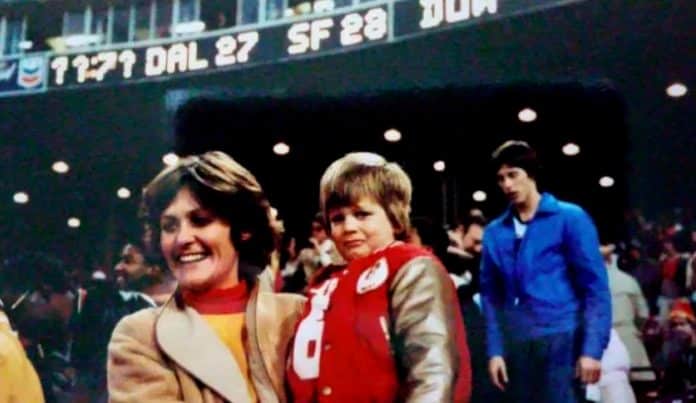 It wasn’t long before he also became a die-hard fan of San Francisco 49ers, found a football idol in the legendary quarterback Joe Montana, and attended a football camp where he was trained as a quarterback.

Added to Brady’s childhood sports were basketball, baseball and most importantly, golf a sport that highlighted how much he hates to lose.

“I can’t tell you how many golf clubs I broke as a 10-year-old. Every time I hit a bad shot, I’d try to break my club. I once busted our TV with a video game.

I threw the remote through the screen. Every time I’d lose, I’d just throw a fit. That was me growing up. I guess it’s still the same.” 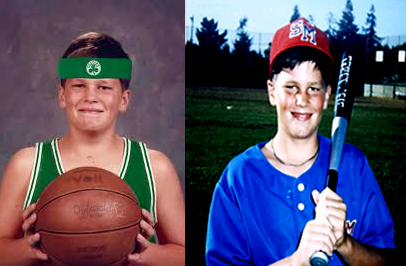 While at the high school, Brady began playing organized football when he was in the ninth grade, an activity that continued till his graduation in 1995.

Upon graduation from high school, Brady was drafted by the Montreal Expos to play baseball. The youngster, however, declined the offer by accepting a scholarship to the University of Michigan in 1996.

It was at the university that a 19-year-old Brady recorded an average start in football by spending more time on the sidelines than on the football field.

This was due to the fact that he was the third-string quarterback during his first two seasons at Michigan.

Brady, however, utilized the time by memorizing the team’s playbook and working hard on his game.

Consequently, he became Michigan’s starting quarterback in 1999 and not long after, helped his team to an Orange Bowl Victory.

The victory coupled with Brady’s track record of performances that season made Brady a name to conjure with in the role of quarterbacks and brought him to the closest point of professionalism.

2000 was the year which Brady turned pro after being drafted by the New England Patriots. Once again he found himself bedevilled by sidelines where he stood until Patriot’s starting quarterback, Drew Bledsoe, was injured in 2001.

Bledsoe loss became Brady’s Gain as the latter cashed in on the opportunity by not only leading the team to a great victory over St. Louis Rams at the Super Bowl XXXIV but becoming the youngest player ever to be named Super Bowl MVP!. The rest, as they say, is history.

Brady is a married man who exchanged vows with his present wife long after a failed relationship with another woman. We bring you details about the previous and present relationship.

First was his relationship with model and actress Bridget Moynahan. The Estranged lovebirds had an intense relationship for two years during which they were seen by many as inseparable pairs.

Unfortunately, they suddenly called off their romance in December 2006. Months later Bridget realized that she was pregnant, an outcome which didn’t come easy for Brady as he had already begun a relationship with his present wife Gisele Bündchen.

Notwithstanding, Brady’s first son John Edward Thomas Moynahan was given birth to in 2007 and the ex-lovebirds remained estranged. 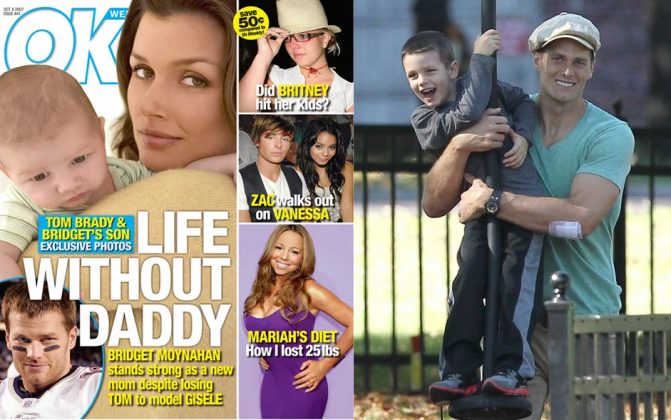 Moving on, Brady built on the foundation of his relationship with Giselle who he met in 2006 when a friend set up a date between them.

The couple dated for almost three years before getting married in 2009. 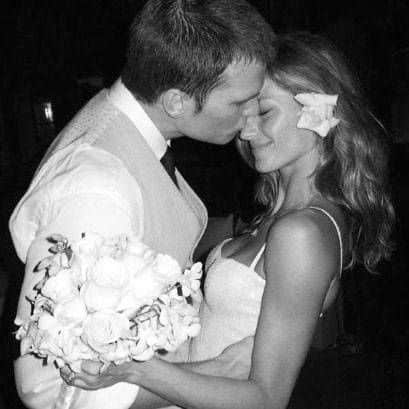 Their marriage is blessed with two children, Benjamin and Vivian. Giselle also plays the role of a stepmom to Brady’s son with Monahan’s. 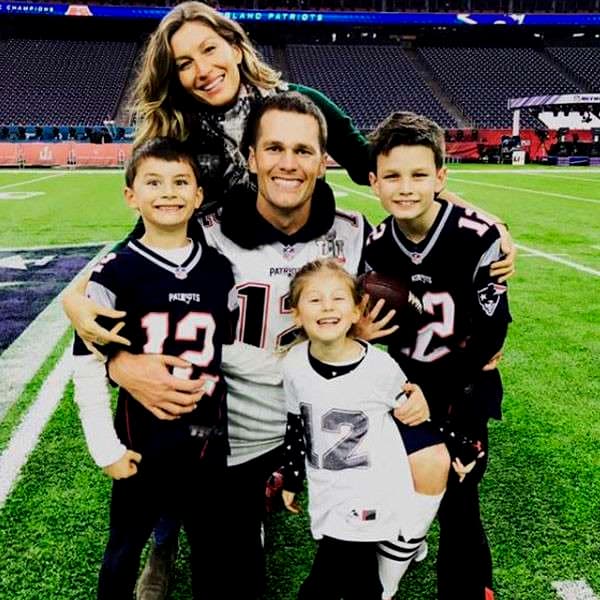 Brady was born into a family of six members we bring you details about members of his family.

Thomas Brady Sr is the proud father of Brady. He is a businesses man who owns an insurance firm called Brady and Sons. Thomas has always been of great support to his son who refers to him as his hero. 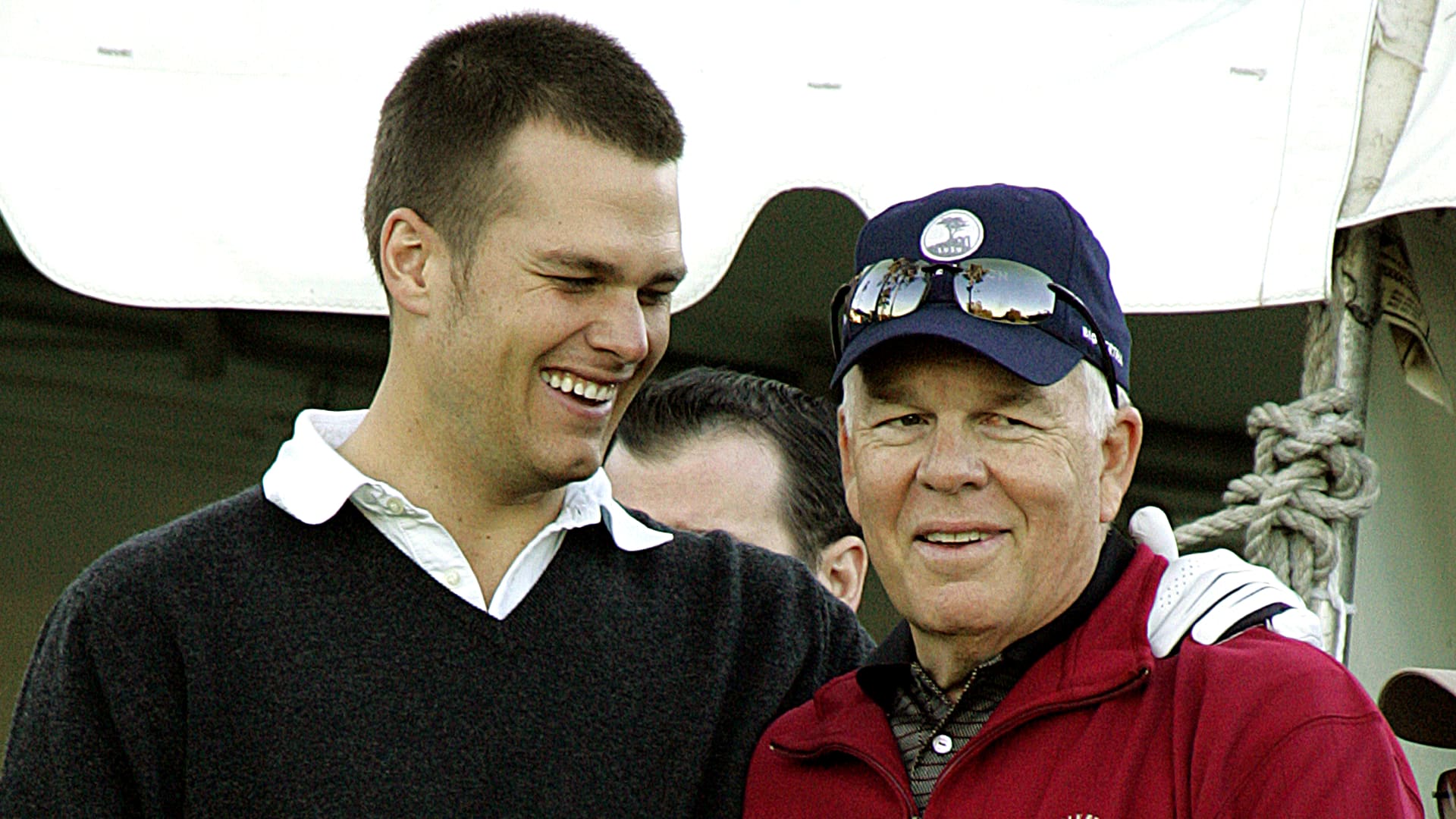 Brady’s mother, Galynn Patricia, has been married to Brady’s father for over 50 years. She is extremely supportive to her son and always put up appearances at his super bowl appearances.

Brady before one of such Super Bowl game, told spectators that he desired to win the game for his mother and he sure did. 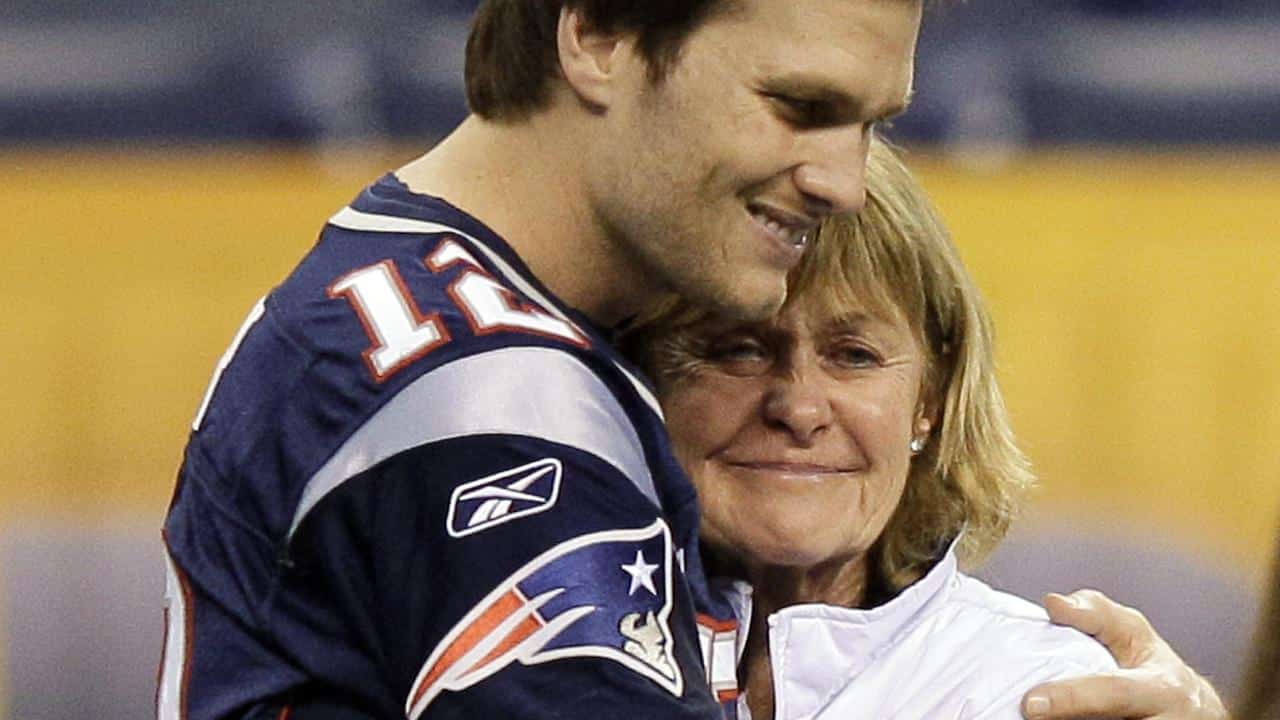 The outcome meant a lot for his mother who has been suffering a serious and undisclosed illness.

It would be interesting but not surprising to note that Brady’s sisters are all athletes.

Yes, not surprising. To think they played competitive football with Brady at some point. Where would you expect them to wind up?. Now here is what’s surprising.

Maureen is the oldest of the siblings and an excellent softball player who used to play for Fresno State. She is married with Kids. 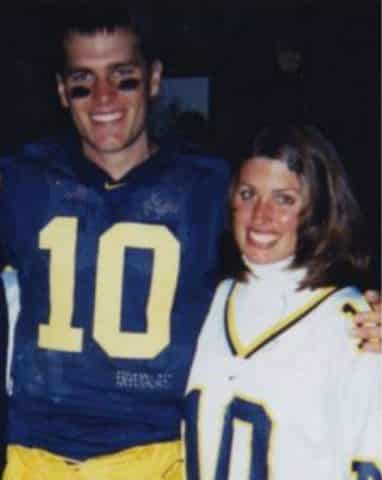 Next is Julie Brady, a soccer player for St. Mary’s college. 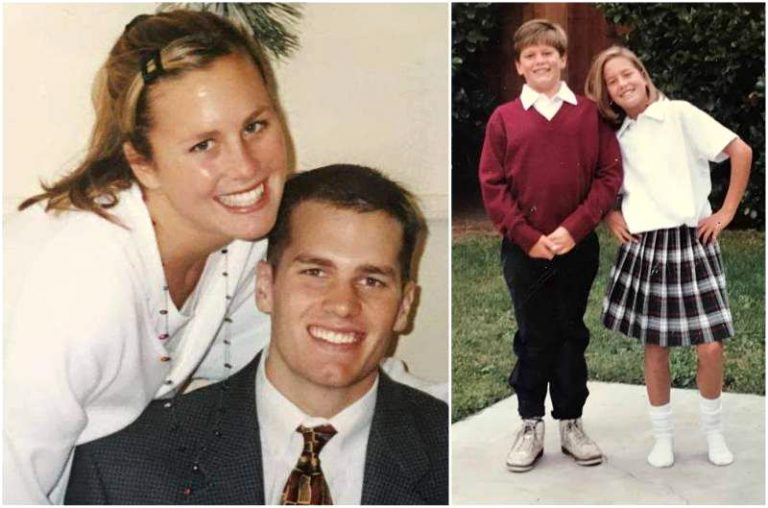 Last but definitely not the least is Nancy. She is a year older than Brady and a softball player who earned a scholarship to play for the University of California. 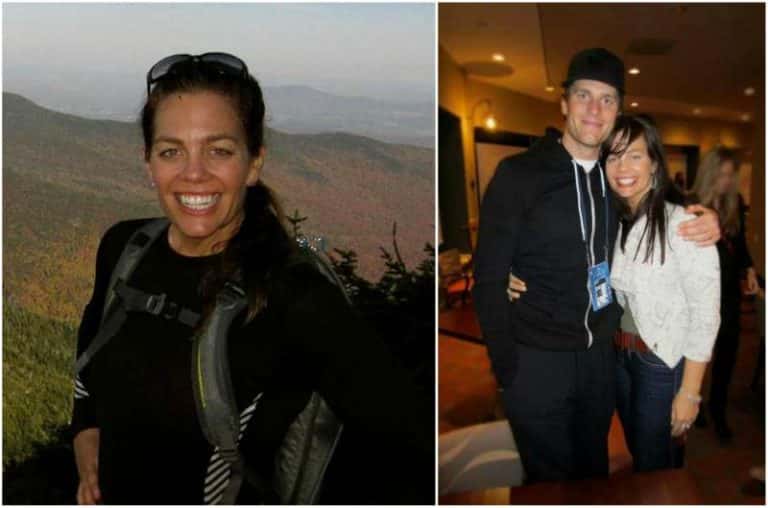 Brady has a nephew called Maya. She is the daughter of his eldest sister Maureen and plays softball as well.

Brady has Nicknames that convey information about his demeanour on football fields. The nicknames include those listed in the embedded Tweet as follows; Tom Terrific, Touchdown Tom, The Pharoah, Comeback Kid or Sir and The GOAT

However, Brady is not comfortable with being called GOAT which is an acronym for the Greatest of All Times.

Yes, Brady can be said to be the C. Ronaldo or Lionel Messi of American football considering the fact that he is one of only two players in NFL history to have won five Super Bowls, and he is the only player to have won them all with a single franchise.

His rejection of the GOAT only speaks volumes of his humility.

The reward for hard work In conventional and odd Jobs is more work. However, for football and other sporting endeavours, it is endorsements!.

Brady has his great share in endorsements which include those he signed with Armour, UGG, Tag Heuer, Intel, Shields, Movado, Choke Collar and Got Milk.

Others include those with Wheaties, Water and Helicopters, Water Parks, Peewee Herman Tattoos, Can Of Whup Ass and Awesome Sauce. Moving from endorsements, Brady owns a company known as TB12. Through the company, Brady runs a training centre situated at Foxborough. 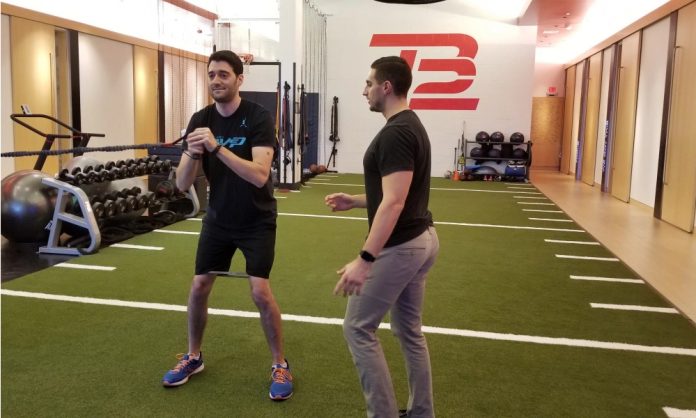 He has also released two best-selling books that give insights into lifestyle and strategies he adopted for prolonged success. They include “The TB12 nutrition manual” and “The TB12 Method: How to Achieve a Lifetime of Sustained Peak Performance”.

Brady is player whose lifestyle is filled with contrasts. To begin with, The beautiful faced player who was chosen as one of People magazine’s “50 Most Beautiful People” in 2002, married a Super + model but makes it a duty to be wary of paparazzi who he dislikes being around with of followed by.

At the peak of his career, Brady got embroiled in the notorious ‘deflategate’ incident that saw him suspended for the first four games of the 2016 NFL season.

Guess what?, Brady not only got his suspension overturned but went on to win Super Bowl LI and Super Bowl MVP that season. Where went emotional trauma and its cousins’ depressions & demoralisation?.

Like that’s not enough, the elite quarterback calls his teammates babes!. Speak of babes in this context, picture muscled men with enormous triceps, biceps with near concussed heads and husky voice. Here you go!.

Nonetheless, Brady is one who is endeared to many. Little wonder an elementary school teacher used his face on Crosswalk Signs to draw the attention of drivers who resultantly drive slow whenever they approach the school zone.

The yield to pedestrian sign in the crosswalk keeps getting hit on Walnut Ave outside the school. Maybe if Tom Brady is on the sign, people won’t sack him? #PutABradyOnIt pic.twitter.com/3hpTOThPHA

He is also a staunch believer of living in the present moment. Little wonder he’s already one of American football’s greatest.

At ChildhoodBiography, we strive for accuracy and fairness in our quest to deliver you the life story of NFL Players. Kindly stay tuned for more related articles here. You may find some interest in the childhood story of Patrick Mahomes, Julio Jones, Carson Wentz and Odell Beckham Jr.